“How can love change in three days?”

Dr. Julia Hoffman crouches down to examine the body of a man beheaded in the late seventeenth century. “No pulse,” she observes. “No heartbeat. No respiration.” This comes as a surprise, for some reason.

The doctor has been hypnotically press-ganged into surgically reattaching this body to its long-lost head, so it can rise again and wreak a terrible vengeance on its numerous enemies, real or imagined. This impossible medical intervention must take place in a crumbling underground crypt in the middle of the night, without the aid of electricity or common sense.

“At least now we know where we’re starting,” Julia says. “We have a great deal of work to do, before we can start the operation.” Yeah, you can say that again.

Just like yesterday, today’s episode has crypt scenes at the top of the episode and the bottom of the episode, and in between is the soap opera storyline, with people flirting and breaking up and talking about their feelings. Dark Shadows is divided into two pieces right now, like a severed head cut from its body, which they’re trying to join together using Krazy Glue made by actual crazy people.

They kick off the human-related part of the show with a lengthy scene about an elderly woman that we’ve never seen before describing the slow descent into madness and suicide of another character that we’ve never seen, so things don’t really get moving until Daphne shows up at Collinwood. This is fairly momentous, because Daphne’s supposed to be a major player in the supernatural horror that results in the destruction of the Collins family, which is currently scheduled for 1970, and we’ve been hanging around waiting for a whole month until she finally arrives.

This 1840 time trip is basically a prequel for the disaster movie we saw back in July, when Barnabas and Julia found the house destroyed and the family scattered to the winds.  There’s a lot that we don’t know about what led up to that catastrophe, but from what we could tell, the action in 1840 mostly took place in an upstairs playroom that is sometimes a much smaller broom closet, for reasons that have not been sufficiently explained.

The story involved a governess named Daphne and her beloved pupils, Tad and Carrie, who adored her more than their own families. The key villain of the piece was Daphne’s lover Gerard, an evil pirate who buried the undead bodies of his dastardly crew in the graveyard out back, ready at any moment to wave a green flag from the Collinwood tower room and signal the zombies to rise from their graves and burn the house down, presumably while he was still in it.

Well, this prequel’s been going for a month now, and it must have occurred to the writers that Daphne hasn’t met Gerard or even set foot in the playroom yet, and nobody’s buried anybody anywhere, so it would probably be a good idea to get these people together and start moving the plot along. We only have a hundred and thirty years until the catastrophe, and dollhouses don’t grow on trees.

Another fact from the future is that Daphne was madly in love with Quentin, her employer and intended rifle range target, and they’ve got a great deal of work to do before they can start that operation, as well. When she first met Quentin a couple weeks ago, she ended the episode by writing in her journal, “Tonight, I have finally met the man that I am going to kill.” That attitude doesn’t seem to have worn off one bit.

In fact, as soon as they show her to her room, she resumes the journaling. “At last, I am in his house,” she writes. “I must be very careful he does not know how near death is.” She really needs to stop writing that kind of thing down; it’s going to make life very difficult for her attorney later on. Then she picks up her Junior Miss .38 Special revolver for ladies, which she slips into her reticule and carries around the house, just in case somebody starts something. This is what happens when the president goes around saying we should arm teachers.

Now that they’ve finally got Daphne on property, it’s time to get Gerard into her life, so they need to wrap up his current love triangle. A couple weeks ago, when everybody thought that Quentin was dead, Gerard married Samantha, which made it extremely awkward when Quentin turned up at the house expecting his wife to not be married to anybody else. Because this is nominally still a soap opera, the guys agreed that Samantha would choose between them.

The question then was whether Gerard actually loved Samantha, or just married her for the money she’d inherit after Quentin was declared dead. It seemed for a while like his love must be sincere, because he still said he loved her after they discovered that Quentin was alive, and she wouldn’t inherit any money.

But now that Daphne’s arrived and Gerard’s romantic attention is required elsewhere, it’s easier for everyone if they just declare that he never really loved Samantha, and if that means his behavior over the last couple weeks doesn’t really make sense, then who really cares about sensible behavior? So that’s all taken care of.

I mean, if you wanted to construct your own head canon where Gerard really did love Samantha, but she broke his heart when she decided that she needed to stay at Collinwood for the sake of her son, then you’re free to do what you like, but really they just needed to move Gerard from one story thread to another, and that’s all there is to it.

Anyway, once that’s over, Gerard and Quentin are best friends again, and Gerard’s got a permanent standing invite to come to Collinwood and flirt with the help. The second that Daphne enters the room, Gerard starts in on a run of strange pickup lines that either he can’t remember how they go or they started out that way in the first place.

Daphne apologizes for interrupting, but Gerard announces, “Every door should be opened, and of course, you should open every door.”

Quentin chuckles, “He’s mad, don’t believe a word he says,” and then everybody pretends that meant something.

Quentin introduces the new governess, and Gerard takes her hand to kiss, saying, “Well, I am not very well educated, I do hope that I can join all of your classes.”

“Well, then I shall have to adopt a child,” Gerard grins, “and steal her from you.”

“No, no,” Quentin counters, “she’s going to be working here for so long, she’s going to become so fond of us, she’ll never want to leave.” This is what life used to be like for female employees, before Twitter hashtags fixed everything. 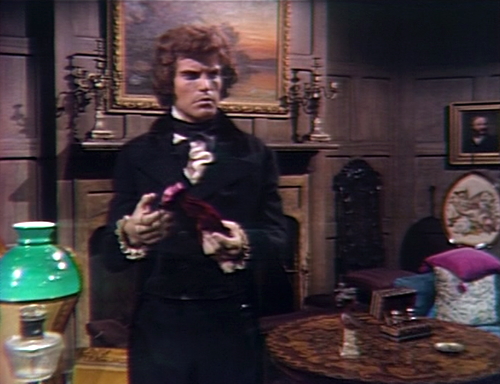 But the point is that Gerard is cute and flirtatious, and Daphne is a tough cookie who can take care of herself, which is a nice bit of high-speed screwball comedy characterization that only takes about fifty seconds to establish.

Then she leaves the room and Gerard notices that she left her reticule behind, which he instantly rummages through and discovers her pistol. Collinwood is kind of like a video game, where every time you end a conversation you get a new weapon and some experience points.

Eventually Daphne comes back into the room to retrieve her private arsenal, which cues up another meet-cute hostage situation. She grabs her bag, but he lets her know that he’s gone through her personal property and has opinions about it.

“What a remarkably modern-day woman you are,” he teases. “Carrying a pistol!” She turns, startled, and he explains, “Yes, of course, I went through it. I am shameless, and I do whatever I want to do.”

Stepping towards her, he says, “And I do want to know about you. That was the only way. Tell me, why do you carry it?” And now he’s touching her hand and looking into her eyes.

“That is none of your business,” she spits, and tries to turn away, but he grabs her arm and spins her back to face him.

“By hating me?” he smirks. “I think it would be far nicer to end falling madly in love with me.”

“Falling in love with you?” she says, shaking her head.

And I’m sorry, but that actually works on me. I know that technically we’re not supposed to be grabbing females by the forearm and announcing unwanted updates to their relationship status, but Gerard’s really cute and I guess I’m less evolved as a person than I’d hoped.

This is what the show needs right now, in the quiet moments between monster attacks — two good-looking actors with actual chemistry, being smart and shameless and sexy. We’re not getting that from Quentin or Samantha, I’m afraid, so it’s up to Gerard and Daphne to carry things from here.

Yes, I know that pairing these two means the fulfillment of the prophecy and the end of all things, but it’s not like we have a lot of other options. Somebody go and get me a green flag; let’s do this.

Mrs. Purdy loses track of a line: “I didn’t really become Joanna’s friend until after you stopped coming there. She was… I did become her  friend, then.”

When Quentin tells Mrs. Purdy, “I kept wanting it not to be true,” a shadow passes by on the wall at the top of the stairs.

When Quentin shows Mrs. Purdy out, he says, “Good evening.” She replies, “Good afternoon, Mr. Collins.” He frowns, puzzled, and mutters, “What?”

Mrs. Purdy is played by Camila Ashland, in her final appearance on the show. She played three characters in different time zones; the others were crazy bird lady Mrs. Hutchins in the Leviathan storyline, and crazy landlady Minnie Duval in Parallel Time. She also made an uncredited appearance as a party guest in House of Dark Shadows.