“It’s a terrible thing to be frightened by something you can’t see!”

#1. So let me get this straight. Gerard is a ghost, and he’s evil, and he’s in charge of young David, who’s being intermittently possessed by another ghost named Tad. Gerard has left a note in an old book that tells a crew of dead pirates to wait for somebody to wave a green flag three times in the window of the tower room of a mansion that Gerard is haunting. David reads the note and decides that Gerard wants him to wave the flag, which will magically raise this circle of criminals and misfits from the dead, to do Gerard’s dark bidding.

Then David goes upstairs to the tower room, and finds that there really is a green flag there which nobody has noticed for the last hundred and thirty years. The boy waves the green flag twice, which causes the dirt on the pirates’ graves to bubble and boil, but before anything interesting happens, David suddenly realizes that Gerard doesn’t want him to wave the flag after all, and the ghost expresses his displeasure by messing around with a theremin for a while.

I don’t know what happens to the flag, maybe it’s supposed to sit up there in the tower room for another hundred and thirty years. Wake me up when we hit 2099, so I have some time to prepare. 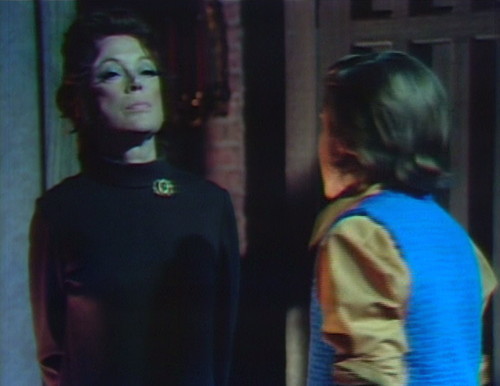 #2. Enter our hero, Dr. Julia Hoffman, arriving just after the nick of time. She doesn’t need to stop David from waving the flag / advancing the plot, because the soundtrack has already taken care of the problem.

But Julia has to make the scene better somehow, which in this case means asking pointed questions and making pointed facial expressions. She wants to know who David was talking to, a question that everybody is asking everybody these days, on account of secret ghosts.

“I’m getting out of here!” David says, as Julia checks the teleprompter.

She stands her ground. “No, you are not. Now, David, I know why you came here, but I don’t know what you expected to find.”

Julia checks the teleprompter again, and says, “There is a reason that you came here.” There isn’t, really, not as far as I can tell.

#4. There’s a shadow on Julia’s face, which is just about the worst thing you could ever do to Grayson Hall. She even tries raising her chin to catch the light, but there’s no light to catch; it’s a nightmare.

Also, David is being a storyline speed bump, just like everybody else on the show. In this scene, Julia’s working overtime as a smart character — she knows that David stole the note, she knows that he’s in league with the ghosts, and she’s figuring out more information about Gerard.

Unfortunately, she’s unsteady on the dialogue. First, she demands, “You must tell me everythings that’s been happening, right now!” And then she tells David, “The captain of the ship is the man who wrote this note, and his name was Gerard, wasn’t it?” It’s not her fault; it’s the light. She’s probably making a really good facial expression right now, and the audience can’t see it. How is anyone supposed to work under these conditions? 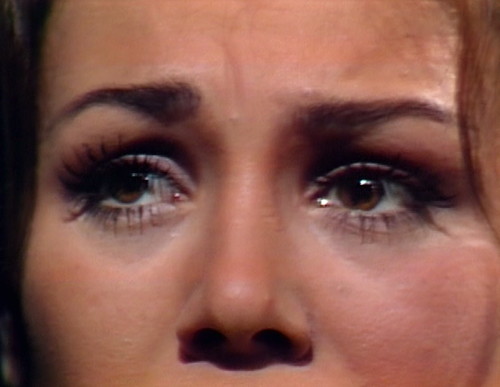 #5. Maggie is monologuing. “There have been times when I’ve felt a kind of presence in this house,” she confides, as Barnabas stands by and looks anxious. “It’s not something I can define, but it’s made me uncomfortable, even frightened me. It’s almost as if — like that feeling of being watched, without knowing who it is. I felt that presence in my room tonight, and that’s why I couldn’t sleep. I feel that presence here in this room, right now.”

And Barnabas watches her, and doesn’t say yes, that’s because we came back from the future, and there are ghosts who are trying to kill the children. As far as I can tell from this scene, Barnabas and Julia have decided not to tell Maggie about the ghosts, even though every other adult in the house keeps rolling their eyes and saying they’re sick of hearing about it all the time.

Also, they’re still doing the thing where they do a close up all the way up to the eyes and nose. If we get any closer to Maggie, they’re going to need to use forceps to pull us out again.

#6. There’s a close-up on the clock in the Collinwood foyer: it’s 9:30 in the morning. Maggie sees David rummaging through the desk, looking for paper. He pulls some blue notepaper out of the desk and hurries out, telling Maggie that he’ll be back before their lessons.

David goes to visit Sebastian, the local astrologer, to ask him to draw up a horoscope. “If it’s a question of money,” David says, pulling the blue notepaper out of his pocket, “I have forty dollars saved up.”

Sebastian barks, “Put that money back in your pocket, David!” David looks sheepish, and puts the blue notepaper back in his pocket.

So… did he wrap up the money inside the paper? Why did he need to get special paper for that? Also, the clock on the mantel says 7:45.

#7. Standing at the front door of Collinwood, Maggie accepts Sebastian’s offer to go to dinner tonight. From a shot of Maggie’s smile, we fade to a picture of Collinwood on a bright, sunny day. Then it fades to Sebastian’s house, and it’s nighttime. This may be a rare example of a disestablishing shot.

#8. When Sebastian gets back from his date with Maggie, he slams the door, which bounces open again. He tries to put his hand back to catch the door, but it doesn’t work. About ten seconds later, a studio light is visible. Also, the clock on the mantel still says 7:45. 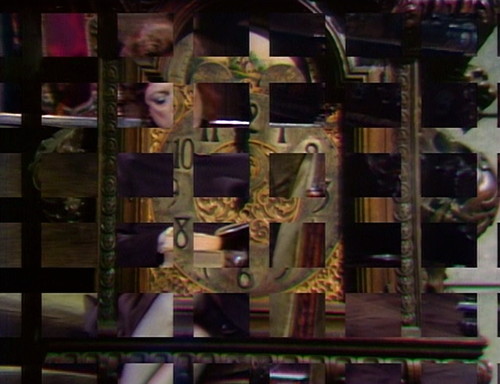 #9. There’s another unusual transition towards the end of the episode. They want to show that some time passes while Julia sits and reads in the drawing room, so they wipe to a shot of the foyer clock, as they often do. But instead of the usual fade, they do a matrix wipe, with the picture breaking into a grid of squares. They’ve never done this before, and I don’t know if they ever do it again. It’s nice that they’re trying to come up with some new visual tricks to keep things lively, but it doesn’t look very good.

#10. They started this episode with pirate zombies about to rise from their graves and destroy the world, which would be incredibly thrilling, and then they put the flag away and they just forget about it for another three weeks.

Barnabas mouth-mangles the line, “Maggie! I certainly didn’t expect to find you still up,” in a way that I can’t describe in text.

Maggie tells Barnabas, “It’s almost as if they’re doing the lessons for their own be– my benefit, not for their own.”

Julia tells Barnabas, “If you remember, she became — she almost became your victim, once before.”

At the end of Sebastian’s conversation with Maggie at the front door of Collinwood, he has about fifteen seconds to get over to the next set. After his last line, the shot stays on Maggie, and you can hear him hurrying away while she’s still talking to him.

Barnabas grouses that Sebastian is “either a charlatan, or a complete, deliberate liar!” That may actually be the correct line, but if so, it’s a very silly line.