“Why do you keep insisting, despite the fact that there’s no evidence, that Maggie was kidnapped or something?”

New Stokes says he’s stolen some life force, but who hasn’t, right? Barnabas drinks other people’s blood, Yaeger gets off on other people’s fear, and television exists to take your time and attention, and turn it into commercials. Now we find out that Angelique’s got a psychic hook-up that drains some rando in the back room. What’s the difference? 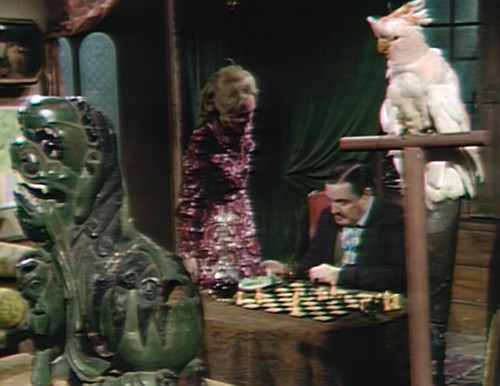 This version of Stokes is new on the scene, and he’s vividly retconning all over the place, starting with the set, which was crazy Aunt Hannah’s house a couple weeks ago. Now it belongs to Stokes, up to and including the stuffed cockatoo. He’s added some extra enlivening agents to the background, like a psychedelic blacklight horoscope poster and a big green Chinese lion statue, which indicates that he’s a mad scientist who’s discovered a way to defy death.

Another retcon: He’s Angelique and Alexis’ stepfather, which goes some way towards explaining how you could have a Jewish-Italian gypsy aunt with twin blonde bombshell nieces. I don’t know who Angelique’s bio parents were, but there’s no time to waste worrying about the details. We’re leaving Parallel Time today, and nobody’s even packed. 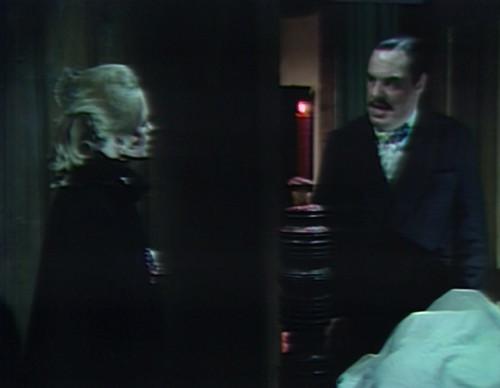 So let’s transition to the next retcon, which is that Angelique returned from the dead thanks to her father squeezing the life force out of a lady in the back parlor, who’s lying under a sheet and staying alive somehow, without the benefit of food or exercise or even a first name.

“Life force” is a term used by science-fiction writers and New Age quacks to explain things that don’t need to be explained, for example: why does Angelique feel the icy chill of death every once in a while, and why does she have to top up on life force by draining whatever dude crosses her path? This is a question that doesn’t need to be answered, because the metaphor is perfectly understandable already. Everyone in the audience can whip up a quick mental model for that; we did it weeks ago. But now there’s this extra lady, over at Stokes’ place.

This whole scene is just one midi-chlorian after another, leading up to the most unnecessary explanation of all. Angelique is worried about someone waking up the life force lady, and Stokes says, “I’m afraid you’ll have to trust me. After all, I granted your fondest wish, I gave you complete control of Quentin Collins. You owe your father a debt of gratitude, am I right?”

Which is — what? Why would she need complete control over Quentin? She married him and moved into his house, but we all figured that she accomplished that by being gorgeous and intelligent and seductive. With her looks and personality, what kind of assistance could she possibly need? 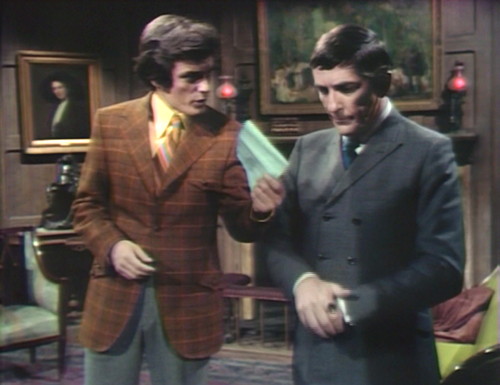 But there’s no time to worry about that! Maggie is missing, and Barnabas is desperate to find her, so he’s standing around in the Collinwood drawing room yelling at Quentin, instead of looking for her. It must be an urgent situation, because why would they be shouting ridiculous things if it wasn’t vitally important that they do so?

“Barnabas, here’s the letter, she wrote it herself!” Quentin cries, waving the letter in his guest’s face.

Barnabas is unfazed. “Isn’t it possible that someone could have forced her to write it?”

And Quentin yells, “Why do you keep insisting, despite the fact that there’s no evidence, that Maggie was kidnapped or something?”

He really does say that, kidnapped or something. Quentin Collins doesn’t sweat the details. 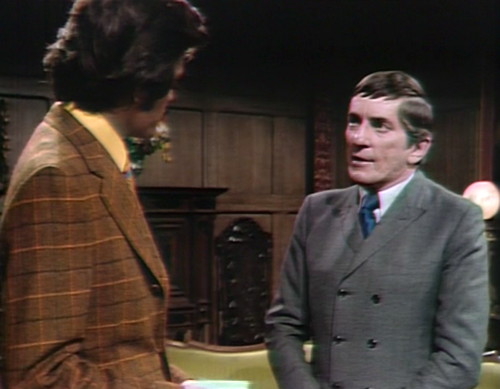 But Barnabas is lost, adrift in a hostile time band, and so are we, for one more day. He’s the only person in the entire show who can put two and two together, surrounded by nitpickers and naysayers, and all he can do is scream.

“How did she leave?” he challenges. “Is one of the cars missing?”

Quentin shakes the magic letter, which is his answer for everything. “This letter was mailed at Collinsport,” he thunders, “so she must have got there!” He takes a breath. “Which means…” — he looks at the letter again — “… that she did get there, somehow.” He smiles sardonically. “And I don’t think she walked to town, do you?” he continues. “But the fact is she got there, so she must have some way of getting there.”

So there. Just try and poke a hole in that logic; it’s inescapable. 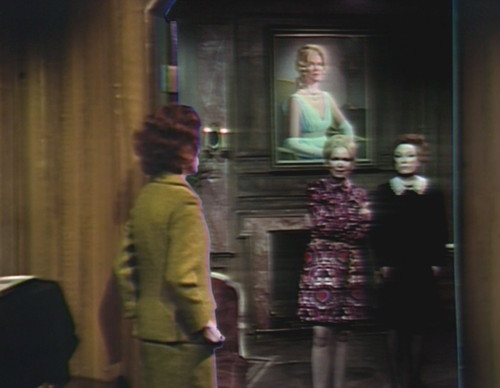 But there’s no time to waste, and here’s Julia, actual Julia, from the actual ABC-TV afternoon offering Dark Shadows, out in the hall in the east wing in the middle of the episode, just standing there, watching and listening and waiting for her chance. Using the power of pretape and Chromakey, Julia is amongst us again, eavesdropping on her doppelganger with rising alarm, and she tries to push through to that room, for Barnabas! The wicked women on the other side of the aisle say that Barnabas has powers, a secret, a way to be destroyed, and Julia’s got to help him, to find him, she’s got to get through to that room! 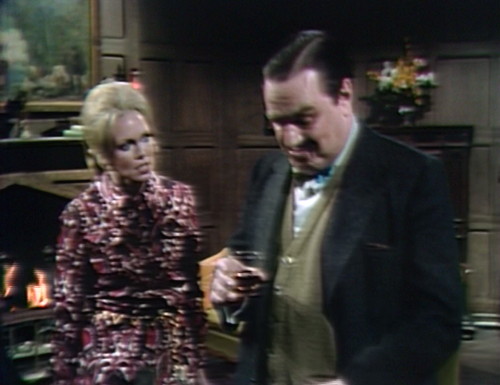 But there’s no time to waste! Stokes is in the house now, helping himself to every drink he can get his paws on. He pours himself three drinks in the course of a three minute scene, because he knows that Julia’s lurking in the rafters, and the days of the parallel are drawing to a close.

Angelique natters on about her plans, which don’t make sense and don’t matter. I’ve stopped listening to her for the most part, but she seems to be complaining that if Stokes hangs around the house, it would make people suspicious that she’s not her twin sister Alexis, but if she doesn’t want people to think that Angelique has returned from the dead, then why does she keep gaslighting Maggie into thinking that Angelique has returned from the dead, which she has? 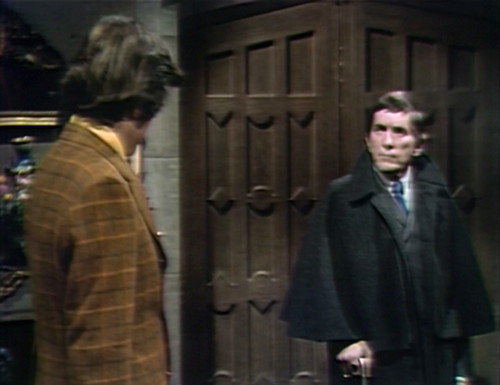 And then here’s Barnabas again, returning to the house specifically to criticize Quentin for hanging around the house. The grandfather clock says it’s 4:53, and that must be in the am because Barnabas can’t stand the pm, so Quentin must spend the wee hours pacing the house with a tie and a jacket on.

“Barnabas, why do you insist on forgetting one thing?” says Quentin, and Barnabas just keeps on forgetting it. “I’d be willing to believe this, if I thought that it had any sense, but it doesn’t!” he says. And then he turns and leaves the house for another lap around the front yard. 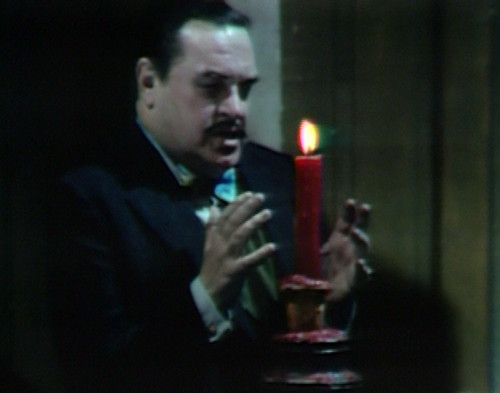 And meanwhile Stokes is talking things over with a candle he found burning near the lady in the back parlor. “In this moment, I unite my will with your will!” he says, uniting his will. “My life force, with your life force! Together, let us gather strength and power! Let us try to recall what is gone!” What is he talking about? Who is he talking to? What the hell is going on? 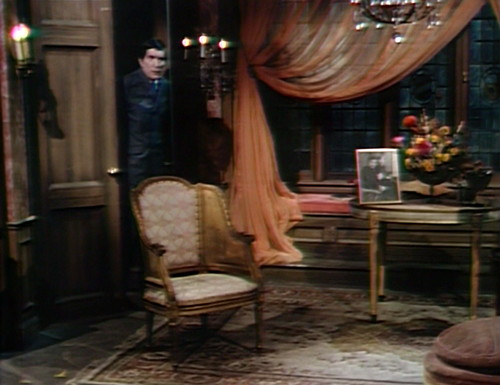 But we’re rounding the turn and sprinting for the finish line, plot hurdles be damned! We’re getting out of this mess and nothing’s going to stop us, not even common sense and basic scene-to-scene continuity. We last saw Barnabas with his coat and cape at precisely 4:54, dashing through the doors in an urgent search for Maggie, and now here he is, inside the house, breaking and entering, coatless and capeless. He’s back! And not a moment too soon. He’s rummaging through the room, peering in drawers and examining the couch cushions, because Maggie is missing even more than ever before, she’s shrunk shrunk shrunk down to microscopic size and she might be literally anywhere. We’ve got to find her, we’ve just got to! Before she gets down to the subatomic level, and we lose track of her completely. Hurry, Barnabas! Hurry! 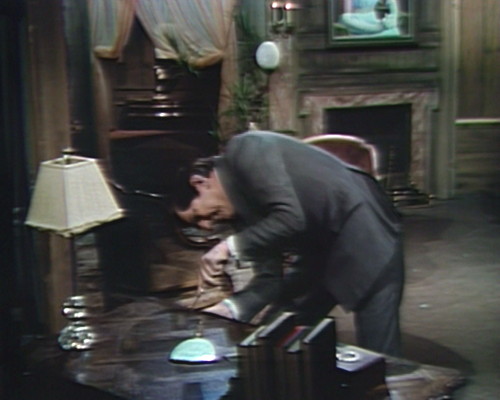 And Barnabas rummages, gathering strength and power, uniting his will with our own. Maggie’s not missing, just gone, she’s escaped, and she’s pointing the way, the route straight out of this parallel hell, where everyone shouts and nobody gets anywhere! We don’t know how she did it, but the fact is she got there, so she must have some way of getting there, and all you need to do is crack this drawer open, and find whatever it is you can find. 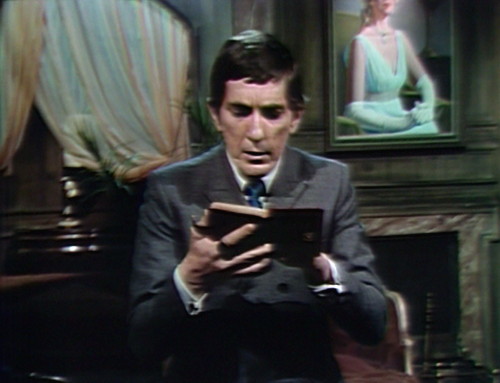 It’s a diary, that’s what he finds, it’s Angelique’s diary, which she wouldn’t keep and he couldn’t know about, they’ve never mentioned a diary before, but it’s here in his hands, and he flips through the pages and finds what he’s looking for. “He says he knows a way to circumvent death!” says the diary, and there it is, the last clue to the last piece of the last puzzle, we’ve found it at last! It doesn’t make sense, but then sense doesn’t matter, the one thing that matters is getting you home. 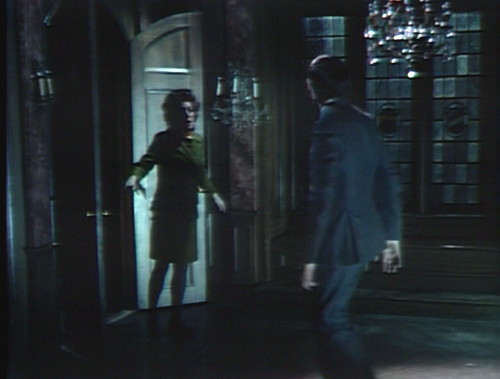 You did it, Barnabas! You found the way back! You’re home, you’re safe, it’s over!

Parallel Time is over!

Tomorrow: The Curse of Blinovitch.

The lighting is too dark in the teaser; Stokes and Angelique perform the scene mostly in shadow. The scene they’re repeating from Friday’s episode was much brighter. The whole episode is darker than usual, but it’s most noticeable in the teaser.

In the teaser, Angelique trips over her lines: “If someone — if someone helped you to bring me back to life, perhaps they know the w- — the key to stopping this terrible cold! Take me to m- to whoever, whomever it is!”

The “she got there, so she must have some way of getting there” moment is amazing, especially because it’s obvious that Quentin knows what a mess he made of his lines, and he’s trying not to laugh.

When Julia approaches the Parallel Time room, we can see the edge of the set on the right.

In the hall outside Angelique’s room, we see the picture hanging at an odd angle, to demonstrate that we’re seeing Julia from our own time band, where the east wing is deserted. In act three, Barnabas walks through the Parallel Time version of the hall, but the picture is still crooked, and there’s a chair piled up on some other furniture.

In the credits, Lara Parker is credited for playing Alexis, instead of Angelique.

Tomorrow: The Curse of Blinovitch. 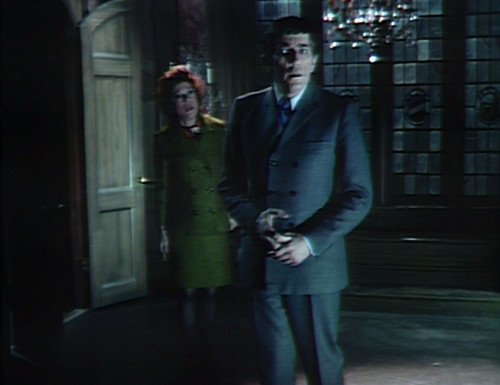