“What happened to you wasn’t the work of any form, or spirit.”

Dr. Cyrus Longworth, who isn’t that kind of doctor, enters Quentin Collins’ hospital room with a worried face and a clipboard. Earlier in the day, Quentin suddenly collapsed with agonizing chest pains that felt like he was a clay doll in the hand of an enormous crazy person, who was sticking a sharp pin into his heart. After about an episode, the pain suddenly ceased, and Quentin felt fine, as if nothing had happened, which I suppose technically nothing really had.

Unnerved, he went to the hospital for tests, which have turned out to be even more unnerving.

“The tests have proved most fascinating,” says Dr. Longworth, who seriously is not this kind of doctor.

“What is it?” Quentin smiles. “Don’t tell me I have some hitherto undiscovered tropical disease.”

Cyrus grimaces. “Well, if you had, I would have known what to do.”

“What are you talking about?”

Cyrus gives his friend a grim look. “Quentin,” he announces, “there’s nothing wrong with you!”

Quentin is thunderstruck. Naturally, this is the last thing he wants to hear. He’s a soap opera character stuck in a storyline that refuses to turn over, like a car that’s been out in the snow too long. If he’s not sick, then he has to find somebody else to talk to, and they don’t have time to dress another set.

“You must have made a mistake,” he says.

“Oh, no,” Cyrus declares. “No mistake has been made. You are in perfect physical condition!”

Quentin refuses to believe it. “Cyrus, you saw me last night. I was in extreme pain! I was barely able to breathe!”

“I’m aware of that,” Cyrus says, clutching the clipboard. “But these tests don’t lie. You are in perfect physical condition, you are in sound health!”

That’s two perfect physical conditions in the space of two lines, so those really must be some amazing tests. It sounds like Cyrus had a consultation with Donald Trump’s personal physician. “Mr. Collins had a complete medical examination that showed only positive results,” says the statement, written on a paper towel with grape jelly stains and released to the media. “If elected, Mr. Collins, I can state unequivocally, will be the healthiest individual ever elected to the presidency.”

Quentin tries to figure out where this is going. “Did the report say anything about my mental condition?”

“Well, mentally, you’re just fine,” Cyrus says, which sounds like they consulted a barometer. “You’re as well balanced as anyone I know.” This is not actually very reassuring. As Quentin is well aware, Cyrus’ social circle is composed entirely of knaves, ne’er-do-wells and lunatic lab techs.

“Now, Cyrus,” Quentin complains, “a man does not have an attack for no reason at all. There’s got to be a cause! Either it’s got to be mental or physical.”

No, he doesn’t say that, but I wish he had. His actual answer is even less convincing.

“Now, the symptoms appear to me,” Cyrus waffles, “the way the attack came upon you so suddenly, the way it appeared without any reason whatsoever,” he continues, “without any warning, that this must have been caused by something.”

Now, on this show, obviously, that should be the least surprising thing that anyone has ever said. Quentin and Cyrus have discussed supernatural phenomena practically every time they’ve seen each other, including the night they decided to burn Quentin’s dead wife’s body because they were frightened of it.

And yet Quentin still makes a face, and says, “Cyrus, I’ve heard some surprising explanations, but that beats them all!” I guess these old tropes never really die, especially not if you can squeeze a commercial break out of it. “What do you mean by supernatural?”

“Well, you’ve got to be!” Quentin declares, as if Cyrus has the entire Monster Manual written on his clipboard and refuses to admit it. “Do you mean a ghost? Some unseen force, what?”

“No, no,” Cyrus says, sinking into a chair. “What happened to you wasn’t the work of any form, or spirit.”

Cyrus furrows his brow. “These symptoms are very similar to those resulting from the practice of black magic — and witchcraft!”

Another incredulous face from Quentin. He says, “Witchcraft?” as if he’s not talking to a character whose backstory explicitly includes a lifelong semi-academic interest in witchcraft, but I guess today we’re pretending that he’s a doctor.

“Well, you believe in the existence of ghosts,” Cyrus points out. “Why not witches?”

“All right, all right. Now, you just tell me how this attack occurred.”

“There are any number of methods used to practice black magic,” Cyrus says, so here we go.

“A crude doll figure representing the likeness of the victim is probably the most common,” says the doctor. “Pins can be stuck in the doll, and the victim feels intense pain!” He shudders, clutching the clipboard. “I saw a man die like that, in a village in Africa!”

Which is — wait, what? When were you in a village in Africa?

“They use other methods, too!” Cyrus says, flashing back to his Peace Corps days. “Potions, other things, the casting of spells…” Of course, it’s the other things you really have to watch out for. 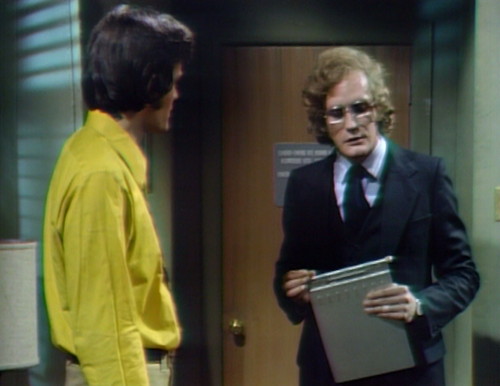 “Cyrus!” Quentin yelps. “Now, what you’re telling me is that my attack was not caused by a supernatural being — but was caused by a real person!”

“I find it all very hard to believe,” Quentin says. “Who could it be?”

Cyrus folds. “I have no idea.”

Which is just silly. Both of these characters are acquainted with several people who play with black magic on a regular basis. Cyrus is one of them. Honestly, sometimes I wonder if these people even pay attention to what they’re saying.

“Cyrus, do you think that it could be somebody close to me?” Quentin asks, although obviously this isn’t really a question that a medical examination could answer. “Somebody who lives at Collinwood, perhaps?”

“It could be anyone!” Cyrus shrugs. “But there’s no point in speculating about who it is.” It’s called bedside manner.

“It’s late now,” the doctor says. “I think you’d better get some rest.”

“Do I have to stay here tonight?”

“No, no. Of course not,” Cyrus purrs. “You just get your clothes on, and go right on home!”

But I already have my clothes on, Quentin thinks. So what now?

Tomorrow: Peer at a Prop.

When Cyrus tells Quentin that he’s in perfect physical condition, somebody in the studio coughs. Although they’re in the hospital, so maybe that was just atmosphere.

Barnabas asks Maggie, “Did Quentin really love Josette?” Maggie frowns, puzzled, and then she smiles, “I think he loved Angelique.”

Maggie announces, “My instincts tell me that this woman would do nothing to keep from getting rid of me!”

This is the first episode with the credit: “Miss Scott’s clothes courtesy of Junior Sophisticates”.

Tomorrow: Peer at a Prop.