“Just come, and bring all your amulets and herbs!”

Anyway, this is Parallel Quentin talking to Non-Parallel Barnabas, the dimension-hopping vampire crossover artist who came to this uncharted Collinwood accidentally on purpose and can’t figure out how to leave. Quentin and Barnabas have been in the east wing, taking a peek through the veil, and they saw some Regular Time people discussing their Regular Time concerns, like where do you think Barnabas went.

Quentin’s been mulling it over all the way downstairs, and by the time they hit the drawing room, he’s ready to deliver his verdict: Barnabas is the Barnabas they’re talking about in that room. Obviously this is the case, because the multiverse is big enough to hold several Brunos and anywhere up to five Sabrinas, but the good Lord only made one Barnabas.

But Barnabas decides to bluff it out, because they still haven’t developed the technology to determine whether somebody’s Parallel or not. He says that he’s not the Barnabas from the room, and Quentin’s just going to have to take his word on that. So Quentin shrugs and says okay, but it’s a weird coincidence, and Barnabas says that it certainly is. And there you have it, a pleasant and perplexing slice of afternoon television that accomplishes nothing of consequence.

So at this point I feel obliged to remind you that this is a horror story about a dead woman returned to life, a reckless revenant who got woke thanks to some body temperature stolen from the living. When she feels the chill of the grave, then it’s time for another sacrifice, sucking all the heat out of somebody in order to perpetuate her blasphemous existence. But she hasn’t done that in a while, and nobody’s mentioned it, so I guess at the moment it’s fine.

I also feel obliged to remind you that this is a murder mystery story about that same ghoul, who was murdered with a hatpin six months ago, and she wants to know who done it so that she can do it right back to them. So far the list of suspects is essentially nobody, and there are no motives and no clues.

And finally, I feel obliged to remind you that this is a love story about, yes, the same dead lady, still desperately in love with her husband, who remarried while she was dead, without asking for her permission. She either wants to remarry him or murder him, or possibly both. She hasn’t been super clear on that.

I feel obliged to do all of this, because the next thing that happens is that Angelique walks into the drawing room with an armful of flowers. 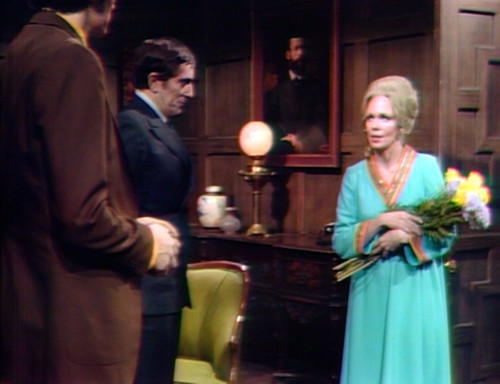 So: really? For some reason, they’ve decided that Angelique has this insatiable interest in botany. They made a big point about it with Alexis, because it was supposed to be a clue that Alexis was Angelique, but then they said no, Alexis is interested in plants too, so maybe it’s Alexis, which it was. But now that Alexis actually is Angelique, she’s still interested in plants, which means that she’s constantly gardening, rather than doing something to advance any of her three stalled storylines.

I mean, yeah, it brightens up the sets, and it’s fine if they want to give people some non-plot-related character traits, but at a certain point, you want the character to knuckle down and remember that she’s a terrifying unstoppable succubus hellbeast, and maybe dial back on the extracurricular activities.

Anyway, Angelique says that a package arrived for Quentin from Paris, and the butler put it in the study, which is not the kind of “the butler did it” moment that we’re looking for, at this stage of a murder mystery.

So Quentin says, “Barnabas, will you excuse me?” and Barnabas says, “By all means, I must be going myself,” and then Quentin leaves the room, and Barnabas doesn’t.

Instead, he hovers around Angelique’s airspace, while she continues to mess around with flowers, and they have an extremely Dark Shadows discussion.

Angelique:  I was born right here, in Collinsport.

Barnabas:  Now that you’re back, do you plan to stay?

Angelique:  Quentin has asked me to, temporarily, and I’ve agreed to. Why?

Angelique:  Now, why should you be curious about me? You only met me this evening.

Which is par for the course, really, in Collins family conversation. This is how Barnabas flirts.

Barnabas:  I was wondering if your presence here indicated that — well, that Quentin had gotten over his wife’s death.

Angelique:  Or that he wanted me here to remind himself of her?

Angelique:  Well, I’m afraid that both of your guesses are inaccurate.

Also, what are you talking about, and how is this your business? she doesn’t say, and then she keeps on fussing with the flowers.

Once Barnabas finishes talking and actually leaves the room, the camera lingers on Lara Parker, who has to come up with an appropriate facial expression and has been given precisely nothing to work with. So she kind of looks off into the distance and flickers her eyebrows, as if to say, I might be feeling something about that conversation. But what?

Meanwhile, Barnabas goes out onto the front porch and turns into Chromakey, for a brief thinks monologue.

“Is she really Alexis?” he wonders. “Or is she the Angelique I know? I must find out about her… soon!”

And then he changes the subject, because that doesn’t actually make any sense. This is clearly not the Angelique that he knows, and he doesn’t need to find out about her, soon or otherwise. This is local politics, there’s no reason for Barnabas to get involved one way or the other. So this raises an interesting question, which is: Is Dark Shadows Doctor Who?

Because this is a moment when Barnabas may be adopting a new role in world affairs. He’s stranded in Parallel Time, cut off from his friends and family in his home dimension. But at the moment, nobody in Parallel Time is giving him any problems, and all he needs to do is figure out how to pass through the time barrier and get back home. Whether Alexis is Angelique or vice versa is not germane.

So that’s why I’m asking: is Barnabas the Doctor? Does he feel the need to solve other people’s problems, in whatever time and place he happens to land? I mean, he’s been sticking his nose into lots of things for a while now, but usually it’s related to some personal dilemma like how do I get Quentin to not kill my friends or how do I get the Leviathans to leave my dead girlfriend alone. In this case, the Angelique/Alexis question has no connection to anything Barnabas cares about, and the only reason he’s concerned about it is that he’s the main character and he should probably get involved in the current storyline somehow. But nothing is really connected to anything at the moment, because Angelique can’t figure out what she wants.

Okay, back to Angelique, who invites herself into the study on a storyline fishing trip. Quentin’s got a mystery box from Paris, and she can’t keep herself away. “I couldn’t contain my curiosity!” she bubbles. “Whatever did you get from Paris?”

She’s smiling, and it seems genuine — she’s not on assignment right now, she’s just legitimately curious about Quentin’s mail. This is a nice, light moment that I would appreciate a lot more if there was anything else to contrast it to. What is she doing?

I know, I’m just hassling Angelique today, but this isn’t idle nitpicking. There is a fundamental question here about what the main antagonist on the show is actually trying to do.

What does Angelique want? Does she want to reclaim her old role as mistress of Collinwood? If so, then she appears to have a blank check, as far as living in the best suite in the house and carrying flowers around from one place to the other. If this is what she wants, then she has it, story over. 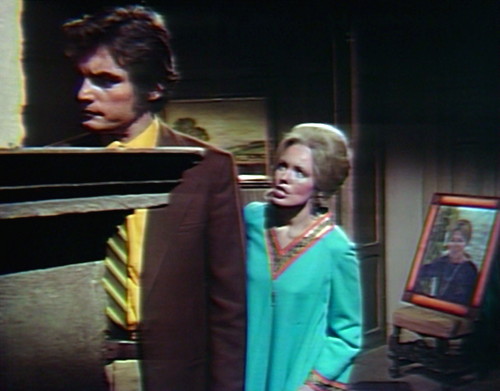 They finally do narrow down the options to a specific story point for the day, and guess what, it’s none of the above. She’s not a heat-sucking ghoul today, or a murder victim. She doesn’t want revenge on Quentin for choking her or burying her or whatever she’s angry at Quentin about. Instead, she’s running a therapy group for Quentin to work out his problems with Maggie, his runaway wife.

Quentin:  She wouldn’t answer my telegrams, she would never come to the phone when I called… What more can I do?

Angelique:  You can try again!

Quentin:  No, thank you.

Angelique:  Quentin, you can’t go on torturing yourself like this!

Quentin:  I’m not torturing myself!

Angelique:  Yes, you are! You think of no one but her, you miss her much more than you’re willing to admit!

And maybe he does, but he’s not going to call her, and it seems like he’s fine with letting things drift away, so who cares? Maggie’s not here. Quentin says he doesn’t want her. What is Angelique looking for here, and how will she know when she gets it? Also, how is this a thing that a dead person does?

But apparently we’re trapped in some kind of Erica Kane bad-girl double-agent shell game where Angelique pretends to be supportive so that she can tear her rival down.

“She’s all he thinks about!” Angelique complains to Aunt Hannah. “And as long as that’s true, I haven’t any hope of winning him back! As long as she’s in New York, I can’t fight her! I want her here, where I can deal with her!”

And then, believe it or not, she uses her amulets and herbs to cast a love spell on Quentin, forcing him to fall even more deeply in love with… hang on. What? 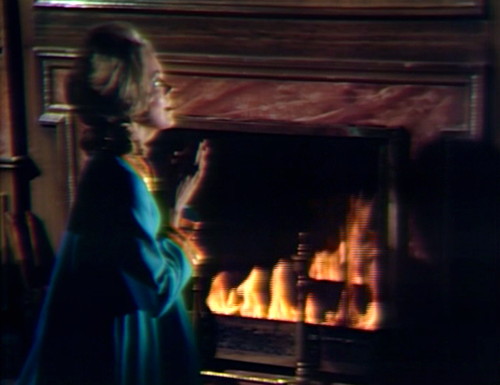 “You are deeply in love with Maggie!” Angelique cries, facing the firelight. “You can think of no one but her!”

And then, somewhere in the afterglow, Quentin receives her message and falls even more deeply in love with Maggie, which seems entirely counterproductive.

But, sure. Why not? Pull up a spell and cast away, Angelique. We’ll get somewhere, eventually.

Tomorrow: Are You the Quentin.

Barnabas asks Quentin what his first wife’s name is, but Quentin already told him yesterday.

When Angelique enters the drawing room carrying flowers, a crew member holding a script crosses behind her.

Angelique asks why Barnabas is asking questions, and he says, “Merely — mere curiosity.” A couple lines later, he repeats the phrase “mere curiosity.”

The music cue at the end of act 1 starts while Angelique is still speaking.

Angelique tells Hannah that they need mandragora for the potion. She pronounces it “man-dra-GORE-uh”; it’s actually “man-DRAG-uh-ruh.”

Angelique tells Hannah, “All I want is for the yon- the longing in his heart to force him to bring Maggie back here.”

When Barnabas hypnotizes Daniel, we can see the vampire’s reflection in a mirror.

The Ralston-Purina lamp appears again today, in the study, or whatever that room is supposed to be where Quentin talks to Angelique about Maggie’s portrait. We last saw the lamp a month ago, at Hannah’s place.

Tomorrow: Are You the Quentin.