“My guess is that the time band is always there, but one can only glimpse it through the warp.”

Then wear the gold hat, if that will move her;
If you can bounce high, bounce for her too,
Till she cry “Lover, gold-hatted, high-bouncing lover,
I must have you!” 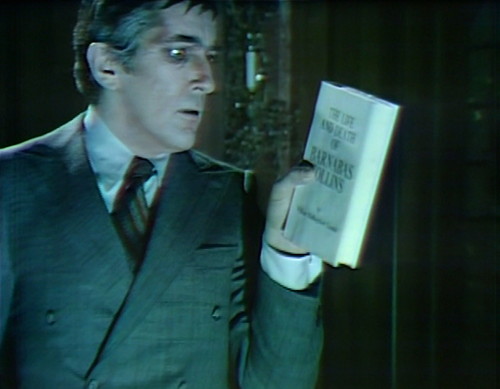 Eccentric millionaire Barnabas Collins is getting drawn to things again, which always means trouble. He’s found a space-time fissure in the east wing of Collinwood, which allows him to see his friends dressed up in different costumes and talking about different plot points, which comes as a tremendous relief, given the current state of affairs. In our world, we’re wrapping up the Leviathan storyline, a not-very-good idea that seems to be taking forever to die, but in this newly-discovered otherspace, there are new clothes to wear and new portraits to obsess over, and I am entirely in favor of it.

Barnabas can’t actually enter this second dimension, because of the Blinovitch Limitation Effect; all he can do is stand there and watch trailers for the upcoming storyline. But now, thanks to an unexpected crack in this crack in the universe, somebody chucks him a copy of the novelization.

It’s called The Life and Death of Barnabas Collins, written by one William Hollingshead Loomis, which is probably a pseudonym for Gardner Fox, the man who writes the world. 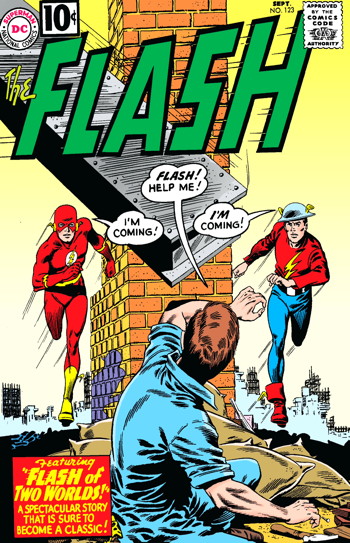 I don’t know if you’re familiar with the fantastic Mr. Fox, who wrote for DC Comics for more than thirty years. He created the Flash, Hawkman, Doctor Fate and the Justice Society of America. (He also created the Sandman, but not the one you’re thinking of.) All told, he wrote about 1,500 DC comic books from 1937 to 1968, and he was so prolific that there was even a fictional Gardner Fox, who wrote comic book stories from inside the comic books.

We found that out in “Flash of Two Worlds!”, a loopy 1961 adventure published in The Flash #123. In the story, Barry Allen — aka The Flash — climbs up a quickly-vibrating rope, and vibrates himself right out of the universe, and into another.

There’s a lot of vibrating in The Flash, that’s a thing we ought to just get out of the way right now. Apparently, you can’t fill 122 issues of superhero comics if the only thing your hero can do is run fast. I mean, there are only so many times you can carry something from one place to another before the comics-reading public becomes fidgety. So the Flash uses “vibrations” to do a lot of things, including — just in this issue — performing a Hindu rope trick, creating updrafts strong enough to make steel girders fly into the sky, spinning a cone of absolute darkness into a tornado-like funnel, turning a violin into handcuffs, and running through walls. Oh, and traveling to a parallel dimension, of course. I bet Barnabas wishes he’d thought of that.

In the new world, Barry finds himself in Keystone City — and, recognizing the name of the locale, he looks up “Jay Garrick” in the phone book, and then speeds towards Jay’s house. When he arrives, he explains to the dazed couple living there a few choice concepts from vibration science.

“The way I see it, I vibrated so fast,” Barry says, “I tore a gap in the vibratory shields separating our worlds! As you know, two objects can occupy the same space and time, if they vibrate at different speeds!” This is not actually the case.

Now, to make sense of this situation, you need to know a little bit about DC Comics history. In 1940, Gardner Fox invented the Flash, who appeared in Flash Comics. The lead character, Jay Garrick, was a Keystone City college student who inhaled some hard water vapors, and consequently developed the ability to run at superhuman speed. The Flash was reasonably popular in the 1940s, but people lost interest in superheroes after World War II. When the superhero crash came, DC kept Superman and Batman around, but they cancelled a lot of other superhero books, and replaced them with science-fiction and westerns. The Flash was one of the unlucky heroes who got canned in 1949.

In 1956, DC decided to give superheroes another try, and they brought the Flash back in Showcase #4. Instead of reviving the old character, they created a new version named Barry Allen, a forensic scientist in Central City who gets doused in chemicals struck by lightning, which also gives you super speed powers, go figure.

And so, in 1961, when Barry vibrates himself across the space-time continuum, he ends up in the parallel universe where Jay Garrick still lives — a little older and grayer, but still pretty speedy.

“My theory,” says Barry, because some people always have a theory, “is that both Earths were created at the same time in two quite similar universes! They vibrate differently, which keeps them apart! Life, customs, even languages evolved on your Earth almost exactly as they did on my Earth! Destiny must have decreed there’d be a Flash — on each Earth!”

But get a load of this. The reason why Barry recognizes the name Keystone City and looks up Jay Garrick is that in his universe… well, here, I’ll let Barry explain it.

“You were once well-known in my world — as a fictional character appearing in a magazine called Flash Comics! When I was a youngster, you were my favorite hero! A writer named Gardner Fox wrote about your adventures — which he claimed came to him in dreams!

“Obviously when Fox was asleep, his mind was ‘tuned in’ on your vibratory Earth! That explains how he ‘dreamed up’ the Flash!”

Now, we were just talking about that kind of declaration the other day. That’s a postulate, where the character says something preposterous, like “obviously, if we paint over Angelique’s portrait to make it look older, then she’ll actually become old and haggard and die,” and that turns out to be exactly correct. If a character sounds emphatic and nobody else objects, then they can come up with all kinds of lunatic plot contrivances, and the audience goes along with it, because otherwise we’d have to sit through even more vibrobabble.

So then Barry and Jay go run around outside and fight criminals, who they overcome by sticking diamonds in their ears and dancing to fiddle music. 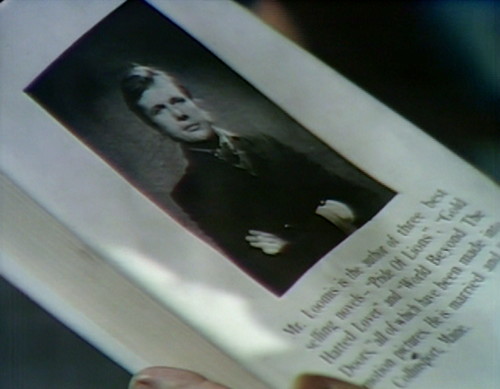 Meanwhile, Barnabas tries to make sense of the Keystone City edition of The Life and Death of Barnabas Collins, which was written by William Hollingshead Loomis, the author of the best-selling novels Pride of Lions, Gold Hatted Lover, and World Beyond the Doors, all of which have been made into motion pictures. This is tremendously exciting for Barnabas, who was hoping to break into the motion pictures business sometime this spring. 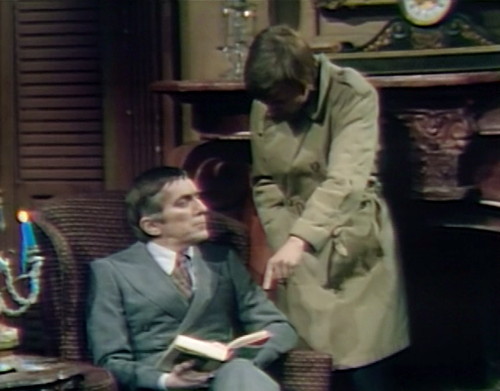 He brings the book home to Central City and shows it to Willie, who’s baffled. Barnabas tries to explain about the vibratory shields separating our worlds, but it doesn’t really take. Finally, he says, “Just try to conceive of the fact that there are other existences,” and Willie promises to try.

As Willie leafs through the confounding pages, Barnabas describes his alternate-universe counterpart, who seems to be completely unremarkable. “I was born in the eighteenth century,” he explains, “heir to the Collins lands. Rich in years, died in 1830. Grieved by his descendants, and most particularly, by my most loving wife Josette.” Why Mr. Hollingshead Loomis decided to follow the chart-topping World Beyond the Doors with this clunker is a mystery to all.

Still, Barnabas wants to read the whole book, and see if it contains more surprises. But Willie warns, “I wouldn’t look for any more surprises, they’re no good. I tell you, if I were you, I’d take that book right now, and I’d throw it away, I mean, I’d just burn it!”

Barnabas shakes his head. “I don’t think the problem can be disposed of as easily as that. Something exists — and I must understand it! And I will understand it, no matter what happens!” 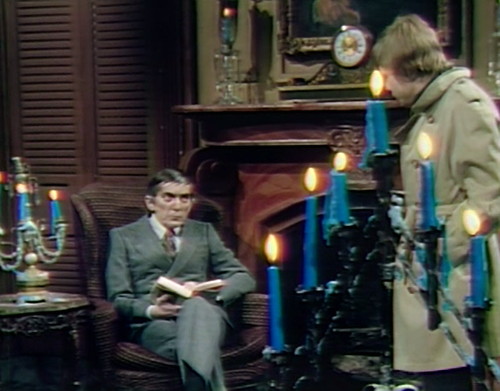 “All right, Barnabas,” Willie replies, “but don’t forget, I warned you!” Barnabas shoots him one of those you’re-interrupting-me looks, where you move your eyes but not the rest of your head. He is doubling down on this “Something exists” rationale.

But that’s the correct response, even if it doesn’t make what you or I might consider rational sense. There’s a new version of Dark Shadows taking place in that other time band, and it seems to have a different energy and pace, plus a new version of the ancestral backstory. We want to know more about the world beyond the vibratory shields, and Barnabas is leading the way.

This is why Barnabas is an excellent main character, because his interests so often align with the interests of the audience. With Barnabas as the driver and Gardner Fox as the navigator, we’re going to get to Keystone City, one way or another. 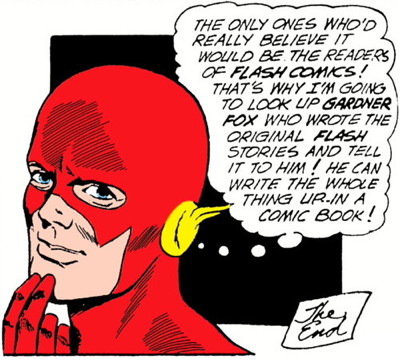 But here’s the thing about Gardner Fox, the multi-dimensional writer who creates narrative collisions with his own existence. At the end of “Flash of Two Worlds”, Barry tells his girlfriend Iris that no one would believe the story that just happened to him.

“The only ones who’d really believe it would the readers of Flash Comics!” he thinks. “That’s why I’m going to look up Gardner Fox, who wrote the original Flash stories, and tell it to him! He can write the whole thing up… in a comic book!”

So if Barry told Gardner Fox to write the story, which we’re presumably reading right now, about Barry reading Fox’s comics about Jay Garrick, then there must be another Gardner Fox in our world, writing the comics about Barry, which means that our own lives could be written by an even grander Gardner Fox, with further iterations expanding outwards in ever larger circles, across all known dimensions. At every level, in every possible world, a Gardner Fox to guide our destinies. It’s just Gardner Foxes, all the way up.

Liz loses her way in the middle of a line. Stokes asks if Carolyn’s marriage was sudden, and she says, “Sudden, precipitous, and…” A noticeable pause, and then, “stupid and rash.” She’s backacting and looking off screen the whole time, so it’s possible that she was reading off the teleprompter, which wasn’t going fast enough.

At the end of act 1, it takes a little too long for the camera to fade out, so we see Jeb head for the door — and then halt in place, as the dramatic sting plays.

Barnabas says to Stokes, “If I understand it correctly, the theory states that a person can be traveling down more than one time band simultaneously.”

Barnabas tells Stokes that in our time band, his ancestor left Collinwood in 1779, and never returned. He means 1797, probably. 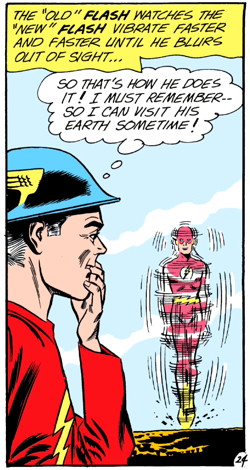