“As each moment goes by, you have less and less existence!”

Here’s newlywed Jeb Hawkes, the world-crushing god-emperor and inspiration for a thousand terrible RPG modules, tiptoeing gingerly into his hotel room. He sets down the suitcases, looks left, right, and left again, and finally summons up the nerve to turn the lights on.

This is how far he’s fallen — the mighty murderous man-thing, triumphant at last, shaking off the shackles of his Elder Things upbringing, and running away with the girl he loves… but feeling no joy. Instead, we see a timid man, afraid of his own shadow. Not the shadow he casts, naturally, nobody fears that except groundhogs. Jeb is afraid of the shadow that’s been assigned to him.

And here it is, that dreadful shade, casting itself on the wall and going boogley-boogley-boogley. That’s mandatory, by the way. If you’re watching the show, and the shadow doesn’t make that noise, then you’re required to do it yourself. Out loud. Every time. Boogley-boogley-boogley-boogley, the whole time it’s on screen. Try it, and see how satisfying it is.

This calamity is the result of a fiendish hex that Angelique put on Jeb, because he was tangentially involved in the entirely foreseeable train wreck of her second marriage. The witch cut a little shape out of black construction paper and placed it over Jeb’s heart, and that’s all you need to do, apparently. Unstoppable wriggling specter of death, set in motion. 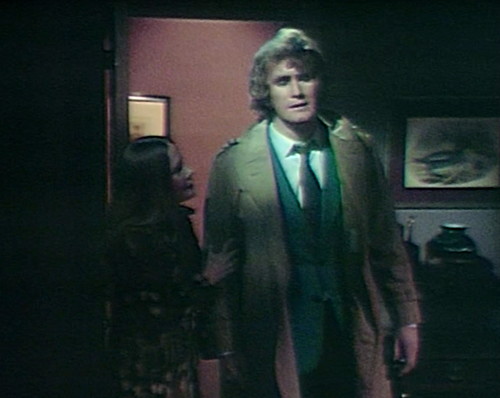 Jeb snaps off the lights and tells his bride that they can’t stay, which doesn’t go over big with the little woman. Carolyn hasn’t been married that long, but she knows enough about life to know that you’re not supposed to spend your entire honeymoon walking in and out of hotels.

The conversation that ensues is extremely frustrating for Carolyn, and, in a larger and more important sense, for me.

Carolyn:  Jeb, what is it you’re not telling me? What are we running from?

Jeb:  What gives you the idea we’re running from anything?

Carolyn:  You! You give me that idea! The way you act, and the way you look, and the things you say! Maybe there’s an explanation. If there is… I want to hear it. I want to understand.

Jeb:  Honey, there are just some things that you can’t understand, I’m sorry!

Carolyn:  How do you know that, unless you give me the chance?

She grabs him, and spins him around to face her.

Carolyn:  Jeb — I’m your wife! I have to understand what all this means!

Jeb:  All right. You want to understand it? It means the honeymoon’s over. It’s over! Now, let’s get out of here!

And the agonizing thing is that she’s doing everything right. She’s acting like a smart character, and she’s trying to move things along. But Jeb categorically refuses to make this story any better, and I wish I knew why.

The Dark Shadows writers have painstakingly constructed an emotionally wrenching tragic end to this tale, which they are one hundred percent determined not to use. It’s so simple that you can say it in six words: Jeb is not a normal man. Imagine what would happen, if we could only say that to Carolyn, and get her to believe it.

Honestly, I don’t care what happens at that point. She could investigate, or reassure, or declare war, or fall into a coma. The only thing that I want is for Carolyn to assimilate the obvious fact that Jeb is not a normal man. Even an inkling. Oh, what a stupendous relief that inkling would be.

And yet, after all this time, she still believes that the unholy pile of force-grown flesh lying next to her in bed is what he appears to be: a photographer from nowhere special, who won the heart of the prettiest girl in town.

Even now, when he’s acting nothing but suspicious, she doesn’t say, hey, y’know what, I don’t really understand what happened on our first date. I drank something, and I broke an antique, and then I woke up at home. Explain that, and we can work forwards from there. 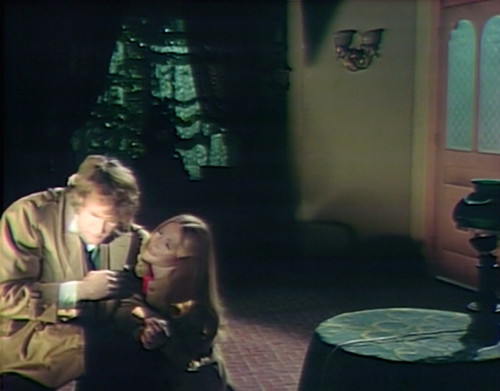 Now, I get why Jeb isn’t telling Carolyn the truth. Number one, he’s afraid she’ll stop loving him; number two, he’s not good at solving problems; number three, he hardly even understands it himself. Fine. Jeb Hawkes, if you’ll recall, is only about four months old at this point. His adult role models were Megan, Philip, Barnabas, Oberon and Haza, none of them qualified to raise children. He’s had no opportunity to learn or grow, and he has never handled a single problem without making it worse.

But Carolyn is a grown woman with a brain and a spine. She’s dated werewolves and lawyers and fishermen and Frankensteins. She’s spirited and strong, and you don’t want to be on the other side when she gets angry. And they refuse to let her be a grown-up.

She’s allowed to know about the shadow — here it comes, boogley-boogley-boogley — but that’s the only information that she’s allowed. She gets to make a couple of inferences, but then there’s a hard cut-off, and she’s denied access.

Carolyn:  Is it Nicholas Blair?

Jeb:  What made you think of that?

Carolyn:  Because he’s evil, and he wants to hurt you. I know that.

Jeb:  Oh, Carolyn, you know too much!

Carolyn:  It is Nicholas, isn’t it? Jeb — suppose I were to go to him.

Carolyn:  But when? Every night, the shadow grows larger!

Carolyn:  Where are you going?

Jeb:  The less you know, the better!

And I just don’t understand it. Why are they treating Carolyn like a child?

It’s especially frustrating because Carolyn’s had a long series of prophetic dreams, where she learns the really explosive revelation, over and over again. At first, it was just suggestion — Jeb holding up his hands, covered in warm, red Stoddard blood.

But after three dreams like that, she still wasn’t getting the message, so she finally had a dream where Barnabas shows up at her wedding, points at Jeb, and shouts, “You killed Paul Stoddard!”

And she still doesn’t know that he’s not a normal man. That’s not even a question that interests her very much.

So it doesn’t work. The whole entire Leviathan story, from beginning to end, does not work at all. This story is supposed to be about Carolyn, but they never allow her to make any grown-up choices. It’s like if they went to 1795, and Josette decided that instead of throwing herself off Widow’s Hill, she’s going to start taking French horn lessons. Barnabas and Angelique and Sarah and Naomi and Zombie Jeremiah are just standing around, shuffling their feet and looking sheepish, and she looks up from her sheet music for a moment, and she doesn’t understand why everyone’s looking at her. No, I’m not going to throw myself off of anything. I’m going to play French horn for a while. That’s what it turns out this story was about.

And they set this up so well. They brought her father back on the show, and they spent time on Carolyn and Paul bonding, and they kept him around until the Leviathan kid was ready to age up to an adult.

And then they killed Paul on the same day that the adult Jeb appeared, because that was the whole point of the story — that Jeb’s purported romance with Carolyn hinges on this one huge secret that everybody knows, except for her.

The first time that Jeb sees Carolyn is at Paul’s funeral. They did all those dream sequences, where she was supposed to learn the truth, or at least start asking some sharp questions. They were clearly leading right up to this very moment — or, preferably, four or five moments ago, before the audience gave up in despair and started making other plans for 4:00 in the afternoon.

I mean, at least I have the satisfaction of knowing that I was right — that the Dark Shadows writers never had a plan that went any further than three weeks ahead. Even when they really clearly did have a plan — and the Paul/Carolyn/Jeb thing was obviously sketched out, far in advance — it turned out that it wasn’t a plan after all, because they couldn’t figure out how to follow through on it.

So hooray, I was right. I understand how Dark Shadows works. Good for me.

Jeb rants, “And each day, every night, when it gets larger, and larger! And every night, it’s able to reach out a little further, and further!”

When Quentin and Sabrina are standing by the mirror, something intrudes into the picture at the lower right corner.

In act 2, Sabrina’s scene begins with a shot of the clock. As we fade in, she makes a circular motion with her finger around the clock face. In a minute, she’s going to move the clock forward from 7:30 to 8:00. Maybe she’s practicing?

There’s a close-up on Sabrina holding a sheaf of bills, and it’s obviously play money.

My favorite prop makes another appearance today — the Ralston-Purina lamp, which shows up at Bruno’s place and gets several nice shots. We last saw this lamp a month ago, in the Collinwood drawing room. 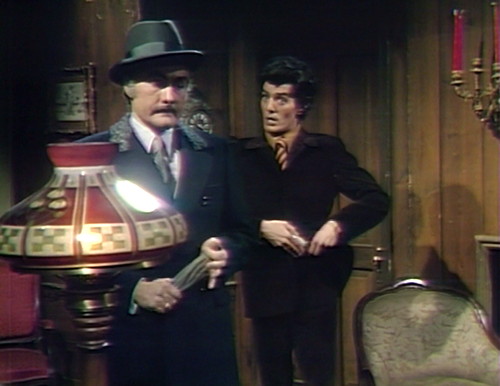