“Whatever it is that’s drawing you there, I hope it doesn’t harm you.”

Roger Collins wakes up, somewhat the worse for wear. He’s in a hallway, and his head hurts. He tries to take stock of his surroundings, but these particular surroundings are difficult to stock-take. Why is he on the floor?

A friend is standing nearby. He looks up at her, and moans, “Julia, what are you doing here?”

“Elizabeth said I could come and see the architecture in the east wing,” she chirps. “It’s very interesting.” Roger tries to assimiliate this information into his current worldview.

The problem is that he’s got a couple big holes punched in his memory card, one labeled Killer Octopus from Outer Space and the other Oh My God That Nice Woman from the Antiques Store Is a Vampire. Between them, that pretty much sums up everything that Roger’s experienced in the last couple of months; everything else is just make-believe visits to Bangor-on-Business, which is imaginary.

He tries to narrow down the problem, and lands on location. “The east wing?” he scowls. “Did you say the east wing?”

He shakes his head, and exclaims, “Well, what am I doing here?”

“Well, now, Roger, I’m sure you have a very sound reason,” Julia says, as she helps him to his feet, “but blows on the head have a way of making people forgetful.” Then she pats him on the arm, and encourages him to go talk about it somewhere else. 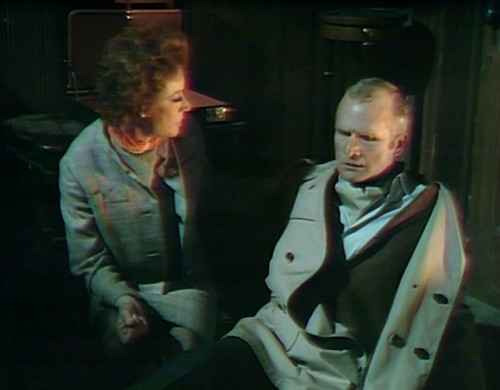 So that’s where we’re at, late March 1970. The audience has suffered the storyline equivalent of a severe blow to the head, and now we’re rising to our feet, groggy and confused, and we find ourselves in the east wing. What are we doing here?, we ask, and Dark Shadows is nearby, making reassuring noises, and directing our attention elsewhere.

These are the dying days of the Leviathan storyline, as the show clears its throat and tries to think of something new to say. There have been many great moments over the last four months, but not that many, and it’s time to move on.

This isn’t the first time that Dark Shadows has dropped a storyline and sprinted away — there was that time when we did mad science experiments all summer long, and then suddenly one day everybody decided to go and develop other interests. But this is the most brutal cutoff we’ve ever seen.

This time, they’re not going to transition smoothly into a new set of story points. Before the Leviathan story ends, they’re going to eradicate all evidence that it ever existed. Everyone’s memories are getting neuralized back to starting positions, and every single character introduced in the last four months will be hunted down and destroyed.

We’re currently one week into this three-week bloodbath, and we’ve already taken care of Philip and Peter. Today, it’s Megan’s turn. Then there’s just four Leviathan characters left — Bruno, Sky, Nicholas and Jeb — and we’re not allowed to move to the next story until they’re wiped from the surface of the earth.

I mean, even when they killed Eve, and sent Adam upstate to live on a farm, other characters introduced during that period of the show were allowed to stick around. People even married some of them. But apparently the Leviathan story needs to be removed root and branch. Well, as long as they’re having fun, I guess that’s the main thing. 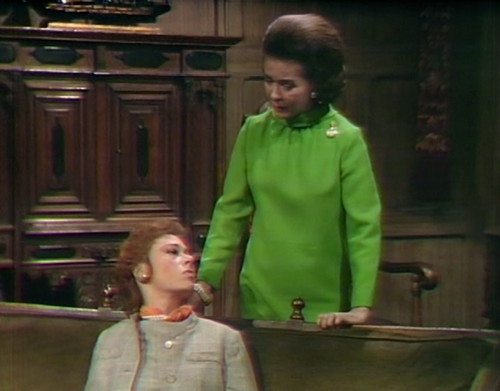 “There’s no record of anything strange ever having happened in the east wing,” Elizabeth says, “but that’s not conclusive proof, is it?”

“Well, what do you mean?” Julia asks. This is unfair. People say a lot of nonsense in this house, and if you’re going to go around asking them what they mean, then everyone will just get moody and go ask Mrs. Johnson for a cup of tea. Sometimes people just say things.

But Liz is a pro; she doesn’t get tripped up. “Well, our family has a habit of forgetting things they find unattractive,” she says. “In this case, I find nothing to forget, or hide.”

She strikes a pose. “The east wing is remarkably free of secrets,” she declares. It’s called style. 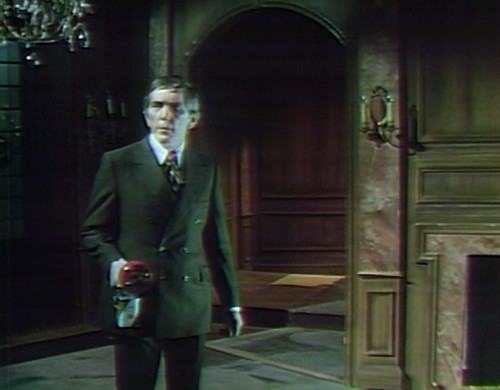 But here we are in the east wing, and it’s simply bristling with secrets. There’s a vampire in it, for one thing, carrying around a flashlight and trying to figure out how to jump into somebody else’s time band.

You see, they’re rebooting Dark Shadows in a couple of weeks — keeping the sets and the character names, but starting the story over, and telling it in a different way. These days, you usually have to wait a few years before a reboot, but in 1970 it was apparently okay to just go ahead and reboot while you’re still in the middle of the show.

That other Dark Shadows has been leaking through into our world for the last several days, and Barnabas is intrigued. He can’t really figure out what this alternate version is about, because all he’s seen are trailers for coming attractions. The new show has Angelique in it, apparently, and a new Elizabeth, and a new Julia. They were supposed to be played by Michelle Pfeiffer and Helena Bonham-Carter, but the show’s budget isn’t big enough to hire movie stars from the future, so I guess we’re stuck with the TV cast. Oh well, maybe next time. 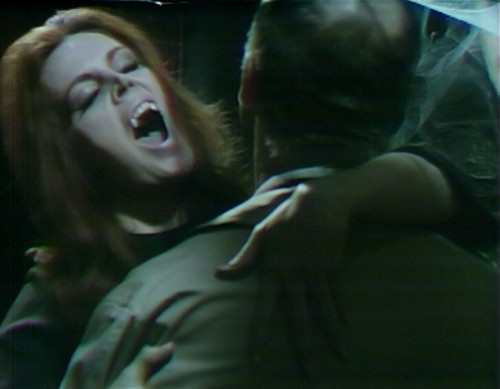 But Barnabas’ secret gets interrupted by another secret, unfolding in the next room. Megan Todd was killed and turned into a vampire recently, and now she’s moved into a deserted corner of Collinwood, because her antiques store burned down and she doesn’t have the insurance money yet. So now she’s doing a brisk business in the east wing, and getting a surprising amount of foot traffic. It must be the architecture up there; I hear it’s very interesting.

So there you go, that’s two secrets in the east wing, and probably more to come. That’s the great thing about secrets, you can always make new ones. Plus, they don’t cost anything, and they’re easy to maintain.

Barnabas witnesses Megan’s blood-spurting attack on a member of his family, so he hurries downstairs to enlist an ally in hunting the monster, and destroying it with wood and metal and fire.

I mean, he doesn’t do that right away; first, he has a conversation about the imaginary friends he’s making in another time band. “She’s part of this other existence too!” Julia says, and he says, “This same barrier seems to keep me from entering when the room is in the other world,” and she says, “You mustn’t let yourself become part of it, until we know more about it.” And then finally they start talking about murdering their houseguests. 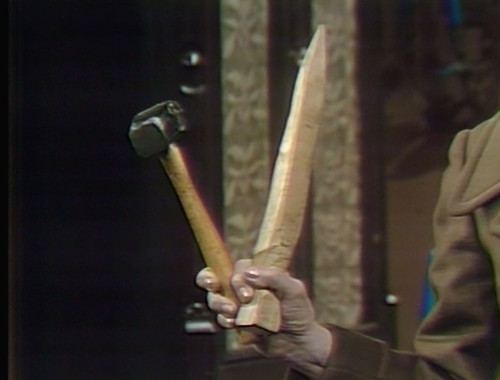 So, I know that I’m being kind of unfocused and dreamy today, just drifting from one weird line of dialogue to another, but that’s what the show is like right now. Roger is drawn to Megan, and Barnabas is drawn to the Parallel Time room, and Julia flashes a peace sign at Willie to tell him that it’s time to go to war. We’re in a loopy, liminal space, caught between worlds.

“You mustn’t think of Megan as a person,” Julia says, as she leads Willie to the combat site. We probably shouldn’t think of Megan as a person, either, because she isn’t one. She’s a fictional character, and a failed one at that. The writers stopped thinking of her as a person around six weeks ago, when it became clear that this story wasn’t going to get a whole lot better. Now she’s just a hairdo and a pair of fangs, hovering in lazy circles around Roger’s neck.

This whole plot thread has been stretched so thin that they’re not even engaged in the hunt. Barnabas is investigating something else when he trips over Megan biting Roger, and when he goes downstairs to tell Julia about it, he leads with the Parallel Time news. Megan Todd dies today, for the second time in a row, and there’s nobody left to care. 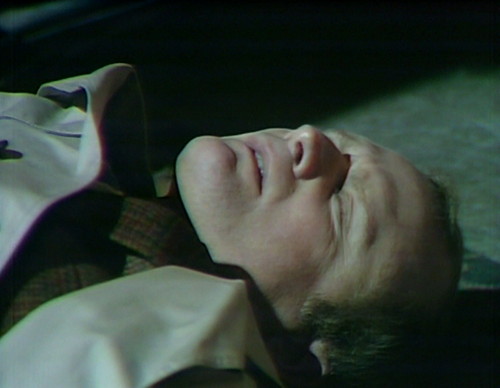 So Willie makes with the hammer and stake, consigning Megan to oblivion and a role on Somerset, whichever comes first. And Roger wakes up on the hallway floor, with a head full of holes and a ticket to Tarrytown.

When Barnabas is in the Parallel Time room, he hears Roger walking down the corridor. He hurries to hide behind a door, and he slips a little bit. Go look for this one, it’s cute.

When Julia and Willie enter the room with Megan’s coffin, you can clearly see a stagehand standing behind them.

Megan doesn’t really fit in her coffin. When Willie prepares to stake her, you can see her legs curled to fit inside the box.

In her autobiography On Stage and In Shadows: A Career Memoir, Marie Wallace recalls:

“During my last day at the Dark Shadows studios, right after the run-through and before the dress rehearsal, I got a call from my agent, Jeff, about my next TV assignment. He asked if I’d like to audition for a new NBC daytime serial to be called Somerset. He added that the storylines might not be as exciting as DS, but I would be creating a new character on a new show, which could be interesting. I jumped at the opportunity and responded, ‘Yes, I’d like to very much, ’cause they’re putting a stake through my heart today!'”

Somerset, which premiered on March 30th, was in the same timeslot as Dark Shadows, the first soap opera scheduled opposite DS since summer 1968. Wallace stayed on the show until 1972. In 1973, she appeared on Broadway in a revival of The Women, and in 1974 in Mert & Phil. She also did guest spots on Fame and Fantasy Island, and on daytime soaps Guiding Light and One Life to Live. She mostly retired from acting after a while, and became a photographer, but she’s continued to act now and then. Just a few months ago, she had a part in the second season finale of Hulu comedy Difficult People, and she performs in several of the Big Finish Dark Shadows audio plays. 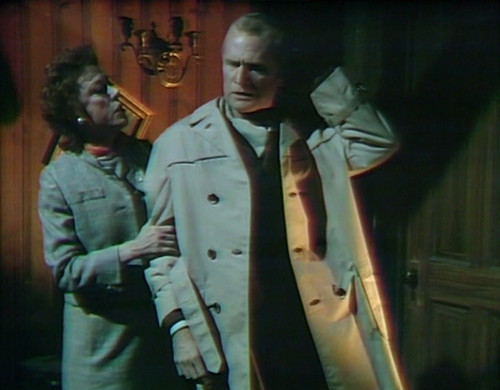