“I have the feeling that perhaps all of us are leading a different life in that room.”

Yesterday, eccentric millionaire Barnabas Collins had a strange and frightening experience, namely: watching an episode of Dark Shadows that he wasn’t in.

He was poking around in the deserted east wing of Collinwood, opening doors and closing doors and hunting for a coffin — you know, typical Dark Shadows stuff — when he suddenly came upon a room where Elizabeth and Julia were dressed up in other people’s clothes, and talking about other people’s problems.

We’re meant to be intrigued by this strange desert otherworld, so they made use of that great guarantor of television mystery: the unheralded pronoun.

She is dead! She’ll be back! and back and forth they went, acting for all the world as if proper nouns were prohibited by law, and then they slammed the door and ran away into the night, giggling.

It’s a good gag, if you can pull it off. Other people have trolled Barnabas in the past — like all gloomy and self-involved people, he is particularly susceptible to trolling — but I don’t think anybody’s ever done it by just standing around in a room and pretending they don’t notice him. They’re breaking new ground in the field of Barnabas-bothering. 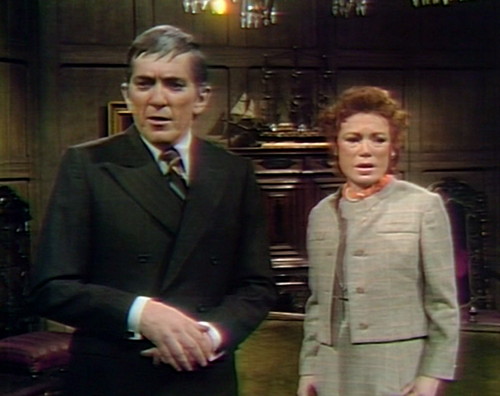 So screw the Leviathans, I guess; they’re yesterday’s problem. Jeb and Carolyn are married, and the world didn’t end, three cheers for that. Now they’re off on an unhappy honeymoon, and everybody else is moving on. The Leviathans tried to snatch the show away from Barnabas and Julia, but it is hers, it will always be hers.

Now we get to watch Barnabas break the news to his best friend that their world is even stranger than they thought it was. “Oh, it’s insane, but I am not mad!” Barnabas insists. Luckily, Julia’s had a lot of experience threading that particular needle.

“I believe you, I guess,” she says, settling down on the sofa. This level of belief appears to be adequate, as far as Barnabas is concerned. He’s okay with a 51/49 result, as long as he stays above water. 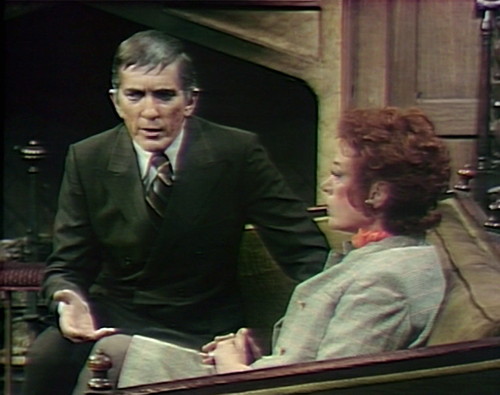 Barnabas attempts a description of his experience, filtered through Fridspeak.

“Then I saw Elizabeth come in,” he says. “She went right to a closet, and opened it. There were many, many dresses there, and she started to take them out, and then you came in, and ordered her to stop! You said that she wasn’t to come in that room, it wasn’t hers, but Elizabeth said that she was dead, and you insisted that she wasn’t, that she’d come back!”

Julia gasps, and says, “Barnabas, that’s frightening!” although it isn’t, really, at least not from this altitude.

“There’s no explanation possible, none!” Barnabas cries. “And yet I have the feeling that you, and Elizabeth, and Quentin — perhaps all of us — are leading a different life in that room.” And then Elizabeth comes in and talks about upholstery.

So let’s take a moment to discuss the use of postulates as a storyline accelerator. A good, story-productive sensation can take you pretty far in a story like this, because it means you don’t have to mess around with silly old things like evidence, or plot points. You can just jump straight to a preposterous conclusion, and carry on from there.

They did this all the time in the Dark Shadows comic strip, where they only had a few panels a day to move things along, and the first panel was a restatement of the last panel from the previous day. So Barnabas would get all these ominous vibrations, like “All my instincts tell me… it wasn’t a wolf! It was another kind of creature!” and “I sense that you are vulnerable to the same element which killed her — FIRE!”

Postulates are also a big feature of the Gold Key comic books — “It is true! William Starbuck has returned to destroy all who bear the name of Collins!” — and the Paperback Library novels — “This could be a find — a lizard that’s somehow managed to exist for a thousand years!” — and obviously they’re used on the show quite a bit.

Dr. Woodard:  We’re still faced with the fact that the wounds on Maggie’s neck were not the bite of any animal indigenous to this area.

Burke:  You’re absolutely sure about that?

Woodard doesn’t actually say “It was another kind of creature!” but I bet he’s thinking it. Delivered with conviction, a good postulate can get you across the most rickety suspension of disbelief.

And it helps, of course, when you’ve got an associate who’s willing to say “I believe you, I guess.” Give me a friend and a place to stand, says Barnabas Collins, and I shall move the world.

So that’s how you end up, one scene later, with Barnabas opening the doors in a deserted wing of the house, and Julia gasping “Empty!” which is not the surprising part.

And then Julia, determined to exert herself in the service of expressive dramatics, says, “No, Barnabas, don’t go in there, I have a strange premonition!” This means we are open for business. 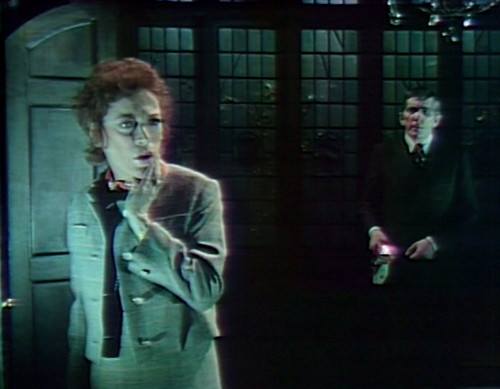 Entering the room, Julia puts on her “I’m trying to remember” face, and appeals to the usual authority.

Barnabas:  Julia, what is it?

Julia:  I’m trying to remember… I don’t know if it has anything at all to do with this…

This is true; Barnabas is prepared to believe literally anything, as long as it moves the scene forward. And then Julia invokes the wise old man.

Julia:  Well, I was at Eliot Stokes’ house, one night last spring. We were having a brandy after dinner, and he started talking about time.

Julia:  He was complaining that we all simply accept it. Well, we don’t have much choice, I thought. But Eliot had been reading a theory that sounded insane to me — a theory of Parallel Time.

And then look at Barnabas’ cute little surprise face! Other people’s brandy talk is a source of wonder to him.

She continues, “We accept the fact that our time is the only time that we can truly know.” This may be true for most people, although it doesn’t apply to anybody in this room. In fact, last spring, when Julia and Stokes were having this strange postprandial seminar, Barnabas had just meditated himself back to the late nineteenth century.

“Suppose time is like a road,” she says, “and parallel to it, there’s another road. On one, we live the lives we know, but on the other road, our lives are different, because we’re in a different time band, and we’ve made different choices.”

Barnabas just hangs back and lets her continue; you can’t really stop people, once they’ve started supposing what time is like. A couple episodes from now, Stokes will explain to Barnabas that time is like a rip in his coat sleeve. Time is like a lot of things.

“For example,” Julia says, still furrowing the b., “in that other band of time, I could have made a different choice when I was at college. Instead of being a doctor, I could have married and had children.”

Then she gasps, and delivers the conclusion. “Barnabas — you don’t actually think, through some warp in the time band, that you have actually seen us, living other lives?”

Barnabas didn’t think that, naturally, until this very second, but he’s thinking it now. We all are.

Then they pull one of those two-handed Mulder maneuvers.

“Oh, no,” Julia says, “there’s got to be a more rational explanation,” and then Barnabas says, “Must there?” and that’s it, we’re off to the races.

That little turn in Julia’s attitude provides a moment of relief from trusting this lunatic plot contrivance, and then Barnabas ratifies it. From now on, God help us, this is a thing that we believe.

Barnabas tells Julia that he saw a portrait of Quentin and David; he was probably supposed to say photograph.

Roger tells Willie, “You’re one of the few in the world who hasn’t heard. Well, delight in your ignorance, Loomis.” Then he has to stop talking while the camera shows Megan peering in at the window, and then slipping away. Roger gets a quiet offscreen cue — “Go” — and then he repeats, “Delight in your ignorance.” It’s way too long between sentences, and sounds completely unnatural. Also, the camera is out of focus.

Julia delivers some Fridspeak: “Barnabas, I know how strange this evening has been for you, but you must not feel personally about Megan Todd.” 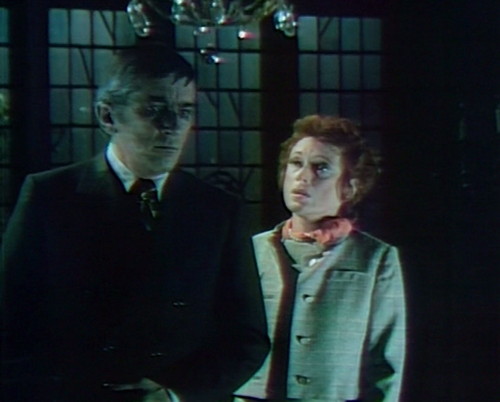