“To think that on this night, this strange night, you might have come back to us in that dreadful condition.”

Well, Maggie Evans is all locked up again, as part of the Leviathan party’s continuing war on women. Well, on one woman in particular.

Three weeks ago, Maggie found herself on the far side of a door in the strange desert otherworld known as Collinwood’s secret passages, being menaced by an untamed teenage slime god who was pursuing some kind of board-game related vendetta. After three days of confinement, Maggie managed a daring escape by waiting for somebody to open the door for her.

Now she’s locked up again, this time in a crypt, by a zombie and an assassin and a guy with a box. So it’s just like the good old days, isn’t it, when Ron Sproat would bring the story to a screeching halt by locking up a pretty girl and keeping her there, while everyone else walks in circles and talks to police officers over the phone.

And hey, guess what. Back at Collinwood, Julia is closely monitoring the situation as Barnabas talks to the police, who don’t have anything to contribute. The police haven’t seen Maggie either. No one has. You can tell that this is an urgent call because Barnabas is using both hands to hold the receiver; if the scene gets any more intense, he’ll have to ask Julia to stand behind him, in case he needs a third hand.

Once he hangs up, Julia asks if Barnabas should tell the police about the antiques shop, the headquarters of the mysterious cosmic death cult that’s been causing all the recent anxiety, but he says, “I cannot give myself away! If I am to defeat the Leviathans, I must do it from within.” And then he just stands there and looks into the distance, like he’s posing for a statue of Man Defeating People From Within.

With nothing left to do, he decides to amble on over to the antiques shop, to see if Megan and Philip know anything about Maggie. Julia takes a moment to say, “Barnabas — be careful.” Keeping this in mind, he exits, and after a careful off-stage conversation, he returns to Julia with the stop-press news that Megan and Philip don’t know where Maggie is either.

So I’ll admit it; this storyline is getting me down. They had a pretty good couple of weeks there, with Jeb Hawkes as the exciting new villain — drinking poison, killing dudes, raising a zombie army, and pushing little kids off bikes. Jeb is the final form of the quick-grow Antichrist they’ve been raising in the Collinsport small business community, and now that he’s a grown man with car keys and a shaving mirror, he’s ready to initiate the final stage of his master plan to marry Carolyn, and turn Collinwood into a convention center for hypnotized people.

But it turns out that the entire storyline hinges on Jeb turning Carolyn into a hideous blood-soaked she-beast, which is the kind of thing where either it happens or it doesn’t. There’s not a lot of middle ground in this type of situation.

Now, there’s still a core of really exciting story here, because Jeb thrill-killed Carolyn’s father a couple weeks ago, and now he thinks that he’s going to marry Carolyn before she figures that out. Dude is apparently not aware that he’s on a soap opera. I mean, Dark Shadows downplays a lot of the normal soap opera content, but a stop-the-wedding revelation about the groom smacking the bride’s father around with acid-tipped tentacles is simply impossible to ignore.

But everything else in this storyline is really just a superstructure built on top of that core. When Jeb and Carolyn aren’t on screen together, then there’s not a hell of a lot to do, except fret and do things from within. A couple days ago, Barnabas sent Carolyn off to sleepaway camp, so now we’re just messing with Maggie and waiting to see if anything comes of it. 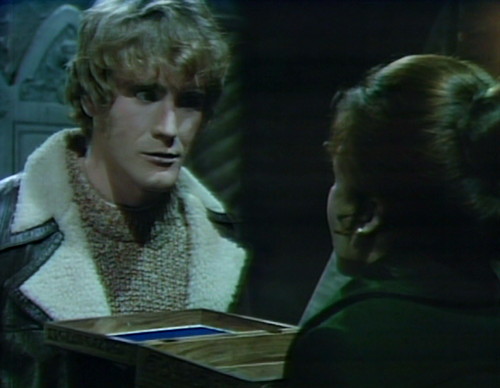 At the end of yesterday’s episode, Jeb brought the spooky old Naga box to the crypt where he’s been keeping Maggie a prisoner, and he told Maggie to open the box. That was the big cliffhanger for the day: “Open the box, Maggie!” Hand reaches out, dramatic music cue, closing titles.

At the start of today’s episode, she opens the box, and there’s nothing inside. This is all going according to plan.

“There is something in the box, Maggie,” Jeb explains. “There’s a spirit, a peace, a belief. And now you are one of us.” Apparently, these are things that can be kept in empty boxes. And then he does a three-minute onboarding process where he tells Maggie a whole bunch of information that we already know, like who else is involved in his little group, and that he’s suspicious of Barnabas. He asks her a bunch of questions, which she doesn’t really answer, and the whole thing feels like they don’t really need the CEO of the organization to be this personally involved.

So it doesn’t feel like there’s a lot left inside this particular spooky box. Barnabas thinks he’s doing things from within, but from what I can see, there isn’t a lot of within in the first place. There’s a bunch of pro-Jeb sympathizers hanging around on the margins, but Jeb is so arrogant and childish that he refuses to let anybody else do anything. It’s really just Jeb, and he’s already suspicious of Barnabas, so how long is it going to take for this to play out?

Then it’s back to Collinwood to check in with Barnabas and Julia, who are still hanging out in the foyer and worrying about Maggie. Now, we already know exactly where Maggie is right now, and we can tell that they’re not going to get any closer just by standing there and talking about it, and yet this is the scene that they’ve decided to broadcast in our direction. This is typical of these pretty girl in peril situations; we call it reviewing the case. Barnabas and Julia are very good at reviewing the case, and if anyone can make this scene interesting, then they can. Except they can’t, which means that this is a particularly boring scene, and the only reason I’m focusing on it is because there’s not a lot else to do. 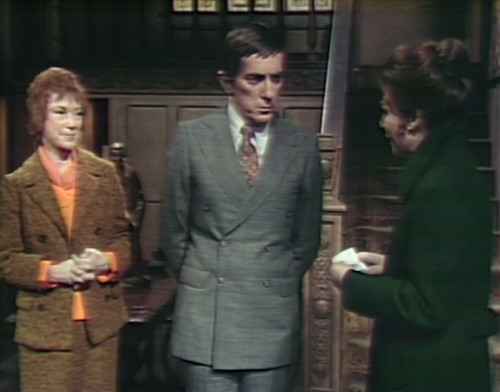 Because guess who walks in the door next: Maggie! Jeb has sent her back to Collinwood with a new suitcase and a flimsy story about being called away to see a sick aunt or take care of someone’s dog or something; I’m not sure, because I don’t waste my time listening to flimsy excuses. I have no time for the flimsy; I’m a busy man, or at least I’m busier than Barnabas and Julia appear to be.

But obviously, Maggie’s return is an explosive plot development, because now she’s hypnotized and working for Jeb, and he’s sent her back to Collinwood to keep an eye on Barnabas. That means that Maggie is working from within the within.

So this is what happens sometimes, when you come up with one cool idea — Paul selling Carolyn to the Leviathans, who are going to marry her to the scary monster — and then you try to spin it out for two-plus months without any real thought given to anybody else’s role in the storyline. They have a whole bunch of people — Maggie and Liz and David and Quentin and Megan and Mrs. Johnson and Angelique — and none of them have any real connection to a storyline. Even Julia is now reduced to standing around and watching Barnabas have phone conversations.

So, anybody who complained that 1897 had too many subplots going on: this is apparently the alternative. What I wouldn’t give for a Trask, right about now.

Oh, and then later Maggie comes downstairs and tells Barnabas that Jeb tried to recruit her, but it didn’t work, because it turns out that empty boxes don’t actually magically rewrite people’s personalities, go figure. So Barnabas says that Maggie should pretend to believe Jeb, and give him information about what Barnabas is up to, which means that now Maggie is working from within the within the within. And if anybody can come up with a better plot twist than that, then the writers of Dark Shadows would like you to get in touch, as soon as possible.

Tomorrow: Essence and Intelligence and Werewolves.

In the teaser, Jeb asks, “Do you want me to bring him back here, Maggie, to tell you to nopen the box?”

After Maggie opens the box, their next scene starts with Jeb and Maggie talking over each other, twice.

Maggie says, “Barnabas, there is something that I do want to talk with you.”

When Sabrina tells Chris about “a study of lycanthropy”, there’s a moment of audio bleed; you can hear a man saying a sentence that starts “I think that –“.

The credit “Fashions by Ohrbach’s” is misspelled “Orhbach’s”.

Tomorrow: Essence and Intelligence and Werewolves.