“I want you to do nothing. Promise me that, and I will not use the coffins.”

Now, from Josette’s point of view, it’s a weird decision either way, but it gets weirder the more that you think about it, which personally I was planning never to do. But let’s take a moment.

Kitty Soames — a living human woman, in the year 1897 — has discovered that she is the reincarnation of Josette DuPres, who toppled over a cliff in 1795. Reincarnation means that it’s the same spirit, reborn in a new body. Right? That’s what this story point has done to me; it’s made me question what reincarnation means.

So Kitty is Josette, in some kind of fictional necrobabble way. And listening to Josette’s music box put her into a kind of fugue state, where she remembered being Josette. I’m okay with that part.

But now Kitty is trying to suppress those memories, because she’s worried that the Josette persona will take over. So she goes to Josette’s room in the Old House, and argues with the portrait.

“I’ve got to go away to live my own life, and you can’t come with me!” she says. “You’ve got to let me be myself! I’ve got to forget Josette DuPres!” And then the portrait sasses her back, saying, “It is Kitty Soames you must forget!”

Now, obviously, if she’s really Josette, then who is she talking to, but it’s metaphor, it’s stagecraft, it’s a vampire soap opera and who even cares. And then there’s the floating. 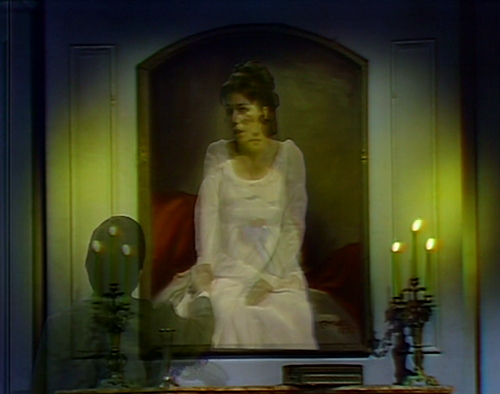 All of a sudden, Kitty’s wearing Josette’s dress, and she’s airborne. She floats all the way up the wall in a gust of Chromakey, and when Barnabas comes into the room, he sees her sitting above the mantel, because now we live in the Haunted Mansion.

Barnabas reaches out to take her hand, and they both fade away, on a one-way trip back to 1795. And that’s how Barnabas exits the 1897 storyline, in this absolutely perplexing way.

Now, I want to give them credit here, for pulling this off in such an unexpected way. Somehow, they have to extract Barnabas from the 19th century, and send him back home, and there are several obvious paths that they could have taken — another I Ching ritual, or Angelique casting a spell. In the worst possible version, Barnabas could have just faded away, and found himself back in 1969. Instead of doing that, they gave us a memorable, surprising visual.

But can anyone tell me what is actually going on here? It feels like Kitty is suddenly using magic ghost power to suck herself back in time, discarding any chance of happiness with Barnabas in order to relive the worst night of their lives. This is where I think we’re spoiling the concept of reincarnation for everyone else.

Anyway, Kitty’s weird decision — or Josette’s, or whatever — is to take Barnabas back to 1795, specifically the night that she killed herself.  On this night, as they say in the opening narration, Josette threw herself off a cliff, because Angelique told her that Barnabas was planning to kill her, and turn her into an unspeakable creature of darkness. Angelique’s negative campaign ad really resonated with the electorate, because that is exactly what Barnabas was planning to do.

So we find Barnabas lying on the ground in the woods, once again asking himself, what the hell time do you call this? He’s had a whole series of these unpleasant moments, where he comes to after a blackout, and desperately gropes for a calendar.

God damn it, he thinks. Am I going to have to kill Nathan Forbes all over again?

Barnabas’ servant Ben shows up, and fills in the backstory, and Barnabas immediately groks the entire scenario. Obviously, Kitty has become Josette, and she won’t remember 1897, even though Barnabas still does. So she’s going to follow the original sequence of events, because I guess only guys have free will.

The question is: Has Barnabas changed since the last time we were here, in February 1968? Has he matured as a character, becoming a hero that can go back and actually undo the mistakes of his past? The answer to this question is no.

You can tell just by the way he handles himself in this first scene. Barnabas doesn’t explain anything to Ben, who keeps asking what he’s talking about. He just runs through the sequence of events. “I gave you orders to get a carriage, and take the coffins to the boat. But then Angelique came, and locked you in the shack. She was determined to ruin my plans.” Gotcha.

And then he acts like he’s going to be the mastermind of the evening, moving people around like chess pieces. “If Kitty has become Josette, she should be in her room. Come back and report to me. And then go to the shack. And when Angelique comes, bring her to me in Josette’s room at the Old House!”

This is exactly the problem. He needs to not be doing this.

Kitty’s re-entry is a bit smoother. She just wakes up as Josette, and says that she’s had a strange dream. “I was looking at a portrait…” she says. “My portrait!” Natalie asks what she’s talking about, and she says, “The portrait — it’s as if it were alive! It doesn’t make any sense at all, but I felt as if I were the girl in the portrait! Then I woke up here.”

So, there you go. Even Josette doesn’t think that this plot point makes sense, and she’s the one who started it. What chance do the rest of us have?

But sense, as always, is entirely beside the point. The show needs an off-ramp from 1897, and apparently when we want to close down a storyline, we visit 1795 for a few episodes. That’s what they did in January when they needed to wrap Vicki’s story; we even got a clip show that time. Josette going over Niagara Falls is a popular plot point, so we might as well revisit it while we’re waiting for something new to happen.

But the single most surprising thing in this episode is Angelique’s dress. After seeing her swan around for months in her sumptuous 1897 wardrobe, this return to servant-girl couture is almost painful. She looks diminished. It’s practically a special effect.

And strangely, this is the only moment in this tangled timeline when Angelique doesn’t know everything that we know. Going by the logic that we’ve seen so far, this version of Angelique should be asking Barnabas how Quentin got away from Count Petofi, and whatever happened to that tedious Kitty Hampshire. Instead, we have straight-up episode 425 Angelique, which is even more surprising, because we’re not used to Dark Shadows following any kind of consistent logic. 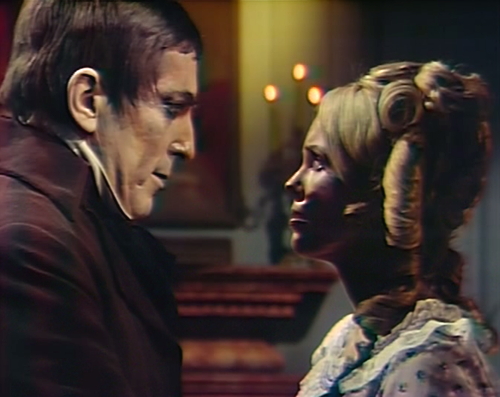 So what we have here is essentially a hostage negotiation, with Barnabas asking Angelique to spare Josette. He promises that he won’t try to turn Josette into a vampire, if she’ll lay off the cliff-diving lessons. It goes spectacularly badly.

Angelique:  What are you planning now?

Barnabas:  I only want to save Josette’s life.

Angelique:  You really love her, don’t you?

Barnabas:  Too much to have her join me in that way.

Angelique:  I believe you. How often I’ve wanted to hear you say that one word, Love… and mean me.

Barnabas:  Angelique — if you have any feeling for me at all, other than hate — do this one thing for me.

Angelique:  And if I agree?

And then he just looks at her, like a chump, because he has nothing to offer. He comes up with “I will be grateful,” which is not the correct answer.

So, as I said: No. Barnabas can’t just put his foot out, and trip history as it thunders by. Once again, he thinks that he can grab the closest dark-haired woman and turn her into Josette, without propelling her down the same path, over the cliff and into the sea.

Kitty could have survived. That is unmistakably clear. If Barnabas had been able to step back for five seconds, and not throw the music box at her, then she could have married Edward, and experienced whatever joy or sadness or disappointment would have followed. He did have the choice, just at that moment, to save Josette’s life. He chose to destroy her.

There is no new, mature Barnabas, who returns in triumph to a ticker tape parade and the key to the city. He’s just the same foolish mess of a man, tripping over his own plans, falling backwards downstairs into whatever comes next.

When Barnabas wakes up in the woods in the first scene, he has some stray leaves in his hair and on his cape.

When Ben is talking to Barnabas in the woods, there’s the sound of a creaking door, or a chair. It happens in the middle of Ben’s line: “Mr. Barnabas” — creak — “change your mind!”

Josette is telling Natalie about her strange dream. “I was dressed like no one else is. I was holding a dress, it was my dress!” Natalie answers, “You must not — think of that,” which doesn’t mean anything. Then she asks Josette to continue telling her about the dream.

After Barnabas asks Angelique to stay with him until midnight, someone in the studio coughs.

When Natalie and Josette tussle and knock over the vase, it falls onto the bed first, so it’s out of synch with the “smashing glass” sound effect.

Natalie says that it’s an hour to midnight, but right after the vase breaks, you can see that the clock on the mantel says 10:05.

As Josette approaches the cliff on Widow’s Hill, a boom mic peeks into the frame.

Josette’s sleeping on mustard-colored sheets that we’ve seen before, on David’s bed back in 1967.

At the end of this episode, Jonathan Frid made an announcement over the credits: “This is Barnabas Collins. On Tuesday, November 18th, Dark Shadows returns to the year 1969, when one of the most terrifying tales ever told will begin on ABC.” The same text (minus the first sentence) was repeated by an announcer on Monday’s credits. These announcements weren’t on the master tape and therefore aren’t on the DVD, but MPI included off-air kinescope recordings of both announcements in the bonus features on their final box set, #26 (aka Disc 128 in the Complete DS box set).