“Do you think I’m fool enough to leave the power of the Hand in that body?”

Over the last ten months, mercurial trickster Quentin Collins has been just about everything it’s possible for a Dark Shadows character to be. Lover, scoundrel, zombie, ghost, mortal enemy and loyal friend, brother, father, uncle and antihero, black sheep and white knight, victim, villain, werewolf and wife-killer, teen idol, trading card, day player, pop star and devotee of the dark arts, he has seen and done and been it all. In a fiercely competitive narrative environment, he’s adapted to every new situation, the undisputed champion of 1969.

Now, a powerful wizard sits alone in the back room of his crummy old basement lair, calling on the fire and the air and the water and the earth — and hey presto, with a wave of the wand and a puff of smoke, Quentin Collins changes his mind again. 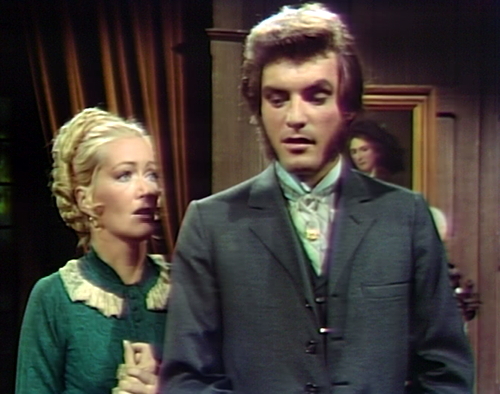 This begins one of the silliest and scariest and most compelling storylines that Dark Shadows has ever produced — the magical mystery body swap of Quentin Collins and Count Petofi.

Petofi blew into town three months ago, with what appears to be an endless supply of devious plans. He’s the mortal enemy of a tribe of revenge-minded respawning gypsy killers, who want to steal his sorcery by cutting off his legendary Hand with a golden scimitar. This is an occupational hazard for mythological supervillains that Count Petofi is desperate to dodge.

So he’s pieced together a crazy quilt of unlikely plot elements into a master plan, which goes as follows: make Quentin impervious to harm with a magic portrait, take over his handsome, ageless body, and then use a Chinese divination technique to astral-project himself seventy years into the future. This insane scheme is going really well so far.

And it works, because Quentin has taken over from Barnabas as the lead acrobat in this crazy circus, based entirely on David Selby’s endlessly mutable charisma. He can say and do pretty much anything, and we’ll believe it. This new twist in the tale gives Selby even more opportunities to be complicated and devilish, and it’s irresistible.

With Count Petofi as the new animating force behind his eyes, Selby gets the chance to project multiple conflicting messages. He’s seductive, conniving and triumphant — but he’s also desperately afraid that he won’t be able to pull this off, and he’s a little too hungry for reassurance that he’s actually getting away with it. 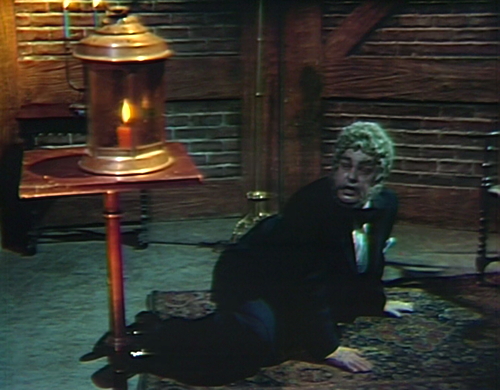 And then there’s Thayer David, Dark Shadows’ secret weapon, finally snapping his tether and rampaging through the crowd.

He’s always been fantastic and watchable — Ben Stokes was the emotional heart of 1795, and Professor Stokes embodies the eccentric comedy occult-expert that Dark Shadows so often requires. But he’s always been a second banana on the show, a weird scene partner available to interact amusingly with Barnabas, Julia, Angelique or Magda.

As a top-notch villain dominating the last third of the 1897 storyline, Count Petofi finally gave Thayer a starring role, and now, thanks to the body swap, he’s actually taking over as the main character. He’s the teen idol now, as difficult as that is to believe.

The job for this episode is to get the audience to go along with this bizarre transformation — that the old, weird-looking wizard is our beloved pop star sex symbol — and they accomplish this magic trick by putting us in Quentin’s place, resolving the mysteries from his point of view.

In the first act, we see Quentin from the outside — acting odd and brusque and surprisingly cheerful, renewing his false promises to Beth and not really explaining why. But as the second act opens, we see the world through Count Petofi’s eyes.

Following the magic ritual, he’s collapsed to the floor, his thick glasses falling to Earth he knows not where. He’s groping around blind, struggling to understand what’s going on, and the world is a blur, for him and for us. Aristede enters, and hands us the glasses, and things start to come into focus.

But we don’t know for sure what’s going on, until the Devil walks into the room and starts admiring his own cleverness.

Petofi:  You know, there’s an essential difference between us. Your mind is having great difficulty adapting to your new body, while mine is making the transition with incredible ease. Oh, my — how exhilirating it is, to be young and handsome, and so full of energy again.

(In Petofi’s body, Quentin is in utter shock.)

Quentin:  I don’t believe this is happening. It’s a nightmare I’m having!

(Petofi preens, looking at himself in a mirror.)

Petofi:  Tell me — how does it feel, to see yourself enter a room? Sort of like seeing yourself step right out of a mirror, isn’t it? 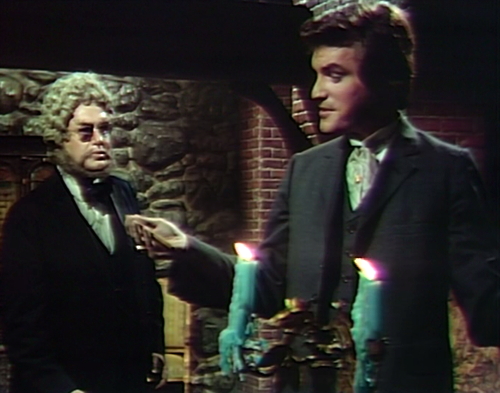 Most shocking of all, Petofi turns over his cards, tracing the connections between all of the loose plot points.

Petofi:  The fact is, I shall be needing this body.

Petofi:  Because it is the answer to all of my problems. It is my key to the future.

Petofi:  I have learned that without a host body to inhabit, only one’s essence can transcend time. Therefore, in order for me to go to the future, I must have a host body awaiting me. This is the host body.

Quentin:  How can that be? I belong to this time, not to the future!

Petofi:  It may interest you to know that Quentin Collins is alive, in the year 1969.

Petofi:  On the contrary, I made it possible. The portrait that Charles painted of you not only ended your curse, but it also gave you — or should I say, me — immortality. Yes, this body is not only alive in the year 1969, but it still looks as it does now.

Then he turns and lights a cigar off a passing candelabrum, like a boss.

It’s breathtaking — one crazy idea after another, tumbling out of Petofi’s mouth. The host body time travel rule is a recent invention, added to the story to give Julia a reason to visit 1897, so she could cover for Jonathan Frid during his month-long vacation. But here it is, the astral essence theory, in all its preposterous retcon splendor, revealed as the keystone to Count Petofi’s long-awaited evil scheme.

And in this moment, we are perfectly aligned with Quentin — stunned by the clever ruthlessness of it all.

Of course, it’s not enough for the bullies to steal Quentin’s body and hijack his destiny; they also have to humiliate him. So Aristede takes the old man’s glasses, playing a one-handed game of keepaway as Quentin stumbles around in a myopic fog.

“Now do you realize how vulnerable you really are?” Petofi sneers. “I would suggest that you do not interfere in my plans!”

Cringing, Quentin breathes, “It’s useless for me to go on living in this body. Why don’t you kill me? Get it over with!”

“I can’t do that!” says the mad count. “You see, the body you are occupying is also part of my plans!”

So, even in this moment when it seems like all has been revealed, they’re signaling that there’s even more plot twists to come. I don’t know if they actually have a plan to deliver on that promise, or if this is just a convenient placeholder for a plot point still to be determined. It doesn’t matter. It’s thrilling and insane. 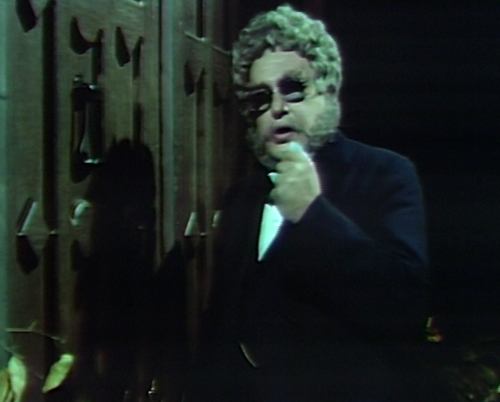 But my favorite part of this amazing episode comes when Quentin, trapped in his new Petofi costume, stands on the threshold of Collinwood — and Thayer David has David Selby thinks.

“I can’t go in there now!” he thinks, with the voice of Quentin whispering to himself on the soundtrack. “I could never explain what’s happened. No one would believe me.”

And that just makes me believe him more. That’s the unexpected detail that nails the body-swap storyline, the perfect twist on a Dark Shadows technique. We’ve grown used to the pantomime melodrama thinks monologues over the last couple years, and by now, it’s so common that we hardly even notice how weird it is, hearing audio captions over a shot of the character’s face. But it’s suddenly turned on its head, in a theatrical, self-aware, only-on-Dark-Shadows way, with one actor providing the thinks, as the other actor stands there and emotes to camera 2.

In a show where surprise is the only thing that matters, something strange and new has been born, right before our eyes. Let the games begin.

Tomorrow: All of Him.

When “Quentin” first approaches Magda outside the mill, she has a quiet little battle with the shrubbery. Her green wrap gets caught on a branch, and she has to quickly extricate herself while she’s saying her first line.

At the moment that Quentin looks at his hands and realizes he’s in Petofi’s body, somebody in the studio coughs very loudly.

One of the lines quoted above was edited for clarity — Petofi actually says, “Your mind and spirit are now in the body of Count Petofi’s.”

In act three, Petofi instructs Aristede, “We must be on we way.”

Tomorrow: All of Him.