“It sounds coocoo, going through a door that ain’t there!”

Anything is possible beyond the I Ching door… ANYTHING!

What, you need me to be more specific? All right. Dig this.

To start with, Quentin Collins is now Count Andreas Petofi, and vice versa. The mad Count has used his legendary Hand to exchange bodies with Quentin, because Quentin is immortal, and Petofi needs a host body to jump into when he uses the I Ching to travel from the late 19th century to the swinging sixties in order to escape a gang of angry gypsies. I agree with you, that’s a preposterous premise for a soap opera storyline, but if you leave Dark Shadows alone for a while, then that’s the kind of thing that they come up with.

The body swap is a farce storyline as seen almost exclusively in comedies, including Freaky Friday, Gilligan’s Island, The Hot Chick and Captain Underpants and the Big, Bad Battle of the Bionic Booger Boy, but Dark Shadows is committed to playing it as serious drama for Quentin, to the extent that anything on Dark Shadows can be serious drama.

Of course, they’ve done lots of possession stories before — maybe thirty percent of Dark Shadows is about somebody acting according to somebody else’s will. A couple months ago, Count Petofi went on a possession spree, with Jamison acting like Petofi, Edward inhabited by a butler, and Charity becoming a music-hall mentalist who’s still refusing to vacate the premises. These days, Kitty Hampshire is suffering from Intermittent Josette Syndrome, and if it turns out that she’s actually a reincarnation of Josette, then I suppose she’s being possessed by herself, which is a neat trick if you can manage it.

But they’ve never gone full body swap before, forcibly decanting the original inhabitant into his tormentor’s body. Quentin is now trapped inside a weak, elderly lunatic with no friends and negligible sex appeal, and we’re meant to appreciate the helpless horror of it all. 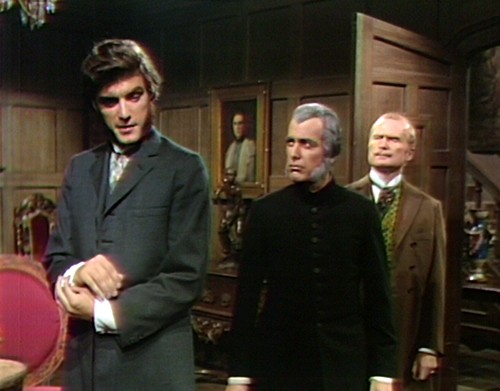 Although I suppose the question on the table is whether Quentin and Count Petofi are actually different people in the first place. The villainous madman finds it fairly easy to slip into Quentin’s role, because our antihero isn’t exactly a Boy Scout himself.

At the top of today’s episode, he walks into a fight between his brother Edward and the wretched Reverend Trask over who controls the Collins fortune. This is an issue that doesn’t affect Petofi directly, and therefore he’s utterly bored by the topic, which is pretty much the same way that the real Quentin would react. He just walks over to the liquor cabinet and drinks brandy instead of listening to people, a typical Quentin Collins power move.

Trask lays into “Quentin” for seducing Amanda, setting her on the path toward ruin and then forgetting about her, which is true. Yes, the real Quentin is currently more or less tormented over the fact that Amanda skipped town without him, while Petofi couldn’t really care less, but those are details. Quentin’s love affairs with Jenny, Laura and Beth all ended in murder attempts, and he simply moved on to the next one. Petofi is just accelerating the Amanda-abandoning process that would have happened eventually anyway.

After Trask storms out, Edward gives his supposed sibling the side-eye. “Something is different about you,” he observes. “What is it?” But something is always different about Quentin — he’s turning into a werewolf, or making friends with a vampire, or juggling several simultaneous girlfriends. “Different” is Quentin’s home address.

Meanwhile, the real Quentin is sitting around in Petofi’s body and feeling sorry for himself, and that’s more or less what Petofi would be doing anyway, just on a different set and looking straight into the camera.

I mean, if you think about it, there really isn’t a lot of daylight between these two characters. They’re both haunted by the curse of a relentless gypsy, neither of them has a job, they don’t care what happens to the Collins family, and they spend all of their time drinking and worrying about themselves. Pretty much everyone in the 1897 storyline is aggressively self-centered, but Quentin and Petofi are the champion brooders on the team.

Oh, and they both want to experiment with dark magic, using innocent people as their research subjects. Quentin uses his nephew for this kind of project, but Count Petofi doesn’t have a family, so he has to send his henchman down to the docks to pick up a spare streetwalker.

Petofi’s trying to figure out how to transport himself through time to 1969, and he needs some volunteers to help him crowdsource the right hexagram. He knows that Barnabas and Julia time-travelled using one of the 64 I Ching hexagrams, but he doesn’t know which one, so he’s going to throw people at the problem until he finds the magic key.

Of course, this docks set is usually Barnabas’ hunting ground, so maybe Barnabas is Count Petofi too. This might be spreading; pretty soon, everybody’s going to be Count Petofi. They should probably stock up on wigs and cigars, while there’s still time. 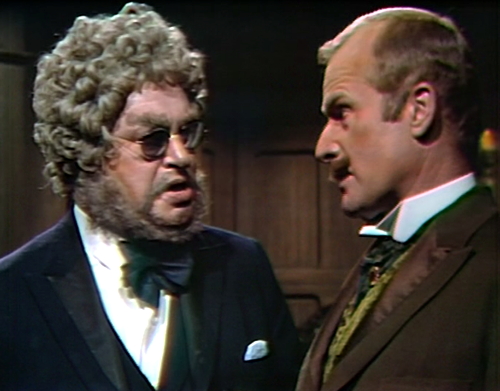 While Petofi is away, organizing his baleful research project, Quentin tries his luck at Collinwood. He attempts to reach out to Edward, begging for his assistance, and the scene is a perfect example of the way Dark Shadows has learned how to mix horror and comedy. Quentin is taking this dilemma seriously, but for Edward, it’s a farce.

Quentin:  I must speak to you.

Edward:  (pouring a brandy) What is it, is there something wrong?

Quentin:  Something is terribly wrong. Edward… I am Quentin.

(Edward raises an eyebrow, and then returns his attention to the cocktails.)

Quentin:  Do you hear me? I am Quentin! Edward, you can forget about the brandy.

Edward:  I assure you, if you were Quentin, you wouldn’t forget about the brandy.

It’s a great comedy-of-manners line, a Violet Welles special, tailor-made for Edward to deliver. But as Edward points out, “When you say something so patently absurd, how do you expect me to take it, except as a joke?”  Quentin’s nightmare is just an odd delusion for Edward.

Edward:  My dear man, I know I suspected you, but time proved to us that the things that happened around this house happened because of Barnabas Collins.

Quentin:  No! It wasn’t Barnabas! It was Petofi!

Edward:  I find this all very confusing.

It’s actually both, and that’s the fun of this storyline. It’s a mistaken-identity runaround that will end in mass murder.

So it’s only natural that in the darkest moment in today’s episode — the sacrifice of an innocent life, on the altar of Petofi’s personal escape plans — they bring in a comedy prostitute.

Aristede tells his master, “This is Wanda Paisley,” and the audience says, yes, of course it is. Wanda Paisley doesn’t have the most tragicomic name ever given to a Dark Shadows redshirt — that honor goes to werewolf victim Dorcas Trilling — but she comes close. Wanda Paisley!

And she’s not just another doomed prostitute; Wanda is something special. When Aristede introduces her, she sh’booms up to the handsome gentleman, and smiles, “Why didn’t you tell me you had a friend?”

Petofi says, “I hope you don’t mind, Miss Paisley,” and she sure doesn’t. “Oh, not at all,” she chuckles, preening. “As long as there’s champagne for Wanda.”

Now, I believe that might be the first time a prostitute has ever agreed to a three-way on national daytime television. I don’t have evidence to back up that claim, but it seems likely to me. 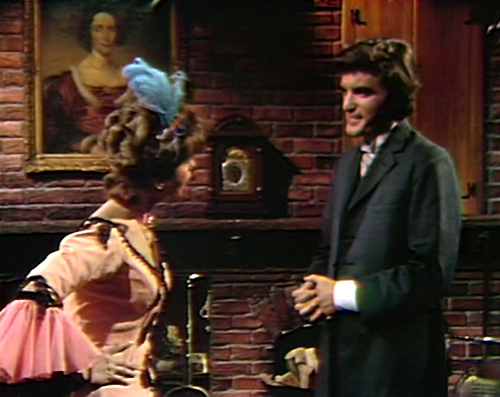 But Count Petofi’s aiming in a different direction, kind of. She reaches for the I Ching wands, and he snatches her hand away.

Wanda:  What’s the point in that?

Wanda:  Well, that depends on what happens in the game, if you know what I mean.

Petofi:  I know what you mean.

Yeah, so do I. What is going on with this show? I swear to god, this used to be 1969 afternoon television.

Wanda gets a bit spooked when Petofi explains that she’s going to go through the I Ching door in her mind — “There ain’t no doors in my mind, honey!” she exclaims — but Petofi uses his magical Hand to ensure compliance.

She rolls up Hexagram #34 — Da Zhaung, the Hexagram of Vigor, if you’re playing along at home — and what do you know? It turns out there’s a door in her mind after all.

What follows is one of the all-time great trance sensations. As Wanda concentrates on the I Ching hexagram, the doors of perception open, and she’s presented with two waggly skeleton arms.

Then there’s a lengthy laughing-skull phase, where a bug-eyed skeleton laughs and laughs at her. I guess this is supposed to be the “Vigor” part of the experience.

Wanda screams her head off, and we see the skeleton with its arms raised into “BOO” position, as seen in every elementary school classroom in October… 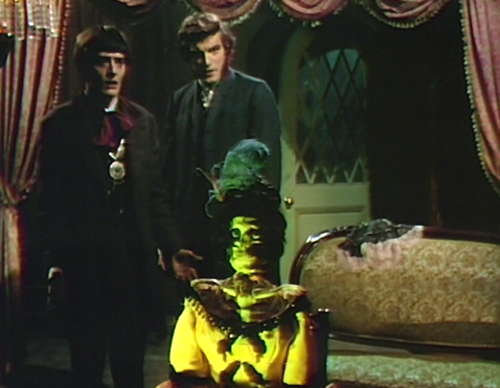 And then we return to the cottage, where Wanda Paisley has transformed into a bug-eyed skeleton that still has a hat on.

So as you can see, anything is possible beyond the I Ching door… ANYTHING! And I guess that’s where we came in.

Tomorrow: The Woman Who Wasn’t There.

When Edward opens the drawing room doors and invites Petofi into the room, you can see a couple yellow blocking marks on the floor.

Petofi steps on a Trask rant:

Trask:  You are incapable of loving anyone!

Petofi:  Are you fin–

Trask:  Of caring for anyone, except for yourself!

Petofi:  Are you quite finished now, Trask?

When Edward tells Petofi that Kitty is drawn to him, there’s the sound of something (or someone?) falling down in the studio.

Someone in the studio coughs when Wanda is concentrating on the hexagram.

Tomorrow: The Woman Who Wasn’t There.