“It may be the only way we’ll find out where the coffin is kept.”

Okay, here’s a rundown on this evening’s menu.

Dirk Wilkins has just risen as a vampire tonight, so obviously the first thing he has to do is set up his coffin. He stashes it in a room that everybody keeps saying is the basement of a farmhouse, and I don’t feel like arguing about it again, so fine. I will just point out that a) there is no farm, b) there is no farmhouse, and c) this looks nothing like a basement, but like I said, I don’t want to fight about it. Basement of a farmhouse. Roger that.

After Dirk gets his coffin set up, he goes out for a prowl. Returning to the farmhouse, he walks down into the basement, and there’s hapless fugitive Tim Shaw, just sitting there like a Christmas basket. So that’s meal number one.

Then Dirk strolls over to the Old House, which is an odd choice, since Barnabas is leading the vampire hunt. But nothing gets in Dirk’s way, not tonight. He rolls in, finds his old boss Judith Collins, and bam! He bites her too.

That’s a good first night out, so Dirk heads back to the farmhouse, and guess what he finds in the basement: girl governess Rachel Drummond, who’s looking for Tim. So Dirk bites her too, and now he’s got another blood slave. He’s building a whole staff; he must be getting a softball team together or something.

So, I’ve got to say — I have been watching Dark Shadows for what is it, more than two years now, and I have never seen this kind of performance out of a vampire before. Three takedowns in one night, and literally the only thing he did is walk from his coffin to the Old House, and then back. This is clearly a world-class vampire. Somebody needs to get J.D. Power and Associates on the phone.

Meanwhile, veteran bloodsucker Barnabas Collins has been making nothing but rookie mistakes lately.

You see, Barnabas doesn’t want anybody to know that he’s a vampire, so obviously he’s been telling everybody that vampires don’t exist. Except, no, he’s done exactly the opposite of that. He’s been telling everyone that Laura was a fire demon, that the crazed animal who turns up once a month is a werewolf, and that finding puncture wounds on a person’s neck proves that there’s a vampire around.

He’s basically been holding a graduate lecture series on fighting supernatural threats, and he thinks that everything will be fine as long as he can point at Dirk, and say, Look over there! This is not the absolute stupidest plan that Barnabas has ever come up with, but it’s got to be in the top ten.

So now Edward has a plan of his own. He’s got Judith — still dazed and blood-spattered — hidden in the drawing room, and he says to Barnabas, do you think a vampire’s victim would respond to the sight of the supernatural monster who attacked her? and Barnabas says, yes, I suppose so, and Edward says, I’m going to try it out as an experiment, and Barnabas says, when? and Edward says, RIGHT NOW!

And then he whisks open the drawing room doors, and Judith is face to face with Barnabas, and she says, Good evening, Barnabas, and then everybody stands there, trying to think of something to say.

So please keep this in mind, if you’re planning any upcoming social events: accusing your guests of being inhuman ghouls can make for an awkward evening.

Then it’s back to the dungeon, where Dirk has Rachel all good and mesmerized. He’s running her through an onboarding process, which is mostly telling her not to worry about things. She doesn’t understand what he’s talking about, but he says, “Before this night is over, you will.” Which means that he has even more top-shelf vampistry up his sleeve. I hate to blow things out of proportion based on a couple of episodes, but we might want to take a good, hard look at Barnabas, and see if we’re possibly in the market for a new main character. 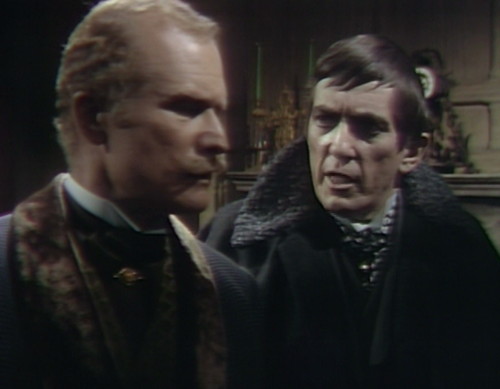 But maybe I’m being too harsh. Barnabas was just warming up before; let’s give him a minute to get things organized.

Back at Collinwood, they’ve put Judith to bed, and Barnabas tells Edward to make sure she’s safe.

“I want you to watch her carefully,” Barnabas says, “especially if she wakes up.”

“Well, because the vampire may try to communicate with her, or even try to lure her away from the house.”

“You won’t be able to prevent it,” says Barnabas, which is not entirely helpful. “She is completely under his power.”

Naturally, Edward is wondering what to do with this handful of mixed messages, and then Barnabas hands him one of those postcards from the infinite.

Edward is baffled. “And have that maniac attack her again?”

“Edward,” Barnabas announces, “it may be the only way we’ll find out where the coffin is kept.”

And there you have it. That is Barnabas’ plan. 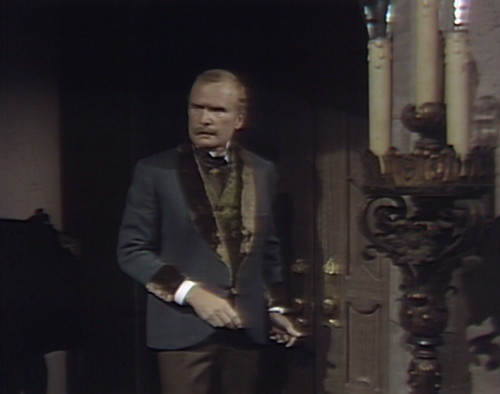 So Barnabas goes outside to look for Dirk. He doesn’t say how he’s planning to do that; I suppose he’s going to consult with Ziggy or Huggy Bear or the Machine from Person of Interest or check the Space-Time Visualizer or just pound the pavement or whatever.

And Edward is left alone in his enormous haunted house, under specific instructions to both protect his sister and simultaneously allow her to be attacked by a vampire. He is not entirely successful.

The house starts acting even more haunted than usual — the doors fly open, the lights go out, there are bumps in the night. In the foyer, an unfamiliar looking vase of petunias smashes to the floor; Edward should probably look out for plummeting sperm whales, just in case Dirk’s got hold of an Infinite Improbability Drive. 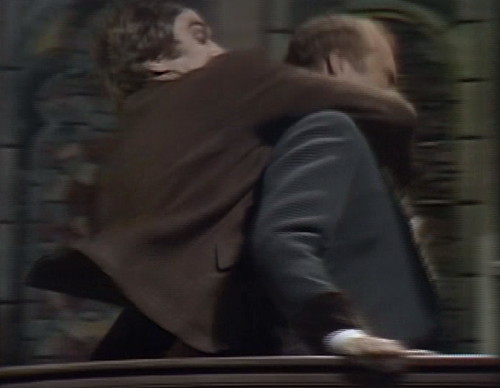 Edward heads back upstairs, but when he gets to the landing, he hears the front doors open again. “Who’s there?” he cries, and then Dirk leaps out from the other direction and grabs him and wrestles him to the ground, because DIRK IS AMAZING AT THIS.

I swear, I have never seen such an unbelievably effective vampire. He is like the Bruce Lee of whatever he’s doing.

Once Edward’s out of commission, Dirk goes and conferences with Judith and the Ralston-Purina lamp.

“You will leave this house at dawn,” Dirk says, “and you will take this with you.” And then he hands Judith a loaded gun, which is so cool I can’t even stand it. 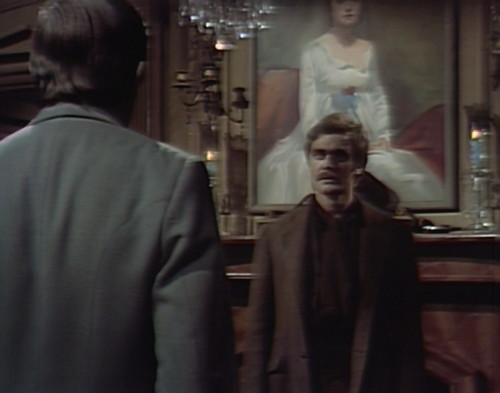 Meanwhile, Barnabas’ plan was apparently to go home and think things over for a while, and then suddenly he turns around and Dirk has appeared behind him. Dirk says that he wants Barnabas to bring his dead girlfriend Laura back to life, which Barnabas can’t do, because he can’t do anything these days.

I mean, let’s face it: Barnabas has sold out.

He used to be the rebel who turned this boring little hick town upside down. This is the guy who shot his uncle in the face, and married the wicked witch, and wiped out his entire branch of the family. He got locked up for a hundred and seventy years, and when he was finally sprung, he went right back to kidnapping people and endangering the ten-year-olds. Then he conquered the land of dreams, and enagaged in psychedelic mad science experiments to create a whole new kind of human being. He used to be cool.

But now he’s gone totally corporate — he’s hanging around with the landed gentry, and defending the institutional status quo. And look what he’s doing right now — he’s leading a vampire hunt. How much of a sellout could you possibly be?

So it might be time for the next generation to step up. This is Dirk’s world now.

When Edward runs onto the foyer landing to shout, “Who’s down here?” there’s some kind of weird feedback from the mic.

Dirk approaches Judith’s bed and says, “Listen to every word I have to say.” At that moment, there’s a thump from the studio.

When Judith walks into the farm cellar, you hear a music cue almost start up, but then go backward and stop. 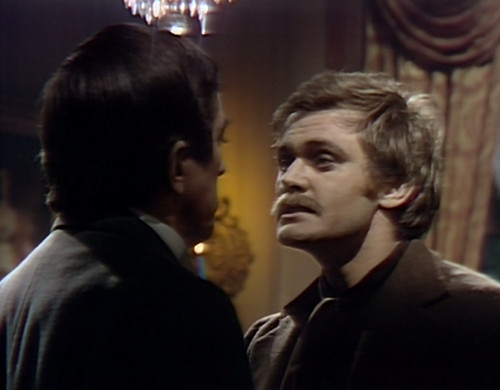