“I thought it unusual, to say the least, to find an empty coffin here.”

Hapless quisling Timothy Shaw is on the lam, unjustly accused of a murder that he did technically commit. Earlier in the evening, Tim dumped nightshade into his boss’ tea, acting on a post-hypnotic suggestion so irritating that I’ve decided I will never try to explain it again.

So now he’s found his way to Peabody’s Farm, which is on the Collins estate somehow, and he crawls down into what appears to be an abandoned mining shaft with no obvious agricultural purpose. It’s a mess of bricks and greasy black stone, held up with timbers at awkward angles. You couldn’t keep animals down here, or food, or equipment, or plum preserves or whatever imaginary farmers don’t keep in the weird mixed-use storage dungeons that they have no reason to build.

The only thing a person could use a room like this for is to store the empty coffin of a newly-risen vampire, so that’s what Tim bumps right into. I guess it’s true what they say: you can run and run, but you can’t run away from your own terrible hairstyle.

Tim hears somebody coming down the stairs, so he kind of crouches in the corner, and waits for the newcomer to enter the room. Then he stands up and shouts “DIRK!”, because Timothy Shaw is terrible at hiding.

Here he is, a wanted fugitive, and he thinks that the best way to keep a low profile is to shout the name of the first person who comes through the door. What a maroon.

As it happens, Dirk is supposed to be hiding too, because he’s recently risen as a vampire, and to be honest with you, it has done him a world of good. He’s got dark black makeup under his eyes, and he’s speaking in a low, musky tone, standing still and observing Tim like a hunter stalking his prey.

Roger Davis is pretty universally disliked among Dark Shadows fans, because his characters tend to be petty whiners, getting upset over nothing, just scowling and bellyaching and generally being unpleasant. He also spends a lot of time rubbing his head, indicating that he’s confused or upset or hurt or anguished or excited or nervous. You name the emotion, and world-class phrenologist Roger Davis will rub his head in the appropriate location.

But now he’s keeping still — just staring at Tim, and calmly discussing his imminent murder — and, damn. All right, then. Against all odds, I have found a use for Roger Davis. 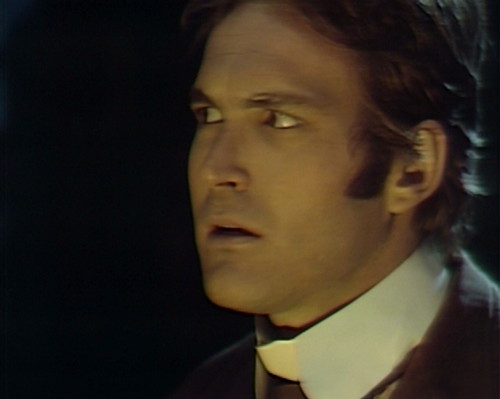 Dirk points at the coffin in the center of the room, and says, “You did notice this when you came in, didn’t you?”

“I did, yes,” Tim says. “I thought it unusual, to say the least, to find an empty coffin here.”

Dirk says it’s not empty during the day, and Tim asks what’s in it during the day, and Dirk just stares at him and says, “I am.” And at that point, it’s just a matter of time before he flashes the fangs, and Tim learns some important lessons about trust and body language and eye makeup and power and homoeroticism and keeping your trap shut every once in a while. Too late to do him any good, of course, but at least it’s been an educational evening. 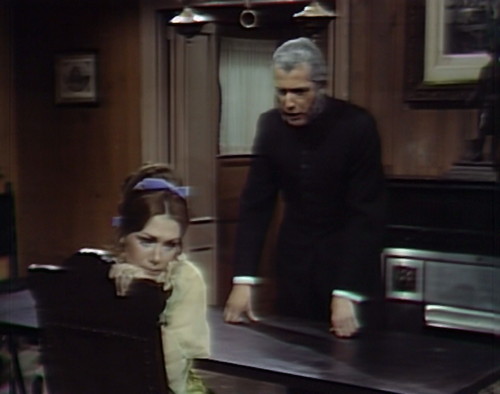 Trask knows the real story behind the murder that Tim didn’t mean to commit — see above for my policy on discussing that plot point any further — so he’s really just yelling at Rachel for the exercise. When your entire career is based on yelling at people, you have to stay in shape. 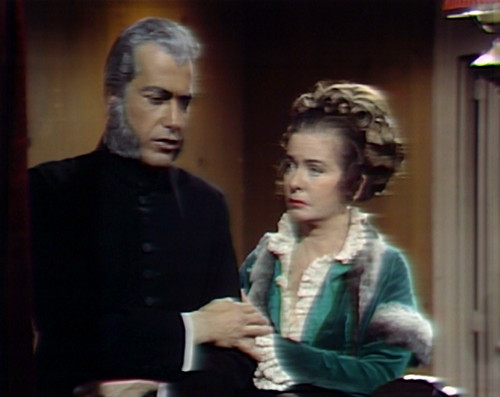 This is a Gordon Russell script today, and as we’ve discussed recently, Gordon’s main strength is in moving pieces around the board to get the plot points lined up. There are five characters and three locations in this episode, and every scene involves somebody walking in the door, or running out the door.

It’s like a game of musical chairs today, where the characters move from one set to the next, and whoever ends up in the same place as the vampire gets attacked. So every scene has to give somebody a rationale for moving on to the next location.

In this scene, Judith has arrived at the school to comfort Trask on his loss, and they discover that Rachel’s gone out to help Tim, like everybody knew that she would. Trask wonders who Rachel and Tim would rely on for help, and Judith suggests that Rachel might go to Barnabas — he’s very fond of her, and would surely give her assistance.

Judith decides that there’s only one thing to do — get in her carriage and ride to the Old House, so that she can get there before Rachel does, and make sure Barnabas knows about Rachel’s involvement in the evening’s activities.

Now, Judith doesn’t really have that strong of a motivation for this — she’s suddenly acting like she travels around in the Mystery Machine, solving crimes — but, as I said, it’s a Gordon Russell script, and different rules apply. Judith needs to get to her next location, so off she goes. 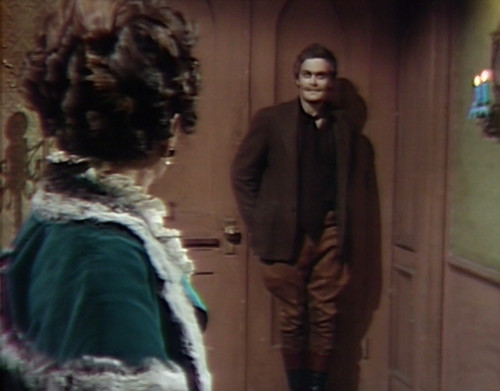 Nobody’s home when Judith reaches the Old House — not Barnabas, Beth or the gypsies, because in Gordon’s world people who aren’t in today’s episode don’t exist, and locations are just holding pens for plot points.

And guess what: then the door opens and Dirk walks in, for absolutely no reason that you could ever imagine. Here’s the rundown on how weird this moment is.

And yet here he is, closing the door behind himself, grinning with that Cheshire Cat smile that implies that his cunning plan has worked out perfectly.

So we get another sexy-serial-killer sequence, where Dirk snarls and snaps at his former boss, and backs her up against the fireplace through the power of makeup and personal magnetism. He does a whole routine about how the mistress is going to become the servant, and the servant the master, and then he unleashes the fangs.

They’ve never really established that Dirk was carrying around a Judith-related grudge — as far as I could tell, he was a model employee, who cared about doing a good job and earning the Collins family’s trust. But we’ve got to get Judith bitten up, and this is the most interesting way to do it, so they might as well have some fun with it.

Dirk leaves the barely-conscious Judith propped up in a chair for no particular reason, except to give Rachel something to look at when she arrives at the Old House and looks in the window. Seeing Judith, she takes off, and by now you should know exactly where she’s going. She can’t stay here, and she can’t go back to the school, and today there are only three locations in the world. 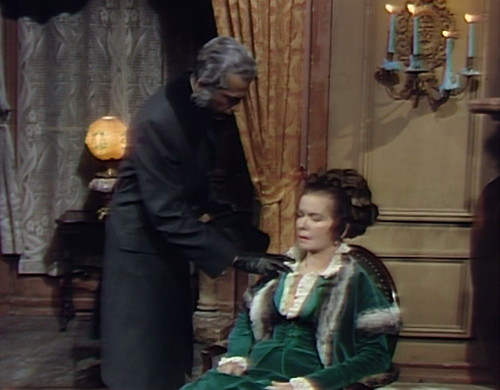 Just to drive that point home, as soon as Rachel’s safely off-camera, Reverend Trask shows up at the Old House for no reason at all. “I decided to come and offer my  assistance,” Trask announces, as if Judith needs assistance speaking to Barnabas.

But Gordon’s not even bothering to come up with rationales at this point. Trask is here because Gordon wants him to discover the marks on Judith’s neck. Plus, he doesn’t even know about Peabody’s Farm, and he has to go somewhere. 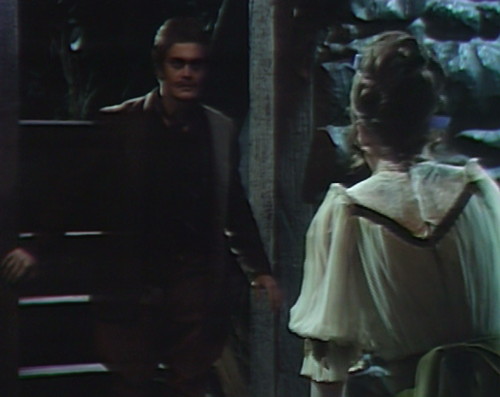 And we finish today’s lap around the estate back at the farm dungeon, where Rachel is the second person to stumble into Dirk’s mega-secret Fortress of Solitude in the last twenty-two minutes.

And he’s still hungry! What are the odds?

Judith stumbles a bit when she tells Trask her plan: “Rachel is traveling on foot, I have a carriage. I’ll get to the Old House first. I’ll tell cousin Barnabas what’s happening. When he’s aware of the details, he won’t give any help to either — uh — Timothy, or — Rachel.”

When Judith gets to the Old House, she raps with the knocker on the front door. The doors are barely closed, and her knocking makes the door start to swing open. She looks in the window, sees a light on, and then returns to the door, rattling the doorknob a couple times as she pretends to let herself in through a door which is obviously already open.

In the Dark Shadows Reunion special released on by MPI in the DVD set, there’s a panel discussion that mentions this episode:

Roger Davis:  I do remember being very excited when I got to be a varmpire on the show, so excited, and the first person that I got to bite was Joan Bennett, and I was so enthusiastic and excited I knocked her over — flat on her back!

Jerry Lacy:  I remember when you did it, it was rehearsal in the morning.

Jerry:  Yeah. You grabbed her, and you bit her, and then you just threw her. And she was already sixty years old then.

Lela Swift:  Then we had to pick Joan up and put her together again.