“Dorcas Trilling, you are a great comfort to me.”

This is the first time we meet Dorcas Trilling, sycophant and instructress at Reverend Trask’s sleepaway punishment school for inconvenient children, and within seconds, she’s working our last nerve. 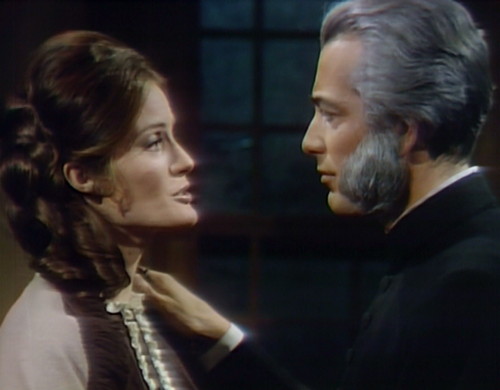 “You inspire me, Reverend Trask,” she says, simpering, and if there’s one thing that an audience can’t abide, it’s simperers. There are very few beloved henchmen in the canon of Western literature; basically, there’s Smithers in first place, and everyone else is in a thousand-way tie for last.

Dorcas is tattling on Rachel, the former Collins family governess who’s working at the school for reasons that aren’t particularly relevant right now. The only thing that matters here is that Dorcas is instantly hateful. She’s fawning over her terrible boss, feeding his ego and making herself available for inappropriate contact. 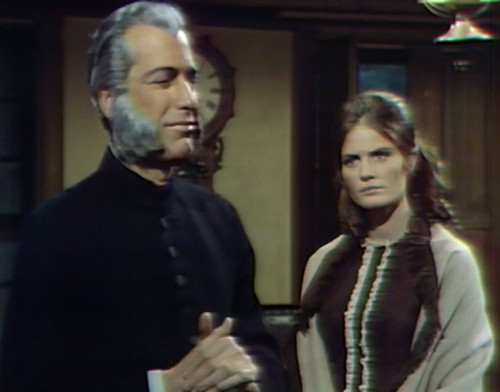 “You have heard Rachel accuse me of cruelty,” Trask says, “because I locked Jamison in the ‘meditation room’.”

“How well you put it, Dorcas,” Reverend Trask says, and begins another round of shoulder-groping.

You know, I wouldn’t have thought it possible, but this new Reverend Trask has become a charismatic cult leader, miles away from the original witch-hunting Trask’s nonstop solo anger machine. This descendant can do the crazy ranting of his namesake, but he can also downshift into this smarmy false-humility mode that seems to inspire women into begging for a hostile work environment. I never would have thought that Reverend Trask would be such a hit with the ladies.

So let’s talk about redshirts, and their narrative uses. The term was coined by Star Trek fans, who noticed that the teams for dangerous planetside away missions always included major characters like Kirk, Spock and McCoy, along with a couple of one-shot nobodies on the security team.

The major characters are planetside so they can be heroic adventurers, while the gentlemen in the red shirts are there to be killed by Stormtroopers and pod plants and Dikironium cloud creatures. Early deaths are an important part of an adventure story with life and death stakes, establishing that there’s a credible threat to the heroes even though everybody knows that there’s no way Spock is going to be taken down by a pod plant.

Now, obviously, turning your soap opera into an adventure story is sheer madness — a soap opera is supposed to be a long-term enterprise where the audience invests in the characters’ development, while adventure stories are generally episodic and stocked with minor players who can be thrown into the firing line just in time for the main characters to notice the danger and avoid it. 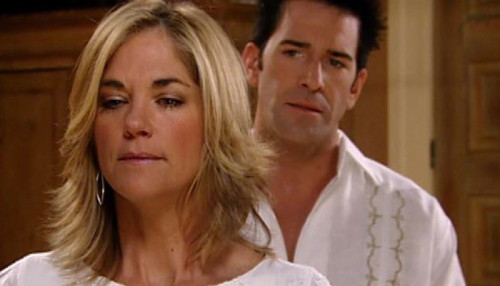 But Dark Shadows is far from the only soap that’s indulged in the dark business of ritualized redshirt slaughter. In the mid-2000s, lots of network soaps ran serial killer storylines where victims were picked off one by one until they reached a main character and stopped. My other favorite soap, One Life to Live, actually did three serial killer stories in the space of six years, despite the fact that they drag on endlessly and never result in the ratings bonanza that the producers seem to expect.

Soap opera serial killer stories all follow the same basic pattern. Victims 1 and 2 are the real day-player redshirts, who are essentially there to help the killer announce himself. The first one is just a mysterious death, so you also need a second one so that the police officers can realize there’s a pattern. The killer is essentially clearing his throat, and getting everyone’s attention.

Victim 3 is a character created six weeks ago, just long enough to be recognizable when you pin her headshot to the wall. Victim 4 is a mid-tier character, who either dies or survives, depending on whether you were planning to cut them loose anyway. This may be someone in law enforcement who’s getting too close to the truth, if you have any. Then victim 5 is the top-tier character who everyone says is “the real target”; this is the one we’re supposed to worry about.

Dark Shadows has followed this pattern a couple times this year, starting with young werewolf Chris Jennings. His first two kills were day players — Mr. Wells the hotel clerk and a nameless barmaid, who didn’t even have any lines besides screaming as she was torn to pieces.

For victim 3, Chris killed Carolyn’s friend Donna. In a modern soap, she would have been the six-week minor player, but Dark Shadows can’t afford to create short-term cannon fodder, so she was only there for a day. The funny thing about Donna is that they made a special effort to encourage us to dislike her before she was killed; she was annoying and aggressive with Chris, and as soon as her back was turned, Carolyn told everyone that they’re not even very good friends. Also, she had a red shirt on.

Then victim 4 was Joe, who was severely wounded but not killed, and then we can start worrying about major characters like Carolyn.

Quentin’s ghost started out with an attempted murder on a major character — Roger, who was tripped by a wire and fell down the stairs. This isn’t common practice, but he survived without serious injury, so I’ll allow it.

Quentin’s next two victims were comedy psychic Madame Findley and comedy silversmith Ezra Braithwaite, who lasted just long enough for us to fall in love with them before they were killed. On Dark Shadows, you can always tell whether you’re supposed to like the monster by how appealing the early victims are. Chris was a romantic lead, so his first three kills were people we didn’t know or didn’t like. But Quentin’s ghost was a sinister spectre, so his redshirts were both lovable eccentrics.

Even Barnabas took a couple practice swings in 1967 — biting Willie’s wrist, and draining some local cows — before settling on Maggie as his real target. And now, every time he goes into the past, he warms up with a couple dockside prostitutes before moving on to people that we care about. 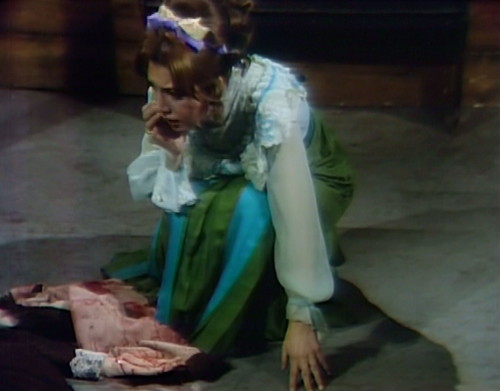 So now that we’ve got a new monster roaming the great estate of Collinwood, we need an expendable victim or two before we move on to the main event. Enter Dorcas Trilling, believer in righteous cruelty.

Like the Ancient Ones in The Cabin in the Woods, the dark gods of serialized narrative demand a ritual sacrifice. But that’s the thing about redshirts, I suppose; here today and gone tomorrow. Actually, gone about three-quarters of the way through today, if you want to get technical about it.

It’s a shame that Dorcas is wearing brown, instead of the traditional color. Oh well, I guess it all ends up red anyhow.

Tomorrow: The One Where Evan Ruins the Carpet.

At the beginning of act 1, Rachel has a terrible time closing the front doors, and they swing open as soon as she walks away.

The clock in Trask’s schoolroom is stuck at 10:00, from act 1 all the way through the end credits. It’s still 10:00 when we return to the school on Wednesday.

Isn’t Beth fired? Judith dismissed her on Friday, and she was planning to leave with Quentin. But now Quentin’s not feeling well, and they all get distracted. She’s in every episode this week, and nobody mentions that she’s not working at Collinwood anymore. As far as I know, it’s never mentioned again.

Tomorrow: The One Where Evan Ruins the Carpet.