“This was because Barnabas was only partly dead.”

Quentin Collins has been up all night, worrying about gypsies. He killed his wife Jenny yesterday, and as a result, Magda put a curse on him that will last all the days of his life. He’s terrified, naturally, as anyone would be, but eventually nature gets the better of him, and he settles into an uneasy doze.

It’s May 1969, and we’re currently nine episodes into a twelve-episode run where Quentin is in every episode. Today, he’s in almost every scene. I made a big deal last week about Quentin winning the Stand Next to Barnabas competition, but honestly, it might as well be the Stand Next to Quentin competition by now.

He’s involved in every storyline, in a more natural and organic way than Barnabas is. Laura, Jenny, Magda, Jamison — this is Quentin’s family, not Barnabas’. There are two different moments this week when people apologize to Barnabas for burdening him with family problems. He’s actually an outsider. This is Quentin’s world.

And this isn’t just happening on screen, of course. In the world outside ABC Studio 16, the public has taken notice.

Now, I know I’ve already written a couple posts on the subject of David Selby Figures Out He’s Famous, but I’m doing it again today because there’s an interview on the DVD where he is so amazingly cute about it.

“Obviously, after I did the show for a while, I realized the show was successful, and that this particular character, Quentin — you know, you began to have a feeling of, or a wonderment, because that was the nature of the beast, I think — is this character getting across to the people who are watching it? Are they going to like him — and then it becomes, are they going to like me? (chuckle) You start taking it all personally.”

Because David Selby is basically the cutest person of all time. He never says, “Yeah, I was amazingly famous and everybody loved me.” I don’t know if it’s a West Virginia thing, or a late 60s soap opera thing, or what. But he always says that people responded to the character, which is adorable.

“And then a lot of letters started coming in to the studio, just tons of letters, I mean thousands of letters for, uh, Quentin — and as such, David Selby, who was playing the role. So many, in fact, that I found I was overwhelmed. They didn’t even give them to me. I remember seeing boxes and boxes full. And I began to sense that, oh my goodness, the character was getting successful.”

And then get a load of this:

“And of course, then 16 Magazine came in, and when 16 Magazine and Gloria Stavers came aboard, and started taking so many pictures, and calling me, and  I started doing all of this publicity for the show via 16 Magazine and all that, then I began to realize — because they told me, basically — that Quentin had a lot of fans across the country. And I must say, that was quite special.”

So, 16 Magazine, we meet again. I mentioned 16 about six months ago in the “Win a Date with Jonathan Frid” post, as one of the publications that started following Jonathan Frid around, asking uncomfortable questions about his home life.

16 Magazine looms large over this period of the series, because by this point it’s basically become the de facto Dark Shadows Fan Club newsletter. 16 covered other things besides Dark Shadows, of course — there’s also the Cowsills, and the Monkees, and Bobby Sherman, and Saj and Stefan and Enzo and other people I’m not familiar with.

But in every 16 issue in 1969 and 1970, there’s at least six or seven pages of Dark Shadows material a month. Pin-ups, interviews (both real and make-believe), actor bios (ditto), storyline synopses, contests, quotes, what have you. At some point, they start soliciting letters to the Dark Shadows stars to be sent directly to the magazine, and then they print the stars’ responses (both real and make-believe). Apparently, 16 was the official publicity agent for Dark Shadows, and vice versa.

It’s in this month’s issue — cover-dated May 1969 — that David Selby makes his first appearance in the pages of 16. This is, of course, the issue that has a pink rabbit magician on the cover, pulling a handkerchief out of a top hat decorated with the faces of Bobby Sherman, David Henesy, Davy Jones and three other kids who are probably Cowsills or something.

In 1969 and 1970, 16 covers always had photos of the stars’ heads superimposed on an illustration that showed them all hanging out together, often in the company of an enormous animal. I have no idea why this was the case.

Starting in 1969, 16 ran a monthly series of articles called “The Whole True Story of Dark Shadows“, which told the entire story from the beginning, based entirely on vague memories and with no access to videotapes. It went something like this:

The very first time Angelique looked at Barnabas, she fell madly in love with him. The portraits of Barnabas and Josette were painted as the wedding plans were being formulated. But on the eve of the big wedding, Barnabas, Josette and Angelique all disappeared! (More about that in a future chapter!) So Barnabas’ and Josette’s portraits were hung in the old house — and many years later, David Collins, who used to play there, claimed that he actually “saw” Barnabas and Josette and talked with their “ghosts”!

It’s great. And in the next paragraph, you get this sentence:

The ghost of Josette (actually Josette’s life force has been reincarnated in Vicki’s body) comes to Vicki’s rescue.

So there’s your challenge, make sense of that.

A couple issues later, in the May issue, there’s a two-page article (chapter 4 of “The Whole True Story”) which is nothing but a series of retractions for everything they wrote in the previous chapters. Apparently, Dark Shadows fans with longer memories got in touch with the 16 Magazine top brass and gave them a talking-to.

David Collins talked to Josette’s ghost, but never to Barnabas’ ghost. This was because Barnabas was only partly dead. The portrait of Barnabas (as he looked in 1795) never hung in the old house. It has always hung in the present Collinwood.

It is doubtful that Vicki is Josette’s reincarnation, because Vicki’s and Josette’s spirit actually exist simultaneously in the past and present.

So that clears everything right up, doesn’t it? Thank goodness that’s settled. 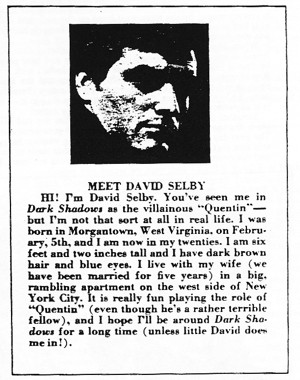 Anyway, the point is that there’s a little sidebar on the retractions article that says “MEET DAVID SELBY”.

HI! I’m David Selby. You’ve seen me in Dark Shadows as the villainous “Quentin” — but I’m not that sort at all in real life. I was born in Morgantown, West Virginia, on February  5th, and I am now in my twenties. I am six feet and two inches tall and I have dark brown hair and blue eyes. I live with my wife (we have been married for five years) in a big, rambling apartment on the west side of New York City. It is really fun playing the role of “Quentin” (even though he’s a rather terrible fellow), and I hope I’ll be around Dark Shadows for a long time (unless little David does me in!).

And from then on, obviously, David Selby is entirely famous.

Two months later, David appears on the cover of 16 for the first time, riding a tandem bicycle with Bobby Sherman and [probably a Cowsill], along with an enormous green bear that’s carrying Denise Nickerson and a parasol.

And that wasn’t David Selby’s only weird transportation experience in this period, thanks to 16 Magazine. The teen mags were always encouraging fans to stalk their favorite stars. “MEET YOUR FAV” screams the headline on the April 69 cover. “GET A LOCK OF HIS HAIR, HUG HIM – KISS HIM. GROOVIEST CONTEST EVER!” This kind of thing made David’s daily commute a little more difficult.

“People were always jumping into cabs with me. I’d be forced to take a cab. I didn’t live too far from the studio at that time, but the fans were so voracious or whatever, exuberant, and just loved to walk with you. I can remember hopping into a cab, and having three or four trying to jump into the cab with me — or walking home, it was like the Pied Piper.

“I actually had a couple — a few, actually — that camped out in the lobby of my little building. I just lived in a brownstone,  so there wasn’t any great lobby or anything like that, but they asked me if I would adopt them. And so we had to call the family court.” 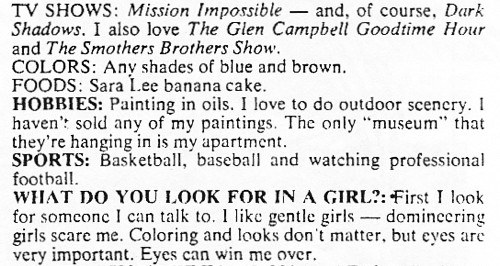 “I used to get tons of stuffed animals. I loved that, and I would take them up — at the time, there was a housing complex at Lincoln Center, and you could take things up there. I donated all of that. I was constantly taking loads of things up there. It was all delightful.”

So that’s the delightful world that David Selby has found himself in — or, rather, that Quentin Collins found himself in, and as such, David Selby, who was playing the role. Homeless kids, tandem bicycles, and Sara Lee banana cake for everyone. Who even has time for gypsy curses?

Magda tells Quentin, “You thought your haunt — you were being haunted by the curse!”

Today’s episode has the first mention of Count Petofi, originally meant as a throwaway reference — but writer Violet Welles was struck by the name, and later insisted that they bring him on as a character.

In the teaser, Magda says: “Once, many years ago, a very old gypsy woman agreed to help Count Petofi rid himself of an enemy. She did it for him, but then he betrayed her, he did not pay her. To get her revenge, she placed a curse on him. I was there. I saw what happened to that man.” Sandor asks what happened, and Magda answers, “I would tell you, but it is better to see it — and you will see it, when it happens to Quentin — tonight.”

There was actually a 19th century Hungarian poet named Sándor Petőfi; he’s considered to be Hungary’s national poet. I don’t know if he was the inspiration for the name or anything, but there you are. 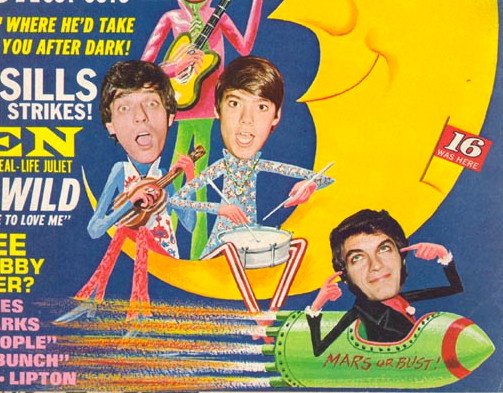