“This is my house, and I decide what is legal from now on.”

It all started with the wedding of Peleus and Thetis. Peleus was a hero in Greek mythology, but not one of the good ones; he’s mostly known for killing his half-brother and his stepmom in hunting accidents. Thetis was a shape-changing sea nymph, and Peleus got her to marry him after he snuck up on her and tied her up while she was sleeping. They were a terrible couple and shouldn’t be marrying anybody, really, but you know the ancient Greeks, anything for a party.

Anyway, they had the wedding on Mount Pelion, which is amazing, because usually it’s booked, like, two years in advance, and all of the deities were invited, except for Eris, the goddess of Chaos and Discord.

Irritated by the snub, Eris showed up anyway, probably in a Lady Gaga meat dress, and she tossed a golden apple into the middle of the room, inscribed with the word “Kallisti”, which means “to the fairest”. Pretty soon, the goddesses Hera, Athena and Aphrodite were all squabbling over who the apple belonged to.

Now, think about that for a moment. Aphrodite was so beautiful that she was literally The Goddess of Beauty, and Hera and Athena still thought they had a shot. That right there tells you pretty much everything you need to know about Greek weddings.

The three goddesses asked Zeus to decide between them, but Zeus mumbled something about a very important phone call that he suddenly needed to make, and he pointed them at Paris, the prince of Troy.

The girls all tried to get on Paris’ good side. Hera offered political power, Athena promised skill in battle, and Aphrodite said she could give him the love of the most beautiful woman on Earth. Paris awarded the golden apple to Aphrodite and ran off with the beautiful woman, who happened to be Helen, the queen of Sparta. This started the Trojan War, and a ten-year siege that ended with the destruction of both the Achaeans and the Trojans.

So who triumphs in this tale? Only Eris, the goddess of Chaos and Discord, who orchestrated the destruction of empires, just to hear the funny sound it made as it all shattered to the ground. Then Eris invented television, and you know the rest.

That brings us to the Collinses of 1897, another mighty family that has elevated the art of squabbling to a new level. Edith Collins died last week, leaving her four grandchildren scrambling around, trying to find her missing will.

The will passed from one hand to another, as screwball comedy props tend to do, but it’s finally come to rest in the possession of sister Judith, loveless spinster and the new queen of Sparta.

Judith was the boring middle child in the family, and she’s been pushed around her whole life by her officious older brother, Edward. He’s been the presumptive future king of this castle since he was born — the Collins destined to carry on the family name, and administer the family fortune. Judith was the also-ran, who didn’t even have the gumption to find some other rich family to marry into.

It’s taken a toll on her, this lonely life. She’s supposed to be in her early thirties, but just look at her. You’d think she was fifty-nine, and spent the last three years working in daytime television.

She’s read the will, and appears to be pleased with the contents, so she gathers her siblings together in the drawing room and lets them stew for a while. This is the 1897 Collins family’s idea of a good time.

So what the Dark Shadows audience gets, for the low admission fee of watching a couple commercials for All Temperature Cheer, is an afternoon matinee of Who’s Afraid of a Cat on a Hot Tin Roof. There are no vampires on the show today, no witches, ghosts, or werewolves, no tarot-card readings or terrible premonitions, not even an unexpected chill.

What we get instead is twelve minutes of Judith, Edward, Quentin and Carl, sniping at each other like George and Martha playing “Get the Guests”. Here’s a sample:

Quentin:  Judith, have you already read Carl the part concerning him?

Judith:  I’ve read nothing to anybody.

Quentin:  Well, then, what’s the matter with him? He looks like the aftermath of one of his practical jokes. What is it, Carl? Tell Quentin…

Carl:  Why don’t you just be quiet — just this one time, keep your mouth shut!

Quentin:  Oh-ho-ho! What are we so touchy about?

Edward:  Judith, I refuse to wait until Evan Hanley is brought here! There is nothing illegal about reading the will now!

Judith:  No, I suppose there isn’t. I just wanted to spare you the shock a bit longer. (She rises from her chair.) Why don’t you all sit down, and let me do the honors?

Stunned into silence, the boys all take a seat, and Judith closes the drawing room doors. “Brace yourselves, brothers,” she smiles, and begins to read. It’s not quite “Fasten your seatbelts, it’s going to be a bumpy night,” but it’s the same general idea.

She gets everything, of course — the house, the money, and all the trimmings. Quentin gets a guaranteed place to live for the rest of his life, and Edward and Carl can basically pound sand.

Once the will is read, each character follows their chosen path. Judith is mocking and vindictive in her triumph, lording it over her former tormentors. Edward postures and blows smoke through his mustache, but he’s basically a broken reed, all his bluster exposed as a smokescreen for his fundamental impotence. Carl just curls up and sobs.

And then there’s Quentin. 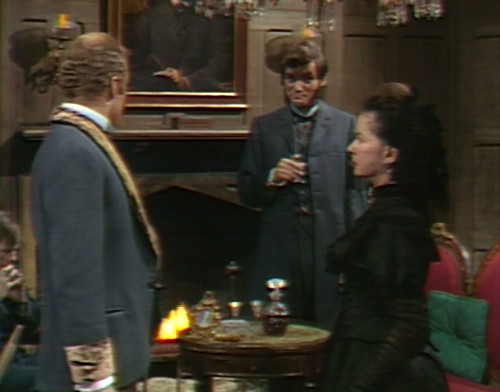 Edward:  You think this is the way this is going to end? Well, you’re wrong, sister, because I’m going to fight you, and I’m going to —

Judith:  You’ll lose, and you’ll go on losing! I am mistress of this house now. It belongs to me. I inherited the Collins fortune. She left you nothing! You’re all dependent on me.

Quentin:  Edward, I think she’s trying to tell us something.

Edward:  Can’t you ever be serious about anything? 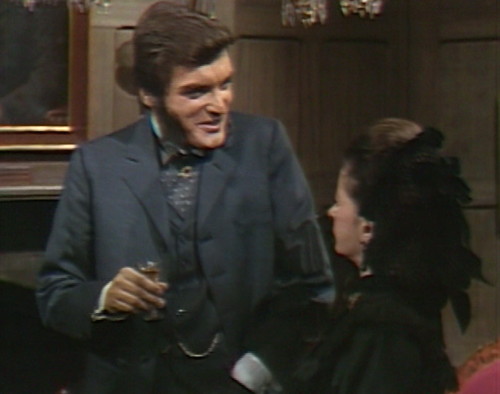 Quentin saunters over to his sister’s side.

Quentin:  Judith, I must congratulate you. I haven’t seen him get this worked up in a long time.

Edward:  If you’re going to do nothing but make snide remarks, then get out! Get out of this house at once!

Quentin:  You have a very short memory. Judith, would you mind re-reading the paragraph concerning me?

Edward:  I’d rather not hear it again, if you don’t mind.

Quentin:  Oh, but I want you to be clear on it. Financially, grandmother may have given me the back of her hand, but at least she provided me with a permanent home.

Judith:  He’s right, Edward. The will states that Quentin can live here as long as he wishes. Not even I have the power to put him out.

Quentin:  Oh, I’m sure that saddens you, Judith.

Judith:  I inherited the money and the estate, Quentin. I’ll find some way of tolerating you.

Quentin is grinning the whole time, and it’s not a pose or a plan. He is legitimately amused by this situation. The game is over, and he’s lost, and he’s just as delighted as he would have been if he’d won.

After all, even if he doesn’t have the money, he also doesn’t have the responsibility. “Now that I’m firmly in residence here,” he smiles, “I shall devote myself to a life of pleasure, with the available ladies in the house.”

And he really doesn’t mind, because Quentin is a god of Chaos and Discord, and all he wants is the opportunity to hear his siblings scream at each other for the rest of his misspent life.

This is a guy who was willing to kill for the secret, who throttled several people over the last couple weeks, and summoned a vengeance demon from the fireplace to take his nephew’s soul if she could help him get hold of the will. Now his schemes have fallen to pieces, and he’s as relaxed and cheerful as ever. 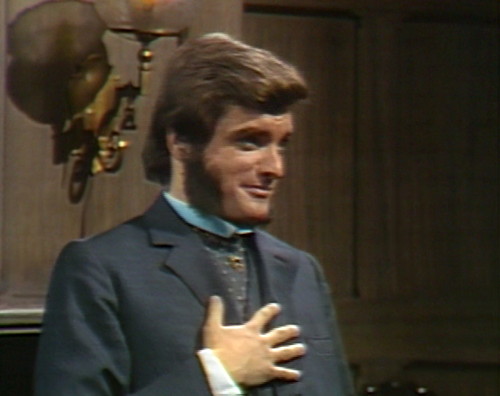 And for once, this isn’t accidental depth, where the narrative demands of a daily soap opera conspire to turn a hero into a heel. This is actual depth. Quentin is just a really good character.

Yesterday, if you’d asked how Quentin would respond to the will turning up intact, anybody who’s been watching the show would say that he’d be absolutely furious, going on a world-record throttling spree. But here he is, having exactly the opposite reaction, and it still feels authentic.

Quentin is constantly surprising, and on this blog, as you know, “surprising” is the best thing that anyone could ever be. That’s the whole point of television; it’s a surprise delivery service.

“Surprising” is up there on the list of superlatives with “sexy”, “funny” and “inspiration for a hit record,” and pretty soon, Quentin will have all four. This is the soap opera character equivalent of an EGOT.

And so we say: Hail Eris! All hail Discordia! We probably didn’t even need any Trojans in the first place. Fnord.

Tomorrow: The Secret of the Mysterious Clue.

When Quentin approaches Edward with his indecent proposal, a boom mic whizzes by overhead.

Speaking of All Temperature Cheer, while I was writing this entry, I found the following 1969 advertisement, which features Robert Rodan (Adam, from TV’s Dark Shadows) as a laundry-obsessed space alien.

Tomorrow: The Secret of the Mysterious Clue. 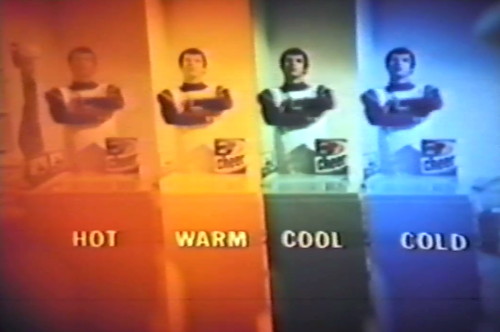