“Perhaps I have an innate fondness for gypsies who’ve fallen by hard times.”

Frankly, it’s dawn; it was dawn four scenes ago. But Barnabas saunters downstairs to the basement, where Magda is tapping her foot and shooting meaningful glances at her wristwatch. Then he takes the time to give her a full briefing before he gets into his coffin, because apparently today is casual day in the crypt. 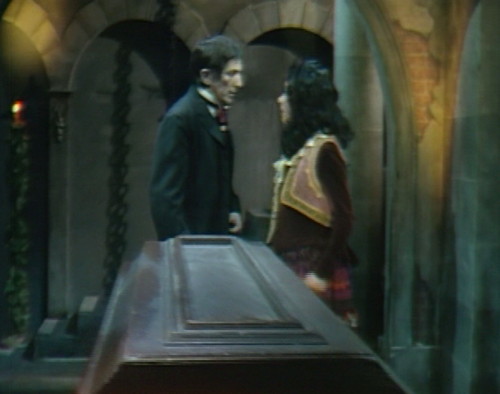 Now, technically, these two characters are not confidantes. They just met two weeks ago, after Barnabas punched a hole in her husband’s neck, sapping Sandor’s will and making Magda his enemy for life.

Then he moved into the Old House with them, and forced them to redecorate and run errands. She hasn’t driven a stake through his heart yet because he’s threatened to kill Sandor if she tries, plus every once in a while he gives her some jewelry to keep her quiet. Barnabas and Magda do not like each other.

But serialized narrative exerts strange, localized gravitational pulls that can bend relationships into a different shape. On a television show, there are more important things than consistency, like plot points and makeup and facial expressions.

Besides, Barnabas has a lot on his mind today. There are seven major plot threads running concurrently, and he’s directly involved in four of them. This is what that sounds like.

Magda:  It is very late! Where were you?

Barnabas:  Magda, I need your help more than ever. I’ll pay you well.

Barnabas:  Yes. From an old and formidable enemy.

Now, back in 1969, where Barnabas lived up until a couple weeks ago, Magda is called Julia, and she and Barnabas are the best of friends. Barnabas and Julia share all of their problems and secrets, which gives their scenes a noticeably elevated plot-point-per-minute ratio. They don’t have to explain things to each other that the audience already knows, so they can jump straight into making screwball deductions without a lot of introductory palaver.

Here in 1897, Magda is technically a different character, so they don’t have that kind of easy familiarity. But it’s better for the show if these two can keep the Barnabas-Julia chemistry intact, and that’s the goal of this scene. 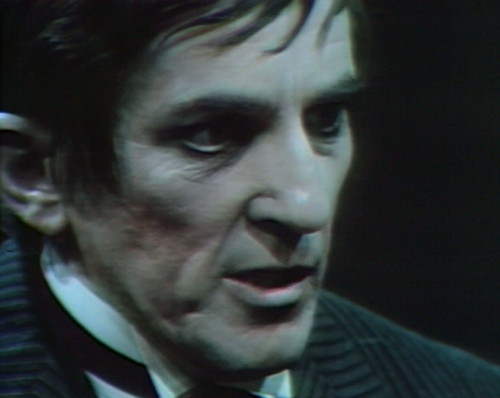 They start by introducing a new plot point that drives one of Barnabas’ storylines forward another step. This is accomplished in the most adorable way.

Barnabas:  Do you have, uh — an amulet, or some other device that could protect me against a witch?

Barnabas:  Give it to me!

Magda:  If there is a witch here, I will need it for myself!

#1. “Some other device”! This is super-cute Fridspeak.

#2. Barnabas is treating Magda like a supernatural version of Q, just bristling with helpful gadgets like a holy water dispenser concealed in a pair of cufflinks. 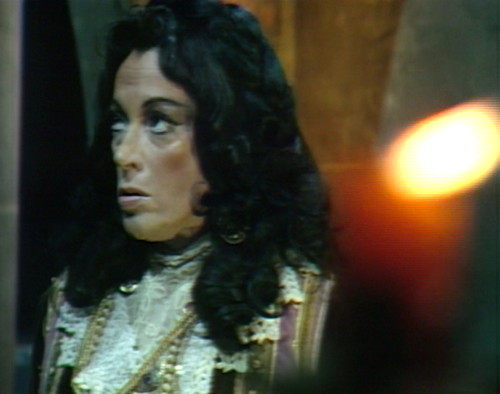 Also, #3. “I will need it for myself,” which is a funny little ethnic-people-are-children moment, where she sticks out her lower lip and pouts, because she doesn’t understand what the grown-ups are talking about.

It’s in the same area as Sancho Panza from Man of La Mancha and Manuel from Fawlty Towers, where everybody pretends not to notice the casual racial stereotyping because it’s funny, and what are you going to do, not watch Fawlty Towers? 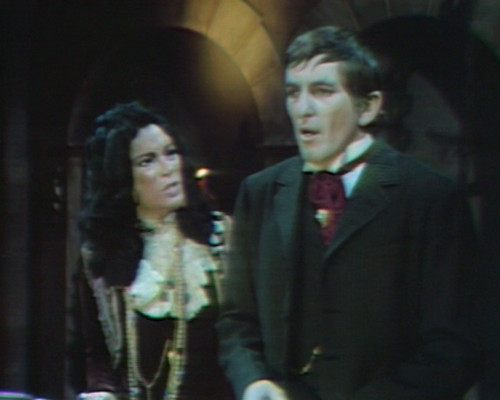 But Barnabas has no time for comic relief.

Barnabas:  No, you won’t! You are not in danger — but the governess at Collinwood is.

Magda:  I don’t understand! It is your enemy.

Barnabas:  I don’t have time to explain to you now.

Yeah, no kidding. He’s talking about his arch-nemesis, sorcerous soap vixen Angelique, who’s annoyed that Barnabas has decided that Rachel is the latest incarnation of Josette. But explaining all that backstory to Magda would take four hours and an episode guide, and the point of the scene is to move these two past the need for lengthy recaps.

Barnabas:  Just get me the amulet by sundown tonight. Is that clear?

Magda:  All right. If you promise that if I need it, you’ll give it back to me. 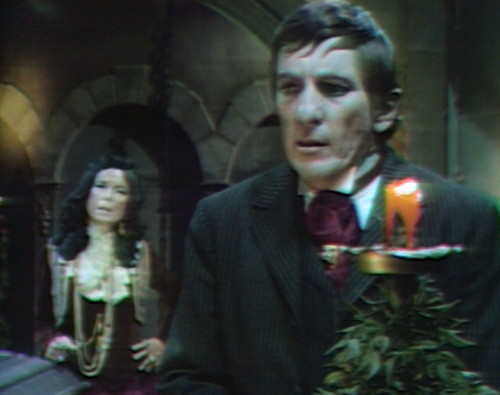 But that’s not the only item on the agenda, not by a long shot.

Barnabas:  Now, there are two more things I want you to do. First — you must stay with me, and guard me during the day.

Barnabas:  So that no one will get near my coffin!

Magda:  You mean the witch.

Magda furrows her brow, trying to figure out what the hell is up with the guy subletting her basement.

Barnabas:  Yes. I don’t know why she’s here, or how she got here.

Magda:  Didn’t you ask her?

Barnabas:  I haven’t seen her yet.

Magda:  Well, then how do you know she’s here?

Barnabas looks down at his feet, because what can you even say? This is how his life works. He is the ultimate crazy gringo. 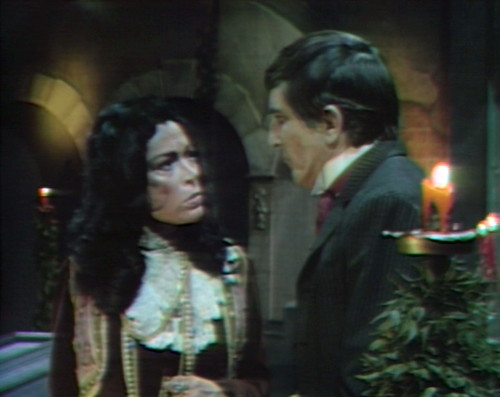 Magda spends this entire scene asking one impossible question after another, with an expression that says: Are all vampires like this, or did I just get lucky?

Barnabas:  She has very effectively made her presence known to me.

Magda:  Who is she? And why is she after you?

Barnabas:  Her name is Angelique. And she has one obsession — to destroy me.

This is one of those accidental-depth scenes that come up in long-running serialized narrative, where there are important plot points that need to get established immediately, even if it requires tweaking the characterization in a way that happens to give the character an interesting new dimension.

Over the last couple weeks, we’ve seen Magda motivated by a mix of greed, pride and occasional fear of bodily harm. But none of those are really in operation here. Instead, she’s given a bottomless curiosity, because her questions are driving the scene forward.

But giving Magda this insatiable curiosity means that she’s interested in Barnabas. She’s not afraid of him now, or angry about his assault on Sandor. She’s basically hanging around with him and gossiping. This gives her a new characteristic to play with, plus now these characters are friends. That’s how this works. 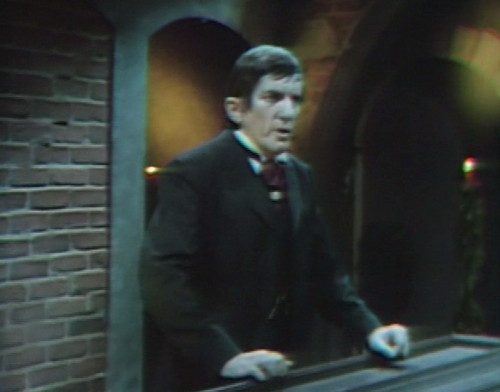 Barnabas moves to the other side of the coffin and places his hands on the lid, to signal that the meeting is moving on to new business.

Magda:  Why Judith? Judith hates us.

Barnabas:  I think she’ll show more interest when you’ve told her why you’re there.

Magda:  And why will I be there? 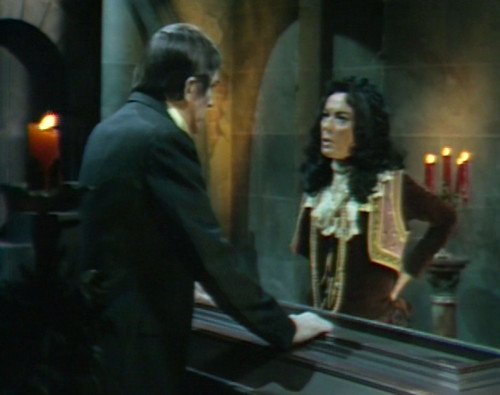 Also, look at the blocking for this shot. Barnabas is giving a press conference now, using his own casket as a podium.

Barnabas:  To tell her that you’ve seen a sign in your cards. A sign that may solve the mystery of the missing will!

Magda:  The will! Do you know where it is?

Barnabas:  Don’t look so innocent, Magda. You know very well that Sandor had the will, and was forging a copy of it for Quentin when I found it, and took it from him.

That’s another key moment in their relationship. Barnabas is basically saying, I am not one of your marks. Don’t try to play me; we share the same secrets. This is a hard stop on that kind of nonsense. 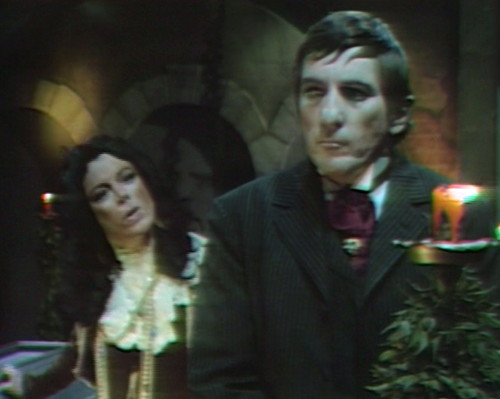 Magda:  And where did you put it?

Barnabas:  I hid it somewhere in Collinwood. Now, you’re to tell Judith where it is, but she’s not to know that I had anything to do with it. She is to believe that you found the will through the magic of your cards.

Magda:  Why are you willing to make me look so good?

Barnabas:  Perhaps I have an innate fondness for gypsies who’ve fallen by hard times.

Magda:  I don’t believe that is the reason.

Obviously, it’s a bit late for that particular instruction, but whatever. 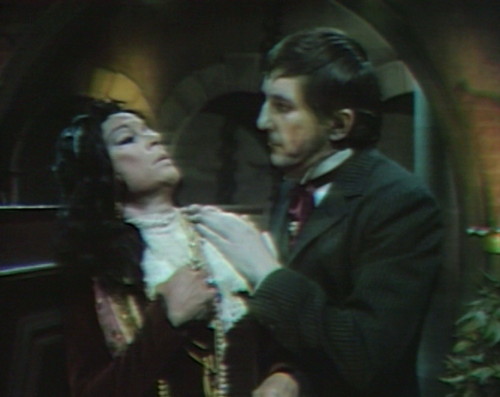 Then Barnabas grabs her, and does a little “don’t entertain any thoughts of betraying me” moment, just to demonstrate how awkward and irrelevant the concept of Be my friend or I’ll kill you will be from now on. These are no longer necessary. 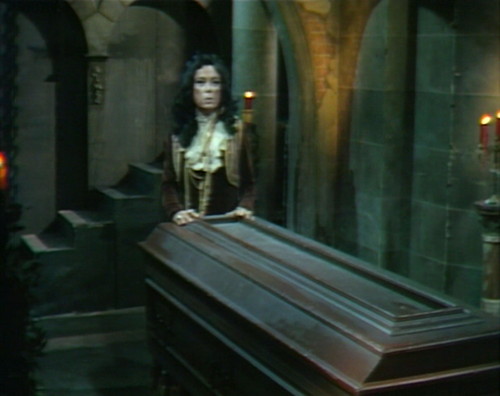 And then Barnabas gets into the coffin, and turns back into a dead person.

Now, that’s not the end of the episode or anything — there’s more stuff about the will, and the tower, and the amulet, and all the other random story threads spiraling through the show at the moment. But this scene is the important part. Meeting adjourned.

Barnabas tells Magda that she needs to stay with him during the day, “so that no one will get my const — uh, coffin.” 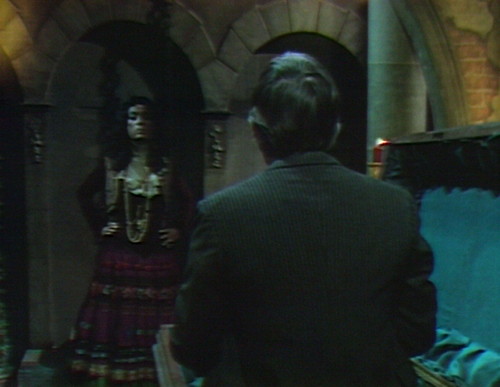