“Tell me what you meant by what you said to me.”

Hey, guess who’s out on parole? It’s Angelique, freshly sprung from the flames of the netherworld, conducting an impromptu lecture tour in other people’s houses.

Barnabas and the gypsies are out at the moment, doing god knows what, so Angelique just lets herself in via Chromakey so she can stand there in the drawing room and express herself.

“It’s been a long time, Barnabas,” she says to Barnabas, who isn’t there. “Long enough to have put me out of your mind. Oh, but you’re still in my thoughts.”

“And so are you,” she spits, turning to address the portrait of Josette, which is hanging placidly over the fireplace, minding its own business. “You, with your innocent eyes, that were always so startled when they looked on evil. Well, here it is again! Look at me again!”

Holding herself erect, she declares, “I am Angelique — and I HATE you!”

So it’s a good thing Barnabas isn’t around, because honestly, imagine coming home and finding this in your front parlor. Seriously, you came all the way over to my house to yell at the decor? 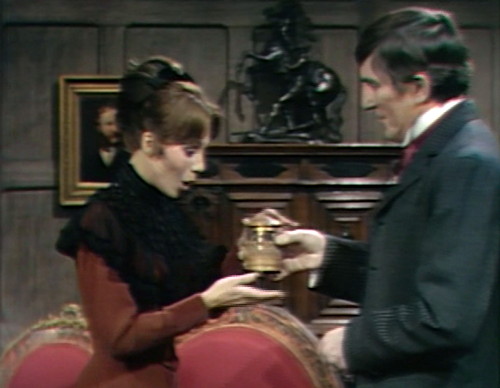 But it’s a frustrating situation for Angelique, I get that. You go to all the trouble to claw your way out through the hellfire and back onto the surface of the earth, and you find that everybody is doing exactly the same things they were doing when you left. Angelique was out of town for an entire century, and the night she gets back, wouldn’t you know it, another Josette is getting the music box routine.

No matter what time period he’s in, Barnabas always seems to be able to put his hands on Josette’s music box any time he wants it. Have you noticed that? There must be an area in the Old House that respawns the music box every time you walk in the room, like ammunition crates in Ratchet and Clank. 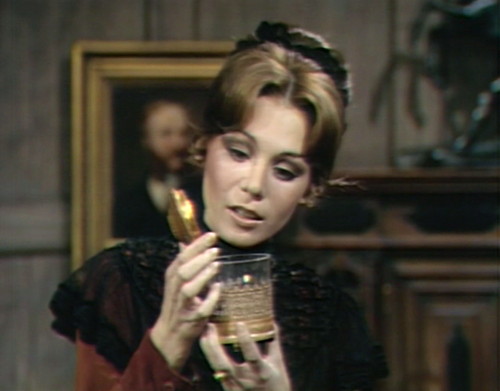 She’s charmed by it, obviously. They always are. Music boxes are like catnip for Josettes; they go wild for it. You set ’em up with a music box, and they’re good for the day.

This one’s called Rachel, by the way. She’s a governess, which is apparently one of those professions that Josettes are particularly suited for. I think she’s an orphan too, which is also big in the Josette community. You can walk into any orphanage and it’s wall to wall Josettes, all posing for portraits and tumbling over precipices.

Rachel opens the lid of the music box, and takes it for a spin. “I loved her very deeply,” Barnabas announces, perplexingly. “Does that surprise you?”

“But, Josette Collins,” Rachel says, “she lived a long time ago, didn’t she?”

He says, “Yes, she did. And in the brief time she was here, she was loved deeply and dearly… by my ancestor. I’ve always felt a kind of commitment to her. I hope you understand that.”

Notice how he keeps checking in with her every few sentences, because this is the kind of courtship where you’re going to want to make sure that it lands. Those questions are basically the equivalent of a gift receipt — if she doesn’t happen to grok his weird obsession with a girl in an oil painting, then he can take the music box back and wait for the next Josette to come along.

So you can see how this is tough on Angelique. She just came back to town five minutes ago. Her first scene yesterday was exciting, as she bounced off Quentin and Evan in surprising ways. But then the next thing she did was go and do her Chromakey stand-up routine in the Old House drawing room, and then popped over to Collinwood just in time for the latest music box handoff.

Now she’s making dolls with pretty little necks, and honestly, the whole point of having Angelique in 1897 is to see her with 1897 people. This is another example of a self-referential Dark Shadows narrative collision where they’re actually borrowing plot points from themselves, grabbing a chunk of last year’s story and folding it back into the show. But we don’t need an actual rerun. Go find Quentin; make yourself useful.

Because the question that we have to ask ourselves is: Do we, in fact, need another Josette?

We’ve already seen three Josettes on the show — Josette, Maggie and Vicki — and now Rachel is #4. We’re supposed to find this romantic and touching, but really it just makes Barnabas even more of a creepy predator than he already is. He’s basically stumbling into an elementary school, finding the skinny teacher with brown hair, and handing out music boxes with his phone number on the bottom.

This is frustrating for me, because I don’t actually think Josette is anything special. Obviously, she’s a vital part of Barnabas’ backstory, an age-old grievance that gives him that melancholy expression that the chicks seem to respond to. But when we met Josette in 1795, she didn’t really have a lot of characteristics to rub together. She was sweet, and pliable, but we never really found out what she liked about Barnabas.

And now it’s hard to say what Barnabas likes about Rachel. If we’re expected to care about the latest doomed romance, then we’re going to need more than a couple pleasant encounters and a resemblance to a portrait. Maybe she’s got a great sense of humor, or she can dance, or they’ve read all the same books. Give her a drum set, and see what happens. Anything, really.

This is especially true on this little trip through time, because the 1897 storyline is the moment that they start treating the Dark Shadows cast like a repertory company.

In 1795, Vicki went around saying, you look like Maggie, and Joe, and Burke, and Mrs. Johnson. Part of the premise of that time trip was that the lookalikes might have been Vicki’s muddled perspective. The resemblances could just be the way that Vicki saw them, a metaphor for her disorientation.

But 1897 is what it is. They’re using the theatrical convention that an actor can play multiple parts in a play, and you’re not expected to think that they’re the same character in different costumes. The characters are playing off the correspondences a bit — Liz and Roger are stlll part of the Collins family, Julia and Stokes are a wacky comedy team, and Evan’s resemblance to Nicholas Blair means that he can jump straight into a black mass ceremony with no questions asked.

But Barnabas doesn’t “notice” that these people look like Liz and Roger and whoever. He doesn’t meet Carl and exclaim, why,  Willie Loomis, what are you doing here? He just accepts them as separate characters.

Except for the Josette lookalike, obviously, who’s Josette, and either you find that thrilling and romantic in a Last of the Mohicans “stay alive, no matter what occurs” kind of way, or you don’t. Personally, I don’t get that excited about it, because Barnabas and Josette weren’t really that red hot to begin with, compared to other scene partners.

Being Josette has never made a character more interesting, up to and including Josette. They just become kind of vague and distracted. It is not an improvement.

But, what the hell. If this is how Barnabas wants to spend his spare time, then I can’t stop him. I wonder what she’s going to say when she finds out that this is just his astral body, and he’s actually sitting in his basement seventy-two years from now, thinking about a door.

Barnabas tells Rachel, “You just kept murmuring ‘Widow’s Hill’ time and again, until you — but you couldn’t say any more.”

Edward introduces Barnabas to Dirk Wilkins, saying, “If you need any help of any kind, Wilson — Wilkins is the man to see.”

Dirk completely dries up while he’s talking to Edward.

Dirk:  I asked her name, but she wouldn’t tell me.

Edward:  Did you find out what she was doing there?

Dirk:  Yes, sir, I did. She said she was here to meet your brother.

Just after that, Edward blows a line too: “He’s lucky enough to remain on the property himself, and now I suppose he wants her to — be put up with these people who — he attracted to.”

20 thoughts on “Episode 712: The Neverending Story”