“There’s not much point in being both rude and mysterious.”

Over the last couple of weeks, Christopher Jennings has murdered at least two human beings — I know they were only day players, but even day players are God’s children, presumably — and yet we like Chris, and we let him get away with being really quite skilled at covering up for his ongoing murder spree, because he’s sexy and polite and interesting, and what does that say about us? Probably something terrible.

And yet here we are, the Dark Shadows audience, accessories before, during and after the fact. We know the guy’s a monster — literally, an actual monster — but look how adorable he is with Carolyn.

This relationship came together ridiculously quickly — this is only their second episode together, and two weeks ago, she was admitting to Vicki that she was starting to have feelings for Adam. By all the rules of serialized narrative, we should resent this forced pairing. We should be using phrases like “forced down our throats.” And yet.

At the beginning of the episode, they’re coming home from a date; observe the technique.

Carolyn:  I wish you would.

He takes her hands, and looks into her eyes.

Carolyn:  The house seems so gloomy tonight… or maybe it’s just me.

So he takes her inside, and helps her off with her coat. Carolyn is amazingly skilled at this. I’ve used the “gloomy house” line myself; it’s sure-fire.

Part of the appeal is that the writers have been playing a trick on us. Chris is a loner with a big secret, and he basically spends every single scene he’s in trying to leave the room. It doesn’t matter whether he’s talking to his date, his sister or the hotel clerk — he wants nothing more than to get away.

So every scene with Chris is structured around somebody begging him to stay in the room, and on the show — and he’s cute, and friendly, and he’s got the most interesting current plot point, so we want them to win. By now, the audience has been trained to desire nothing more than for Chris Jennings to stick around long enough to finish a conversation.

Carolyn:  That poor girl at the Blue Whale. I didn’t really even pay much attention to her when she was serving us drinks yesterday. What a terrible way to die.

Chris:  Carolyn, I — I really should be getting back to town.

She reaches out for his hand.

Carolyn:  Just stay, until someone comes. I really don’t want to be alone.

So he stays. You have to hand it to Carolyn Stoddard; she’s got a system.

Unfortunately, she follows up with more talk about the girl at the Blue Whale who was killed by a werewolf, which is not exactly a panty-melter. Chris gets nervous and looks out the window, and she calls him on it.

Carolyn:  Chris, you’re not listening to me.

Chris:  Well, I think I’m just, uh, just more upset about the girl than even you are.

Carolyn:  Did you know her?

She stares at him.

And then he smiles, and he looks in her eyes, and — wow. That’s actually fairly spectacular. If he can keep that up for a minute, we might get somewhere.

Carolyn tries to move things another step, but he’s doubling down on the hard-to-get.

Carolyn:  Are you challenging me?

Carolyn:  Well, there’s not much point in being both rude and mysterious. They amount to the same thing. Chris, you just don’t want anyone to know you. Why?

So that’s kind of a bombshell, the thing about rude and mysterious being the same thing. That calls the entire premise of the show into question. If being mysterious is rude, then Dark Shadows has a lot to answer for. 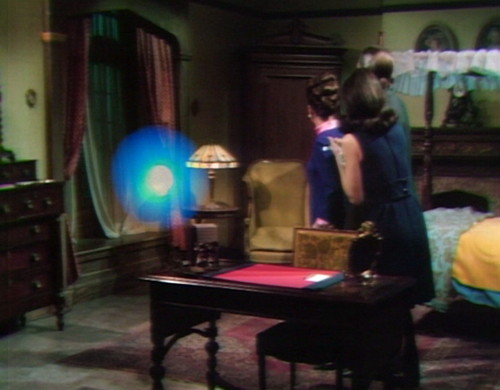 Girl governess Victoria Winters is upset this week, because her new husband Jeff fell backwards into the past, and turned into a wristwatch. Liz is trying to support Vicki, and they’ve called in local occult expert Professor Stokes, because that’s what you do in this house when you have a problem. If there was a fire at Collinwood, they wouldn’t have the first idea what to do about it, but they’ve got a witch doctor on speed dial.

Jeff hasn’t shown up in person yet, but he’s currently appearing as an “astral manifestation,” which is one of the shoddiest pieces of spectral showmanship I’ve seen in a long time. If that’s the best that Mr. J. Clark can scrape together after 170 years of preparation, then I’m sorry but I think Vicki can do better. I hate to be rude and therefore mysterious about it, but that’s just how I feel.

Happily, Professor Stokes is on the case, and he dispenses his usual prescription — they should have a seance, to contact Jeff and find out what this is all about.

Stokes is a very useful character to have around, because now they have someone who can arrange some kind of necrobabble hoodoo at a moment’s notice. He does this every single time that he appears. It’s marvelous.

So let us speak, for a moment, of the Fox sisters.

In 1848, the Fox family of Hydesville, New York moved into a new house, which was reputed to be haunted. The two younger sisters — Kate, age 12, and Margaret, age 15 — were clever and strange, and they played a trick on their parents and older sister, pretending that they could communicate with the spirits in the house.

The big moment was when Kate snapped her fingers, and instructed the spirit to snap along with her — and the spirit did. Then they asked the spirit to rap out the girls’ ages, and it could do that too. This became something of a sensation in Hydesville, where I guess they didn’t have a lot of entertainment options.

They worked out a code to translate the spirit raps into letters of the alphabet, and soon they were open for business, answering questions and making predictions, and that’s how the Spiritualist movement began.

It was a trick, of course, and in 1888, Margaret confessed that the sisters had created the raps by cracking the joints in their toes and ankles. But it was too late. By then, there was a whole industry of ghost whisperers across the country, with increasingly extravagant techniques and manifestations — D.D. Home, and Florence Cook, and Anna Eva Fay, and the rest of the wretched hive of scum and villainy known as Spiritualists and mediums. 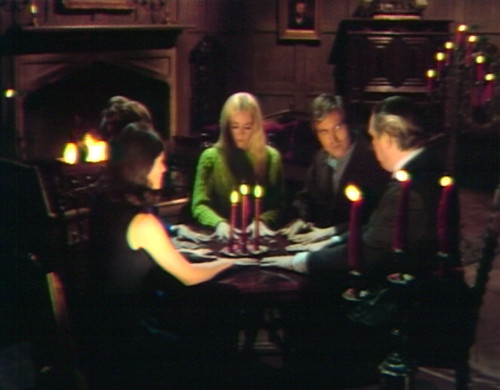 So all of the classic elements of mediumship that we see on Dark Shadows are based on techniques that the Spiritualist grifters used to scam the impressionable rubes.

For example: there’s no logical reason why a ghost would need you to turn all the lights off before sending somebody into a trance. It’s a ghost; why would it care how bright it is? The medium wants the lights off so that she can bang on the table, and pull the string that operates the floating trumpet of judgement that she has hidden in her magic cabinet of wonders, which must never be touched by unbelievers, or it will interrupt the psychic resonance of whatever.

Here, ask me another. Q: Why does everybody have to keep their hands on the table, so that their fingers are touching? A: Because it keeps everyone focused on their own hands and the surface of the table, while the medium cracks her toes and clangs the hidden cymbals attached to her shins.

Okay, one more. Q: Why is everybody told to clear their minds and focus only on the spirit that they’re trying to reach? Incredibly depressing A: Because people are so gullible that if you look them straight in the eye and say, “I am about to tell you ridiculous lies, and it would be great if you could convince yourself to ignore any suspicious thoughts you might have,” then they will just go ahead and do that.

Happily, this all translates perfectly into a television show, because the seance is already designed as a piece of theater, and it’s super low budget. All you need is candles, fingers and shouting.

You don’t even need to hire a day player to be the ghost; the characters can just posit sensations. At one point in today’s exercise, Liz gasps, and says, “Someone turned my head — a hand, as if to see me! I could feel eyes staring at me!” And then everybody acts impressed. It’s that easy.

Then Carolyn goes into a trance, and now we’re talking to a ghost. This is atmospheric, but light on practical value.

Carolyn:  Ahhhhh… I heard the widows wailing! You must… you must…

Stokes:  What must we do, what?

Carolyn:  You must — stop him!

Stokes:  Who must we stop? Who?

Carolyn:  He must not — come back!

Stokes:  Are you talking about Jeff Clark?

Carolyn:  You must — stop them! He must stay where he is!

Naturally, this is making Chris antsy; he doesn’t really want to be around if people are sharing dark secrets.

Stokes:  Can you tell us who you are?

Stokes:  Magda — what is your last name?

Stokes:  What is your curse, Magda?

And then Chris gets up and shakes her, which is always helpful when somebody’s in distress. 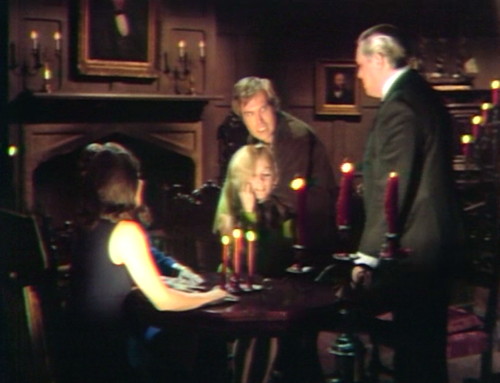 So now, everybody gets mad at Chris, because apparently his curse is that everything that he does is rude.

But it’s not really his fault. Magda managed to emit 37 words, and not a single one of them was helpful. If I were Magda, I would have gone easy on the pronouns, and concentrated on getting some of those antecedents out the door, like “the children” or “Quentin” or “the west wing”.

This is an irritating ghost habit, that the dead can say anything they feel like, as long as it doesn’t actually move the story along in any way. We saw this a year ago with the ghost of little Sarah, and it’s going to come up again.

I mean, I could understand it if ghosts have limited power, and can only appear as a glowy blue light. (Actually, I can’t, but I don’t want to fight about it right now.) But if Magda can actually say words through Carolyn’s mouth, then why does it have to be a puzzle?

In fact, ghosts are going to be pulling mysterious/rude stuff like this all week — writing on mirrors, knocking over furniture, composing chart-topping hit songs. But by the end of the week, the grown-ups will be just as befogged as before. 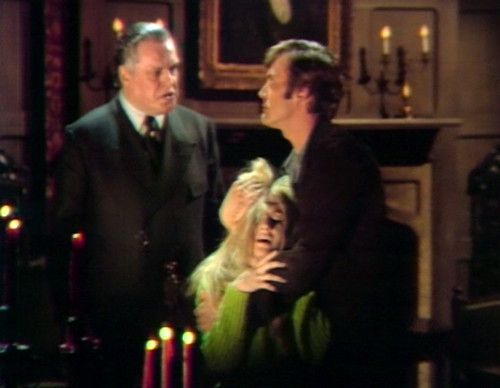 So we never do hear from Jeff, or his astral manifestation, either at this seance or anywhere else this week. Magda kind of nudges Jeff offstage, and that’s the end of him; we don’t hear from him again for another two weeks.

But that’s the problem with holding open mic night for spirits at Collinwood — the sheer number of potential entrants is fairly staggering. Just imagine the number of dead people in this house who have some kind of unfinished business. They should order a pizza; this could take all night.

In act 1, as Vicki starts to cry, a lightning flash reveals the top of the set and a boom mic hanging above them.

Vicki is supposed to react when the astral manifestation disappears, but she says “No!” a little early, before anything changes.

When Stokes is looking around the drawing room for a seance table, they cut to a camera that’s partially blocked by something — maybe another camera. It’s hard to tell what it is, because it’s just a silhouette.

Professor Stokes says, “Miss Winters, will you sit at the end of the table?” but the table is round. Also, Vicki’s last name is Clark now.