“I’m positive he’ll give you a sign — a sign for you to forget all of this insanity!”

It’s Monday, and the start of a theme week on Dark Shadows — five straight episodes of ghost stories, featuring three different ghosts. That means a whole lot of windows blowing open, and a whole lot of doors slamming shut.

People will sit around a table, and make sure that their fingers touch. A book will fall off of a piano. A grandfather clock will commit suicide, right in front of us. And there’s a better than average chance that somebody’s going to feel a chill. A CHILL!

Here’s the scenario: Girl governess Victoria Winters has married Jeff Clark, her 20th century boyfriend, who it turns out is also Peter Bradford, her 18th century boyfriend. This is bigamy, of course, but nobody else wants either of them, so she might as well help herself.

On their wedding night, Jeff disappeared before her eyes, drawn back into the past by mysterious forces, for reasons that were not immediately evident. It was kind of a dick move, to be honest, but you know what mysterious forces are like. 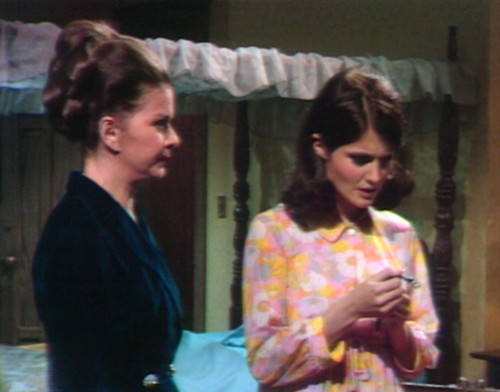 Now Vicki’s alone, with nothing to comfort her but a broken wristwatch and a catering bill.

She’s spending a lot of her free time holding the watch and wondering about it. She gave it to Jeff after the wedding, and he was wearing it when the powers grabbed him out of the now. Then she found it in her room, stopped at 11:25.

Trying her best to keep up, Liz says, “It doesn’t do any good to think about that.”

“It stopped the exact moment he disappeared,” Vicki insists. “Why didn’t I realize that before?”

And Liz just looks at her and basically says, I don’t know, you’ve had a lot on your mind. Does it matter?

But it does, apparently; we’re going to hear a lot about the watch today. You and this watch are going to be well acquainted by the time this is over.

What I’ve gathered so far is that the watch stopped when Jeff disappeared — but when it starts running again, that means that Jeff’s spirit is in the room with her. We can’t see Jeff, or interact with him in any way, but Vicki says that he’s there when the watch is running, and there’s nothing to do but take her word for it. This is what we call a non-falsifiable hypothesis.

While we’re on the subject, the whole idea of saying that “a ghost is in the room” has always perplexed me. I mean, outside of a cartoon, what could that possibly even mean?

Ghosts are supposed to be non-corporeal wisps of consciousness, untethered from physical reality and left to drift through ideaspace. They aren’t anywhere. The whole point of a ghost is that it’s not in a body anymore.

Fraudulent ghost hunter grifter types always act like a ghost is a chipmunk family that’s living in the walls, and if you stay still and keep your nightvision camera rolling, the spook will pop out through a mousehole and look around.

The ghost hunter will claim that a spirit is chained to a particular location because the dead guy has unfinished business, like who hasn’t, but then they look around and sniff the air like they can smell ectoplasm, and they say, “It’s in this room right now!” And then the smart person in the room says, of course it is, you just said it was tied to this location. Doesn’t that mean it’s always in this room?

I’m kidding, of course. A smart person would never be in the same room as a ghost hunter. That’s pretty much the textbook definition of a smart person.

Anyway, Vicki calls Professor Stokes, and he comes over to try and beat some science into her. It works out pretty much the way you’d expect.

Vicki:  Professor Stokes, I want to be with him. No, that’s not right — I have to join him!

Stokes:  Why did you send for me? I am not a wizard, Miss Winters. I don’t transport people through time.

Vicki:  Is he here, listening to us?

Stokes:  If he is here, I’m positive he’ll give you a sign — a sign for you to forget all of this insanity!

So that’s the symposium that Professor Stokes finds himself in, a panel discussion on whether loving is insane or not. 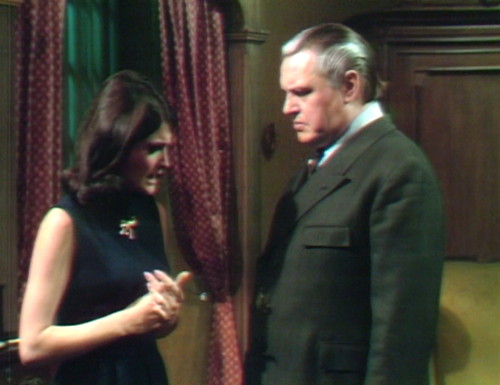 Stokes tries to dissuade Vicki, but she’s the one holding the magic wristwatch. It’s a symbol of time being suspended — so if it starts running again, then that means that Jeff is floating past, and she can hitch a ride to the 18th century.

What she doesn’t seem to grasp is that the wristwatch is broken. You can’t make history do what you want, just because you have a busted watch and an inadequate sense of temporal responsibility. 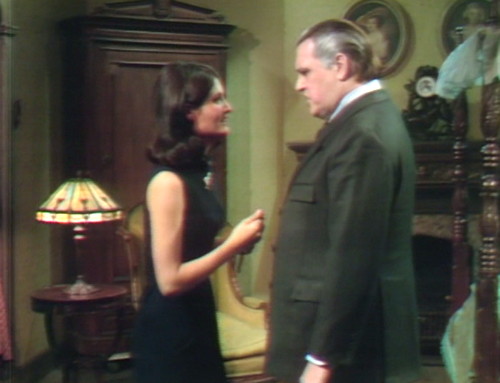 But she’s still trying to make a sales pitch to the gods of chronological order and chaos.

Stokes:  You were in jail, being tried for witchcraft. You want to go back to that?

Vicki:  But, surely, I could go back to an earlier time!

Stokes:  And know what is ahead of you? What kind of a life would the two of you have, knowing how it must end?

Vicki:  We could change it!

Stokes:  History? It’s not so accommodating.

Yeah, but try talking sense to Vicki for five seconds. It doesn’t work, because it’s Vicki, and there are some situations that you just can’t fix.

Vicki is going to break time again — and now, she’s actually doing it on purpose. The stupid choices that she makes will have a huge impact on Collins family history, like a particularly dim butterfly flapping its wings backwards, and causing a drought in New Mexico.

Okay, let me try to explain this to her.

Victoria Winters: You are not in charge of time. Put the magic wristwatch down, and step away from the calendar before you hurt somebody.

I swear, this is the last time I’m going to talk to her about this. Or maybe it’s the first time, it depends on which direction she’s going.

When Liz and Vicki enter Vicki’s room, there’s a crash from offstage.

Liz tells Vicki, “I think it would be a good idea to ask him for lunch, to have lunch with us.”

Vicki loses track of her lines during her conversation with Liz about the watch. She says, “I know because when I went to call Professor Stokes, I glanced at the clock. It was nearly that hour then.” Liz says, “It doesn’t do any good to think about that,” and then Vicki can’t remember what comes next.  She stares at the watch and whispers to herself, “It was nearly that time then,” and then she checks the teleprompter.

At the end of act 1, the door slamming shut and the door-closing sound effect are way out of synch.

When Vicki’s standing on the edge of Widow’s Hill, the lightning flashes reveal the top of the backdrop, as well as a bare patch of floor to the right, with a cable on it.

All five of this week’s episodes are directed by Penberry Jones, apparently filling in for one of the regular directors. I can’t really tell the difference, so I don’t know why I’m even bringing it up.

The cast credits play over a shot of Vicki’s bedroom, and then it cuts to a shot of the Collinwood foyer for the production credits. This only happens in two episodes; the other one is episode 657. I apologize that these Behind the Scenes notes are even more boring than usual today.