“If you want tomorrow to happen, you will see me now.”

Dark Shadows fans don’t like Betsy Durkin. This is an established fact; ask anyone.

The Dark Shadows audience is unbelievably tolerant when it comes to acting styles — we have to be, it’s a survival skill — but it seems like nobody in the world has a nice thing to say about the actress hired to replace Alexandra Moltke as girl governess Victoria Winters. She doesn’t look right, she doesn’t feel like Vicki, she’s not a good fit for the role. And it seems like the producers agreed, because Betsy only appears in ten episodes, and then they cut her loose. She’s bad at Vicki.

Except that this is not actually the case. Betsy Durkin is fine. There are some serious irritants who pop up on Dark Shadows over the years — like Harry Johnson, who’s in today’s episode, working as hard as he can to ruin his scenes. Betsy is nowhere near that level. Betsy is fine.

So let’s see if we can figure out why fans dislike her so much, as the recently reconstituted sexy vampire boy Tom Jennings climbs in through the window and tries to murder her.

Reason #1: Vicki has been useless for a long time, but we gave her a pass because nobody wanted to hurt Alexandra Moltke’s feelings.

It’s obvious why Dark Shadows fans feel sentimental about Vicki. She’s the girl from the dream, who hitched a ride on a train through Dan Curtis’ imagination, and inspired him to create the show. She’s the lost princess who worked as a scullery maid in the Queen’s castle, always a heartbeat away from a miraculous coronation. The show wouldn’t exist without her.

But let’s face it: the last time Vicki did anything even remotely cool was when she helped David get away from his evil fire-goddess mother before he cooked to a crisp, and even then, all she did was stand there and nag at him for ten minutes. That was a career highlight for her.

Reason #2: They keep saying that Vicki is important, and then they shield her from participating in plot points.

So at the top of today’s episode, Barnabas does what he always does — he rushes into the room, and protects Vicki from anything remotely resembling storyline progression. He’s been doing that every single day since he popped out of the mystery box a year and a half ago; it’s basically his only job. If it looks like something is about to happen to Victoria Winters, it’s up to Barnabas to chase it away.

And this time, he actually breaks with protocol and tells her some hard truths about the dude who just tried to eat her.

“There are very few such people in the world,” he says, “but they exist under a terrible curse — the curse of the living dead. They cannot live in the light of day — and by the dark of night, they cannot die. They feed on the blood of other human beings. And they are called… vampires.”

That’s a huge, game-changing moment, saying the V-word out loud in front of the governess. That should mark a fundamental shift in the way that the show works. Except that it doesn’t.

Barnabas:  I want you to be very careful, and I don’t want you to have anything more to do with this.

Barnabas:  Well, someday soon, I’ll be able to tell you. But I can’t now. Will you trust me to do what must be done?

Now, keep in mind — when this script was written, they thought it would be Alexandra Moltke sitting in that bed, being just as useless today as she’s been all year. This is not a Betsy Durkin-shaped problem.

Reason #3: There’s an appealing story coming up, and we’re eager to get to it.

On another set not far away, the handsome new mystery monster has walked straight up to the Devil, and started asking impertinent questions.

This is Chris Jennings, the twin brother of Tom the vampire boy, and he’s investigating his brother’s unsolved murder. He’s asking Nicholas questions that nobody ever asks, like, “What is it that you do?” and generally making an entertaining nuisance of himself.

Meanwhile, the vampire twin is actually outside the window right this minute, defying all known laws of live-to-tape television production, because Tom Jennings is a maniac who CANNOT WAIT TO EAT YOUR FACE.

This is the kind of sexy recklessness we’ve got coming to us, as soon as the tedious people clear the stage. Vicki is one of those people.

Reason #4: Before we can move on, the endless cycle of boring story must be broken.

So here comes dreary speed bump Harry Johnson, who insists on slouching across the screen while I’m trying to watch television.

“Now, you listen to me!” Nicholas bellows. “If I don’t get that body out of that grave, I’m in trouble. And if you don’t help me, you are in trouble.”

And apparently he can’t, so now I have to watch Harry unearth Eve, who was killed a week ago and has not filled out any application explaining why she should be allowed to return.

But that’s how the show works these days. Tom got staked two months ago, and now he’s back. Eve was strangled, dumped in a closet and buried in the earth, and now we’re hauling her back up to the surface again.

In fact, this is the third coffin that somebody’s dug out of the ground in the last six episodes. They’re going to have to start cutting this out. 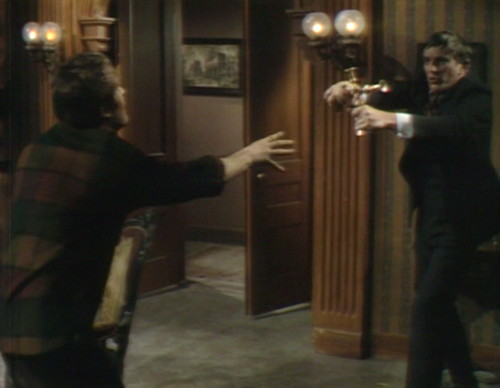 Reason #5: Everybody is acting extra crazy right now, and it’s still not working.

If Vicki is acting a little more aggressive than usual, she’s not alone. They are deep into the Great 1968 Wrap-Up by this point, and they’re trying to speed past this nonsense as fast as they can.

So everybody is acting out of character this week. Carolyn suddenly has romantic feelings for Adam. Maggie agrees to marry Nicholas, and then insists on participating in the mad science experiment in the Old House basement.

And Adam goes completely bananas by the end of the week, crossing a line that you’d never expect him to cross.

In fact, if Adam was suddenly replaced with a new actor, then that guy would’ve been the disastrous recast. Everybody would have agreed that Robert Rodan was great as Adam, but this new guy is just a bad fit for the character.

Reason #6. To heal the world, there must be a sacrifice.

This storyline isn’t going to fade away by itself. They need someone to lie down on the sacrificial altar, to die so that the show might live.

And this week, the show is absolutely obsessed with the idea that the sacrifice must be a woman. Every adult female character who appears this week is rendered unconscious at least once. Just wait until you see what happens to Maggie; she plays the lead role in a Black Mass and gets strapped to the mad science table in the same episode.

But as the week staggers to a close, Betsy Durkin will be on that table.

And this is so painful for us — the girl from the dream, our precious lost princess, crumpled up and thrown away so that we can be delivered from this endless, repetitive story. This has to happen, but it comes at a price: we leave our innocence behind.

To protect ourselves — to deal with the guilt and pain of consenting to this terrible bargain — we withdraw our love from Betsy Durkin.

We tell ourselves that she’s the thing that’s wrong with the show right now. We take all of our anger and disappointment and grief, and we load it onto her shoulders, and we drive her off into the wilderness. She is the goat.

You don’t have to like Betsy Durkin. But a little respect, please. She suffers for our sins.

Tomorrow: The Owl, the Raven and the Bat.

In act 3, just as Harry and Nicholas arrive at the cemetery, we see a stagehand’s arm as he puts a prop lantern on the ground.

Usually, when an actor plays two characters in an episode, they’ll only be credited for one, but today, Don Briscoe gets two credits — one for Tom Jennings, and one for Christopher Jennings.

Tomorrow: The Owl, the Raven and the Bat.