“Why do I remember that sometimes the trees have no leaves at all, and at other times, the leaves are green?”

So Adam the enormous Frankenteen is standing around in the drawing room, when his mate Eve opens the door and gives him a look.

This is what she does all day, apparently, just walks around the house giving people looks. Turns out that’s a job.

She goes to the window, and sighs, “I remember this kind of day so well.”

That puzzles Adam, because Eve was invented in a mad science lab only three weeks ago, and she hasn’t had the chance to accumulate a lot of meteorological experience.

She takes a moment to consider. “How do I know that if I go out, the air will be sharp and clear?” she asks. “Why do I remember that sometimes the trees have no leaves at all, and at other times, the leaves are green?”

It’s really getting to her. She shrugs, and says, “I don’t even remember how I know the word ‘fall’. Is it really the right phrase, for this time of year?”

“I’ve heard it before, yes,” Adam says, “and it confused me too. Strange they just named the season for the fact that the leaves fall from the trees. That doesn’t seem possible. They certainly would have chosen a more complicated name than that.”

That’s what they’re broadcasting this afternoon on ABC — a remedial faculty meeting at the Monster Institute of Technology.

So this is going to be one of those posts under the general heading of Nobody Understands Dark Shadows But Me, because apparently there are still people living on the Earth who are under the impression that Eve should have some kind of comprehensible character arc.

I mean, if we expect Eve to follow any logic at all, then this scene is a piping hot mess. Just to remind you, she’s a dead body who was brought to life using the spirit of a French Revolution psychopath named Danielle Roget — and as of last week, she remembered her past life just fine. She even recognized the spirit of her old boyfriend, Philippe, just by listening to the chandelier tinkle. Now she’s struggling with seasons.

Which is interesting, because she met Professor Stokes on the night that she was brought to life. He is one of the five people that she’s spoken to in her current incarnation, and he’s not an easy guy to forget. 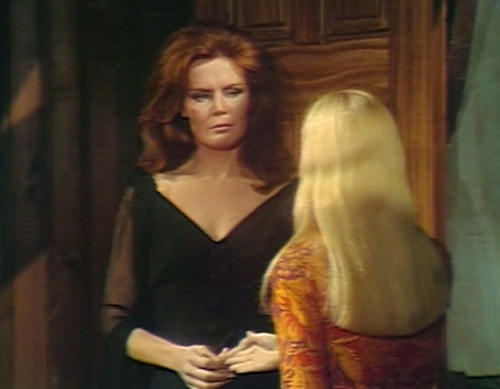 So the thing that people get wrong about Dark Shadows, especially here at the end of 1968, is that they think it’s supposed to make “sense” — that there’s some underlying logical system that lets you predict what a character is going to do or say, based on what we know about them and what they’ve done before. This is not the case.

Eve is not a character. Do not concern yourself with the question of whether she makes sense as a character. She does not.

So when Adam brings Eve to Collinwood to meet Carolyn, and Eve rolls her eyes as she reluctantly accepts Carolyn’s handshake, it doesn’t mean anything in particular. This isn’t a storyline about two women from different worlds who eventually become allies, and then close friends, as they realize that they both care about Adam’s happiness. It’s just not that kind of enterprise.

Eve is a kaiju, like Godzilla, or Heather Locklear on Melrose Place. She’s a self-absorbed, fire-breathing weapon of mass destruction. Expecting her to be anything else is like watching the Weather Channel and complaining that Hurricane Katrina doesn’t have a compelling character arc. Yes, that’s true. That’s the medium that you’re interacting with.

Eve just struts in, and effortlessly takes over the scene. “Adam has told me how kind you’ve been to him,” she says. “Is this where you kept him?”

Carolyn stammers, “He — he stayed here, yes.” And then Eve just stands there and stares at her, as Tokyo burns.

She sneers around the room, giving the place a disapproving once-over.

“There are many books here, Eve,” Adam explains. “I used to read every night. And Carolyn would bring my food. We’d play cards.”

So she’s fantastic. She’s a loose cannon firing at will, and she brightens this place up in a way that it desperately needs.

It’s important that she does this routine in Adam’s old hiding place, because this is a ritual cleansing. Adam was cooling his heels on this shabby set for two months, and just seeing it again makes me uneasy. The demon of this dull storyline must be exorcised, and Eve is the one to do it.

There’s only one rule on television, and it’s Don’t touch that dial. Dark Shadows is a particularly good example of that rule in action, because each episode is assembled at the last minute by squabbling lunatics.

That’s especially true in fall 1968, because the ratings are still climbing, while the writers are engaged in a hostile standoff over the direction of several interlocking storylines that aren’t going anywhere in particular.

At this point in the show, all sense of logic has evaporated. Characters do and say things because those are the most interesting things that Dan and the writers can agree on. Eve is basically a special effect; she’s just here because Bil Baird is too busy to bring over the marionette bat.

So if you’re struggling to figure out an in-universe explanation for Nicholas’ plans, or what Professor Stokes is thinking, or Carolyn’s emotional journey — there isn’t a lot of enjoyment to be gained from that exercise. In late ’68, it’s just not that kind of a show. If you stress out about whether the show makes sense, then you aren’t watching Dark Shadows right.

You can do that if you like — you’re well within your rights as a citizen to misunderstand Dark Shadows, and stubbornly refuse to enjoy it. But there is so much to enjoy, just standing there in heels and demanding our attention.

Last Thursday, Adam locked Eve in the basement to hide her from Barnabas, and she had a panic attack. Then we didn’t see her for a week, and today she’s just scowling around the house like usual. We’ve seen this kind of thing a lot lately — yesterday’s episode also ended with a dramatic cliffhanger that they’ll ignore for a whole week.

Eve says, “This Professor Stokes, I’m not sure I would like him.” Adam says, “I did,” and then realizes that’s not his line. He amends it to, “No, you wouldn’t.”

After Adam says, “Eve, I want us to talk,” there’s the long sound of a squeaky door swinging open, and then closed again.

When Harry is talking to Carolyn on the terrace, they cut to the wrong camera as it swings around the fountain to pick up a shot. As it settles, you can see a studio light reflected in one of the windows.

The scene where Adam tells Eve that they’re going to Collinwood ends too soon — the camera fades to a shot of the moon while Adam is still talking.

Jeff tells David, “Well, we don’t know if we aren’t going to be here.”

There’s another squeaky door sound as Eve walks into Adam’s old room, and he tells her about the books.

14 thoughts on “Episode 609: Nobody Understands Dark Shadows But Me”