“Is that what you’ll do with me, when you don’t want me anymore? Will you have someone carry me to the woods, and kill me?”

“You are my slave,” Angelique says, staring directly into the camera. Try not to take it personally. She probably doesn’t mean you, specifically.

“You must come to me,” she adds. “Hurry!” Then she says it again, in an increasingly urgent tone. “Hurry! HURRY!” 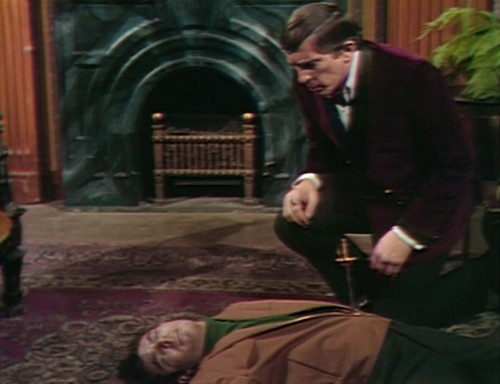 The guy she’s actually summoning is our hero, more or less — Barnabas Collins, former vampire. The tables have turned recently, and now Angelique is the vampire. Barnabas is her slave and emergency consigliere, and don’t think she doesn’t take every opportunity to remind him about it. He’s only been on the job for two days, and he’s already been bitten twice. Now she’s sending out distress signals when she needs to clean her carpets.

The current housekeeping crisis is that Joe Haskell is lying on the Oriental rug, with a letter opener piercing his midsection. Joe’s been Angelique’s blood slave for the last several months, but she’s decided to replace him with Barnabas, and Joe’s taken it kind of hard.

Joe is actually the second guy in the last couple months to attempt suicide by stabbing himself in the stomach. I didn’t realize that seppuku was so popular in 1968. You don’t really see people killing themselves like that on TV anymore, so I guess it was one of those passing fads of the late 60s, like tie-dyed T-shirts and civil rights.

Barnabas checks Joe’s neck, and finds the marks of a vampire bite. “How long, Angelique?” he says. She says, “Barnabas, get him out of here,” but he persists: “How long?”

Then there’s a melancholy little slice of drama that couldn’t really happen anywhere else. It’s a Sam Hall script today, and he’s got two of the show’s most interesting characters. This is what he does with them. 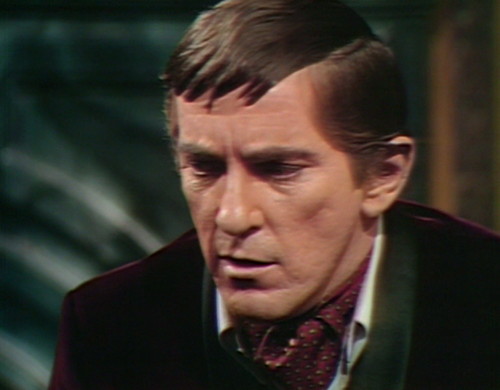 Barnabas sighs. “I should have remembered,” he says. “Anyone. A stranger passing, a friend, an enemy… it doesn’t really matter.” 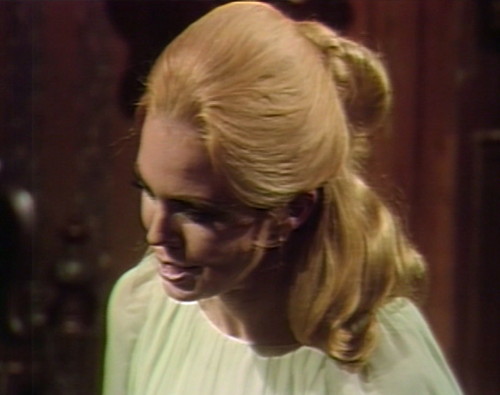 “No,” Angelique smiles, “just as long as it’s someone. And that someone obeys orders, have you forgotten that? Because you are my someone, and you will do as I say!” 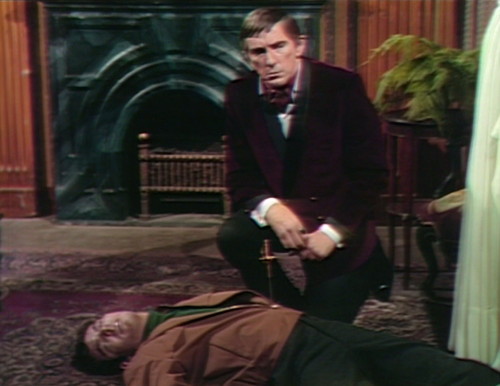 So that’s who we’re dealing with here — a person who sees this as an opportune moment for another sales pitch.

That’s the power of the Barnabas/Angelique supercouple, a gravity well that distorts every storyline into another round of their eternal kaiju battle. Angelique has only been on the show for eleven months so far, but their story is so intense and dramatic that it feels like Dark Shadows couldn’t exist without her. 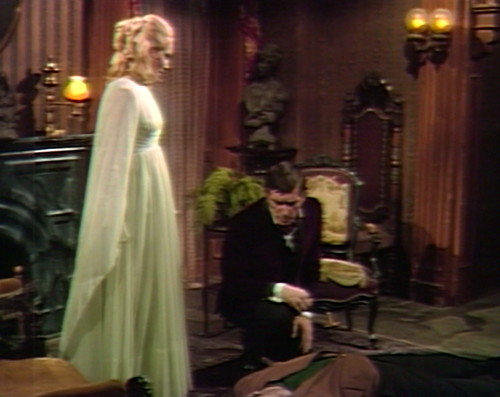 “Now take him to the woods,” she says, “and leave him there.”

She smiles. “Then you will have to kill him, won’t you? Yes, Barnabas. I want him far from this place, where none of us will be blamed… where even Nicholas will not realize what has happened here tonight.”

He looks up at her, the beautiful servant girl who turned his head on that warm, reckless night in Martinique.

“Barnabas,” she says, “now that I have you… I don’t want him anymore. He couldn’t bear it.” 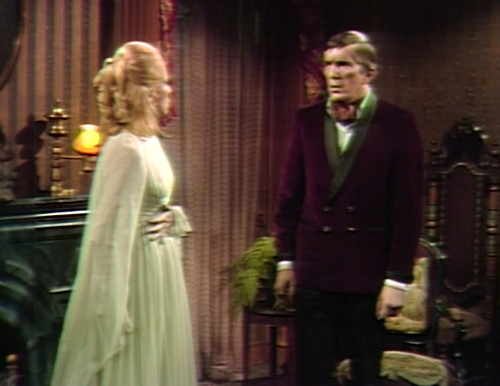 “Is that what you’ll do with me, when you don’t want me anymore?” he asks. “Will you have someone carry me to the woods, and kill me?” 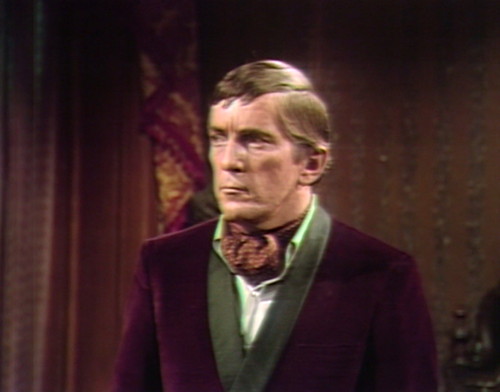 He scowls. “You would, wouldn’t you? If you had someone beside me.” 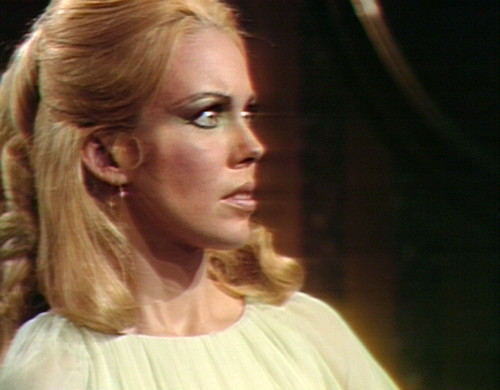 So, there. That’s what Dark Shadows can do, on a good day when the wind is right. There are probably a lot of television shows that could do a scene like this just as well, but I dare you to find one that does it better.

Tomorrow: Nobody Understands Dark Shadows But Me.

Angelique is staring at the audience, saying, “Hurry! Hurry! Hurry!” The camera cuts to Joe lying on the floor, and it looks like someone in the studio is hurrying — a shadow passes over Joe, although the only person in the room is Angelique, and we can see in the next shot that she hasn’t moved.

I fixed the quote above, but what Angelique actually says is, “Then you will have to kill him, will you?”

For a guy who’s supposed to be bleeding to death from a stomach wound, Joe is remarkably clean. While he’s got the letter opener in his gut in act 1, there’s no blood at all. In act 2, when Barnabas has carried Joe all the way to the Old House and Julia has cut up his turtleneck, there’s still only the lightest suggestion of pink around Joe’s midsection.

While she’s cutting up Joe’s turtleneck, Julia tells Barnabas, “Perhaps you should go and get Maggie.” Barnabas stumbles, “Well, why should — what would that do?”

Once Joe’s chest is exposed, Barnabas and Julia both seem to find it difficult to remember their lines. Barnabas looks at the teleprompter, and says, “Julia, we — we — we can’t just keep him here.” This is probably the wrong cue, because Julia stammers Joe’s name a couple of times before she responds: “Joe… Joe… well, we can’t tell the police, of course, they’ll ask too many questions.” She dabs at Joe’s wound, and then follows with: “Who knows what will happen.” Barnabas cries, “Exactly!”

Then it looks like Julia decides to just take over Barnabas’ lines altogether. She comes up with the whole plan to catch Angelique, which was probably supposed to be Barnabas’ idea, and he just stands there and says “Yes!” and “Perhaps that’s true!” Then he says, “We must –” and looks at the teleprompter for more assistance. He finishes, “We must hope for the best! We must keep guard!”

Then Joe moans, “Where is she?” and Julia says, “Barnabas, get Julia — get, get Maggie.”

Later, Barnabas pronounces “imagination” as if the second syllable is “mage”.

The episode ends at a moment of high drama — Joe realizes that Barnabas is the one that Angelique dumped him for. Crazed, he grabs Barnabas by the lapels, and says, “I’ll kill you. I’ll KILL you!” Tomorrow’s episode begins wih Adam chatting with Harry at Nicholas’ house, and we don’t see Barnabas and Joe again until next Tuesday.

Tomorrow: Nobody Understands Dark Shadows But Me. 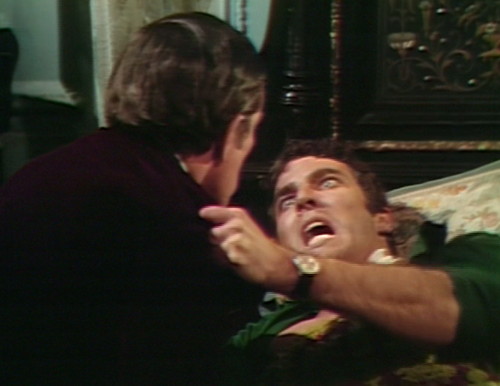