“Let’s just hope that what we suspect isn’t true.”

Danielle Roget, the notorious 18th-century murderess — the most evil woman who ever lived! — has been resurrected by unholy means, and she now inhabits a freakishly strong body created in a mad scientist’s lab. So here she is, a one-woman weapon of mass destruction, posing a clear and present danger to everyone in glowering range.

Today, we find her sitting on the couch and staring off into space, bored out of her everlovin’ mind. 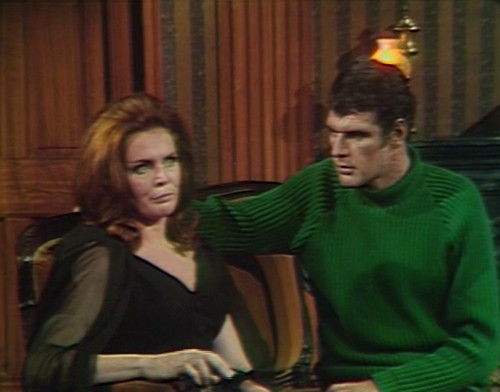 I mean, admittedly it’s not much of a honeymoon. Frankenstein and the Mrs. are crashing with Nicholas Blair, the honey-tongued warlock who wants to breed them, so he can create a new race of superbeings to serve Satan.

That sounds like a neat idea, but in practice, they’re just cooling their heels in the front parlor of Nicholas’ weird boarding house for misplaced lunatics.

Adam’s thrilled with his new playmate, staring intently at her and talking about their future together. For her part, Eve doesn’t seem to be investing as much in the relationship, by which I mean that she scowls and toys with a letter opener whenever he comes near her. She’s in a perpetual rage, clearly seconds away from stabbing her devoted life partner in the neck.

And she’s not even the only crazy dame in the house. Vampire sorceress Angelique ought to be lurking around here somewhere. You have to imagine that these two probably have a lot of difficult moments around the breakfast table. This should be the best season of The Real World ever.

But she’s displeased with the old ball and chain, and when Eve is unhappy, she tends to say it with sharp objects.

Nicholas just smirks and preens for the camera, for all the world like someone who hasn’t done something completely ass-backwards.

Because what was he thinking, exactly? His nefarious high-concept plan that’s supposed to be driving this storyline involves Adam and Eve populating the world with psychotic little monster babies. This should not be that hard to accomplish.

Nicholas summoned a spirit to provide the life force for Eve, and all he needed to do was choose a submissive, eager romantic who would get up off the lab table and fall straight into Adam’s arms. That’s clearly what Adam wants, and one look at Eve’s fierce beauty has made him forget all about his prior attachments.

According to all of the rules of common sense, this is actually the happy ending for everyone concerned. Adam is willing to run away with his Bride, and raise a brood of menacing hatchlings. Satan gets his new race of monsters, Nicholas gets a promotion, and honestly, every other character on the show would be perfectly happy to throw some rice, tie a few cans to the back of the limo, and never lock eyes with any of these freaks ever again. Problem solved.

But Nicholas’ interests are not aligned with the show’s interests. If all he does is lead the creatures to their breeding kennel and let nature take its course, then there’s no more story, and the writers have to come up with a whole new monster movie to rip off. They went to all the trouble of creating an undead super-vixen; they can’t just let her hang around pregnant for the next nine months.

And once the baby’s born… then you have an evil baby. So what? It can’t even walk. This is going to take forever. 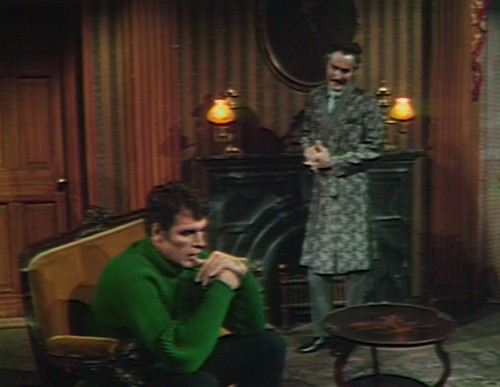 So here’s the problem: a devilish schemer like Nicholas needs a long-term agenda, and this is a short-term show. They’re not creating character dynasties that are supposed to endure for decades. The writers are making it up as they go along, and they only plan two or three weeks ahead. A front-burner storyline has to make things happen right now. There are five half-hours a week that need to get filled up.

This, sadly, is why Nicholas Blair doesn’t work. And he started out so well! I absolutely loved him when he first appeared, but that’s because everything was implied back then. Nicholas was a raised eyebrow and a sneer, spinning an intriguing and sinister web that we wanted to learn more about.

Now that he has to actually ante up and put his plan into operation, it’s obvious that there’s nothing there. He’s supposed to be this long-con Machiavellian brainbox, and he needs a complex plan to justify the attitude. But Dark Shadows is not a haunted House of Cards; they just don’t have time to give it that much thought.

Meanwhile, across town, Barnabas, Julia and Professor Stokes are sitting around an occasional table and holding a seance. They’re convinced that they must make contact with a Frenchman named Philippe Cordier, for reasons that should be obvious to us all. When you’re at a loose end story-wise, you light a candle and raise the dead; that’s just how television works.

“You were in love with her?” Stokes asks.

“I am in love weez her!” the temporary Frenchman growls. “She eez mine, and she ‘as been taken away!”

“It eez gone from ‘ere!” Philippe moans. “To anozher house — a house by ze sea!”

Julia gasps, “Nicholas Blair’s house!” and the Professor says, “Julia, please!” because that’s how you run a seance.

Philippe does a little monologue on the subject of Danielle, I weel revenge your honor!

Then Barnabas faceplants on the table, and the seance is over. The first thing that Stokes does is scold Julia for interrupting, because he is ridiculous.

But that’s exactly what we need on this show — headstrong fools, willing to rush in where angels fear to tread. This is exactly why Nicholas Blair doesn’t last on Dark Shadows, while Barnabas, Julia and Stokes take over the show.

These people are rash and impulsive, and the Dark Shadows ecosystem actively favors characters who stumble from one crisis to the next. A faux-schemer like Nicholas just stands around and looks silly, fully committed to a secret plan that nobody in the audience understands or believes in. But these three nutjobs don’t even pretend to make sense; they just light a candle and get to work.

Barnabas tells Julia about looking for Maggie: “Well, when we came back from the — searching, someone told us that Maggie was at home, and wanted to see us. We got there, and she greeted us as though nothing had happened. Obviously, she — her memory of what had happened was completely gone.”

At the start of act 1, there’s a little blue spot reflected in the lens of one of the cameras. It stays visible through the first scene.

Barnabas tells Julia, “If he did erase Maggie’s memory, he must have known — he must have done it knowing he was helping me.”

This is one that you probably wouldn’t have noticed with 1968 TV reception, but it shows up on DVD: When there’s a close-up on Eve, you can tell that her eyebrows are painted on, and there’s flesh-tone makeup covering her real eyebrows.

Professor Stokes tells Barnabas and Julia, “I went to the place where Adam’s been hiding for the last few months,” but two episodes ago, Carolyn was angry that Stokes had told Barnabas where she was keeping him. So why is he still acting like it’s a secret?

At the start of act 3, Stokes has trouble snuffing out the candles. This is a common problem on Dark Shadows.

During the seance, the camera focuses on the candle as it mysteriously blows out. It takes a couple tries.

In the middle of act 3, as the scene changes from the Old House to Nicholas’ house, the boom mic doesn’t pick up the first few words of Adam’s first line.

While Adam and Eve are talking in act 3, the “Angelique’s Spook” music cue starts to play, indicating that Eve can feel the presence of a spirit in the room. But the cue comes in about ten seconds too late, so it looks like Eve gets agitated and looks around for no reason.

There’s a new lamp at Nicholas’ place — or at least, a lamp that I don’t recall seeing before. It’s got the same scalloped texture as the green lamps that we’ve seen popping up all year, but the new one is yellow. It gets a nice two-shot with Adam at the start of his scene in act 1. 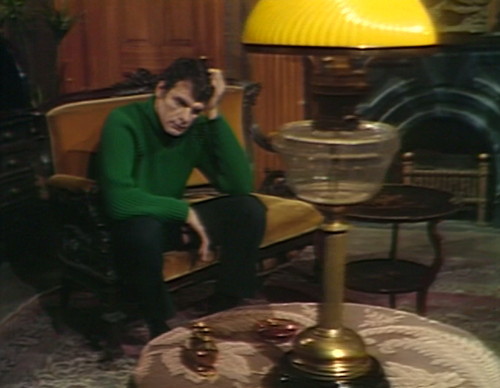 23 thoughts on “Episode 600: The Mate That Fate Had Me Created For”