“We’re not going to solve my mother’s problems by talking about them.”

You know, I like Carolyn Stoddard a lot. She’s a great soap heroine — she’s pretty and funny and feisty, she’s got a smart mouth, she falls in love with all the wrong men, and she’s got this little catch in her voice when she’s sad that makes you want to go out and rescue a cat from a tree or something. I think she’s fantastic.

But I don’t think she’s very good at planning ahead. That’s where Carolyn and I part ways. She’s got this enormous Frankenstein that she keeps in an abandoned wing of the house, and she comes by every once in a while to bring him food and books and a clean turtleneck, and I don’t think she has the slightest idea what’s supposed to happen next. The writers don’t, either. Bad planning is kind of an epidemic around here.

On days like this, I try to keep perspective by reminding myself that I actually like the fact that the Dark Shadows writers never have more than a three week lead time on story development, and they’re just making things up as they go along, like Wallace and Gromit hastily laying down train tracks just ahead of the speeding locomotive.

In fact, that’s one of my favorite things about the show, because it has the restless energy of a down-on-its-luck improv troupe halfway through a sketch, always just one inspired ad-lib away from something unexpected and breathtaking. And they do hit that magic spot, more often than you’d think possible.

The downside is that sometimes they’ve just got a guy in a room, with no idea what they’re going to do with him.

Adam’s been cooped up in this shabby studio apartment for going on two months now, and it’s pretty clear that they just don’t know what the next story beat is supposed to be. They’ve been banging on the “Adam is slowly falling in love with Carolyn” idea so hard that they’re getting just as bored with it as we are.

So today’s episode finds Adam playing a one-handed game of chess, and teasing his imaginary opponent.

“Nope,” he says, shaking his head. “That would be a very bad move. You should read that book on chess more often; I thought you’d play better than you do, Carolyn. Now, if you don’t want to lose that knight, you’ll have to move the, uh…”

And then he trails off. So: that’s your challenge for the day. Deal with that. 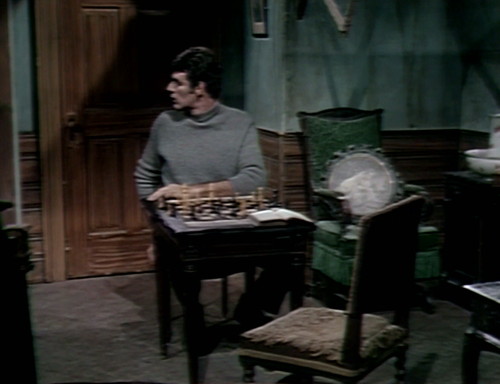 Because it was really not that long ago that Adam could hardly put a sentence together. He said things like “Willie bad! Adam tear chain!” Now he’s lecturing imaginary people on how to play chess.

Mel Brooks’ 1974 comedy Young Frankenstein has the monster tap dancing in a tuxedo and singing “Puttin’ on the Ritz”. Even Brooks wouldn’t have thought of making Frankenstein a grandmaster. 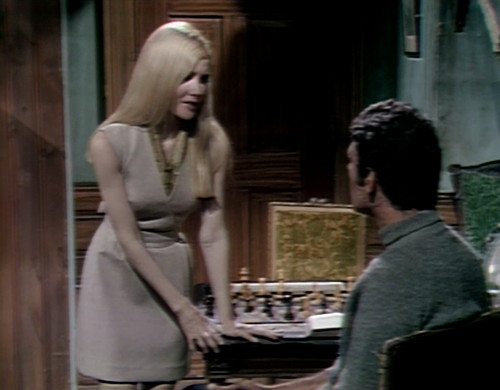 So when Carolyn arrives with today’s rations, she really has no idea what’s been going on up here. She’s upset right now, because Elizabeth is convinced that she’s going to be buried alive.

Adam says that Liz should go to a doctor, and Carolyn tries to humansplain.

Carolyn:  People are sometimes very complex in a way you don’t understand, simply because you don’t know very many people. My mother won’t go to a doctor, that’s all. What’s wrong is in her mind. She believes things she shouldn’t.

Adam:  Well, I have many thoughts, complex, too, in my mind. I’m positive.

Carolyn:  Of course you do.

Adam:  And I believe things that I shouldn’t, too. 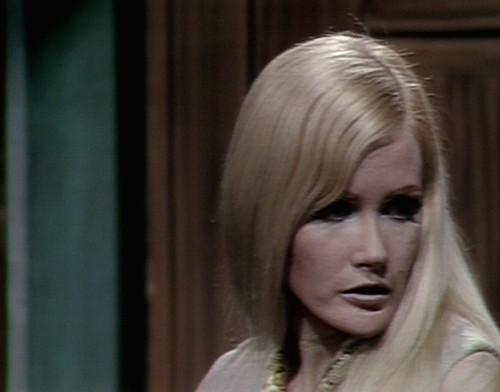 Carolyn:  We’re not going to solve my mother’s problems by talking about them.

That’s the moment that she isn’t prepared for.

He crosses the room, and picks up a book.

Adam:  Women read him, too. Have you?

Adam:  Oh. I imagined that we would discuss Freud. 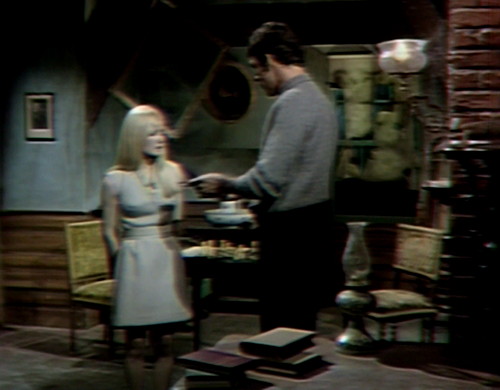 He hands her the book.

Adam:  Well, here — you take this book that I’ve read on Freud.

Adam:  And you read it tonight. We can discuss it tomorrow.

So that’s the show that we’re suddenly watching — the story of a misshapen mockery of a man brought to life on a mad scientist’s operating table, who’s apparently sitting on his own in a cobweb-strewn prison, studying for his master’s degree. It’s the mash-up of Frankenstein and Flowers for Algernon that you never realized you needed in your life.

And I love this, obviously, because it’s such a serialized-narrative idea — an approach to the situation that would only occur to a writer who’s living with this story in real time.

Adam was introduced as an innocent child when he got up off the slab, confused and scared at waking up in a world he didn’t understand. Those early story beats had to involve some fairly dramatic intellectual bootstrapping, because otherwise we have to watch the guy get potty-trained.

But now they’ve left him cooped up in a dorm room for two months with an apparently endless supply of hardcovers, taking the “you’re learning so quickly” idea to its logical conclusion, namely: rogue scholar.

So who needs planning, really? Ten minutes ago, if you’d asked Sam Hall where he thought the Adam story was going, the phrase “psychology grad student” would not have come up. It just kind of spills out as Hall’s writing the scene, because the B-plot in today’s episode is about Elizabeth’s mental breakdown, and the characters have to talk about something.

It’s the equivalent of a writer’s ad-lib — a crazy idea that occurs to him on the spot, while he’s frantically typing to meet a tight deadline. And now it’s on television. I wonder what they’ll think of next?

At the beginning of the episode, Liz wakes up in a different nightgown and with a different blanket than the ones she fell asleep with. (This episode was recorded out of sequence, two days before yesterday’s episode, not that it matters. They just don’t bother to keep track of stuff like that, because nobody had a VCR in 1968.)

When Carolyn is looking at the chessboard and agreeing to read Adam’s book, something bumps into the camera.

Liz calls Tony, and asks him to take over her legal affairs, which he’s apparently happy to do. When Tony was introduced last November, his entire character was based on his hatred of the Collins family.

When Liz wakes up, her bedspread is the Collinsport Afghan, a colorful blanket that pops up all over town. We just saw it at Maggie’s house last Thursday.

Liz tries to call her lawyer, Richard Garner, who doesn’t come to the phone because he’s not on the show anymore. His last appearance was in episode 246, in June 1967.

A close-up on Tony’s ringing telephone shows that his number is Collinsport 4099. This was also the number for Collinwood in episode 44, and for Professor Stokes in episode 550. Must be a popular number.