“Why can’t I speak? Why can’t I move? They’re going to bury me alive!”

Today, there’s exciting news in daytime television to discuss — that is, if by “today” I mean early September 1968, and if by “exciting news” I mean that I find minor adjustments to network television schedules exciting.

And, guess what? I mean both of those things!

Because today is the day that those scaredy-cats at CBS move The Secret Storm out of the 4:00pm timeslot, so that it doesn’t have to compete with the unstoppable ratings juggernaut that is Dark Shadows.

Yes, our weird little cow-town spook show is now the 800-pound gorilla of the network daytime scene. In mid-July, ABC moved Dark Shadows from 3:30 to 4:00 so that the teenagers would be able to keep watching when school started in September, and the timeslot change has worked so well that the other networks are just moving shows out of the way.

So today, CBS is rearranging its daytime lineup — moving The Secret Storm from 4:00 to 3:00, expanding Search for Tomorrow and Guiding Light from 15 minutes a day to half an hour, and cancelling the game show To Tell the Truth.

For the first time, Dark Shadows is the only soap opera in its timeslot, and as far as the American public is concerned, the other networks could just take the rest of the afternoon off and nobody would even notice. If Dark Shadows is on, why does anyone need to watch anything else? 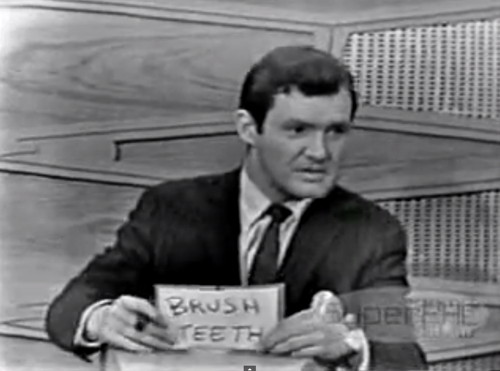 Now, channel-surfing didn’t exist in 1968, because if you wanted to change the channel, you had to get up off the couch, walk over to the television, turn a knob on the side of the set, wiggle the antenna according to some arcane system of wishful thinking, murmur a prayer to the television gods, and by that point, you’re already standing up and you might as well go do something useful with your life. I mean, how good could The Match Game possibly be?

That’s what NBC was showing at 4:00 — The Match Game, a relentlessly grim half-hour death march where ordinary people and tired celebrities joined forces to answer questions like “What’s something that you do at the same time every day?”

This wasn’t the Match Game where Charles Nelson Reilly would waggle his eyebrows and say something naughty — that’s the mid-70s revival, which was almost worth watching, if you were really starved for mid-afternoon entertainment.

The 1960s Match Game was six years into a seven-year run, and their idea of a good time was asking, “Write down one of the words to Row, Row, Row Your Boat other than Row, Your or Boat,” and then waiting for Orson Bean to write down an answer on a little card. I guess some television shows care about making a contribution to world culture and some don’t, and that’s all there is to it.

Meanwhile, at CBS, The Secret Storm was airlifted out of the 4:00 slot, and they dragged in the new sacrificial victim — Art Linkletter.

Art was the host of Art Linkletter’s House Party, which began on CBS Radio in 1945 and made the jump to TV in 1952. House Party was the first reigning example of a genre that would someday come to rule daytime television — a rambling entertainment talk show that featured audience participation games, celebrity interviews, and household hints, held together by a genial comedian host.

This was the territory that would one day be inhabited by Rosie O’Donnell, Ellen DeGeneres, Mike Douglas, Merv Griffin, and Regis and Kathie Lee. Art was the original ruler of this kingdom.

The most popular segment on House Party was “Kids Say the Darndest Thing,” where Art would spend ten minutes interviewing elementary school kids, pitching softball questions like “What do you want to be when you grow up?” and then waiting for the kid to be adorable, so Art could do a quizzical take to the camera. This was sure-fire, one of the most universally-appealing acts ever performed on television, and Art rode that horse as long and as hard as he could.

But by 1968, the format was getting tired, and compared to The Dating Game and the increasingly-youth-focused ABC soap opera lineup, House Party looked like a fossil. For the show’s final season, CBS changed the name to The Linkletter Show, cut it from 30 to 25 minutes, and put it opposite Dark Shadows, which was basically its polar opposite.

In today’s Dark Shadows episode, though, there’s a sentimental scene that looks like it could fit into the old housewife-pandering model.

Elizabeth — back from a lengthy stay at the hospital — is going through her closet, giving her clothes the once-over and then laying them on the bed to no apparent purpose. Her daughter Carolyn enters, and smiles.

Liz holds up a red outfit, and Carolyn chuckles, “I’d just as soon you throw that one away.”

Liz:  I remember the day that I bought it.

Carolyn:  I was with you, in Boston.

Liz:  Yes. We were on our way to lunch, before the matinee.

Carolyn:  Mmm. It was your birthday.

This is a charming little exchange, which is only spoiled by the fact that Elizabeth didn’t leave the house for eighteen years, because she was hiding her husband’s dead body in the basement.

I don’t know when this birthday shopping trip is supposed to have happened, but she’s only had about fourteen months in the outside world, and they spent four months of that standing around frozen in the drawing room.

Carolyn suggests they take a trip to Boston and spend the weekend there, now that Liz is obviously feeling better, but Liz has other things on her mind.

Liz:  Carolyn, I want you to promise me something.

Carolyn:  If you’ll come with me — anything.

Liz:  No, no. I mean, promise me something seriously, without any qualifications. 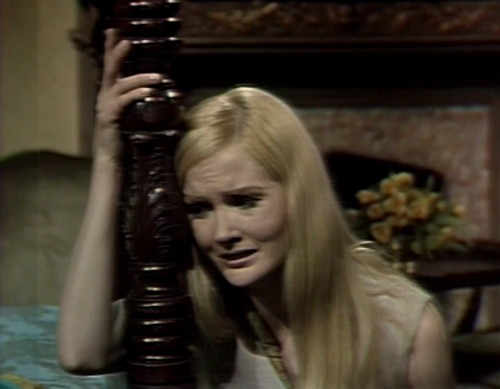 And with those five words, the sweet mother-daughter moment is shattered, and the show turns back into Dark Shadows.

Elizabeth has been cursed by a witch to think about nothing but death — and today, the witch appears in a four-minute dream sequence to move the storyline goalposts.

Under the new arrangement, Liz is going to worry about her own death so much that she’ll actually fall into a coma, and her loved ones will bury her alive. And this is what’s going on while Gene Rayburn asks his guests to complete the sentence “To a rich man, blank dollars means nothing.”

So you have to admit that Liz has a point. She was the featured attraction of Dark Shadows when it premiered two years ago, a dramatic role played by a glamorous film star. By now, she’s so irrelevant that the writers don’t even remember that she was a recluse, which was the whole point of her storyline.

So here lies Elizabeth Collins Stoddard, former television character. She’s going to be milking this “when they think I’m dead” routine for the next four months, and her only chance for survival is to do it so well that they decide to keep her around.

It’s going to be a tough year for Liz, but at least she’ll survive it. Just think of what they’re going to do to poor old Art Linkletter.

When Angelique wakes Jeff up, there’s a terrible scraping sound from just off-screen.

During Vicki and Roger’s conversation in the drawing room, the camera goes completely out of control for a moment — apparently a collision between the camera and the drinks cabinet. The actors suppress smiles as they go on with the scene.

When Jeff shows up at Collinwood to see Vicki, he’s just been bitten by a vampire, but he doesn’t have the tell-tale wounds on his neck. He even rubs his neck a couple times, just to draw attention to the fact that he’s not wearing the regulation post-bite turtleneck.

There’s another bad moment for the cameraman at the start of Liz and Carolyn’s first scene. As the camera moves around Liz, it wobbles and then swings out of control for a second.

Some familiar props show up in the Liz/Carolyn “cleaning out the closet” scene. The Ralston-Purina lamp has made its way upstairs from the Collinwood study, and the first dress that we see Liz examining is the green, purple and orange outfit that Cassandra used to wear when she was casting spells. 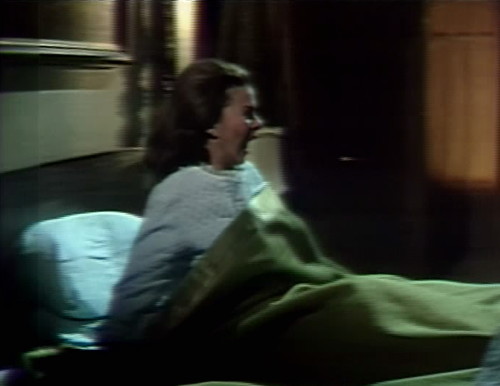