“Well, of course it’s necessary; we can’t have prowlers on the place, attacking people.”

Carolyn and Tony are reunited, at last. They were torn apart by the weird, mad woman who married uncle Roger, and who seemed to delight in luring Tony away from Carolyn’s side. But the witch has melted away, as witches do, and with a little time, the betrayal fades, the harsh words forgotten. They’re just two kids — funny, and headstrong, and good-hearted — finding their way back to each other.

But it’s wrong. It’s all wrong! Can’t you see it? Something terrible has happened to Carolyn. Some dark new creature has crawled inside her skin and is making itself at home in her flesh. 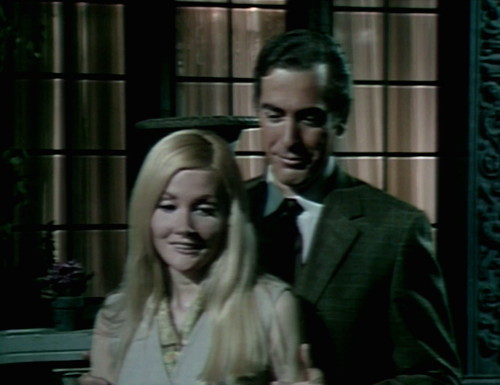 I mean, last time I checked, this is how Carolyn looked when she met Tony in the moonlight, out on the terrace.

And now look at her. In the blink of an eye, she’s transformed into a totally different person. She’s, like, three inches taller. Why doesn’t Tony notice? Why doesn’t anyone notice?

I mean, it’s dark outside, I guess, and Tony — like many young men meeting their sweethearts on the Collinwood grounds — is always at risk of being smacked on the head by a passing Frankenstein, so you can understand if he’s a little distracted. Still, total full-body transmogrification usually makes itself evident at some point. Maybe Tony gets smacked on the head a lot more than we ever see.

Honestly, with all the money that the Collins family has, you’d think they could install a simple retinal scan at the airlocks and entrance portals to keep things like this out of the drawing room. It’s just basic security protocol.

But everyone always thinks it won’t happen to them. Now we’ve got some hoodoo from the notworld crouching on the floor, probably leaving a stain on the rug and radiating some kind of disruptive energy pattern that’s punching holes in everyone’s aura. It’s not doing Tony’s headache any favors, I can tell you that much. 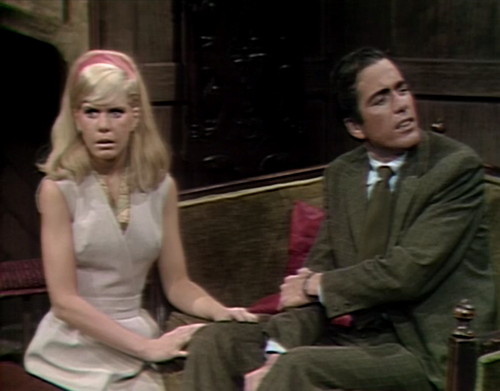 I mean, I don’t want to be that guy, you know? I’m not trying to be judgemental about how other people live their lives. If the Collins family has an open door policy for any random glitch in the matrix who stops by pretending to be their flesh and blood, then sure, knock yourselves out.

All I’m saying is that if you’re going to accept the daughter of the house suddenly sprouting two dress sizes and looking at the world through a glowing red heads-up display analyzing mission priorities, then it’s going to make Christmas shopping an absolute nightmare. People just don’t think ahead.

Anyway, by now it’s crawled up onto the couch, and it’s pawing at Tony, the poor guy. It’s probably going to lay its eggs inside of him or something.

But whatever that thing is — cyborg cryo-assassin or telepathic mindworm or demonic nightmare cuckoo from the left side of the sun — it’s obviously not safe to touch.

This is the last time we ever see Tony Peterson. The creature takes his hand and walks him out to his car, there’s a hiss of static and the smell of burnt almonds, and now we’re down one lawyer.

Seriously, we’ve got to get an exorcist in here. This is ridiculous. I won’t have it; I simply will not have it.

At the beginning of the episode, as the camera approaches Carolyn and Tony, a figure walks past the lighted window behind them.

Over the opening titles, Louis Edmonds announces, “Today, the part of Caroline Stoddard will be played by Miss Diana Walker.”

This is the last episode plagued by the faulty camera that puts a thin green stripe down the left side of the frame. It broke a couple weeks ago, and they’ve had no choice but to go ahead and use it anyway. This episode was taped on a Friday, so they must have fixed it or replaced it over the weekend. They shot these episodes out of order, so episodes 575-577 used the repaired camera.

At the start of Carolyn and Roger’s scene in act 4, you can see her standing in the foyer, waiting for her cue to enter the drawing room.

Carolyn’s understudy is played by Diana Walker, who I’m sure is very nice and not a nightmare creature at all — or, at least, not any more than actresses usually are. Diana played Gloria Upson in the original 1966 Broadway production of Mame, with Angela Lansbury. She also played Dr. Susan Burke on the CBS soap As the World Turns in 1967, and she played Mary Hathaway, a lead role on another CBS soap, Where the Heart Is, from 1969 to 1973.

As I mentioned, this is the last appearance of Tony Peterson, and we won’t see actor Jerry Lacy again until April 1969, when he’ll show up as another member of the Trask family in the 1897 storyline.

During his time off from Dark Shadows, Lacy appeared on Broadway doing his killer Humphrey Bogart impression, in Woody Allen’s comedy Play It Again, Sam, which opened in February 1969. As an odd coincidence, Diana Walker was also in the Play It Again, Sam cast.

Lacy also appeared in the 1972 movie version of Play It Again, Sam, and if you haven’t seen it, you should check it out. It’s funny and sweet, and he’s great in it.

We never find out what happened to Tony — just another cast-off soap character who walks off into the void — but Big Finish has produced a charming series of audio plays with Jerry Lacy and Lara Parker playing Tony and “Cassandra”, solving supernatural mysteries together. The Death Mask was released in 2011, and was followed by The Voodoo Amulet and The Last Stop in 2012, The Phantom Bride in 2013, and The Devil Cat in 2014.