“But it isn’t possible, Julia! He exists by day!”

Tom Jennings — local handyman, vampire, and one of the cutest guys on Dark Shadows — died yesterday, following a brief struggle with a main character. He was 28 years old, not counting the last two weeks.

Now, Tom was a fun character, with family and friends and an entertaining story point and several attractive hairstyles, so we would be well within our rights as members of the Dark Shadows audience to mourn his passing, but it’s just not possible right now.

Barnabas and Julia are as happy as could be, and so am I, because Tom’s destruction means that they get to play Junior Detectives again. 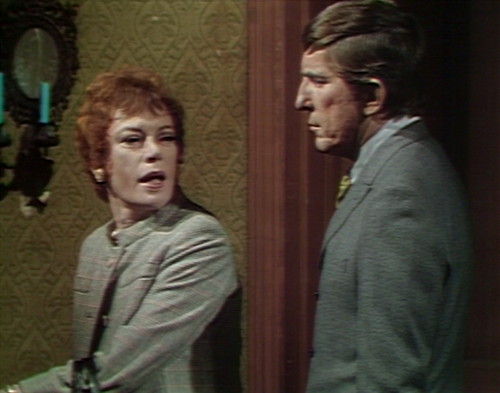 The thing that everybody knows about Dark Shadows is that it was a slow-moving, low-rated daily soap until the vampire joined the show, and then it became an instant lightning-in-a-bottle success. This is not actually true. Barnabas is crucial to the show’s appeal, but on his own, he’s actually a little bit dull — a pompous, self-involved character who glides from one tepid, passionless romance to the next.

The character who actually brings Dark Shadows to life is Barnabas’ best friend, Dr. Julia Hoffman, who joined the show three months after the vampire’s debut. Like Professor Van Helsing in Bram Stoker’s novel Dracula, Julia is funnier and smarter than the vampire, generates more plot points and keeps everything moving between meals.

But, like Van Helsing, Julia has to stand next to the monster, which means that everyone forgets she exists, and the world is filled with remakes and spin-offs that don’t include her. It’s kind of like if every adaptation of Sherlock Holmes focused on Dr. Watson, and half the time Holmes didn’t even appear.

Here, I’ll demonstrate. For the last couple weeks, Julia was under the spell of hottie vampire Tom, which means she got a handful of make-out sessions with a cute boy, and then spent the rest of the time looking pale and interesting while all the other characters stood around and talked about her storyline. But now that Tom’s been staked and the crisis has passed, she wants to get back to work.

Julia has deduced — while on her deathbed, from a standing start, and based on no evidence at all — that the recent vampire attacks are the work of Nicholas Blair, the wealthy and mysterious stranger, who almost certainly would have been named “Nicholas Devlin” if they hadn’t wasted that surname on another character, two years ago.

Barnabas:  Well, he caused Cassandra to die, I’m sure of that.

Julia:  Yes, so am I. I’m certain he had something to do with Tom Jennings, too.

Barnabas:  You still think that Blair made Jennings what he was?

He says this as if it’s been a long-standing theory of hers, even though they’ve clearly never talked about it until this very minute.

As always, Barnabas does nothing but feed Julia straight lines.

Barnabas:  But it isn’t possible, Julia! He exists by day! We’ve both seen him!

Julia:  Barnabas, I know he’s not a vampire, but I know that a vampire does exist — somewhere, very close to us.

(She narrows her eyes.)

Julia:  I believe that Nicholas Blair is involved. We must find out what his involvement is! We must find the vampire — and destroy him, or none of us will be safe!

And there she stands — the protagonist. She’s got a secret murder lab in the basement, by the way, where she’s assembling a human woman out of leftover carcass parts. You’d think that would be enough story to keep anyone busy, but here she is, poking around in other people’s affairs, and stirring up trouble. 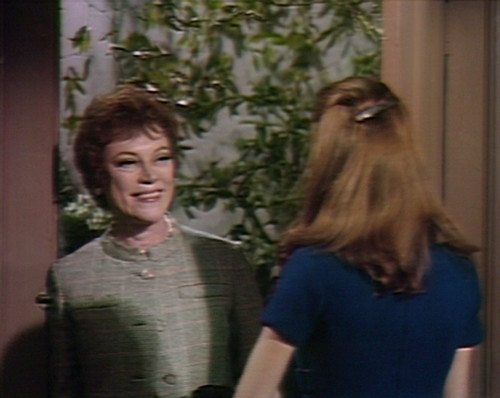 So imagine being Maggie Evans. There’s a knock at the door, you open it, and this is on the other side.

As a general rule, if somebody who’s smiling like this wants to come into your house for a visit, then you should always welcome them in. There’s no telling what they’ll want to do, but it’s sure to be an invigorating experience, one way or another.

Nicholas Blair has been paying a lot of attention to Maggie lately, and Julia wants to know why. So she’s come over to ask some leading questions, and let Maggie chatter away. Julia cocks her head to the side, which means that she’s recording the call for quality assurance purposes.

Here’s the intel she picks up during this surveillance mission:

* Joe didn’t report to work for the last three days. He’s been standing her up, and he’s not answering his phone, and Maggie is terribly worried about him.

* Nicholas has offered Maggie two thousand dollars for one of her father’s paintings. None of Sam’s paintings have ever sold for that much, but Nicholas was insistent.

* Maggie hesitated to take Nicholas’ offer, because it felt like charity, but she needs the money. Nicholas is coming over later today, to pick up the painting.

So Julia’s got two strong leads here. Joe is clearly another victim of the vampire outbreak, and there must be some reason why Nicholas is so eager to get his hands on that painting.

Julia returns to the Old House to debrief.

Barnabas:  Well, was Maggie able to tell you anything about Blair?

Julia:  Not exactly. She thinks he’s charming, but all she knows is that he’s interested in buying one of Sam Evans’ paintings.

Barnabas:  I was afraid your visit would be pointless.

Julia:  Oh, it wasn’t pointless, Barnabas. I did learn something.

Julia:  Nicholas Blair will be out of his house at five o’clock.

Unfortunately, Julia isn’t holding anything but her gloves, because that would be a great moment for a micdrop.

Barnabas:  How do you know that?

Julia:  Because he has an appointment with Maggie, to discuss the painting. His house will be empty — probably for an hour, at least. 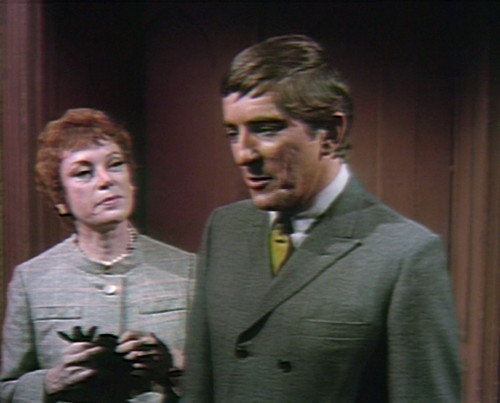 Barnabas:  Are you proposing that we break into the house, and search it?

And look at how happy they are. The Junior Detectives, with a whole evening of breaking and entering to look forward to. The game is afoot.

Tomorrow: This Strange Way That You’ve Been Behaving.

During Julia’s visit to Maggie’s house, when Julia says, “Well, then you’d be foolish not to accept it,” there’s a lot of shuffling around in the studio, and the shadow of a camera passes behind the sofa.

At the start of act four, we see the House by the Sea in front of a chromakey sunset. Something bumps the camera aimed at the photo of the house, which moves independent of the background, and makes it look like the house is shifting around.

When Barnabas walks into the House by the Sea and looks into the drawing room, there’s someone just on the right side of the frame who quickly moves out of the way of the shot.

Tomorrow: This Strange Way That You’ve Been Behaving. 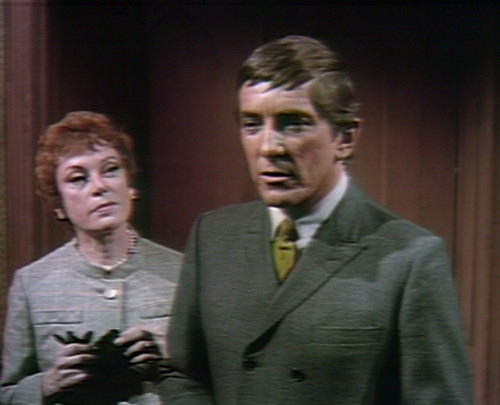