“Did someone ever look at me, as I now look at you? No… or I would not be alive now.”

We open the week with a fight to the death between the already-dead, as ex-vampire Barnabas Collins battles with still-vampire Tom Jennings, in order to free Barnabas’ best friend, Julia, from Tom’s hypnotic spell.

It’s a crucial step in Barnabas’ development from villain to hero, a Jungian transformation of the psyche. Barnabas is both prince and dragon here — wrestling with his own demons, confronting and rejecting the darkness in his own soul. It’s also one of the goofiest things you’ll ever see on television.

“It’s light!” Barnabas cries, as he gestures desperately at the window of this abandoned crypt. “You don’t have much time!”

Tom can’t say anything, because his mouth is full of plastic fangs, so he has to communicate using the tools available to him — snarling, baring his teeth, rolling his eyes and waggling his head around. People talk about chewing the scenery, but Tom is actually attempting to do it.

People think that this is what Dark Shadows was like all the time, and oh, how I wish that it was. It’s fantastic.

Tom had the upper hand at the close of Friday’s episode, and it looked like Barnabas was about to become the latest victim of Drac-on-Drac violence.

But here comes our old friend, the Convenient Rooster, who’s always nearby when we need him. We never actually see the putative farm where C.R. lives; he’s just here as a referee for vampire battles that are running long.

So then we get what I feel is one of the Great Moments in Vampire Fiction.

Pinned to the coffin, Barnabas hisses, “Do you hear it? It’s dawn! Unless you get back, you will be dust!”

And Tom kind of looks around and silently emotes, as if to say: Oh, right. Fuck. That’s a good point, actually.

Barnabas takes advantage of the distraction and tries to break free, but Tom still has some fight left in him. He grabs Barnabas, and there’s another round of freestyle strangling as the violins trill anxiously in the background.

Tom gets the advantage, and he backs Barnabas up against a pillar — but the pillar wobbles, because it’s not attached to anything in particular, and Tom has to loosen his grip slightly so that he doesn’t knock the set over.

It’s an incredibly dramatic moment for, like, three different simultaneous reasons, and I honestly don’t understand why this isn’t universally regarded as the best TV show ever made. Just try to think of a scene that’s more dramatically compelling than this. It can’t be done.

Tom finally chokes Barnabas until he passes out and drops him to the ground, and it looks like Barnabas is dead and Tom is the new main character of the show.

But Convenient Rooster still has something to say about it, and Tom reacts to the sound in the biggest possible way. If this is his last scene on the show, then he’s going to give the people their money’s worth.

And it works, too. Tom was only supposed to appear in eight episodes, but he’s so sexy and ridiculous and fun that people wrote fan letters by the handful, asking the producers to bring him back. We’ll see Don Briscoe again in two months as Tom’s twin brother, because soap operas are awesome like that.

Barnabas approaches the casket, and then they cut away to another scene for thirty seconds so they can set up the next shot.

Returning to the scene of the crime, we find Barnabas already opening the lid… 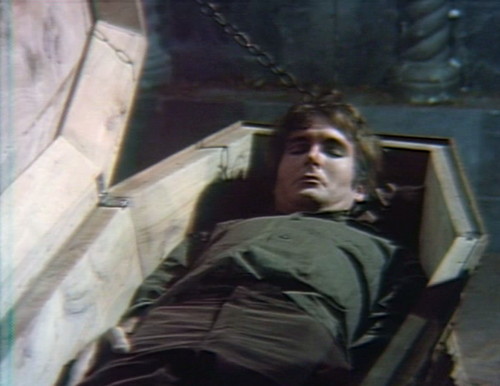 … because Don Briscoe clearly does not fit in the coffin. His head is kind of propped up against the side, and the shot is framed so that you don’t see his feet dangling out the other end. It’s completely adorable.

And it’s these weird little theatrical moments — the eye-boggling, pillar-wobbling, rooster-to-the-rescue lunacy of it all — that makes Dark Shadows such an engaging and unforgettable show. This is something that the remakes and spin-offs can never capture — the feeling that the audience has to actually participate in the action, leaning forward in a desperate struggle to pretend that our disbelief could possibly be suspended.

Barnabas gazes kindly at his next victim.

Which is basically true, except for Willie and Maggie and Julia and Jason and Ben and Angelique and Joshua. And us, obviously. 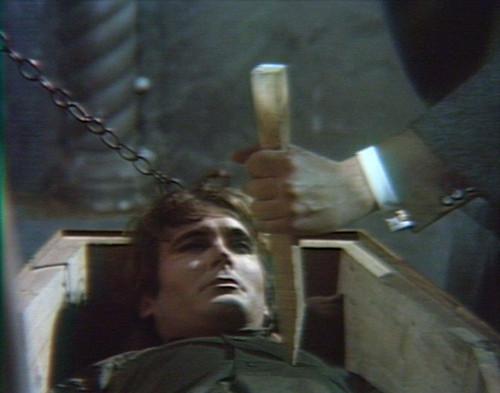 So Barnabas places the stake over the heart of his evil counterpart, completing the cycle of ego death and transforming into something even more complicated and beautiful. He bestows the gift of oblivion, like the handsome prince waking Snow White with true love’s kiss, but in the opposite direction.

And Tom opens his eyes as the hammer falls, because he was never dead in the first place, and he never will be. Not for me.

There’s still a green stripe down the side of the frame for one of the three cameras. This has been happening for more than a week. I was hoping maybe they’d be able to fix it over the weekend, but no such luck. I don’t remember how long this goes on for. It’s one of the not-charming bloopers.

In act 3, when Julia thanks Nicholas for bringing her flowers, there’s a super-fast and messy zoom in on Julia’s face. The cameraman obviously thought that they had cut away to another camera, and was just lining up for the next shot.

Liz and Roger are arguing about whether she saw a coffin in the old crypt. With the word “coffin” on her mind, Liz says, “Ask Dr. Coff — Hoffman, she can tell you it was there!”

Julia tells Roger that there’s no point in sending Liz back to Windcliff if she doesn’t want to go: “If she doesn’t coop — want to cooperate, she won’t.”