Roger is pacing in the Collinwood foyer when Julia enters, bright as a button.

“Good morning, Roger,” she chirps. “Such a beautiful morning, I decided to go for a walk before breakfast.”

Yes, she’s currently engaged in a life-or-death struggle with an undead sorceress. But this is Dr. Julia Hoffman, and she does not give a shit.

But Roger’s in no mood to discuss mornings, beautiful or otherwise. His wife Cassandra disappeared last night without a trace, and he’s worried. She’s only been gone overnight, but Roger doesn’t have a great track record in the wife-keeping department, so naturally he fears the worst.

What’s actually happened is that Cassandra was tied to a tree by the ghost of an 18th-century witch hunter, who recognized her as the witch, Angelique. The ghost performed an exorcism on her, sending her into the everlasting fire which burns all evil.

Roger’s not very good with the wife-choosing, either. Wives just aren’t his strong area overall. 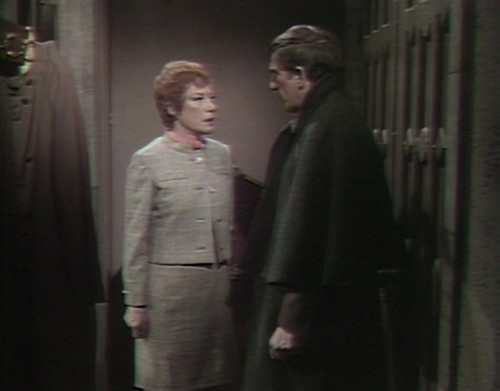 Barnabas comes over, and Julia says, “Barnabas, thank goodness you’re here. I wanted to talk to you before the police came.” That’s pretty much the standard conversation-starter for these two.

She tells him that Roger has reported Cassandra as missing, and Barnabas doesn’t know what to think.

Barnabas:  I can’t believe it.

Barnabas:  It is a fact of my existence, Julia.

Julia:  But you have escaped her! I feel that!

Barnabas:  If she has disappeared — and it’s possible for me to live out my life… No. I just can’t feel it. In a moment, she’ll come through that door with some absurd excuse.

And they keep going back and forth for a while. This whole episode is basically an ESPN post-game wrap-up, with Barnabas and Julia providing color commentary on their own storyline. 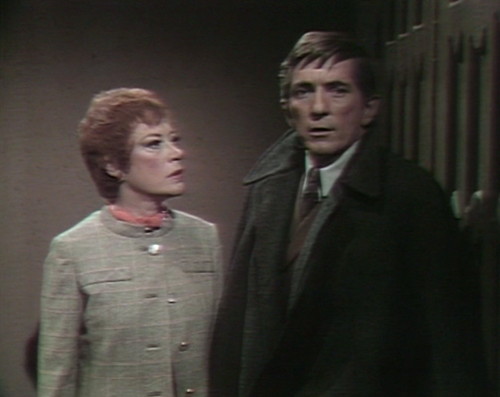 Julia’s convinced that the spirit of Reverend Trask has taken care of Cassandra.

Barnabas:  He took his revenge on me! For all we know, he’s gone back to that other world.

Julia:  Until he finishes with Cassandra, he can find no peace. You know that.

She says this as if there are well-known guidelines that ghosts have to follow. Who knows why dead people act the way they do? They’re super complicated.

But Julia’s had more experience with this stuff than I have, so I guess she’s the expert.

Julia:  If there was only a way we could know! Why doesn’t he appear to us? Doesn’t he understand that we want to know that he has completed what he came here to do? If only there was some sign!

And then she thinks of one, because Julia knows everything.

Julia:  Barnabas — the skeleton! His skeleton! When his ghost materialized, the skeleton disappeared. Don’t you see? If he’s taken Cassandra, if he’s ended it all, the skeleton will be hanging back in the place that it was. He will be at peace at last!

So I guess that’s how it works. That’s the rule on Dark Shadows — whoever comes up with the silliest hypothesis wins. 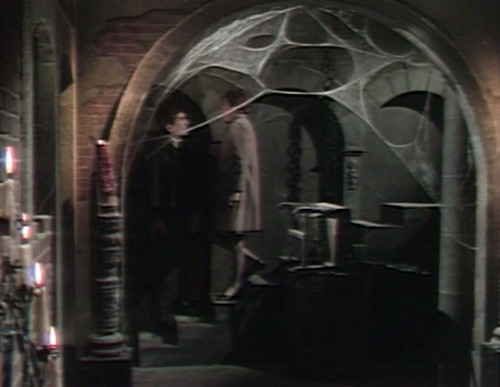 So they hurry over to the Old House, and head downstairs to the haunted cellar.

And it’s a happy ending, after all; Trask’s skeleton is back. If Hallmark ever put out a card that said, “Congratulations! Human remains have rematerialized in your basement!” then this would be the perfect opportunity to use it.

Barnabas still isn’t quite sure that Cassandra’s gone, and he calls out to her: “If you still exist, Angelique — let me see you!” He waits about three seconds, and then Julia declares victory, because she totally understands how dead people work.

Back at Collinwood, Liz is still under the impression that she’s Naomi Collins, an ancestor who died in 1796. There doesn’t seem to be any way to shake her out of it. Roger and Julia try to call her Liz a bunch of times, and they tell her that she’s talking about people who have been dead for more than a hundred years, but she just accuses them of plotting against her, and trying to drive her mad.

They talk this over for quite a while, and don’t really seem to get anywhere. She thinks that she’s Naomi; they think she isn’t. Maybe they could agree to disagree.

The real problem is that Liz seems to have magically learned everything that Naomi knew just before she died, and she’s ready to spill it all.

She tells them that she knows Barnabas isn’t dead, and she wants to see him. “You can’t stop me,” she says. “I don’t care what he is. I love my son — even if he is one of the living dead.”

Julia takes this kind of big, executing several facial expressions in a row.

Julia runs back to the Old House, so she can talk things over with Barnabas some more.

If Cassandra is really gone, then why is Liz still under the witch’s spell? Maybe she’s still around after all. And so on.

So Barnabas looks around the room, and engages in some more blue-sky necromancy.

Barnabas:  Angelique… in this very room, not three hours ago, I said to you that if you were alive, let me hear your laughter! And for your own reasons, you remained silent. You remained silent for reasons.

Julia says, “You don’t know that, Barnabas,” which I suppose is probably true. Maybe they should check with the skeleton again. 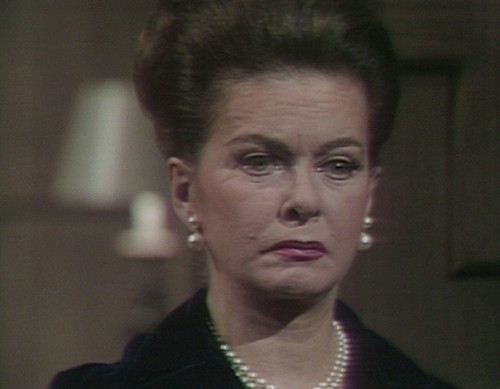 Okay, back to Collinwood, where they’re still letting Liz wander around loose for some reason. But look at that face; I don’t think there’s a way to contain a problem like that.

Determined to reenact Naomi’s last moments, Liz gets a packet of poison out of a desk drawer and spikes her own drink. Why is there poison in the desk? Because it’s Collinwood, that’s why. Don’t ask silly questions.

Barnabas and Julia beat feet back to Collinwood, completing what I think must be their sixth round trip of the day, and they get to the tower room just in time for the poison to take effect. 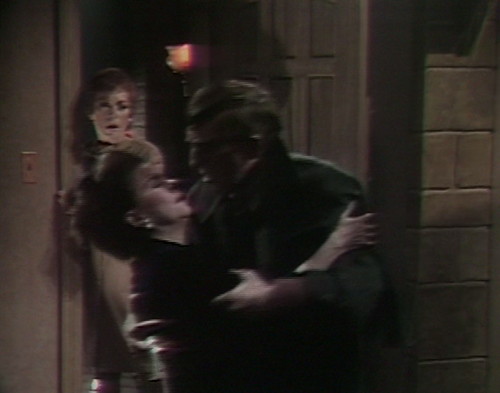 Liz collapses, which makes this the second poisoning on Dark Shadows in two weeks. And that’s how you make half an hour of preposterous television. The end.

In the teaser, Roger steps on Julia’s line.

Roger:  I’ve got this feeling.

Julia:  Perhaps you should —

Roger:  Well, I shan’t bore you with it.

Julia:  — pay attention to the feeling.

Roger:  You think so?

The closing credits get to “music composed by ROBERT COBERT” and then they get stuck. The credits fade away after five seconds, and the theme keeps running over an empty shot of the Old House basement. This goes on for about fifteen seconds, and then a final credit appears for “Dan Curtis Productions, inc.” The copyright date says 1966, instead of 1968.

It’s time for Joan Bennett’s summer vacation — her characters always get institutionalized for one reason or another every year, so she can get a few weeks off. In tomorrow’s episode, Julia tells Roger that Liz has recovered from the poison, but she recommends sending Liz to Windcliff for her own safety. Liz is quietly packed away, and we don’t see her again until late August.

In act 3, Julia appears in consecutive scenes on two different sets, so they have to give Grayson Hall time to get from Collinwood to the Old House. When the Collinwood scene ends, there’s a five-second establishing shot of the Old House, and then the next scene begins with a close-up on Barnabas, doing a twenty-five second monologue. By the time Julia’s supposed to talk, she’s arrived at the Old House set, and they pretend she’s been there the whole time. 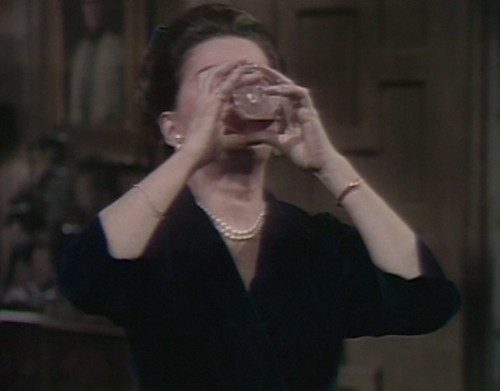