“David, they’re nowhere in the room! They’re dead people! They’re ghosts! And we look exactly like them!” 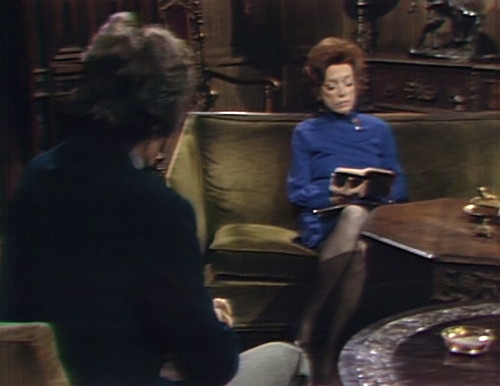 Dr. Julia Hoffman is currently engaged in a literature search for a weeks-long research project on stuff that’s happening upstairs in her own house. She’s been reading her way through the Collins family’s enormous collection of books about themselves, looking for references to Rose Cottage, Gerard Stiles, the Java Queen, and any other phrase that might come up in conversation. She was looking at tax records the other day; I have no idea what that was supposed to achieve.

But Julia knows that there’s a category 5 horological hurricane headed this way, which will destroy the house, scatter the family and set up a supernatural storm surge that will still be felt twenty-five years from now. She will have recently been there herself, touring the wreckage in the far-off space year of 1995. Now that she’s back at home, she’s tearing through the library, desperate to find a clue that could help her un-impend the impending disaster.

Quentin swaggers in and asks what’s cooking, and Julia explains that she’s trying to find a staircase.

“Well,” she explains, “I’m trying to find a mention of it, or something. Something that says something about the staircase that Barnabas and I returned from 1995 on.”

So there you have the current storyline, in a nutshell: the show’s best character is sitting on the couch, flipping pages and hoping to find something that says something.

But at least the second-best character is on the scene, passing the time. Quentin makes an assortment of flippant remarks, ending with, “You and Barnabas do not give up easily, do you?”

It’s adorable; these two are so cute together — not as romantic partners, but as best friends who tease each other. They do several of these Quentin/Julia bonding scenes over the next week, for irony-accentuation purposes.

And then Julia finds something special — a sheet of paper, with an architectural plan for “Proposed Stairway Into Time”. Seriously. That’s going to be a thing now.

They didn’t make a big deal about it at the time, but apparently Barnabas and Julia returned from 1995 to 1970 on a special staircase, which magically appeared and led them to safety. And here’s the plan for it, showing the West Wing corridor, and a little drawing of a staircase with a helpful arrow pointing in the direction of up. That’s all there is to it, apparently.

This is obviously ridiculous, but the paper has some magic words written on it: “Quentin Collins, 1840”. This is Quentin’s great-grand-uncle, an addition to the increasing population of characters named Quentin Collins, which will ultimately span two time periods, two Parallel Times and into the next movie. That’s the nice thing about Quentins; if you lose him, there’ll probably be another one along in a minute.

But if there’s a Quentin involved, there must be something to it; that’s the signal that we’re supposed to pay attention. An Oscar or an Abner can be easily forgotten; they name-dropped “Abner Collins” a couple weeks ago, and nobody even noticed. You can’t do that with a Quentin; they demand our attention.

So then we get into the double-agent scenario, which I’m feeling mixed about. Quentin — original flavor Quentin, not the 1840 one — is currently under the spell of ghost governess Daphne Harridge, who’s been meeting with him in her old room in the abandoned wing of the house, to no avail. She’s one of the things that Julia’s investigating, so Quentin’s actually being obstructive and speed bumpy.

Take the looking-for-the-staircase sequence, for example. Armed with this impossible architectural plan, Julia charges off to the West Wing to find the purported staircase. This leads her to Daphne’s room, which makes Quentin itchy.

“Another bedroom, Julia,” he says, “like so many others.”

She asks, “I wonder whose room it was?”

“Look, I’m sure that there are some more plans downstairs that we haven’t gone through. Why don’t we go back downstairs?”

She just stands there, lost in thought. “We’re looking for a stairway through time,” she mutters.

Quentin raises his voice. “Julia, now listen to me, if you’re going to go rummaging around through every room in this house, we might as well forget about the staircase!” This must be one of those definitions of “rummaging” that involves standing entirely still. And then he grabs her by the upper arm, and pulls.

He’s clearly speedbumping — blocking a story point that might make things more interesting, like Julia finding out about Daphne — and normally that’s against my religion, but that’s why they’re doing the cute Julia/Quentin scenes.

When it’s David and Hallie purposely standing in the way of natural story progression then it’s intolerable, because they’re basically generic children with nothing to offer in the way of entertainment value. But Quentin and Julia are the stars of the show, a title they forcibly wrestled out of the hands of the boring family who used to live on this set.

They have a weird and interesting history, and they’re practically the only people who know all of the absurd and contradictory secrets that they share. This isn’t a relationship based on random proximity; these two really trust each other. So he’s not lying when he says that he wants to help her. He’s actually torn here, between loyalty to his friends versus the hotness of his new hypnocrush.

And they really play that angle, when Daphne summons him for some lilac-scented love. She gets ready for a silent ghost hug, but he refuses.

“What’s happened to my freedom?” he demands. “I know, all you have to do is summon me, and I’ll come. You won’t let me tell Julia and Barnabas about you. Why? Is it because you have something to do with what’s supposed to happen?” These are all good questions.

“I can no longer lie to my friends!” he continues, keeping up his end of this one-way conversation. “One minute I help them, the next I betray them!” And then he tells her to go to hell, and makes for the door.

This is all very exciting, but then, argh, after the commercial break, he walks right back in and kisses her on the mouth. “I should have known I would never get away from you,” he coos. “I’ll never be free. It’s too late for that.”

So like I said, mixed feelings. I kind of dig the double-agent vibe, and the angry ghost lecture was fun, but he was actually just about to do something that would make the story more interesting. If he told Julia about Daphne, that would finally give her something to do besides sit in the drawing room reading books. 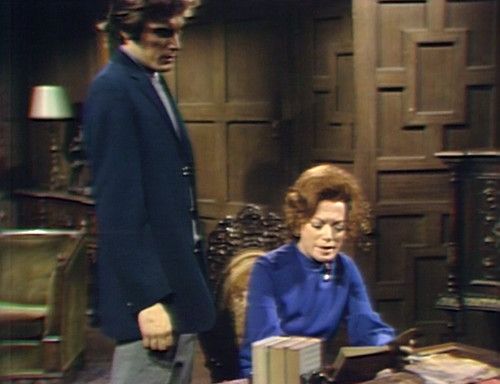 But we do get a plot token for sitting through all that, which is nice. After the kiss, Daphne hands him a journal: “The Thoughts, Words and Deeds of Quentin Collins, Esquire, As Set Down By His Own Hand, 1840.” I guess this is our dimension’s equivalent of The Life and Times of Barnabas Collins.

He hands it over to Julia, who’s impressed. “What a strange man he must have been,” she muses. “Wildly fascinated with the occult, raging against the stars and the universe because he knew they were capable of changing, and that his relationship to them could be quite different.” And yeah, that’s pretty strange, all right. If anyone can squeeze some sense out of that line, I’d appreciate it if you’d let me know.

“Apparently he believed that time was quite fluid, and accessible,” she reads. “He must have been very advanced for his time.” Right, because these days fluid time is commonplace. Look, I don’t know where this is going exactly, but Q40 does sound like an interesting dude. Maybe we could go and look at him for a while?

Monday: A Sense of Something.

Quentin and Julia walk into Daphne’s room, where the burning notebook is smoldering on the desk, and they don’t smell smoke or anything.

Julia asks Quentin if there were no other books or papers, and he says, “No, I don’t think.”

After Daphne gives Quentin the book, you can see the top of the set.

Monday: A Sense of Something. 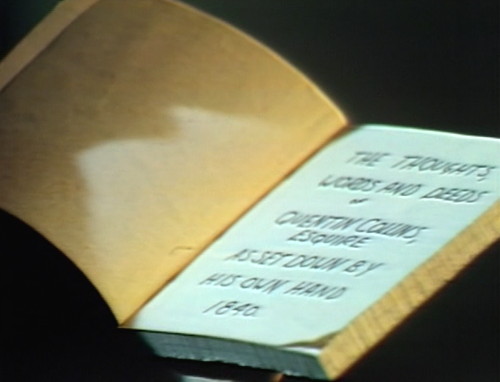