“I don’t want to encourage them, and their ridiculous prophecies.”

There’s a mystery door in the west wing of Collinwood, as I’m sure there is in many of our homes, and when you open it, you either get a linen closet, or a malevolent playroom that eats children. This is an inconvenient way to run a corridor, especially if you just want to put the towels away.

But today, instead of the two usual options, David and Hallie discover a third — a magical stairway into time, operated by ancestors. The ghosts of Tad and Carrie are standing at the top of the phantom staircase, urging their descendants to — well, I’ll let them explain.

“Hurry! Hurry!” they recapitulate, hearkening back to a previous motif. “Please, come! Come! Come with us, please!” This must be what an elevator pitch used to be like, back before there were elevators, and you had to do it on the stairs.

This sequence is a lot like being on the Haunted Mansion ride at Disneyland and getting your car stuck right at the end, when the ghost lady says, “Hurry baa-ack, hurry ba-aaack! Be sure to bring your death certificate” over and over while you just sit there and watch, except that the Dark Shadows version is actually trying to kill me.

Because I am already this tired of the 1970 storyline, and the show has so much more of it to share with me. The kids don’t hurry, as it turns out, so the ghosts just vanish and turn back into a linen closet. There is no further information on what the ghosts wanted them to do, and why they wanted them to do it. They just staged a puzzling Improv Everywhere flash mob, and then disappeared into the crowd.

The kids, at this point, have given up on ever understanding this or doing anything about it. There are some token attempts at resistance coming up over the next week, but on the whole, David and Hallie seem resigned to their fate: they will do what the ghosts tell them to do.

And, honestly? I don’t really know if I even want to stop them. It’s not like they have anything else to do. If they’re not interested in retaining control of their own personalities and wardrobes, then I don’t know how I can help from here. 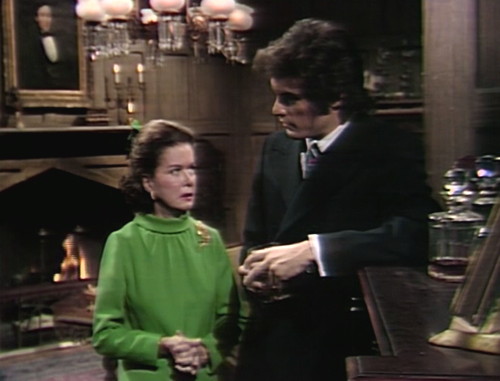 And it’s not like the adults have a better handle on things. Here’s Liz, flip-flopping on warnings from the beyond.

Liz:  Do you know where Julia and Barnabas are?

Quentin:  They’re down at the Old House, poring over papers and books.

Liz:  I didn’t want them to overhear me. I don’t want to encourage them, and their ridiculous prophecies.

Liz:  Oh, nothing very important, but… I must admit, I do feel a sense of something in this house.

Quentin:  But you do feel a presence, or something.

Quentin:  Well, have you seen or heard anything?

Liz:  Quentin, please! Save the ghost stories for Julia and Barnabas!

Well, then what are you talking about, you mad woman? You can’t just go around saying that you have a sense of something, and then snap at people who try to clarify. You need to get your story straight.

It turns out she’s uneasy about today’s horoscope, which says “A loved one is going to meet a stranger.”

“A loved one could be anyone in this house,” she muses. “A stranger… Quentin, you haven’t seen any strangers on the grounds today, have you?” I don’t know why the idea of a stranger is agitating her so much. It’s possible that all of these people need to spend more time outside of the home.

Except the ghosts are expressing opposition to that idea, too. David and Hallie regroup in David’s room, and decide that maybe they’ll consider thinking about making a plan to form a committee to study the feasibility of proposing alternatives to standing around in David’s room and waiting for ghosts to eat them, and as soon as they take a step towards the door, they hear the lock click into place.

David tries the handle. The door is locked. They are trapped in a bedroom.

Within seconds, they’re already acting like they’re cut off from civilization and have to start building a new society. Hallie instantly bursts into tears. David comes up with the wild idea of knocking on the door and calling for someone to let them out, but Hallie says that they can’t possibly do that, because how would they explain who locked them in? I agree that would be awkward, but if the alternative is eating the decor and writing a new constitution, they should probably try the knocking thing and see how it comes out.

It gets so bad in the room that David basically jumps out a third-story window to get away from Hallie. He just climbs onto the latticework and makes a break for it, while she stands by and wails, “David, don’t! David, it’s dangerous! David, let me come with you! David, I don’t want to be alone in this room! David, please! Please don’t go! Please be careful! Please!”

She doesn’t say anything about hurrying or keeping people waiting, but it feels like Hallie and David are basically running on the same platform as Carrie and Tad. I remember the days when you could lock David up in a mausoleum for two weeks, and he’d come out just as determined as ever.

Naturally, as soon as David starts rappelling down the side of the building, Liz hears Hallie crying and unlocks the door. And then they do one of those depressing sequences where a character asks a question that gets at something another character wants to keep secret, and we have to watch them extemporise, like coming up with a decent lie is a heroic endeavor that we all have to be involved with.

Obviously, we know that this isn’t the moment that cracks the whole case wide open, because a) Liz is a secondary character, b) it’s halfway through Monday, and c) locking a door is not even a thing that ghosts do. This is just pointless time-wasting, and I for one am sick of the entire scenario.

Once that blows over, Liz wanders downstairs and finds Quentin reading his great grand-uncle’s diary, and they kid back and forth about that for a while, and then Liz heads back upstairs to make sure that David’s asleep in his bed, which he is.

And then the day is saved, by the most unlikely person. 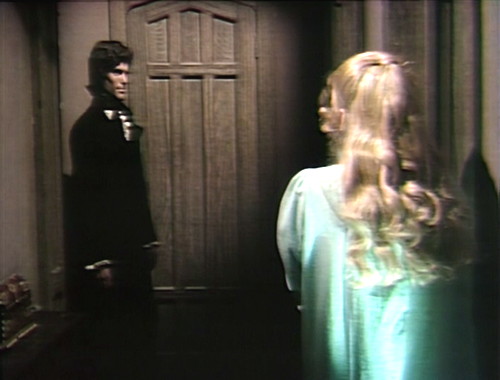 Because Gerard is back! Hooray!

All he does is give David and Hallie a scary dream and then appear in the hallway, but I’m thrilled to see him again. It’s only been a couple of weeks, but I didn’t realize how much I missed him.

Because Gerard does things! He’s the one ghost who actually moves the story along. Daphne hypnokisses people and leaves cryptic notes, and Carrie and Tad just pop in and out of existence to no real purpose, but Gerard drops heavy things on people’s heads, and causes heart attacks. Barnabas and Julia spent two weeks on that 1995 time trip — the highlight of the last six months on the show — and that was basically all Gerard.

And yes, he’s hot; I’ve decided to just go ahead and find him attractive. Maybe it’s Stockholm syndrome, but right now, his face is offering me entertainment value, unlike most of the rest of the show. So that’s the happy ending for today’s episode: the return of my hero, the man that I love: Gerard Stiles. Maybe he’ll kill the kids.

David tells Hallie, “I’m sorry,” and then Liz tells him, “I want you to apologize to Hallie.”

In David’s dream, Q40 says, “Elizabeth, we did all we could,” but the character he’s talking to is presumably Flora.

A reminder: Dark Shadows Every Day readers get 25% off the entire range of Dark Shadows audiobooks when you use the code DSED25OFF. That offer lasts until December 31, 2017, and you can read more about that (including my personal favorites) on my post about The Flip Side.