“The Devil has painted your hair — but still, I recognize you!”

Professor Stokes declared war on the Collins witch two weeks ago, and to be honest with you, it’s not really going that well. He was trying to interrupt the Dream Curse, but Cassandra managed to get it jumpstarted again, and the curse is now a step closer to its final intended victim.

Stokes did score a point when he raised the spirit of Reverend Trask, the 18th century witch hunter who never actually managed to catch a witch. The revenant Reverend tried his best — setting Cassandra ablaze with ghostly fire — but she managed to put the flames out, and move on with her day.

But it’s not a fair fight, really. This war is being waged by “magic”, so the writers do whatever they want. Cassandra can say, “My powers are greater than yours!” but that just means that she has more plot points coming up.

The Dark Shadows audience is clearly okay with having villains stick around for an extended run, so the only way Cassandra can be destroyed is if her schemes become predictable and repetitive, or she gets sidetracked on a pointless B-plot. Fortunately for her, that will never ever happen.

In related news, Cassandra cast a spell on Liz last week that makes her stand around in the drawing room and have gloomy conversations that don’t go anywhere.

“I went to Eagle Hill today,” she says. “It’s lovely there. Quiet. Lonely, I suppose, but there’s such a feeling of peace. I want you to promise me you’ll bury me there.”

Roger is nonplussed, obviously. This kind of thing would nonplus anybody. He asks if Liz is ill.

“I’ve just become aware of how much time has passed,” she says, and I couldn’t agree more. We’re four minutes into the episode already, and we’ve only gotten from the window to the piano. If this keeps up, we could be halfway across the foyer by Tuesday.

So the conversation just drags on, with Liz settling into a series of impenetrable acting faces. This has got to be one of the least gripping witchcraft stories ever filmed. Angelique used to bring the dead to life and turn people into cats. Now, all of her spells involve sending people to sleep, up to and including the audience. 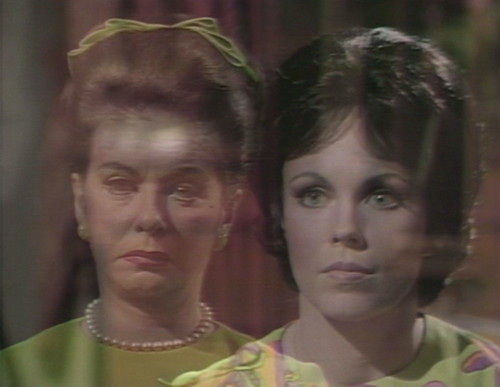 And the crazy thing is that this waste of sorcery apparently requires regular maintenance. There’s a cross-fade to Cassandra, who’s still casting the same spell. “Thoughts of death,” she says. “Only the first step, Mrs. Stoddard, in your last walk. For soon, you will see the world through the eyes of another woman, who lived in another century.” And so on. 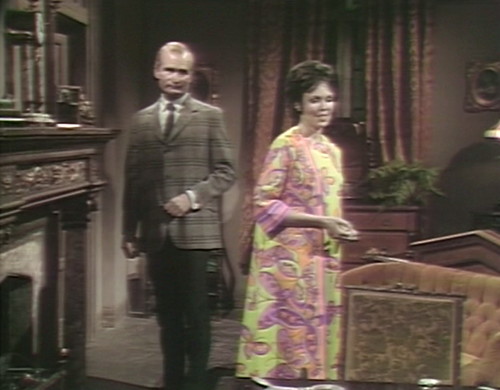 Roger eventually comes upstairs to talk about how worried he is, so now we’re watching that for a while. He invites Cassandra to come to the drawing room to play bridge in half an hour. She agrees to come down, which means that if we hang on long enough, we might get to see a couple rounds of waiting-for-death bridge. 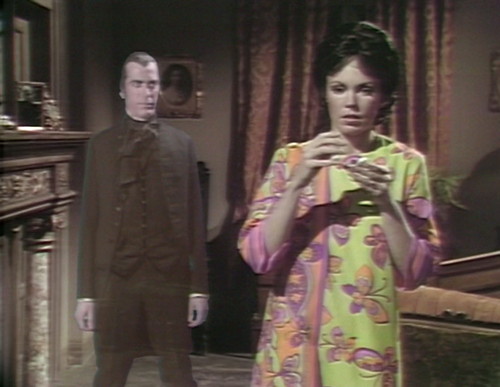 After Roger leaves, she fiddles around with potions for a while, and it really seems like this might just be the whole episode today, just Cassandra and her uninspired sorcery — and then, without warning, a reprieve. Thundering across the plains to our rescue, here comes Reverend Trask, the Chromakey Kid. 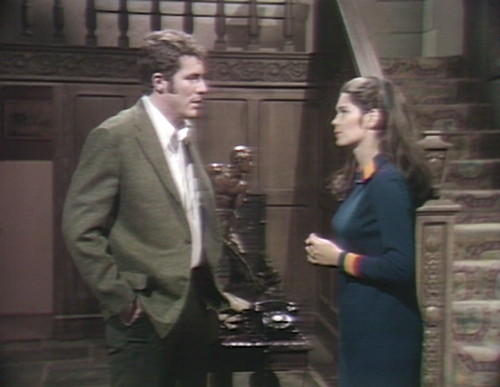 Meanwhile, Joe comes over, looking for Maggie, who’s staying at Collinwood for a while, following her father’s untimely death. He’s feeling guilty that he wasn’t around when Sam was hurt, and Vicki tries to comfort him. It’s a perfectly adequate soap opera scene, with everybody standing around processing their feelings, and Joe even mentions that he’s planning to marry Maggie, which ought to be big news.

But there’s a witch upstairs, and Trask is lurking, and all I can do is wait for the humans to stop yapping at each other so we can do something interesting. Is that wrong of me? I like Joe and Maggie. I’ll be happy for them when they get married. Still, the show’s been training me over the last several months to only pay attention to the kaiju.

So they finally get around to the thing we paid money to see: another ear-shattering confrontation between Cassandra and Reverend Trask.

And here’s how cool he is these days — he just walks right into the drawing room. Yeah, he’s dead. He starved to death while he was chained up behind a brick wall in the basement. I don’t see why that has to be a handicap. He’s like Ben Kenobi; if you strike him down, he becomes shoutier than you could possibly imagine.

He backs her up against the piano, and they perform a two-handed duet of crazy talk.

Cassandra:  Stay away from me!

Trask:  I have come back to right that wrong. The Lord has let me return!

Cassandra:  You’re a ghost! You will disappear.

Trask:  We will see who is stronger — your master, or mine! The eternal battle shall be waged again here, in this house! 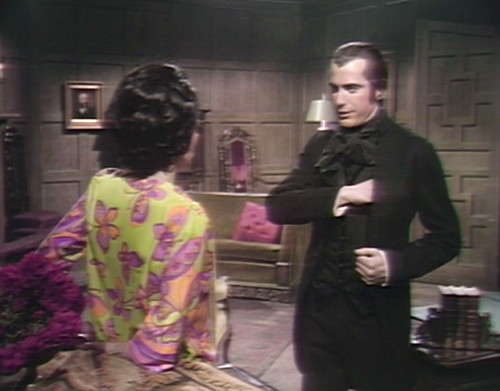 Cassandra, completely losing track of her diction, shouts, “I command you to return to from where you came!”

He just smiles. With the air of a magician completing a card trick, Trask says, “You have Satan’s words, but I have something stronger…”

Cassandra cringes, and collapses. Game, as far as I can tell, over.

So that’s something new for Dark Shadows; I don’t think we’ve seen anything like this before. Reverend Trask, the hollering hypocrite, pulling a cross on a demon and making her beg for mercy. Who allowed that?

In general, this has been one of your more Satan-friendly television shows. Everybody gets a little uncomfortable when you talk too much about a specific religion on a network show, because there’s a lot of religious diversity in America, including many different flavors of Christianity, and they don’t want to risk offending anybody.

But it’s totally okay for a witch to talk about serving Beelzebub, so you end up with a show where the Devil gets name-checked all the time, and nobody talks about Jesus. 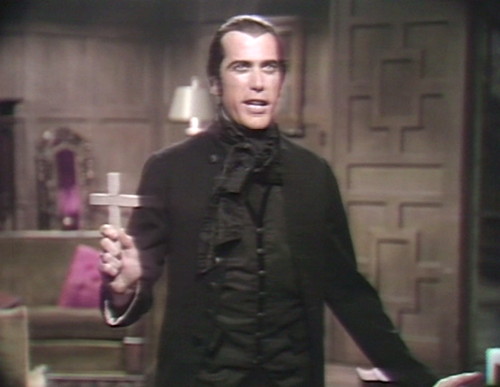 In fact, the only way to get God into the show at all is to turn the priest into a kaiju. I don’t think this trick would work if it was Carolyn or Joe waving a cross around. The cross needs to become a magic talisman. 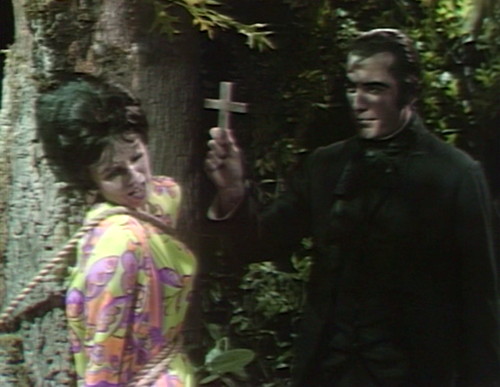 So Trask takes Cassandra out into the woods and ties her to a tree, his old standby. And then we have the whole fourth act — five and a half minutes of daytime television — with the bizarre spectacle of a ghost performing an exorcism.

Here are some high points.

Trask:  I command thee — whoever thou art! — thou unclean spirits which possess her body — to remove yourselves from her presence, and leave her free to become a servant of the true Lord!

Cassandra:  YOU are the Devil! You have the spirit of evil within you!

Trask:  HEAR NOT HER BLASPHEMOUS CRIES! JUDGE NOT BY WHAT SHE SAYS! GIVE ME THE POWER TO STEP UPON THE SERPENTS AND SCORPIONS WHICH INHABIT HER! 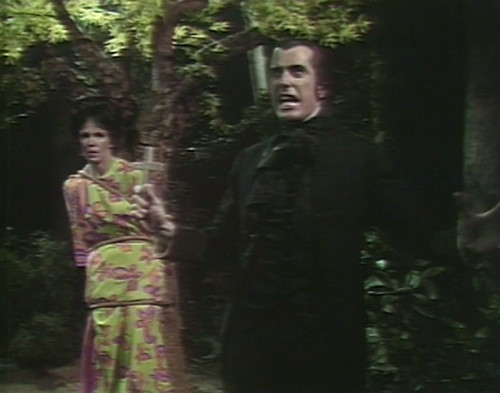 Trask:  I adjure thee, foul serpent — by the judge of the quick and the dead — that thou depart in haste from this unworthy creature, that she may return to the bosom of goodness!

Oh, it’s wonderful. You can tell how powerful he is by how long his run-on sentences run on.

Trask:  Depart from her, ye cursed demons, into the everlasting fire which burns all evil, and leaves only the ashes of what good she once possessed!

And it’s that easy. All you have to do is find someone more powerful — and “more powerful,” obviously, means “more interesting to watch” — and she doesn’t stand a chance.

Monday: What Dead People Do.

At the end of the teaser, Liz gazes out the window and says, “We all eventually die, don’t we? And I know who will be next.” The camera pulls in for a close-up, and it’s obvious that she isn’t quite sure what she’s supposed to say next. Her gaze flickers to the teleprompter, and then shrugs, “I will be next, and it will be soon.”

Coming back after the opening titles, we join Roger’s first line already in progress:

Liz:  I shouldn’t. Death is a perfectly natural thing.

Liz trips over the word “monster” neat the beginning of act 1.

At the end of act 1, the Chromakey ghost of Reverend Trask appears behind Cassandra. As the scene fades to commercial, the camera filming Cassandra moves, which makes it look like Trask is bouncing up and down.

When Liz imagines that she’s addressing Nathan Forbes, she barks, “Don’t play the innocent with me! It might work with Militant, perhaps –”

Trask is bedeviled by a wayward fly during the last moments of Cassandra’s exorcism. When he yells, “Depart from her, ye cursed demons!” the fly lands on his tie. The Reverend continues, “– into the everlasting fire which burns all evil, and leaves only the ashes of what good she once possessed.” At this point, the fly takes wing, and flies into his face. He puffs, to blow it away. “Devils be humbled!” he screams, as the fly bumps into his nose. He shakes his head. “Shrink in fear at the dark night you must shortly see.” The fly — not accustomed to shrinking in fear — settles on his right shoulder for another couple lines. Trask bellows, “Hear me, and go hence from her!” and the fly finally goes hence.

As Cassandra disappears, the audio drops out on two of Trask’s words. You can read his lips to fill in the missing words: “Her spirit is free! [Out, devils!] Go!”

Jerry Lacy is credited as Tony Peterson, instead of Reverend Trask.

Monday: What Dead People Do. 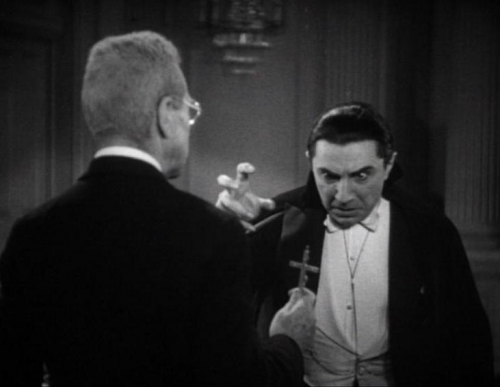