“I promise, no harm will come to you.”

Sproat: Threat, or menace? That is the question on the table.

Ron Sproat is part of the Dark Shadows writing team, and unfortunately, he’s not the good part. He’s the guy who thinks it’s okay to not do anything interesting on Wednesday, so you can save up the plot movement for Friday — and if not this Friday, then maybe next Friday.

Sproat’s other noticeable failing is his obsession with locking women and children up in a room and then just leaving them there. Just in the last year, he’s confined Maggie and Vicki for several months each, plus Josette for a few days and David for a week.

At the moment, we’ve got Adam, our new Frankenstein monster, who’s closed his first official rampage by kidnapping Carolyn and bringing her to an abandoned root cellar somewhere in the woods.

Yesterday, Sam Hall wrote the episode that brought Carolyn to the root cellar, and then who leaves her there for two days? Mr. Ron “I Never Met a Lock I Didn’t Like” Sproat.

So, yeah. Here we are. The root cellar.

Now, the audience knows that Adam isn’t a bad guy. The show has spent the last two and a half weeks establishing that he’s a toddler trapped in a big, clumsy monster body, driven entirely by loneliness, hope and hurt feelings. But his status as a plot driver depends on his capacity to create thrilling chaos, which is a tricky balance to hit.

We’re still expected to see him as a misunderstood innocent, so he needs a good reason to capture and restrain Carolyn. They’ve decided that he’s suddenly fallen in love with her, and — like any awkward adolescent experiencing his first crush — he’s made her fear for her life.

Carolyn is begging her enormous kidnapper for mercy. “Please let me go,” she says, as quiet and calm as she can be. “Whoever you are. No harm will come to you.” And all he can do is wave his hands around, the big sap.

Carolyn sits down on a box, exhausted. He approaches, and touches her face. It’s the standard King Kong playbook.

She cries, “Get away from me!” and rushes to the far wall, doing anything she can to appear small. Once again, Nancy Barrett is defying the victim girl imperative to look sexy in captivity, which I for one appreciate. 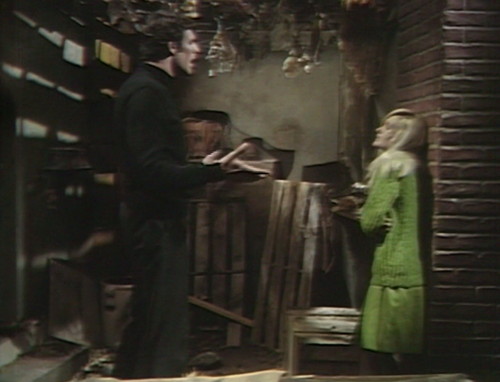 Afraid of triggering another show of force, she explains, “I didn’t mean to startle you. I just didn’t know you were going to touch me like that.” She makes herself as flat against the wall as she possibly can. “You’re not going to hurt me, are you? Please don’t hurt me. Please?” 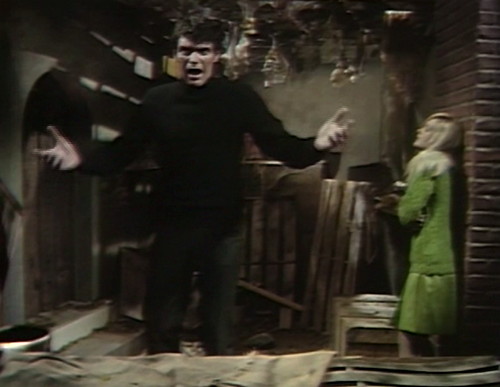 Stymied, he walks around the room, sputtering and trying to communicate. She stays absolutely, perfectly still, tight up against the wall as he pivots around, gesturing at nothing in particular.

It’s not until he turns his head that she lets out the breath she’s been holding, and allows herself a moment to rest.

It’s really a very good performance. Obviously, this isn’t great theater — it’s a cheap, rushed and increasingly weird daytime soap opera — but she is absolutely perfect for the job that she is currently holding.

And then — because this is Dark Shadows, and there’s always something crazy to try, even stuck in the root cellar — Carolyn picks up a big rock.

And she tries to smack him on the head with it. Because Carolyn Stoddard is amazing.

It doesn’t work, obviously, because you can’t just go around bashing plot points in the head like that. They just built this whole root cellar set; there’s no way we’re getting out halfway through the episode.

But I would suggest that it’s this moment — this very second, right here — that Adam stops working as a concept.

I’ve been really enjoying Adam for the last several weeks, because he’s mostly been adorable. For one thing, he’s huge and handsome, and he manhandles things in a way that I personally find rather compelling. But Robert Rodan has also done a good job of using his face and body to show us Adam’s interior journey. Even with just a few scattered words, he’s been the most emotionally coherent character on the show.

But here? I have to say, I have no idea what he’s doing, and it’s pretty clear that Rodan doesn’t either. I mean, I get that he’s supposed to have a crush on Carolyn. Who wouldn’t? Carolyn is phenomenal. But he needs a good reason to keep her locked up in this room all week, and the script isn’t providing him with one.

Desperate for a new escape route, Carolyn tells him that she wants to be his friend. He gets all smiley and says, “Friend!” which is cute.

Then he says “Music!” and “Food!” and I honestly don’t know what he’s trying to do.

Robert Rodan is really trying to make this work, just as hard as Nancy Barrett is. But she has the advantage of playing a character who has a good reason for being here, and he doesn’t.

Then he accidentally knocks her unconscious, like you do. And she even lies on the ground in a Feminine Death Heap, which is disappointing, since they avoided that cliche so efficiently yesterday.

And then he leaves her there, for no particular reason. You’d think that if he has warm feelings for her, he’d stay there and try to revive her. Instead, he says “Food!” and leaves the room.

And on his way out, he puts a heavy rock outside the door, to keep her locked in. It’s not at all clear why he does this, except that this is a Ron Sproat script and I TOLD YOU THIS WOULD HAPPEN.

In the teaser, Julia and Willie talk over each other. Julia says, “That’s it, isn’t it?” as Willie’s saying, “How do you know?”

Julia explains the Dream Curse to Willie, which he already knows all about. He had a long conversation with Barnabas about it last week, in episode 498.

At the end of the episode, Julia tells Willie, “I know what you’re going through, because I went through it. I know what having that dream is life.”

Vince O’Brien returns as Sheriff George Patterson for another five episodes. O’Brien was last seen in the role in September 1967. The Sheriff has also been played by Dana Elcar and Angus Cairns, and there’s a fourth one coming up later. 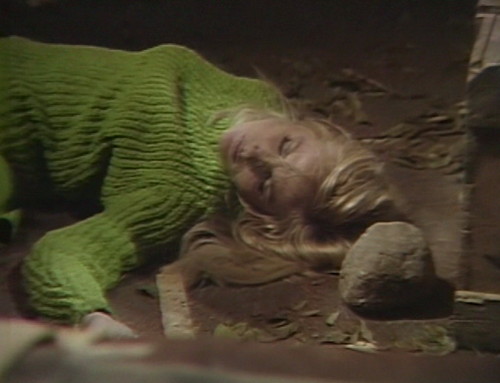