Hey, have I mentioned the Dream Curse yet? There’s this Dream Curse. It’s a spell that Angelique cast about a month ago, and for some reason, it’s still part of my life.

Here’s a quick rundown: Angelique is currently living in Collinwood, posing as Roger’s young wife, Cassandra. Barnabas has recently been released from her vampire curse, and she’s not having it, so she’s decided to bring the curse back to him through the most convoluted possible route. She’s initiated a long series of dreams, which pass from one character to another, and eventually the chain is going to reach Barnabas, and then he’ll die, or turn back into a vampire, or whatever.

This is a slow, grinding disappointment. Back in the 1795 storyline, where she came from, Angelique was the driving force of the entire show, moving people around like puppets, and sending the entire Collins family into a spiral of self-destruction. Now, frankly, she’s just coasting. It’s possible that 1968 is her retirement home. 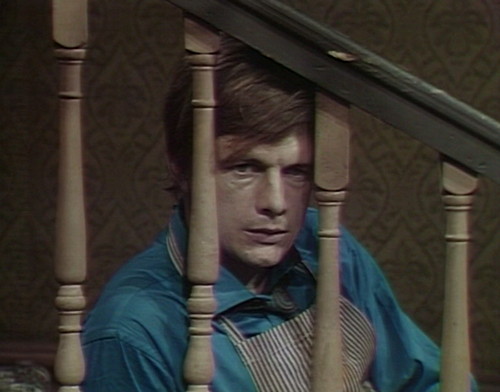 So I keep saying “Here’s the worst thing about the Dream Curse,” but every time I say that, another worst thing comes along. Today, the new worst thing is that the storyline just switches actors to standby.

The episode opens with Willie sitting on the Old House stairs, pretty much refusing to act. There’s a huge scrape in the paint on the bannister, which they haven’t bothered to touch up because we don’t usually see it in close-up like this. It never occurred to them that John Karlen would get so bored that he would just go on strike and let the bannister carry the scene.

This is what the Dream Curse does to people; it makes the audience worry about whether the vampire is going to get his security deposit back.

But I think by now the writers may have realized that people talking endlessly about the same dream is not gripping television. They’ve skipped over the scene of David telling Willie about his dream, which I appreciate. It’s not much, but it’s a step in the right direction. Barnabas’ reaction is appropriately underwhelming.

Willie:  He had it last night, and he told it to me this morning.

Barnabas:  And tonight, you will have the Dream… and I will be one step closer to the Dream.

Barnabas is now the undisputed main character of Dark Shadows — easily surpassing girl governess Victoria Winters, who I think is still on trial in the 18th century. Or something like that. It’s been a while since we’ve seen her.

So they’ve given Barnabas the key to the city, and that means he has a responsibility to get the story moving. He starts talking about Angelique’s magic portrait, which was on display at Collinwood just before she showed up as Cassandra. He tried to burn it, Roger tried to sell it, but it always reappeared on the easel.

Barnabas and Willie proceed to have one of the most Dark Shadows-y conversations ever recorded.

Willie:  Well, what’s a lousy portrait got to do with all these dreams all these people have been having?

Barnabas:  They may have everything to do with them! The portrait is obviously important to her existence in this time. The question is — in which way?

Willie:  Well, who knows? I don’t even understand what you’re sayin’.

Barnabas:  Either she controls the portrait, or the portrait controls her. Or they could be one and the same thing. We must find the answers as soon as possible!

So that’s your premise for the day. This is a traditional bit of Dark Shadows semiotic hocus-pocus, where they assign meaning to a symbol and just expect everyone to go along with it.

This is the essence of magic — conflating the symbol with the thing that’s symbolized, so you can act out a ritual that changes things in the material world. Portraits are always important on Dark Shadows, and if you use them right, sometimes you don’t even have to pay the actor to show up.

So here’s the four words that topple civilizations — Barnabas has a plan. He gets Willie to steal Angelique’s portrait from Collinwood, and then he brings it to Sam Evans.

Sam used to be a painter, before he went into recapping as his full-time profession. We haven’t actually seen him since episode 342, seven months ago, and I haven’t missed him a bit. He hasn’t had a real storyline since pretty much ever; he mostly just worries about his daughter, Maggie, who actually leaves the house and participates in stories sometimes.

Barnabas comes over for a chat. Sam kicks things off with the pants.

Barnabas:  I’m afraid I can’t stay long; I have to get back to the Old House as soon as possible. 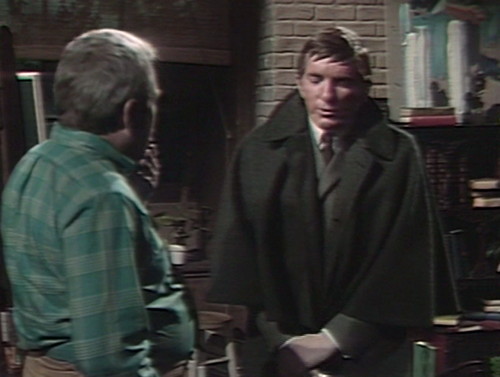 Sam reaches for his chin.

Barnabas:  Well, one that will require you to do what you may consider unusual instructions.

Then it’s back to the pants.

Sam:  Aha. Well, the person doing the commissioning is the boss, so that, uh, doesn’t bother me.

Barnabas says that the work must be completed tonight. Sam keeps a firm grip on the trousers. He says that he’s working on another canvas right now, but Barnabas offers him five hundred dollars. 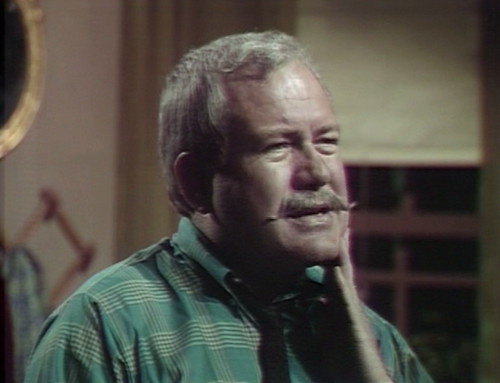 And then it’s back to the face. I could seriously do this for the entire scene; it’s really all that he does. You could play a drinking game based on this, and you wouldn’t recover for weeks.

Anyway, back to the story. Barnabas has brought over Angelique’s portrait, and issues his instructions. It’s a little rough, because neither actor has a super-firm grip on their lines, so they tend to reach for their cues.

Barnabas:  Take this pretty face, and make it as old as you can.

Barnabas:  Yes. Is that possible?

Barnabas:  Then it can be done.

Barnabas wants Sam to make the alterations to the painting in stages, starting with the eyes — and he should use a brush with hard, sharp bristles.

This is an utterly bonkers thing to say, obviously, and that’s why we keep Barnabas around. He’s got that twinkle in his eye that indicates that there’s going to be a certain amount of collateral damage. 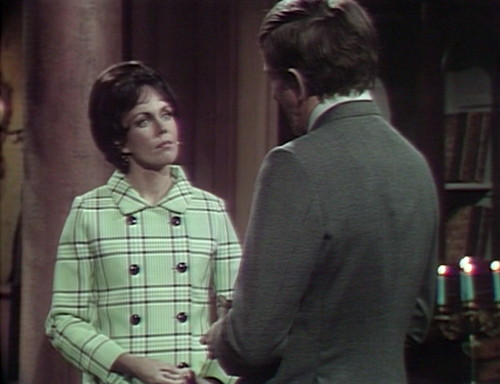 So he invites Cassandra over to the Old House for a one-on-one, and he gives her feedback on her job performance.

Barnabas:  I think you made a mistake, letting it go so long.

Cassandra:  Letting what go so long?

Barnabas:  To kill me, or to put the curse back on me, or whatever it is you intend to do.

Cassandra:  I haven’t the faintest idea what you’re talking about.

Barnabas:  You have the power to get it over with, any time you want. I don’t know why you left it until now.

Yeah, I don’t either. Let’s move things along, shall we?

Cut to Sam, who’s starting on the painting. He’s working now, so obviously he only has one hand free to touch his pants.

And finally, we start getting somewhere. Those hard, sharp bristles must be making a difference, because Cassandra suddenly cries out, and touches her face. 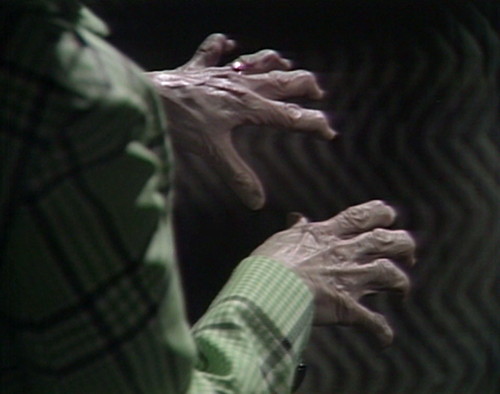 So this is what we’ve been working up to, a nice bit of visual spectacle for tomorrow. We’re still coasting, unfortunately, but at least there’s some interesting scenery.

Barnabas flubs a healthy percentage of his lines today. Here are some samples:

“I knew her coming… back would happen when Vicki bought that portrait.”

“I tried to burn it, and it reappeared on the easel, even as if I hadn’t touched it.”

“When Roger tried to sell it to Professor Strokes, it was gone.”

“The portrait is missing! How forunate — how unfortunate.”

There’s also a loud squeak from the studio as the episode begins, and a ticking clock sound effect starts up too early, in the middle of Barnabas and Cassandra’s Old House scene. Everything’s kind of messy today.

The final shot of Cassandra’s aged hands is a stand-in — Judith Lowry, in her only Dark Shadows appearance. Lowry was born in 1890, which means she was just a little younger than Jamison Collins. She was an undistinguished stage actress who retired in 1921 to raise a family. Nine kids later, she returned to acting at the age of 62.

Lowry had various “Grandmother” and “Old Lady on Park Bench” roles in films like Sweet Charity and The Night They Raided Minsky’s. Being a stand-in for Cassandra’s hands for one shot may have been the most interesting thing she did in 1968.

In 1975, she landed her last memorable role — the mother-in-law on Phyllis, Cloris Leachman’s Mary Tyler Moore spinoff. Lowry died during the show’s second and final season, at the age of 86.