You know, we’ve been spending a lot of time with the monsters lately; we should probably check in with the good guys while we still have some.

Yesterday, Barnabas and Julia murdered Dr. Dave Woodard, because he’d found Julia’s notebook that described her efforts to cure Barnabas of being a vampire. Julia prepared a hypodermic with a drug that would make it look like Woodard had a heart attack. She chickened out at the last minute, but Barnabas jammed the needle into Woodard’s arm, and the doctor died.

This has caused a great deal of inconvenience for everyone, because earlier in the evening, Woodard had called Sheriff Patterson, and made an appointment to share some important evidence. So now the Sheriff is wondering whether Woodard was killed to conceal that evidence.

Naturally, this raises an important question, namely: Why do you need to make an appointment to bring the Sheriff crucial evidence about an unsolved murder and kidnapping? What else was on his schedule today?

Sam was with the Sheriff when he found Woodard’s body, and now he has to tell his daughter what happened. Enter Maggie, wearing an incredibly inappropriate skirt. 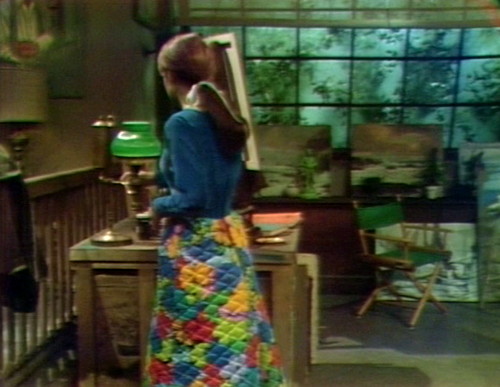 Now, when I say it’s inappropriate, I mean several things. For one thing, this is a fairly grim scene, and that’s not an outfit that expresses “sympathy for your loss in these trying times.” It’s also inappropriate for her age, her body type, her social class, her IQ and her character arc. But most of all, it’s not a good thing to be wearing in a television studio when the cameras are turned on.

So the question is: What does Maggie’s skirt mean?

It can’t mean that she’s glad Woodard is dead, because Sam hasn’t told her yet, and when he does, she seems pretty broken up about it.

Sam:  It just looked like he’d fallen asleep, that’s all… only his eyes were open.

Sam:  A man doesn’t call and make a special appointment to see the Sheriff and then just die by natural causes. He just doesn’t!

I guess I can understand the skepticism. Personally, I don’t have a lot of rules about what people do after they make special appointments, but Sam does, and I have to respect that.

Maggie is uneasy, because they’re still not sure what happened to her while she was abducted. Willie has been blamed for the crime, but Maggie is still unable to remember what happened for all those months.

Sam says, “Listen, I told you not to think about that. You just forget about the whole thing,” which given the circumstances is kind of insensitive.

Sam remembers that he saw Woodard with a little red notebook earlier in the evening, and if it’s gone, then that may be a clue to what happened. Maggie doesn’t want him to go out — she’s scared that her kidnapper might still be at large — but he insists that he has to go.

I don’t blame him; I wouldn’t want to stay in the house with that skirt either. It might go off, and hurt somebody.

Sam goes to Woodard’s office, where he meets a man claiming to be Sheriff Patterson. He’s another recast; this is actually the third Sheriff Patterson we’ve seen in the last three weeks. They’re burning through the cops these days.

I don’t have a lot of good things to say about Patterson’s outfit, either. I know, I’m being super shallow today, but look at those pants. I’m only human.

Anyway, focusing on the fashion is helping to take my mind off the dialogue. There’s nothing that’s particularly bad about it, but this is one of those episodes where people stand around speculating, and the audience is fully aware that they don’t have the essential information that they’d need to figure out whodunit.

These “police futility” episodes are an important staple of the conventional soap opera structure, where a crime is always followed by several weeks of inconclusive law enforcement. This helps to reassure the audience that our society is founded on principles of justice and order, and it also fills up time while the writers figure out what to do next.

The Dark Shadows writing team hasn’t figured out yet that it’s okay to skip the pointless police investigations, and just go on to the next werewolf attack. They’ll get there eventually. 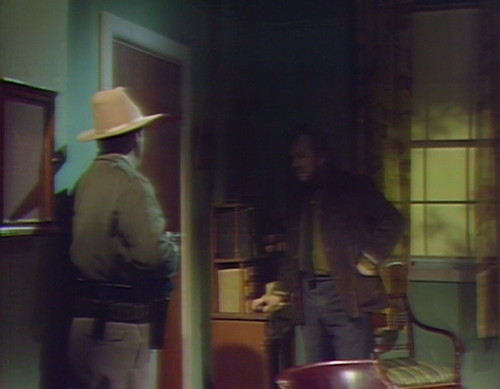 Then we get one of those Dark Shadows moments that’s so breathtakingly incompetent that it makes you wonder how they ever manage to do anything else.

To set the scene, I’m not entirely clear where the hell this is. Sam and the Sheriff are currently standing on the set that represents Dr. Woodard’s office. Previous episodes have established that this room is in the Collinsport Hospital, especially when Maggie was kidnapped from the hospital.

However, in a later episode when Julia brought Maggie to Woodard’s office, they made a point of saying that the office was in Woodard’s house, because they were pretending that Maggie was dead, and she would have been recognized if she was in the hospital.

And in yesterday’s episode, Sheriff Patterson was standing in this room when he picked up the phone and said, “Operator, give me the hospital.” So maybe this really is Dr. Woodard’s house.

Oh, except there’s a sign on the door that says “David Woodard, M.D.” which I don’t think you would have in your own house, and also if it’s his house, then who let them in? But whatever.

Anyway, Patterson and Sam are in this room, wherever it is, and Patterson hears footsteps approaching down the hall. He turns the lights out, and waits as the approaching visitor knocks on the door.

The door opens, and Patterson draws his gun, snapping, “Stand right where you are!” Then he recognizes that it’s Burke, and asks, “What are you doing here?” And he just keeps on pointing the gun at Burke’s midsection.

So, there’s your challenge: Make sense of that scene.

If this is the hospital, then why is Patterson suspicious of somebody walking down the hall? If this is Woodard’s house, then how did Burke get in? And in any case, why does Patterson need to draw his gun, when as far as he knows, this isn’t even a crime scene?

It’s a nice reminder, in the middle of all the supernatural shenanigans, that conventional soap opera scenecraft already exists at a sharp left turn from reality. Compared to this scene, the vampire stuff is practically a documentary.

The ensuing conversation is basically a pageant of Great Moments in Forensic Science, which includes the following statements:

#3.) “Are you trying to tell me that Dave might have died of supernatural causes?”

And while they’re having this conversation, at the window we see the silhouette of a large bat, hovering in place in exactly the way that bats don’t. Nobody in the room notices the bat, so the implication is that Barnabas is eavesdropping on the conversation, in bat form. 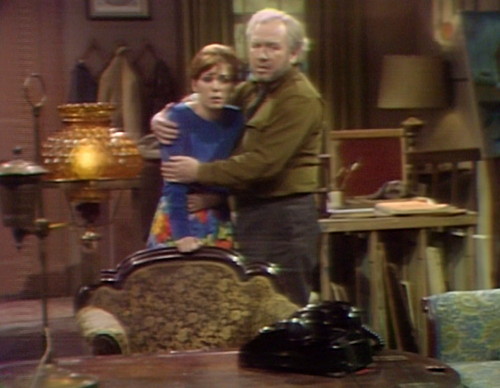 I’m not going to be able to tie all this up, by the way. Some days, I can pull some kind of insight out of the episode, and some days I can’t, and this is one of the can’t days. It just keeps stumbling along, from one scene to the next, with no particular focus.

Once the autopsy is complete, the Sheriff calls Sam and tells him that Dr. Woodard died of a heart attack, and there’s no evidence of anything other than natural causes. Apparently, they didn’t notice that he had a puncture wound in his bicep, but autopsies are funny that way. The end.

Sam has some pronoun trouble in his conversation with Maggie:

Maggie:  Maybe he just put it away.

Also, Sheriff Patterson doesn’t know how to pronounce the word “autopsy” correctly. He puts the stress on the second syllable.

The recast Sheriff Patterson is played by Angus Cairns, who only appeared in two episodes — yesterday’s and today’s. This is Cairns’ only screen credit, but he had a long career on Broadway, playing mostly ensemble and understudy roles, going back to 1938.

This is the last time we see Sheriff Patterson for seven months — he’ll appear next in episode 505, in late May 1968. At that point, he’ll be played by Vince O’Brien, who we saw filling in as Patterson a few weeks ago, in episode 328. 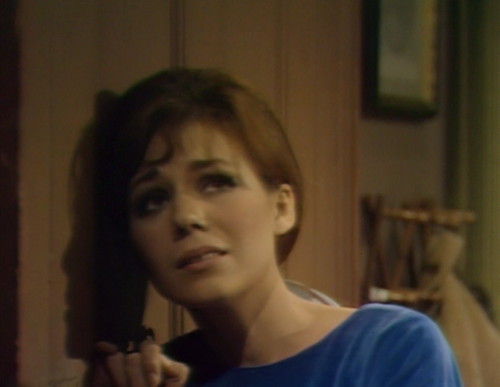