“Why wouldn’t you let me bury them in the earth?”

As we open a new week on Dark Shadows, Joshua comes home from a business trip and finds Naomi in the drawing room, hip-deep in sherry.

He responds as he always does, with bitter sarcasm. “Well, I’m happy to see you up and busy at such an early hour,” he growls. “This was well worth the whole night’s journey, to be welcomed by this charming bit of domesticity.”

Naomi looks off into the distance.

“A little bird flew to the window,” she says, so apparently it’s going to be one of those conversations. “It hovered there for a moment, and then flew away. The first bird of the morning.”

This newsflash from the aviary is Naomi’s way of leading up to the breaking news story — on Friday, their little daughter Sarah died of pneumonia.

Wait, Sarah’s dead? God damn it, did somebody let her get outside again? We have got to start locking the front door, and this time I mean it. 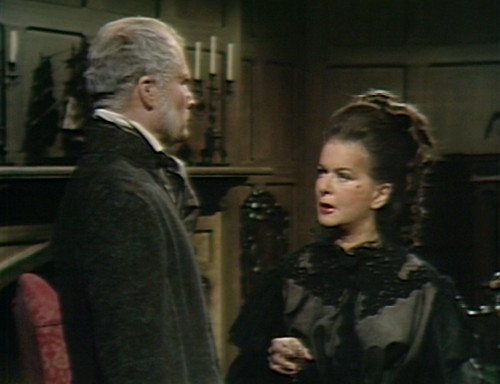 Yes, it’s been over a week since the last Collins family funeral, so here we are again. Luckily, they’ve been getting lots of practice; they should be amazing at it by now.

Joshua’s stunned, but Naomi has been up all night, practicing her grieving-mother performance art piece.

Naomi:  Yes! That’s what we must do — not believe it! Pretend it never happened.

Joshua:  No, that’s not what I meant.

Naomi:  We must call her — Sarah! Sarah! — she’ll come running down the stairs, laughing, through the doors, into my arms.

I have no idea what stage of grief this is supposed to be. What is it again? Denial, Anger, Bargaining, Cat on a Hot Tin Roof monologue? 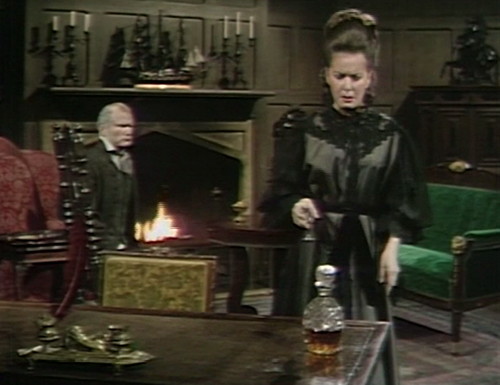 Naomi makes a beeline for the bottle, acting all the way.

Joshua:  If I had known, I would have been here.

Naomi:  Why would you have been here?

Joshua:  She was my daughter!

Naomi:  Daughter! Son! Wife! What do they mean to you?

It’s fantastic. You can’t blame her for playing to the balcony today; you don’t get a theatrical moment like this every day. You’d run out of daughters.

So Joshua decides to go out and have an emotional scene of his own. He’s convinced that Vicki is the witch who’s put a curse on his family.

And hey, they have a new prison cell set, which means Vicki probably won’t be getting sprung any time soon. They have to hold pretty tight on the close-ups in this scene, because the cell only has bars on one side.

Also, the wall behind her has a regular glass window with no bars, and a big brass candlestick right in front of it. It might as well have a sign that says “In case of guilty verdict, break glass”. I guess the Collinsport Gaol runs on the honor system.

This would probably be a good time for Vicki to come up with something new to say that might help to clear her name, because her current strategy of denying everything and then telling people that she comes from the future has not been the blockbuster success that she apparently expects. It’s not like she has anything else to do with her time; can’t she ask Peter for some easel paper and do a brainstorming exercise?

But no. She goes to her old standby — “But I’m not a witch!” — and then she tells him that she comes from the future. She doesn’t say her catchphrase, “You’ve got to believe me!”, but I bet she’s thinking it the whole time.

Joshua gets a nice theatrical moment of his own, asking Vicki if she likes to watch the sunrise.

Joshua:  If the sight of a sunrise is of special pleasure to you, I suggest that you rise early in the morning. Enjoy your beloved sunrises, and your glorious sunsets. There will be few left for you to see, I will see to that. And perhaps, as you gaze at the streaks of red blazing in the sky, you can contemplate not only the fires of Hell to which you will surely be damned — but the fires of this earth — the death of witches — that will take you to the fires of the next!

Which is obviously a crazy thing to say, the kind of line that only happens on Dark Shadows. By the way, do you think random citizens have to make appointments to threaten the defendant, or is it entirely on a walk-in basis?

Then it’s over to Barnabas’ hiding place in the Collins family mausoleum, for another gloomy interview with the vampire. The whole episode is like this.

Barnabas considers himself responsible for his sister’s death, which is only partly true but it’s nice to see him taking responsibility for something around here.

He doesn’t want Vicki to be blamed for Sarah’s death, and he strikes a vaguely noble pose. “Perhaps I should give myself up as the real murderer,” he says, adopting a pained expression. “I cannot allow Miss Winters to suffer in my stead!” 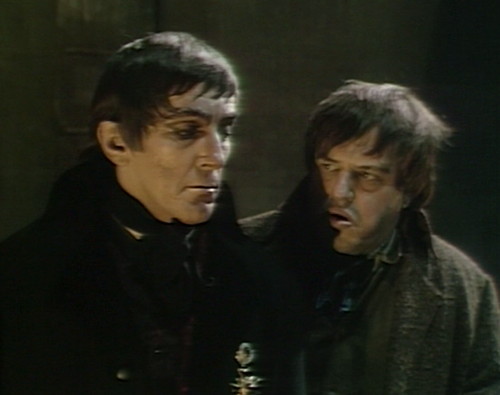 Ben tries to talk him out of this idea, as Barnabas stands there and employs a range of acting faces. This is a great scene if you like acting faces, and I do.

Part of the visual impact here is due to the undead eye makeup that they’ve started using since Barnabas rose as a vampire last week. They weren’t doing this back in 1967, before the time travel storyline; it’s a new innovation in vampire cosmetics. I love it. It makes every facial expression look spooky and important.

Here’s another great acting face. They’re not going to come up with anything that matters plotwise — this is one of those episodes where everybody talks themselves in and out of things — so we might as well just turn the sound down and focus on the facial expressions.

Then Naomi and Joshua pay a visit to the mausoleum, which is getting a real workout these days. Soap operas usually have a public meeting spot — a diner, a bar, a hotel lobby — where characters can run into each other and recap their storylines. On Dark Shadows, the hot new nightspot is the family crypt. 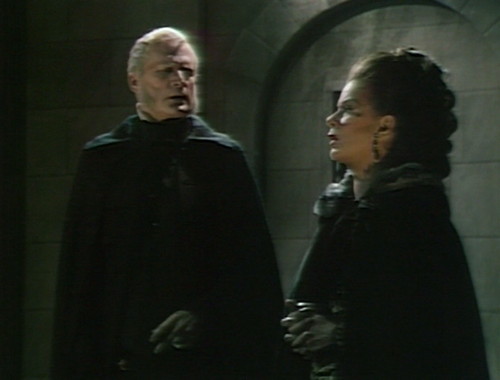 Barnabas and Ben listen at the secret room door as Naomi treats the funeral like a family therapy session, telling Joshua all the things that she doesn’t like about him. This doesn’t solve anything, but it’s probably nice to get it off her chest. 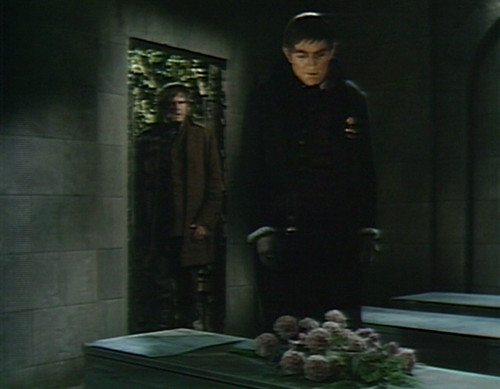 Once the parents have cleared the room, we have yet another gloomy conversation about how much Barnabas wants to die.

This is popular afternoon television, by the way. By this point, the show is on a ratings upswing that will continue for the next two years.

So this is apparently what the viewing public of 1968 wanted — people standing around in drafty stone buildings, talking about how much they envy the sleeping dead.

Everything else in American pop culture is getting louder and brighter — Big Brother and the Holding Company, tie-dyed shirts and Laugh-In — except on Dark Shadows, where it’s jail cells, gray stone and the quiet of the grave.

And here’s how we end this rollicking half-hour of high adventure and romance.

Barnabas:  Go now, and come back at dawn. But during the night, you must do me some service.

Ben:  Whatever you say.

Barnabas:  Find a branch of a tree — a holly tree — and from it, fashion a pointed stake. Make it of such a length that it will pierce through a man’s heart.

Barnabas:  You will do as I say!

Ben:  But it’ll destroy ya, forever!

Barnabas:  I am already destroyed. What you will do is to save me from an eternity of agony. If you are my friend —

Barnabas:  Then do it. 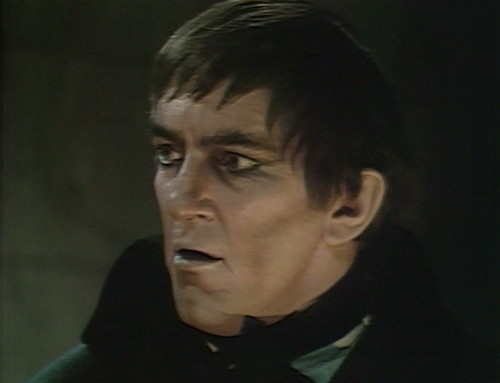 And Jonathan Frid just one-hundred percent goes for it. He’s decided that he’s going to deliver one of the great dramatic vampire-suicide scenes of all time.

Barnabas:  Free me! Bring me peace at last!

The acting faces are just going mad at this point.

Barnabas:  Let me join those who are at rest. 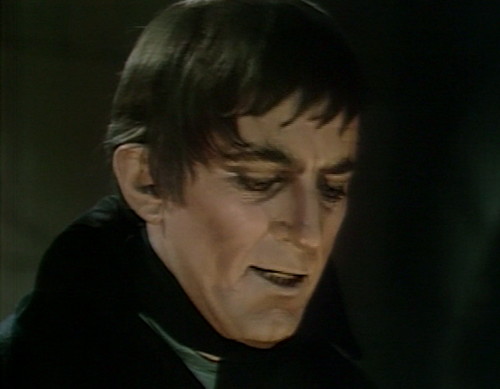 Barnabas:  Do not condemn me to wander forever in endless agony. Give me to the waiting arms of the sleeping dead. 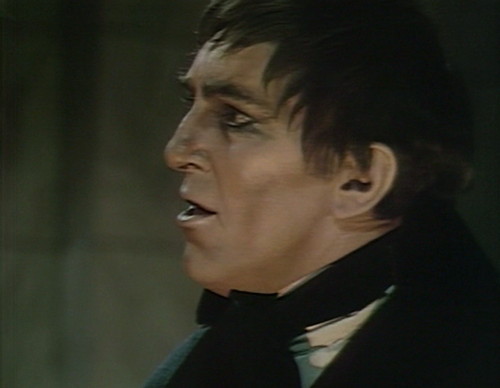 Barnabas:  End my torment! Please, I beg you. I beg you!

He looks up at the ceiling.

So the cliffhanger of today’s episode is that the psychopath vampire has talked his friend into some timber-assisted suicide. It’s really quite extraordinary. I have no idea what the audience was supposed to make of this, but I’m going to tune in tomorrow to see what happens next. How could you not?

Joshua has a hard time getting his mind around a line in the first act:

Naomi:  I can’t explain. And you wouldn’t believe me, even if I tried.

Joshua:  Of course I wouldn’t. I’m sure your inventions would be even less than imaginative than Miss Winters’.

At the end of the first act, as Naomi pours some more sherry, the camera peeks into the shot at the left side of the screen.

Also, they haven’t really figured out Sarah’s birth and death dates. When we saw Sarah’s plaque back in episode 276, it said 1786 to 1796. But that would make her ten years old when she died, and last week, in episode 413, Vicki said that Sarah would die on her 11th birthday, on January 26th.