“You see? I can be merciful. But next time, I will show you no mercy.”

Look out, everybody; Angelique’s mad at a toy again.

Yesterday, she thought she was making progress in her relationship with Barnabas, and by progress I mean they were kissing in a fairly serious way.

Barnabas promised to come to Angelique’s room later, but then he had kind of an emotional conversation with Josette, and all of a sudden, the relationship status updated again.

So Angelique is disappointed, and when she’s upset, she tends to say it with voodoo. Now she’s got Sarah’s doll, a handful of pins and a bottomless white-hot fury. You know, the Collins family really needs to stop leaving toys lying around; this is what happens.

So you remember how we met Sarah as a nine-year-old ghost? That means she must have died at around the age that she is right now.

This isn’t actually the incident that bumps her off, but it’s the moment when you realize that being related to Barnabas Collins is a high-risk occupation.

A couple of pins go into the voodoo doll, and Sarah cries out in pain.

And look how happy Angelique is! She’s having the time of her life right now, just jamming pins into a nine-year-old. The question of “is Angelique sympathetic” is pretty much permanently off the table as an option.

Yes, it’s upsetting when you get mixed signals from a guy. Torturing his little sister is not an acceptable response.

On the other hand, it does get his attention. Sarah is Barnabas’ favorite relative that he hasn’t shot in the face yet, so obviously he’s going to be concerned.

Sarah wants her doll, Samantha, so Barnabas leaves the room to look around for it.

Barnabas bumps into Ben in the hall, and fills him in on the news from the sickroom. This is an opportunity for a nice close-up on Ben, and some anguished thinks.

He’s become Angelique’s mostly-unwilling henchman over the last few weeks, so he’s got  a leg up on solving the mystery.

Ben (thinks):  I know who did this. It was her, it was that Angelique! This time, she’s gone too far. She’s gotta make Miss Sarah well again… or I’ll kill her!

Which is gorgeous. Thinks is a relatively recent invention on Dark Shadows; they only started using it about six months ago, and it’s still not as omnipresent as it will be later on. But this is why we have thinks, for awesome little monologues like this.

Ben knows that Angelique must be sticking pins into dolls again, so he goes to her room and starts rummaging around. They don’t make a big deal about it, but this is actually a very brave thing to do. He knows that Angelique has a magical hold on him, and there are several different varieties of mayhem that she could commit at any time.

But here he is, putting himself on the firing line to save Sarah. I guess my point is that I really like Ben a lot.

But obviously, we can’t let him go around turning off plot points, so Angelique arrives in time to catch him. This isn’t going to look good on his annual performance evaluation.

He tells her that he knows she’s responsible for Sarah’s illness: “You made it happen! You worked one of your spells on her!”

“Did I?” she says, with a twinkle in her eye. This may be her most openly psychopathic moment in the series.

Ben tries to talk sense to her. It doesn’t go amazing. She turns on the crazyface.

Ben:  That little girl, she never did anythin’ to you. Why are you doin’ this to her?

Angelique:  I want Barnabas to suffer. I want him to come to me willing to do anything to make Sarah well again!

Ben:  You are a witch. No wonder Mr. Barnabas don’t want ya!

Angelique:  He will want me, Ben. In time.

Angelique:  He’ll never know. Besides, I may decide to let Sarah live. 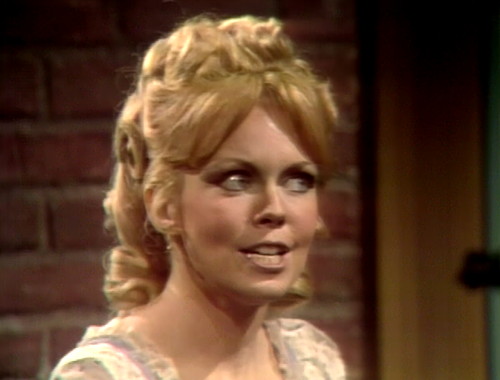 So this is a great example of what’s broken about Angelique. Everything that she does is apparently in pursuit of love, but she really doesn’t understand how love works, on a fundamental level. She thinks this is how you go about getting it.

So here’s part two of her cunning plan. Barnabas tells her that Sarah is ill, and the doctor doesn’t know what they can do.

Angelique says that she had a similar illness when she was a child, and her mother brewed a special herb tea that took the pain away. She offers to brew the tea for Sarah. 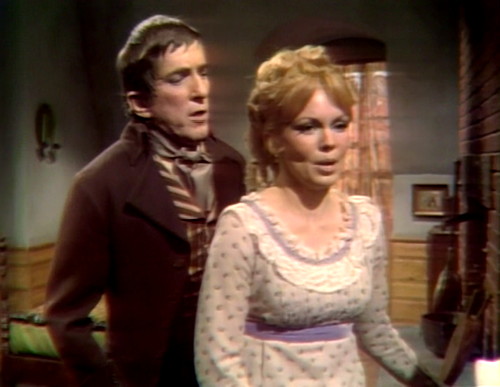 And then she does this.

Angelique:  If I should cure Sarah, you would be very grateful to me, would you not?

Barnabas:  I’d be indebted to you for the rest of my life.

Angelique:  There is one way in which you could repay that debt.

Barnabas:  I’d give you anything you want.

Angelique:  There is one thing I want more than anything in the world.

Barnabas:  If you’re able to cure Sarah, I’d give it to you. 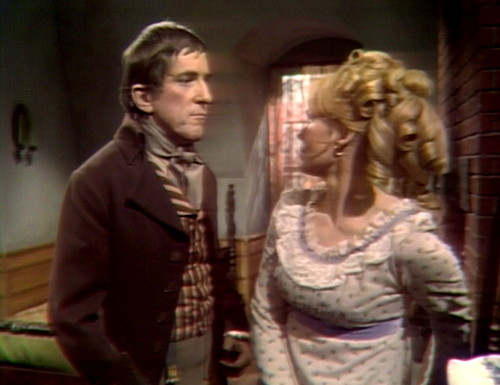 Angelique:  I want you to make me your wife.

Angelique:  Yes. If I should cure Sarah, that is the payment I would ask.

And he agrees. That’s how crazy his life is these days; saying yes to this bargain actually makes sense to him.

Now, you might recall that a couple of weeks ago, Angelique said the following:

Either Angelique’s getting a lot more desperate, or the guy who wrote today’s script doesn’t fully understand how Angelique works. We’ll get more information on that question tomorrow.

The teaser cuts off Naomi’s last line, as she’s calling for Barnabas.

When Ben is searching Angelique’s room, somebody in the studio coughs. This has been a problem all week.

You can see a time-traveling Raggedy Ann doll on the toy shelf in Sarah’s room. The first Raggedy Ann doll was produced in 1915. (We’ll see that doll again at Windcliff for Amy Jennings’ introduction, in November 1968.)