Okay, back to the writers’ room. Ever since we started this uncertain and frightening journey into the past, almost all of the episodes have been written by Sam Hall and Gordon Russell. I talked the other day about Russell’s recent game-upping, and obviously Hall is beautiful and perfect, so the show has been, on the whole, amazing.

And then along comes Ron Sproat, who’s my third favorite out of three.

Sproat wrote yesterday’s episode, in which the evil witch-vixen Angelique tortured a nine-year-old girl, in order to trick Barnabas into agreeing to marry her.

Now, I don’t specifically have a problem with kid-in-peril storylines, because what’s the use of even having kids on the show if you’re not going to send them out to play in traffic once in a while.

The thing I take issue with is the “I’ll cure Sarah if you marry me” scheme, because Angelique is supposed to be cooler than that. A couple weeks ago, she told Ben that she’d never cast a spell to make Barnabas love her, because he needs to come to her of his own free will. She wants the realness.

So what’s the point of tricking him into marriage when he’s desperate to save his sister’s life? That wasn’t the romantic proposal she’s been dreaming of. Something is wrong with Angelique right now, and I blame Sproat.

One of the problems with Sproat’s scripts is that his dialogue is functional rather than decorative. There are a lot of moments where the characters say things that any other character would say in that situation, and they become interchangeable.

For example, here we are in Jeremiah’s room, watching him die. Jeremiah was shot in a duel the other day, and the outlook isn’t good. At the time, it didn’t look like he was shot in the face, but now his head is completely wrapped in bandages, so I guess maybe he was, unless he’s taken the opportunity to get some elective plastic surgery.

Andre:  Why don’t you go to your room, and rest for a while?

Naomi:  Your father’s right, Josette. You can’t do anything for Jeremiah. You’ve been sitting here for hours, you must be tired.

Andre:  We’ll let you know if there’s any change.

Josette:  Jeremiah’s dying because of me. I won’t leave him.

You see what I mean about the functional dialogue? Naomi and Andre could trade lines and it would make no difference at all.

Then she feels a chill. People are always announcing they feel a chill in Ron Sproat scripts. She says it’s a premonition; Jeremiah’s going to die tonight. Why he’s decided to indicate that by creating a localized weather pattern around Josette is left up to the audience to interpret.

So Andre goes downstairs to tell Barnabas that Josette thinks Jeremiah is going to die.

Barnabas registers surprise, saying, “According to the doctor, he showed signs of improvement!” Because doctors are always optimistic about patients who have been shot in the head.

Andre continues, “What frightens me most is she isn’t crying, or hysterical — she’s just quiet. Altogether too quiet, as if she’s mourning for a man who’s already died. As if she feels that she’s responsible for his death.” 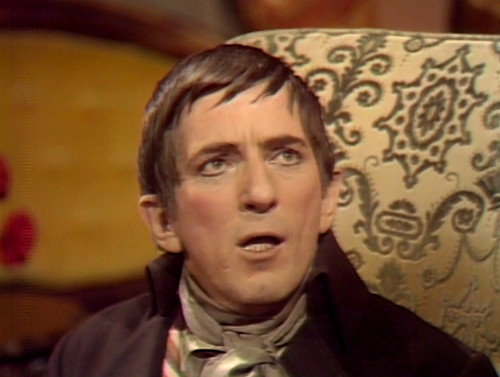 Barnabas:  Why should she feel responsible? I was the one that challenged him to a duel; I shot him. His blood is on my hands, not hers.

Andre:  Yes, but she was the cause of the duel. If she believes that she killed him, she won’t live past that guilt for the rest of her life… unless you pity her. I mean, her only crime was that she was in love with Jeremiah, and not you.

Barnabas:  Perhaps it was.

Andre:  Well, if you went to her and told her that, just told her that she wasn’t involved in any way, and that she’s not to blame. 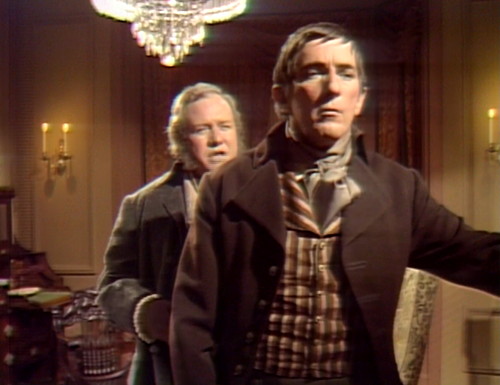 Which is just annoying. Everything is annoying me today.

Barnabas:  Perhaps Jeremiah will recover, and he and Josette will live very happily.

Andre:  I pray it will happen. Maybe some good should come out of all this.

Barnabas:  Yes. Someone in this house will be happy…

That’s a nice sentiment, but maybe you should have thought of that before you shot Jeremiah in the face. I bet he was planning to use that face for something.

But if you want to see happy people in the house, then here comes Angelique, reporting that Sarah is recovering nicely from her voodoo-inflicted illness.

Angelique settles herself at Barnabas’ feet, and asks when he’s planning to tell Josette about their upcoming marriage.

Angelique:  It will come as a surprise to her. But then I suppose it will surprise everyone. There will be those who will tell you that I’m not worthy of you. Perhaps they are right.

Angelique:  I will try to be worthy of you, Barnabas. I will do everything in my power to make you a good wife. You do know that, don’t you? 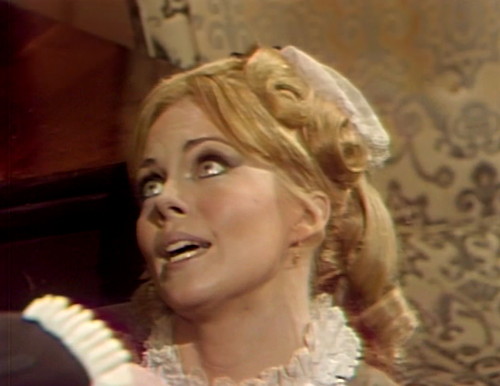 She completely misinterprets his obvious lack of excitement.

Angelique:  What is it? Do you doubt my love for you?

Angelique:  You must never doubt it, because I do love you. More than anything in the world, I want to make you happy. 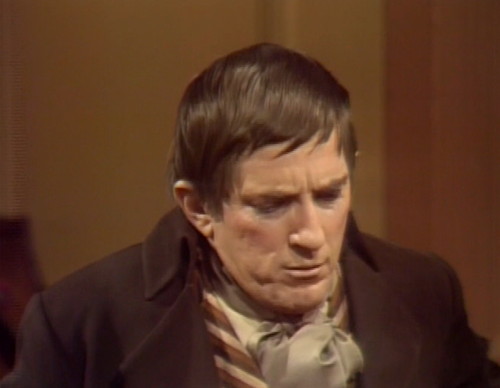 Things get a little awkward.

Angelique:  What is it? Why do you look so troubled?

Barnabas:  We never spoke of marriage.

Angelique:  But we did, this afternoon! You told me you would make me your wife if I was able to cure Sarah. And Sarah has recovered.

Barnabas:  I thought Sarah was going to die, I was desperate. 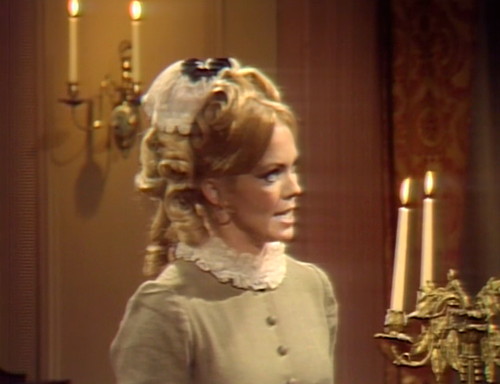 Angelique:  Is that why you agreed to marry me?

Barnabas:  I didn’t say that.

Angelique:  No, but you implied it. 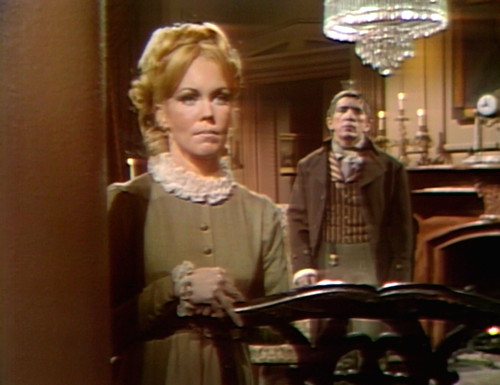 She walks to the other side of the room for some passive-aggressive backacting.

Angelique:  You promised to marry me if I saved Sarah’s life. I did, and now you want to go back on your promise. Apparently, you do not want to marry me, and so I release you from your promise.

Angelique:  Forget everything that was said. I’m glad that Sarah has recovered. I didn’t cure her to force you into a marriage that you obviously do not want.

Now, I hate to say this, because I love Angelique, as a character and a chaos engine, but this plot point just doesn’t work at all. She’s specifically trying to pressure him into living up to his marriage proposal. Again, what’s the difference between that and casting a spell on him? Saying “I don’t want to force you” is the thing that you say when you want to force somebody.

Angelique should be in control of her own emotions. That’s part of what makes her so much fun to watch — that she can get inside other people’s heads, as she did during Reverend Trask’s interrogation on Tuesday. 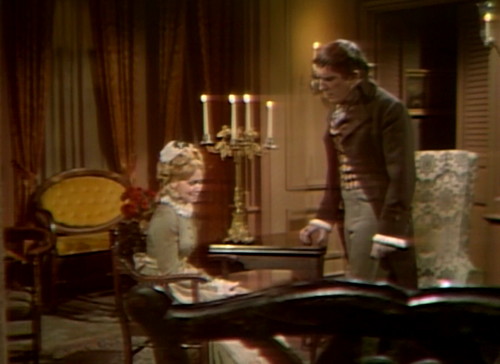 But Sproat doesn’t really get Angelique — and in her early days, occasionally Lara Parker doesn’t either.

There’s a great quote from Parker in a 1991 People interview (quoted in Craig Hamrick’s book Barnabas & Company): “I was just a young, naive actress who wanted to play the lead. I had to be the princess. I wanted to cry when things went wrong. They kept pulling me aside and saying, ‘Honey, you’re the heavy. Don’t cry. Think vicious.'”

She absolutely nails vicious in the scenes where she’s being explicitly vicious, but today, Sproat’s script is encouraging her to play the princess. 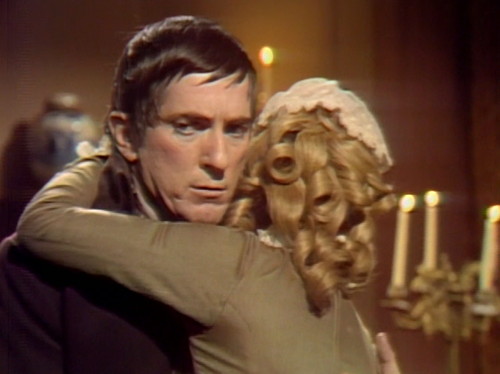 So obviously, by the end of the scene, they end up here. But where does here get us?

David Ford is in this episode, so obviously the dialogue is a little bumpy. There’s one point in his first scene with Barnabas when he delivers a full minute of dialogue while looking back and forth between Barnabas and the camera.

In Jeremiah’s room, Barnabas asks Andre, “How is he?” Andre’s response: “Very loam.” I swear this is what he says.

Angelique:  Did you speak to Josette?

Angelique:  Why not? You said you were going to.

Barnabas:  Yes, and I will. Tomorrow, perhaps.

Jeremiah’s ghost appears by Josette’s bedside, through the magic of Chromakey. They don’t quite get the matching right, so it looks like Jeremiah is about four and a half feet tall.

This isn’t a blooper, just an amusing moment: Jeremiah’s ghost opens the door when he leaves Josette’s room.

Today’s episode gets a double number, because the show is pre-empted on Monday for Christmas. Whenever they skipped a day, they’d give an episode a double number, so they can keep the numbers consistent.

Timothy Gordon is subbing in for Anthony George for the next seven episodes, as Jeremiah’s body/ghost. His face is completely covered in bandages, a trick that Ed Wood used when Bela Lugosi died in the middle of shooting Plan 9 From Outer Space. We previously saw Gordon as a Blue Whale customer, and he played Barnabas’ hand when it came out of the coffin to strangle Willie in episode 210. We’ll see his hand again in the future — he plays Barnabas’ hand in a vision, and Count Petofi’s hand in the 1897 storyline. In 1795, he also plays a minister, and a spectator at a hanging.

As the series went on, the excitable teenage fans started idolizing every actor who appeared on the show, including day players like Gordon. Barnabas & Company quotes from an amusing response to a fan letter in February 1970:

“‘I more than yearn to be on the show more than I am, and it takes wonderful people like yourself to get me there — the producers are a little thick in the head sometimes, so write to them.’ (He provided names and an address.) ‘Get all your friends to write — the more the better, and you will get me back on. It is folks like you who make the stars.’

“He mentioned his fan club was aptly named ‘The Timothy Gordon, Ghost of Jeremiah Fan Club’ and was based in Salem, New Hampshire.” 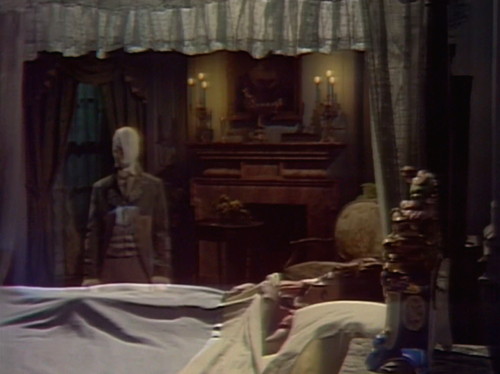