“I did not change Mr. Collins into a cat so that you could kill him!”

Dearly beloved, I have a question: Why do they even bother to send out Save the Date cards? It’s a soap opera wedding; they have to know that it’s not going to go as planned.

The bride calls the groom by the wrong name at the altar, and they call it off. Or the groom’s sister goes into labor during the ceremony.  Or the bride shows up two hours late. Or the groom doesn’t show up at all. Or the bride’s ex-boyfriend runs in and punches the groom in the face.

Or the groom’s mother drives her car through the wall and straight into the church. Or the groom’s ex crashes the wedding on a horse. Or a dog runs in and identifies the bride as a mental patient who’s had plastic surgery to impersonate the real bride.

Or somebody plays a sex tape during the ceremony showing the bride having sex with the priest. Or the groom’s wife travels back in time from the future just as he’s about to marry her 1888 lookalike. Or the bride is kidnapped by gangsters dressed as nuns.

It’s even possible that the bride’s maid is secretly a witch who’s in love with the groom, and she pins a flower doused with love potion on the bride’s dress. And then the spell-charmed bride runs off into the night with the groom’s uncle.

I mean, one way or another, it’s just not going to work out. Look, some of us still believe in tradition.

When Josette asks Angelique to leave her room, she says, “Natalie, would you tell Mr. Barnabas that I’ve been detained?”

Impatient for Josette to come down, Andre asks Natalie, “Shall I go up now? Stairs?”

Andre calls through the closed door: “Josette? It’s twenty minutes after nine. The patient — the minister is becoming very impatient.”

Paul Kirk Giles plays Reverend Brook in this episode; it’s his first appearance on Dark Shadows. He’ll be back in January, playing a different reverend for some reason.

Idly chatting with the reverend in the drawing room, Natalie mentions Andre’s wife, Marie du Prés. Marie was never seen in the series, but she recently made an appearance in the 2011 Big Finish audio drama The Crimson Pearl, played by Kathryn Leigh Scott. 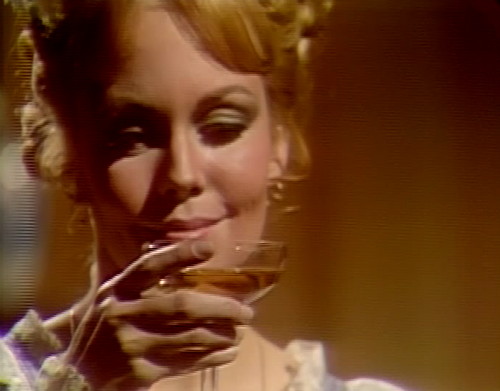 25 thoughts on “Episode 380: Something Borrowed”