“If I ever leave this place, it will be in my own carriage.”

The first day at a new job is always a trying experience, even if it’s 1795 and you don’t have to switch to a new email address. Ben Stokes just met Angelique earlier in the day, and now she’s cast a spell on him, and made him her slave. So now he probably has to fill out a W-4 form, and give her a cancelled check to set up the direct deposit.

But Angelique has no time for onboarding; she’s got some ambitious first-quarter deliverables. We’d better get started.

Ben’s only been in the job for thirty seconds, and already they’re having a staff meeting.

Angelique:  Do you know the forest here?

Angelique:  I must have a spider’s web.

Angelique:  You must get it from an oak tree. You must be very careful when you remove it. Not a single strand of the web can be broken. Bring it to me. Go.

Angelique:  He’s not your master now! I am. Now, hurry. I must begin my work.

And then we cue up the montage from The Devil Wears Prada, with Angelique throwing her coat down on Ben’s desk and giving him a series of baffling orders. “That spider web is from a maple tree,” she barks. “I said oak tree. And pick up the Polaroids from the lingerie shoot. Where’s that piece of paper I had in my hand yesterday morning?”

But Ben manages to bring back a spider web successfully, which isn’t bad for his first day on the job. And look how proud he is! So cute. This is basically the last happy moment he’ll ever have, so I hope he’s enjoying it.

Angelique’s got another doll today. Apparently someone’s been leaving the supply closet open in the arts and crafts room.

She explains, “My mistress Josette’s handkerchief will be a dress… and the spider’s web will cover the dress. And they will be held to the figure by a lock of her lover’s hair.”

Ben asks, “How’re you gonna get a lock of Mr. Barnabas’ hair?” Ben isn’t really in touch with the company objectives yet.

Angelique gets to work on the doll, and tells Ben that her mistress will soon be in love with Jeremiah, Barnabas’ uncle. She wants Barnabas to hate Josette.

Angelique:  Oh, I can see the look in his eye when he sees her after she’s been with Jeremiah. I can hear his voice, sending her home. And I will be the one who comforts him. Here, in this room. 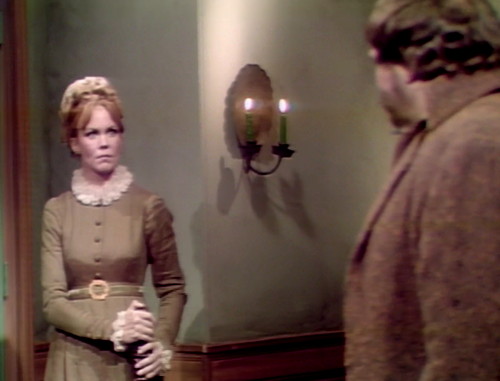 Ben says that he won’t let her hurt Barnabas, and she shoots him one of those Prada looks that says: Please bore someone else with your questions.

Angelique:  Yes, you will.

Angelique:  If you say one word…

Ben:  Nothin’ can stop me from tellin’ —

And then she lifts her hand, and suddenly he can’t speak anymore. This is a nice, inexpensive special effect, which goes some way toward explaining why the show’s new monster had to be a witch. They’re getting all the spook value of having another supernatural villain on the show, for the overstocked-warehouse-discount price of a spider’s web and a headless action figure. They don’t even have to break out the fog machine.

By the way, you remember what I was saying yesterday about critiquing the class structure, and Angelique bringing some social consciousness to the show? It turns out she has her own way of approaching those issues, namely: They only apply to her. She doesn’t really have a problem with the concept of giving orders to powerless servants. She just needs to be on the other end of it.

And then, just when you think you’ve got a handle on the episode, a hat walks in, and there’s a girl under it.

This is Millicent Collins, a cousin from New York. Her parents died five years ago, leaving a parcel of New York City real estate to Millicent and her ten-year-old brother, Daniel. Joshua’s opinion is that the wealth should stay in the family, which means: this is Jeremiah’s new wife.

And, lucky us, she’s a giggling lunatic.

Jeremiah:  How are you, cousin Millicent?

Millicent:  Oh, I’m much better, thank you. The quiet has done my nerves much good already. New York is a very noisy, hectic city, and I find that noise affects my nerves.

This is good news. Over the last few weeks, with very little warning, Dark Shadows has become a show that’s produced by, for and about the lunatic population. As we settle into the new storyline, we’re seeing all of the nice, sane characters like Joe, Mrs. Johnson and Carolyn, transformed into weird, ghoulish cartoons.

When I put it that way, it doesn’t sound like much of an idea, but we were so bored with Sam and Joe and Burke and Dr. Woodard and Sheriff Patterson, and getting the oddest feeling, and reviewing the case. After all of that, I think we deserve some funny hats. You know what I mean?

But Jeremiah isn’t having it. As soon as Millicent and Joshua are out of the room, he’s gossiping with the pretty new governess. She’s still claiming that she can’t remember anything about how she came here, and he says that he envies her.

Jeremiah:  You’re free, in a way. No past you can remember, no family obligations, no one trying to decide your life for you.

Then he catches himself.

Jeremiah:  Why do I think I know you well enough to say that?

Vicki:  Because you do.

Jeremiah:  Yes, but… I rarely say anything like that to anyone. We’ve talked only four or five times, and — I have the strangest feeling that we’ve know each other, some other time, some other place. Of course, I don’t believe in that sort of thing.

And then she looks at him. And it’s like a whole new show.

I mean, I hate Vicki and Burke. I am on record as a card-carrying Vicki/Burke hater. But here’s Vicki and Jeremiah, and they’re having romantic meet-cute scenes, and it’s all based on subtextual resonance from Vicki/Burke, and… I’m actually touched by it. I’m supposed to be immune to these two, and here I am: touched.

The main problem with Vicki and Burke was that they had exactly no obstacles. He liked her, she liked him, he had oodles of money, and neither one had any family members to get in the way. Now, they’ve been recast in a story where class and money and pride and time and basic common sense should be keeping them apart, but they’re drawn to each other. I kind of like these two.

And obviously, it’s perfectly safe for me to get interested in a developing romance on Dark Shadows, because this couple is destined to have a long and thrilling future together.

So let’s get back to the hat party. Angelique has swiped one of Josette’s hats, and she’s trying it on as Ben brings her Jeremiah’s hot toddy. (Link provided in case you’re rusty on your 18th century bartending skills.)

She adds a little something to Jeremiah’s drink, which will put him to sleep, and then Ben can get that lock of Jeremiah’s hair, for the action figure.

So we’ll close today’s episode with one more bulletin from the front lines of the class war.

Angelique:  Why, Ben — a lady doesn’t go into a gentleman’s bedroom. I may not be a lady yet… but I will be. Barnabas is never going to be ashamed of me. I study, Ben, and I watch. Why, my table manners are as good as Josette’s, and I can tell the finest silks — and not by looking at the price, either. You’ll see, Ben. If I ever leave this place… it will be in my own carriage.

Oh, this is going to be so much fun. I can just tell. Hats for everyone!

Angelique bobbles a line when she shows Ben the doll. “My mistress… my bris — my mistress Josette’s handkerchief will be a dress…”

When Joshua and Jeremiah stand by the stairs and talk about Millicent, a fly buzzes around Joshua’s face. You have to look closely to see it. At one point, it lands on his nose for a moment.

When Angelique is delivering her “table manners” speech to Ben, the camera follows her as she crosses the room to her mirror. As she’s walking, the camera is completely out of focus.