“Joshua Collins can think up a whole lot of ways to be cruel to a man.”

Vicki has mysteriously traveled back in time, from 1967 to 1795, and now she has to fit in, because she doesn’t know how to get home. She’s actually doing remarkably well, under the circumstances. Personally, I’m not sure what I’d do if I suddenly found myself in the wrong century; I don’t really have a backup plan for that. I’ve just tried to stay in the century that I’m in, and so far, it’s worked out okay. So Vicki does earn some respect, just for getting up in the morning and dealing with whatever year she happens to find herself in. 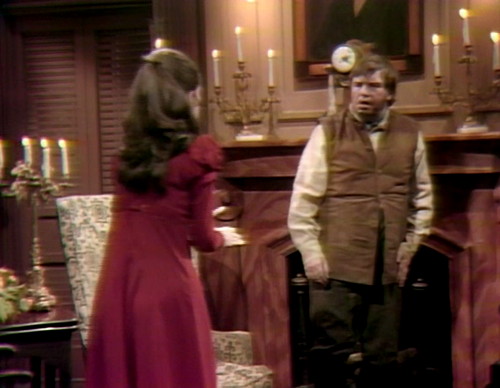 This isn’t Matthew Morgan, by the way. Admittedly, he does look a lot like Matthew, but there are some crucial differences, most notably the fact that Matthew lived in the 20th century, which is not where we currently are. Also, Matthew kidnapped Vicki and tried to kill her with an axe, and this guy did not. I’ll admit that these are subtle distinctions, but try to focus.

Naturally, employers tend to take a dim view of this kind of breakdown in staff relations. Joshua hears Vicki screaming, and he comes storming in, with a face like thunder.

Joshua demands an explanation, but the servant, Ben Stokes, has no idea what to say. Like everyone on the show, he used to exist in an orderly, peaceful world, and then Victoria Winters came into his life.

Ben:  I didn’t do anythin’. We were talkin’, and I turned round, and she started screamin’. I don’t know why.

Joshua:  You must have done something to frighten her!

Vicki:  He’s right. He didn’t do anything.

Joshua:  Then why did you scream?

Vicki:  Because… because he looks like someone I knew a long time ago. Someone who frightened me. But it was all my fault.

But Joshua Collins is not a man who backs down, once he’s gotten angry about something. He just glares and shouts even louder.

Joshua is fantastic, by the way. I don’t think I’ve talked about him much so far, because there are so many new characters around, but he’s exactly what the show needs right now. When the show started, Roger was the villain — a moody, vindictive manipulator — but the writing team’s turned over three times since then, and all of Roger’s rough edges were smoothed away. He became a nice guy, which is great if you plan to stand around and drink sherry, but there wasn’t any drama left in the character.

Joshua gives Louis Edmonds the chance to cut loose, and really play the tyrannical authority figure. Joshua is not a nice guy.

And even though Vicki is getting more comfortable here in the 18th century, she gets a firm reminder that the past is another country.

Joshua:  He has engaged a young lady of this house in conversation. He has been told repeatedly that he is forbidden to do that. He took a liberty that he was not supposed to take, and he must be punished for it.

Vicki:  But that’s not fair.

Joshua:  I am the master of this house, Miss Winters. I will decide what is fair and what is not fair. Do we understand each other?

In other words: the employers in the 1960s might be okay with backchat from the hired help, but you’re in 1795, and these people are not your family. 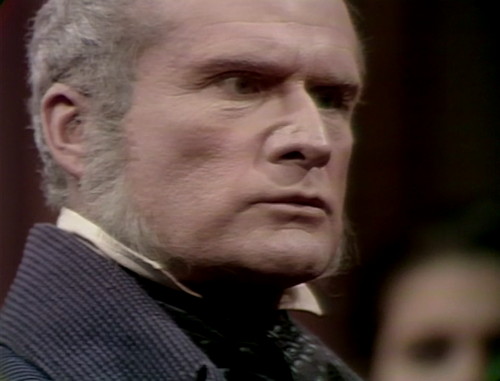 Joshua turns on Ben like he’s training a willful dog.

Joshua:  Now then, Stokes, about your request for a holiday tomorrow. I have decided to withdraw my permission. You will remain on the property and go about your duties as usual.

Joshua:  Don’t argue with me, man! I have given you an order.

And look at Ben’s little face! It makes me want to cry. I’m thrilled to have Thayer David back on Dark Shadows. He left the show almost a year ago, in December 1966, following the whole killing Vicki with an axe thing. But now he’s back to stay — he ends up playing eight different characters on Dark Shadows, four of them named Stokes. Ben is my favorite, and this expression is why. Sad little mans. 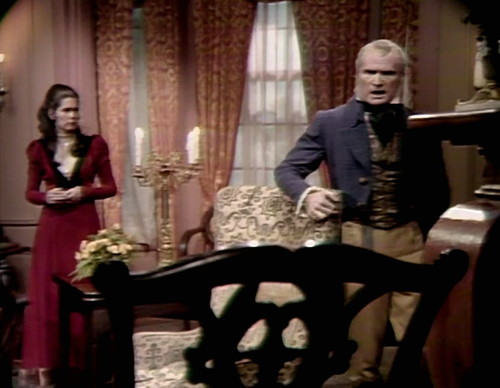 When Ben is dismissed, Vicki tries to plead his case, inspiring another Joshua rant.

Joshua:  Stokes must be kept in line. He came here from a prison in Salem; he’s indentured to me for the remainder of his prison term. I allowed him to come here because he’s strong and able-bodied, and I needed able-bodied men to help clear the property. But I don’t trust him, or any of his kind, and I must rule him with an iron fist.

Vicki:  But why was he in prison? What was his crime?

Joshua:  He broke into a farmhouse, and ransacked it. When he was caught, he claimed that he was returning from the war, and he was starving and freezing.

Vicki:  Well, perhaps he was!

Joshua:  You sound like Jeremiah and Barnabas. If they had their way, he would sit at table with the entire family!

So, Vicki — again, not your time period. People are different here. Also, you might want to keep an eye on references to the justice system in Salem. That’s going to be a real pain in the neck for you later. 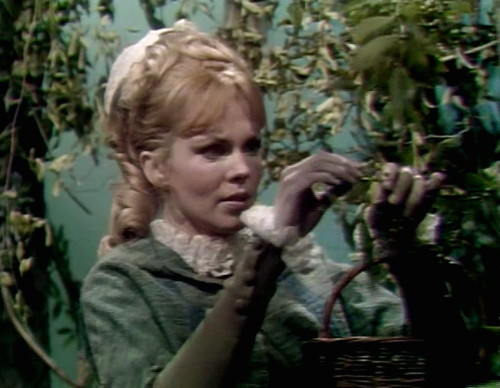 And then Ben’s day just keeps getting worse. Outside, he runs into Angelique, who’s gathering deadly nightshade from a tree for some crazy-girl potion she’s planning. This is a pretty good trick, because nightshade usually grows on low bushes.

Ben spots her, and asks what she’s doing. She tells him that she’s gathering bay leaves, to make a special salad for her mistress.

Bay leaves also grow on low bushes, but what the hell. Maybe plants were different back then too.

Angelique doesn’t want Ben to mention her “mistake” to anyone, so she flirts with him, hoping to get on his good side. This just makes him confused.

Ben:  Why are you wastin’ your time talkin’ to me?

Angelique:  I don’t consider it a waste of time.

Ben:  I shouldn’t be talkin’ to you. If anyone sees me, I’ll be punished for it. Whipped, prob’ly. I’m not supposed to talk to the womenfolk… by order of Mr. Joshua Collins.

Angelique:  But that’s a ridiculous order! Why, I never heard of anything so cruel.

Ben:  Joshua Collins can think up a whole lot of ways to be cruel to a man. Someday, I…  (He clenches his fists, but then stops himself before he goes too far.)

And all of a sudden, there’s a point to Dark Shadows.

This was an unusual thing for a soap opera to have in 1967. Soap operas weren’t supposed to be about anything, other than a strategy to get housewives to leave the television on until the next commercial break.

As James Thurber wrote in “Soapland“, his 1948 series of articles on radio serials for The New Yorker, the recipe for soap operas was simple:

“Between thick slices of advertising, spread twelve minutes of dialogue, add predicament, villainy, and female suffering in equal measure, throw in a dash of nobility, sprinkle with tears, season with organ music, cover with a rich announcer sauce, and serve five times a week.”

That was still the case in 1967. Soap operas expressed a point of view, but it was entirely focused on personal, domestic tragedies, and the message was, essentially: Be brave, take care of your family, and endure. 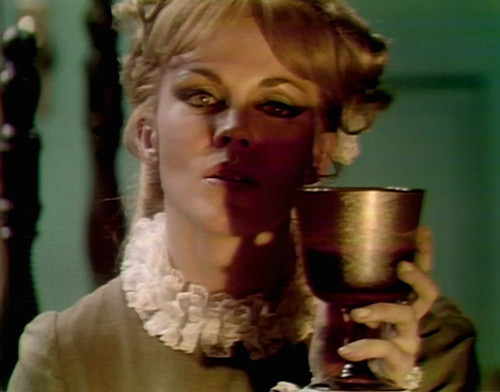 But that message was about to get more mature, and more complicated. In July 1968, Dark Shadows was bumped a half-hour later on the schedule, and the 3:30pm timeslot was given to One Life to Live, the first explicitly socially conscious soap opera.

One Life to Live focused on a diverse community, with five core households — a wealthy white Protestant family, a middle class Irish Catholic clan, a Jewish family, a working-class Polish family, and an African-American family. Early storylines focused on interracial dating, drug abuse, mental illness and, of course, class conflicts between the families. 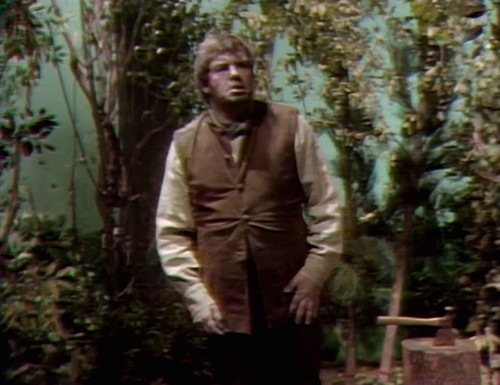 But here we are, seven months before One Life to Live debuts, and this entire storyline is about social class. Joshua rules his estate, and his servants, with that “iron fist” he’s so attached to. Barnabas is marrying a wealthy heiress, and Jeremiah is expected to marry his well-to-do cousin, Millicent.

And then there’s Angelique, the class war’s ultimate fighting champion. She believes that Barnabas is more passionately in love with her than he is with Josette, but he’s convinced himself that he wants to marry the family-approved rich girl.

That’s a debatable point, which has been fiercely debated in the blog’s comments section over the last couple weeks, but my point is that Angelique’s frustration and rage is partly due to the deeply unfair class structure that places her, firmly and permanently, in the role of disposable serving wench. 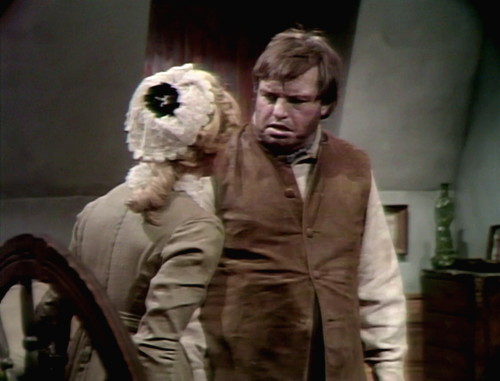 Nobody says that Dark Shadows has a claim to OLTL’s “first socially-conscious soap opera” title, because people don’t take fantasy/sci-fi storylines seriously. Also, the show is clearly bonkers, and it’s being assembled by people who are essentially falling downstairs every day and hoping to find something interesting at the bottom.

But when Angelique summons Ben to her room, gives him a potion to drink, and tells him that now he’s her slave…

Just keep an eye on the poor people, that’s all I’m saying. Life is about to get pretty hard for anyone with an income.

At the end of Angelique’s scene in the woods with Ben, she bends down to pick up the leaves that she spilled on the ground. You can see the burlap that makes the forest floor bunching up at the bottom right of the screen. Also, she picks up leaves that are attached to a twig and puts them in her basket; the twig hangs down from the basket as she picks up more leaves. She pretends that she doesn’t notice.

They almost get the Chromakey right this time. A ghostly vision of Angelique appears in the forest to Ben, beckoning to him. They could get away with her appearing about a foot too short, because she’s meant to be far away, but Ben’s eyeline doesn’t match.

Anachronism alert: When she’s making her potion, Angelique unscrews the lid of a bottle. Screw lids weren’t invented until 1858.