“I don’t think it’s very healthy, living in this house.”

Mrs. Johnson must be an angel in human form, that’s the only way you can explain it. I don’t care how many wings they’ve shut down — Collinwood is a mansion, and as far as we know, she’s the only person taking care of the whole place. She cleans all the rooms, cooks all the meals, and monitors the radio for plot-relevant air disasters. Plus, four months ago, Mrs. Stoddard held a wedding in the drawing room, confessed to killing her first husband, and asked the local sheriff to dig up his body in the basement, and Mrs. Johnson wasn’t even invited.

And now she has to deal with this nonsense. She walks into Julia’s room, and finds her standing on a chair, trying to take the drapes down.

So, stop me if you’ve heard this one before, but the situation is that Barnabas has decided that instead of killing Julia, he’s going to drive her insane, using a spell that he learned from an Indian mystic who knew the secret magic number of the universe. I’m serious. That’s the current storyline.

So far, that plan is actually going pretty well. Julia’s been seeing visions of Dr. Woodard, who keeps pointing out that she murdered him. I can understand how that would be upsetting, although I’m not sure why she’s taking it out on the decor. 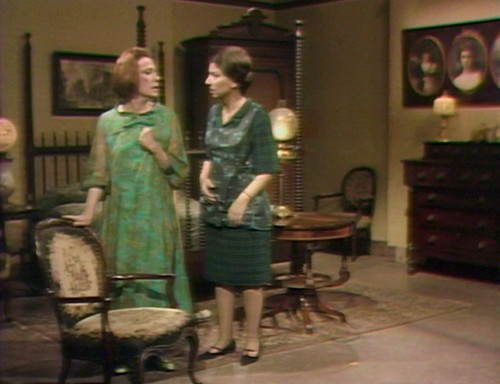 By the end of the scene, Julia is actually hearing Dr. Woodard’s voice inside her head. I’m going to strip the Woodard lines out, so that we can take a look at this scene from Mrs. Johnson’s point of view.

Julia:  I know it wasn’t him, of course, but it was so real… It frightened me. I just have to keep remembering that it was only a dream.

Julia:  Mrs. Johnson… did you hear that?

Julia:  That! Did, did, did you hear anything?

Julia:  You shouldn’t have! I won’t listen to you!

This storyline is exploring some new frontiers in etiquette, namely: How crazy can a house guest be, before you start carelessly leaving train schedules around, and talking about how nice Boston is at this time of year?

Then we have a Carolyn/Tony date scene, which I will now quote from at length, because it’s a great scene and why the hell not.

Tony:  This is not exactly what I had in mind to end our evening. I half expect Roger Collins to come running out of the house, ordering me off his property.

Carolyn:  He won’t, I can guarantee it. I enjoyed dinner.

Tony:  You know, I believe you.

Tony:  You know the answer to that.

Carolyn:  Hmm. A firm no. You make it very difficult for a girl.

See what I mean? So cute. He’s only been on the show since Tuesday, and he’s kind of my new favorite character. Carolyn needs a guy to interact with who isn’t a) related to her and b) the living dead. 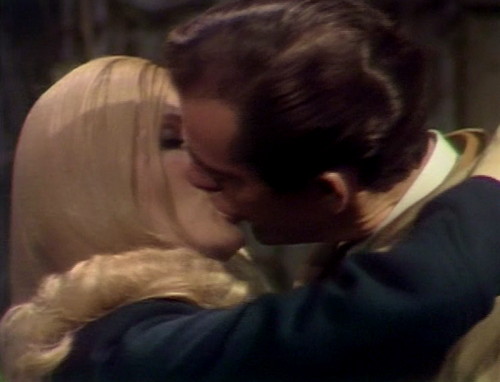 They start kissing, so I guess the “maybe you just like trouble” attitude is wearing off.

Tony:  Well, now… This is more what I had in mind.

Carolyn:  Why didn’t you do it, then?

But then a dog howls, and Carolyn breaks away from him, looking off into the distance. She collects herself.

Carolyn:  Are you… busy tomorrow? We could have lunch.

Tony:  You mind if we finish tonight first?

Carolyn:  I’ll pick you up at your office.

Carolyn:  I have to talk to you about Julia Hoffman, your favorite client. I’m very worried about her.

It’s because he’s funny, really. He’s sarcastic, and he challenges her, and he doesn’t accept her nonsense. In other words, he’s the opposite of Burke, and we’re actually sorry for him when his date is interrupted by an urgent text message delivered via howling dog.

But it’s good that they’ve figured this out; creating romantic chemistry is an important skill for a soap opera. If they ever decide they want us to start paying attention to humans again, this is how they should do it. 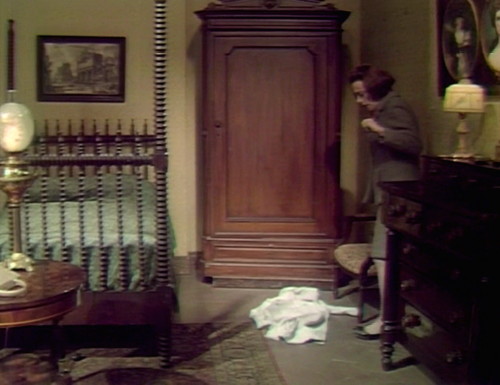 Meanwhile, in Julia’s room, the drapes are gone, but she’s still not happy. Now there’s a white coat on the floor, with Dr. Woodard’s nametag on it. Horrified, she reaches for the coat, and a rat on a string scampers out and runs across the room.

The rat on a string moves too fast for me to get a clear screenshot, but I assure you, it’s fantastic. It makes high-pitched squeaky sounds, just like the bats that we’ve seen hovering at the window. It’s such a simple, inexpensive bit of crazy that it makes me wonder why they bother to make television shows that don’t have rat on a string. We need to start telling more people the secret magic number of the universe. 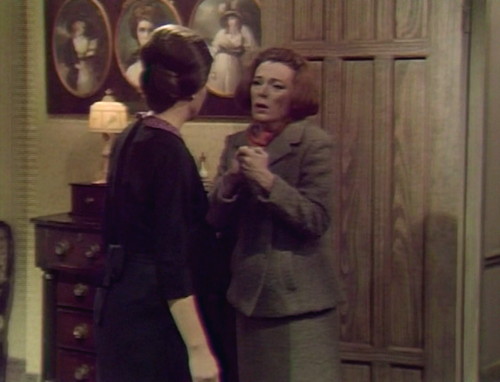 And so it ends the only way that it could possibly end — with Julia going to the Old House to confront Barnabas. That’s what this week is really about — these two monsters facing off against each other, and what that’s doing to the people who live nearby. Carolyn, Tony, Mrs. Johnson — they live in the shadow of this titanic struggle, and it will consume them all.

Barnabas’ tactic here is possibly the craziest thing he’s ever done. He tells her that Dr. Woodard’s ghost has been haunting him, too.

Barnabas:  I’m afraid I’m developing a conscience, Julia. We’ve shared so much — secrets, plans, some of them disappointing to us both, and the treatments… I don’t think you realize how depressed I was when they didn’t work.

Julia:  You turned on me then.

Barnabas:  I turned on everyone.

Barnabas:  I needed her.

Barnabas:  Josette is dead. I am no longer the romantic that I was. I realize now that I cannot re-create Josette any more than I can summon a ghost. Josette has no desire to see me. Otherwise, she would come back.

She’s not buying it.

Julia:  You’re lying. You’d never give up that dream of Josette.

Barnabas:  You will not permit me to change?

Julia:  Oh, Dave Woodard didn’t come into this room. I don’t believe a word of it.

Barnabas:  So, he’s your ghost. Your guilt is so obsessive that you want to suffer alone.

And somehow, he manages to get to this.

Barnabas:  I owe you so many apologies. Perhaps, some time, I will be able to make them all, but one I must say now. You offered me nothing but the best of yourself… and I chose then to ignore it. I made myself live in a lost dream world; I cannot do that anymore.

Barnabas:  Will you help me… Julia?

Barnabas:  I care for you, Julia. I need you.

Julia:  I… I’m all mixed up. When I came into this house tonight…

Barnabas:  Don’t think about why you came. Tomorrow, we will spend the evening together, we’ll sort it all out.

Barnabas:  You won’t be afraid now?

Julia:  I have only one fear… that when I see you tomorrow night, I will find you changed again.

Barnabas:  That will not happen. 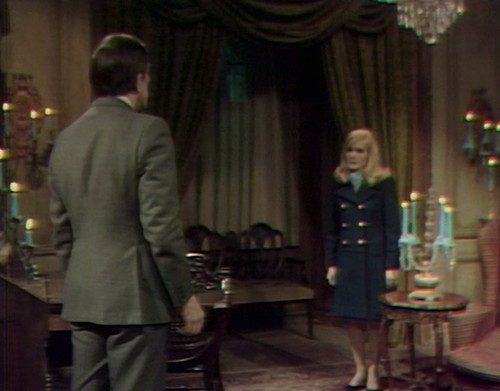 When Julia leaves, Carolyn comes in — she’s been listening to the whole scene from the other room. She says, “Barnabas, that was very cruel of you. She really loves you. You shouldn’t have done that.”

She’s right. That crossed a line. Barnabas and Julia are now on a collision course. They’re the most interesting, most passionate characters on the show, and the audience loves them both — and they are absolutely determined to destroy each other. This storyline just can’t continue.

They’re going to have to resolve this story somehow and move on, and it’s starting to look like the only way to do it is to set the show on fire, watch it burn to the ground, and then start over again.

Guess what happens next week.

Tomorrow: Crazy Lady on the Loose.

This might have been scripted and not a blooper, but it’s amusing that Carolyn doesn’t know the story of Cinderella:

Carolyn:  I just had this feeling that I should come home.

Carolyn:  Yes. At the first stroke, I’d turn into a pumpkin, or whatever she did.

When Tony and Carolyn kiss, someone in the studio whistles in appreciation.

As Tony says his final line to Carolyn, there’s some studio noise — a bang, some footsteps — and then the camera jiggles up and down a bit.

When Julia has “thinks” about what Mrs. Johnson must have thought about her, a fly lands on her forehead. She brushes it away.

The rat on a string effect needs to be done at the right moment, when they’ve got the correct camera on Julia. She hesitates, looking over to someone in the studio to make sure that it’s the right moment to bend over and pick up the white coat.

In the credits, for the second day in a row, Jerry Lacy’s name is misspelled: “Jerry Lacey”. They get it right tomorrow.

Tomorrow: Crazy Lady on the Loose. 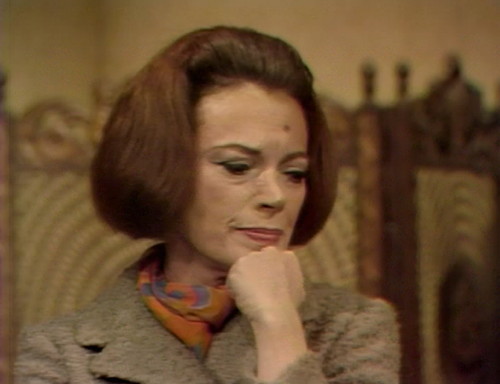