So then Carolyn rushes over to the Old House, to tell Barnabas what happened in yesterday’s episode. It’s not easy.

Carolyn:  In her hands. She’d taken it from the clock.

Barnabas:  The clock? What clock?

Carolyn:  The large clock, in the foyer at Collinwood.

Barnabas:  Well, you seized the notebook, of course?

Carolyn:  This lawyer came in.

I know, right? I feel bad for the guy; he’s only missed one episode, and now he has no idea what she’s talking about. 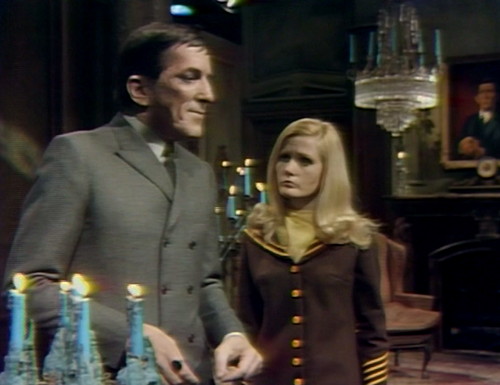 And that’s not even the problem. The real problem is that Carolyn has walked into his house wearing a brown and orange sailor-suit top, apparently on purpose. Carolyn appears in four scenes in today’s episode, and she’s got a different outfit every time. This isn’t the good one.

Anyway, Barnabas is kind of stressed out, quelle surprise. He decided last week that he wants to kill Julia, but he can’t do it until he knows that her notebook has been destroyed. He sent Carolyn to get the notebook, and now she comes back and tells him that it’s locked up in a safe, in the office of a lawyer that he never even heard of. This is definitely going to come up at her annual performance review.

But Barnabas has an extremely soap-opera idea.

Barnabas:  He’s young, this man. Is he attractive?

Barnabas:  Then you won’t mind what you must do.

And that’s all you have to say. Carolyn is a soap opera character; you just turn the dial to “vixen”. Not a problem.

And then Barnabas gets an idea. There might be an alternative to killing Julia.

Barnabas:  Suppose Dr. Hoffman decides to speak, to tell everything she knows about me? How can we make sure that no one believes her?

Oh! I know. The bat puppet!

Barnabas:  You should, you gave me the clue. You told the lawyer that she imagines things, and you’re right. But she must imagine much, much more.

Yes! You get the bat puppet, I’ll crank up the fog machine. 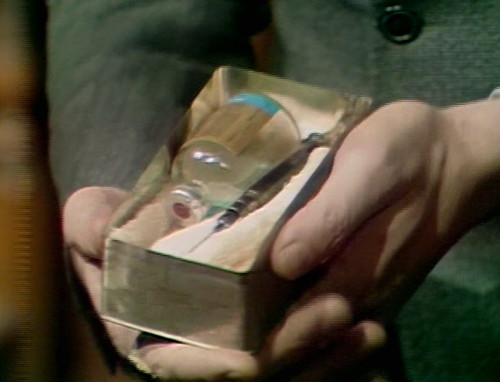 Or, sure, a hypodermic needle in a box. That’s an option.

Barnabas’ new brainstorm is that he can drive Julia insane by making her believe that she’s haunted by the ghost of Dr. Woodard, who she helped to murder a few weeks ago. This is the hypodermic that she filled with poison, which he’s apparently keeping in a drawer in a credenza about three feet away from his front door. I suppose it’s good to keep your used murder weapons close by, in case you want to incriminate yourself in a hurry. 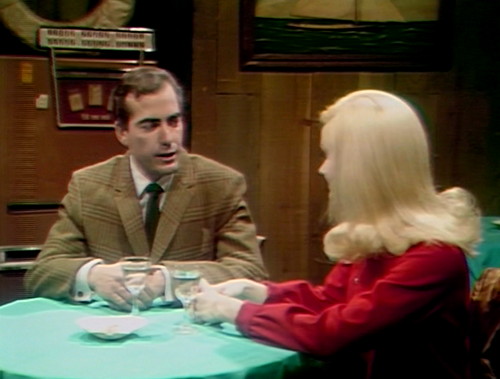 Okay, time for outfit #2. It’s the next afternoon, and Carolyn has tracked Tony down at the courthouse. She invites him to the Blue Whale for a drink, which is apparently… water, in a wine glass. At least, that’s what it looks like from here. Luckily, the dialogue is sparkling.

Tony:  Why were you in the courthouse just now, and why did you come to my office last night?

Tony:  You could get into trouble, trailing strange guys.

Carolyn:  And you don’t even see me. Just a sign, flashing: Carolyn Collins Stoddard. 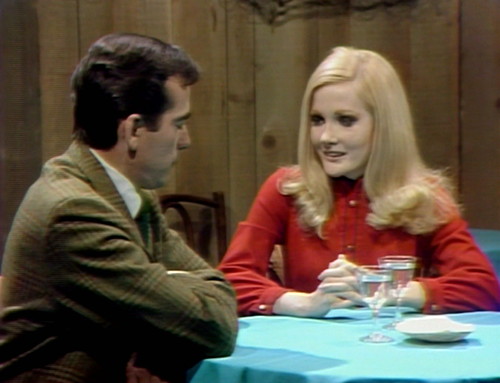 They’re kind of adorable. It’s a sweet first date scene, which we haven’t seen a lot of lately.

Carolyn:  Will you try something? Close your eyes.

Carolyn:  Why? Do you always play badly?

Carolyn:  Forget my name… what I look like. You’re on a bus to Bangor. You’ve been asleep. You wake during a stop; a stranger sits down beside you. You open your eyes… and turn.

Tony turns toward her, opens his eyes, and grins.

Tony:  Okay, you’re pretty, but we’re not on a bus. Now finish your drink.

This is such a standard soap opera trope — the flighty rich girl meets the hard-working, emotionally demanding boy — that it only takes two scenes, and you instantly know where it’s going. She flirts, he fights, she drives him crazy. They fall in love. Except this version includes a vampire.

The new writer, Sam Hall, joined the show with yesterday’s episode, and he’s good at setting up these intentional narrative collisions — mixing genre conventions together to create something new. They seem to be watering down the “hard-boiled detective” element, but the soap opera “rags meets riches” story is strong enough to be a good contrast with the vampire drama. 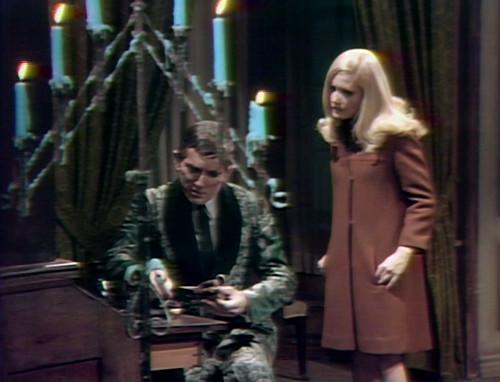 And then he adds something even more peculiar to the mix. Carolyn goes back to the Old House — in another outfit, by the way — and she finds Barnabas preparing the ingredients for a ritual. Strap in, this gets a little weird.

Barnabas:  An Indian I knew in Barbados long ago taught me the secrets that he used when he needed enormous power.

It’s kind of a long story, so he sits her down, and positions himself so that he has a clear shot at the teleprompter if he needs it.

Barnabas:  A brilliant man. His tongue, he said, spoke into the ears of the gods. He was jailed and tried as a warlock. When the soldiers came to hang him, the cell was empty.

Barnabas:  Yes. You see, the gods told him the secret magic number of the universe, the number which unlocks all the rules that bind you mortals to your daily, dull lives. The number is whispered so deeply into the soul that no one can remember it, without… using the magic…

That’s not actually the way that line was supposed to end, but you get the general idea. This is Hall’s first episode writing for Barnabas; he hasn’t learned yet that you can’t give Frid speeches like this. Typical n00b mistake.

But the point is: we’ve never seen anything like this on the show. The secret magic number of the universe? We’ve seen lots of random vampire powers, but now Barnabas is explicitly telling us that he’s borrowing from a different cultural tradition. It’s supernatural sampling.

Barnabas lights a taper, and sets fire to whatever the heck is supposed to be in that little dish. He says, “Now I am ready,” and picks up the dish. 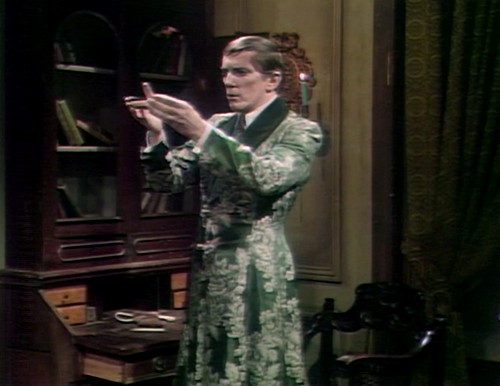 And now we have the following astonishing thing: A vampire from a port city in Maine standing in his living room wearing a necktie and a green floral dressing gown, swirling a dish around in his hands, and mumbling over it in make-believe Haitian Creole. I believe that this was the first time they’d ever done that on daytime television.

These days, obviously, it’s practically a cliché, but it was groundbreaking at the time. You have to give them credit.

There’s a weird gap in the first act, when Carolyn and Barnabas are talking about Tony’s safe — a clumsy edit that breaks continuity. There was a similar cut in episode 352. This is basically the answer to the question, “Why did they just leave the camera running when someone made a mistake?” The rudimentary video equipment made the edits look worse than the bloopers.

When Barnabas walks over to the credenza to get the hypodermic, the camera tilts up, to keep the petite Carolyn in the shot. This reveals the top of the Old House set, and the studio lights.

When the closing credits begin, the camera turns off for a moment, and Jonathan Frid’s credit plays over darkness. Then they turn it back on.

In the credits, they spell Jerry Lacy’s name incorrectly: “Jerry Lacey”. They do the same thing tomorrow, but they get it right on Friday. 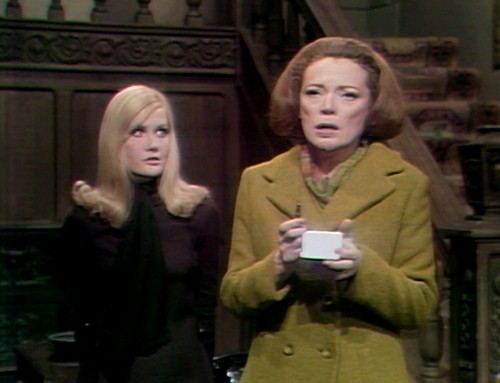