“I’ve got a feeling about this doll.”

It’s the next morning, and Joe’s been out all night searching for young David, who’s trapped in the secret room in the mausoleum.

Joe walks over to Maggie’s house, and he slumps down into a chair to grab a few moments of rest. He’s exhausted, and dirty, and he hasn’t shaved. And you remember how yesterday I noticed that Joe is really handsome? Cause, damn.

But there’s no time for romance; we’ve got serious business today. Worn out from weeks of baffling mysteries, Joe finally says what everyone’s been thinking.

“We all know there’s something very strange going on in this town,” he says, “but I’m beginning to think that it’s something so strange that…”

“That it borders on the supernatural.”

BOOM! And the world explodes. 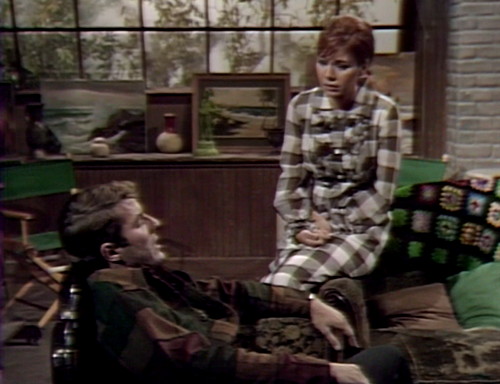 This is an important thing for them to figure out, because the Dark Shadows universe has changed quite a bit lately. When they started a year ago, they were playing in that bland, vague territory where the ghosts might turn out to be metaphors for the haunted places of the human heart, or whatever.

Over the last few months, the show has taken some definitive steps. Barnabas is a vampire; Sarah is a ghost. And pretty soon, the writers are going to realize that allowing those creatures in means that all kinds of impossible things can jostle their way through the doorway from the dark dimensions.

Now, in a fictional universe where “the supernatural” really exists, there’s a standard sentence that the characters tend to reach for. It begins as an expression of denial, but after a while, they start to use that sentence as a lever, wedging it under the untidy corners of reality, to pry the truth loose for everyone to see.

You know what that ritual sentence is; everybody does. It’s the thing that frightened humans have always said, when the darkness creeps closer to our little circle of firelight.

And as Joe, worn out from a long night of chasing shadows, finally admits that something uncanny is loose in the world, Maggie invokes the ritual.

Say it with her. You know the words.

“I keep thinking that
there’s some sort of logical explanation
for everything that’s happening.” 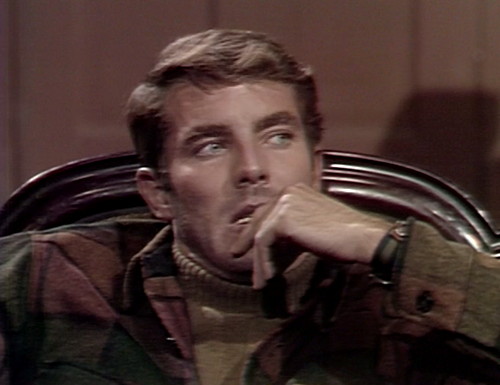 And she’s right, there is a logical explanation, namely: Sarah’s a ghost. In this universe, that’s the explanation that fits the facts. As the characters piece together what they know, any other theory just collapses in on itself.

The principle of Occam’s razor says that the hypothesis with the fewest assumptions is the most likely explanation. At a certain point, “Sarah is a ghost” becomes the simplest hypothesis.

This idea gets developed further when Dr. Woodard arrives; Joe asked him to come over for a chat about the nature of observable reality.

Joe says that he wants to talk about Sarah, and Woodard responds, “Sarah? What about her?”

What do you mean, what about her? Everything about her. Do we have to go over this every damn time? 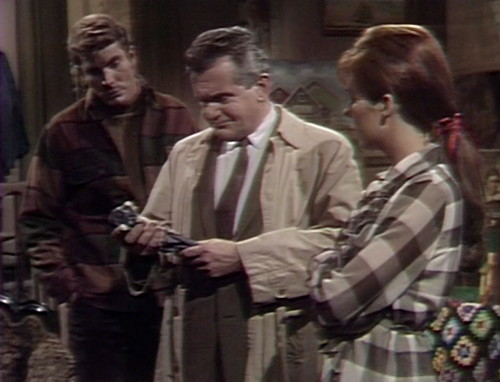 Joe tells Dr. Woodard that Sarah visited this house the other night, and she dropped off her doll on Maggie’s bedside table.

As we’ve discussed before, the nature and composition of these ghost props defies all attempts at analysis. The items appear to be physical manifestations of Sarah’s 18th century possessions, possibly constructed out of weapons-grade Ecto Cooler. Sarah can leave these objects behind, and then absorb them again when she takes them back.

Woodard asks if he can borrow the doll for a while, and finishes the scene with a flourish of over-dramatic potboiler dialogue.

Woodard:  I may be out of my mind, but I’ve got a hunch that we can learn something from this thing.

Woodard:  I’ve got a feeling about this doll… a feeling that it could lead us closer to the truth than we’ve ever been before.

But that’s enough jibber jabber; let’s go find out what the ghost is up to.

Willie’s out patrolling the grounds around the Old House, and Sarah appears behind him. He knows who she is, and he tries to keep his cool.

Sarah:  I’ve been looking for him, too!

Willie:  You have? You wanta see him?

Now, just a quick point of order: that exchange makes no sense at all, not even by the loose standards of Dark Shadows ghost dialogue.

Sarah knows where Barnabas is. She’s been spotted in the Old House, and Willie saw her looking in the window just three days ago. The sentence “I’ve been looking for him, too” is meaningless mouth noise; it might as well be a sound effect or a music cue.

It’s even worse when she says that she can’t come to the Old House right now.

Sarah:  I have to look for somebody who’s lost.

Willie:  Don’t you know where he is?

Sarah:  No. Sometimes I almost know where he is, but then I’m not sure.

And that’s just pure horseradish; I can’t even express how pointless and lazy that exchange is.

Sarah knows that David is trapped in the secret room in the Collins mausoleum. She brought him there. I have literally no idea what writer Ron Sproat thinks is happening in this scene.

This is basically a repeat of what Sarah said when Maggie was taken away to Windcliff Sanitarium. At the time, she told David, “Sometimes I almost know where she is, but then it all fades away, and I begin to cry again.”

That scene actually meant something — Maggie was quickly spirited away, far outside Sarah’s usual territory. You could imagine Sarah standing near the Old House, listening, trying to tune into some kind of psychic radio signal from far away.

But you can’t just take that scene and copy it into a new episode like this, because she knows exactly where David is. She has to. If we’re really supposed to believe that Sarah can’t find David — in her own crypt, where she left him — then this is all mouth noises and nothing but.

Sarah’s character has never been particularly well-developed, but these days it’s flying to pieces every time she opens her mouth.

To finish this baffling episode with the shock ending that it deserves, Dr. Woodard confronts Julia, who he believes knows more about little Sarah than she lets on. Julia’s eyes are open, so obviously she’s lying.

Julia:  Actually, I know very little about her. I haven’t given her much thought.

Woodard:  Well, I have… and believe me, Julia — that little girl, to me, is at least intangible. It’s she who’s made me begin to suspect the supernatural.

And that’s something that I love about Dark Shadows — what Woodard just said might be the scripted dialogue, or it could be a garbled blooper, or some mysterious combination of the two, and there’s absolutely no way to tell.

“Sarah is at least intangible”? What the hell is that supposed to mean? 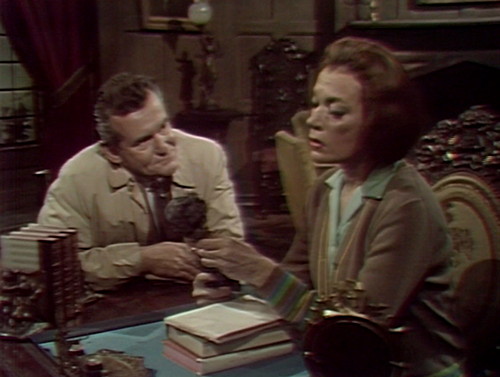 Caught on the back foot, Julia reaches for the traditional response.

Julia:  It wouldn’t surprise me if there’s a very logical explanation to all that.

Woodard:  Oh? Well, there’s nothing in the way of a logical explanation… about this.

And he hands her the wooden doll that Sarah left for Maggie.

There’s no way out of this situation except to step on the gas and drive straight through it, so here we go.

Julia:  Well, it looks like it’s in very good condition.

Woodard:  It looks as if it just came out of a toy shop. There’s no scratches on it, the material’s in excellent condition. The paint hasn’t even begun to peel.

Julia:  All right. What about it?

Everyone raises an eyebrow. The fact that this is incomprehensible doesn’t matter. It’s the dawning of a new age. Sense is optional.

Tomorrow: Between Sentiment and Survival.

When Willie comes to Collinwood in the middle of the episode, Julia doesn’t close the front doors all the way, and they swing open again as Julia and Willie walk into the drawing room. The front doors are magically closed in the next scene, when Dr. Woodard arrives.

Tomorrow: Between Sentiment and Survival. 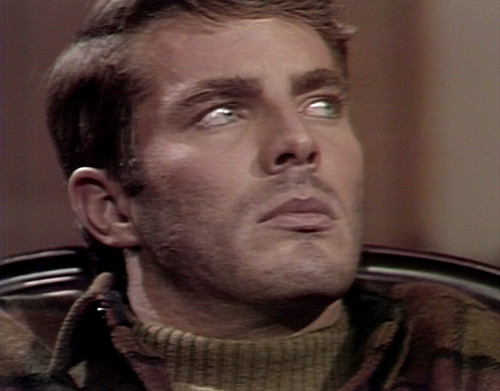 11 thoughts on “Episode 314: A Logical Explanation”