I know it’s not politically correct to say it, but this is why you can’t trust vampires.

Hysterical governess Victoria Winters is out on the terrace, terribly concerned that her young charge, David, has wandered off into the night. Barnabas stops by, and she pours out all of her fears and anxieties. She begins to sob, and he comforts her, holding her close and making soothing sounds.

And then, apparently, he decides to just go ahead and rip a new hole in her neck. For the last several weeks, he’s been carefully positioning himself as a trusted friend and advisor, setting up the early stages of a long-term seduction plan. This moment is an uncharacteristic lapse, a gentleman jewel thief about to smash a piggy bank.

But what the hell, he must be thinking. You only live once, approximately. 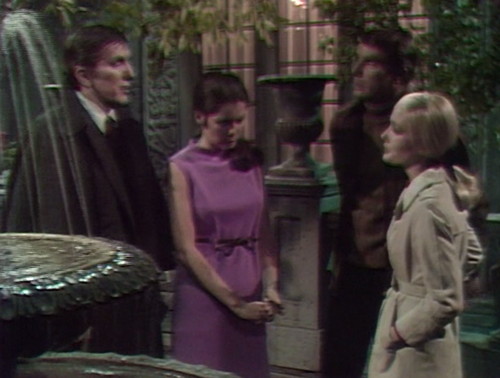 Just at the last moment, Barnabas gets fang-blocked by Carolyn and Joe, who’ve been out searching for David. As they approach, Barnabas ducks over to the wall for a moment, to take the plastic fangs out of his mouth and give himself a quick make-believe cold shower.

When he rejoins the humans, they explain that David wandered off to find Sarah, the little girl who seems to be involved in all the recent mysteries. Barnabas is disturbed to learn that David might be getting close to discovering his secret, and he slips away into the night. 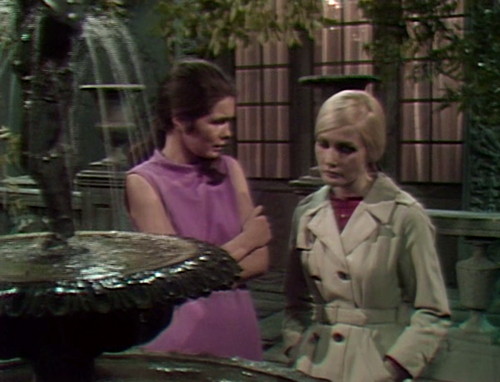 Once the boys are gone, Carolyn says, “Vicki, I think we should call mother and Uncle Roger and let them know what’s going on.”

Vicki disagrees: “There’s no use in getting them worried. They can’t do anything from Boston.”

Now, we haven’t heard anything about this trip to Boston before; it’s news to us. This is a trick that soap operas do when a character hasn’t been seen on screen for a little while, and they want to explain the absence. In this case, Roger slipped quietly off the canvas about six weeks ago. So they’ve given him a little retrospective vacation, and when he shows up again later this week, they’ll have an excuse to recap everything that’s happened lately.

Unfortunately, this tends to happen quite a bit with Roger. He started out as the show’s main villain, but a year’s worth of melodrama has smoothed out all the wrinkles in his character. Now he’s mostly comic relief — a great character to have around, but not deeply involved in any of the storylines. So he drifts out of sight every once in a while, and they have to invent business trips to Boston or Bangor so they can do another “welcome home” sequence. 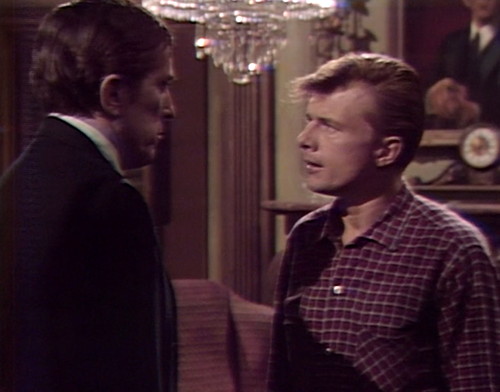 Meanwhile, in the world of characters who are actually on the show, Barnabas goes back to the Old House and tells Willie that they’ve got to find David. Sarah is actually the ghost of Barnabas’ dead little sister, and she may have revealed his secret.

This is basically the same scene that they did on Friday’s episode, but they’ve changed sides. On Friday, Barnabas was sure that Sarah would never do anything to hurt him, but now he’s convinced that she will. 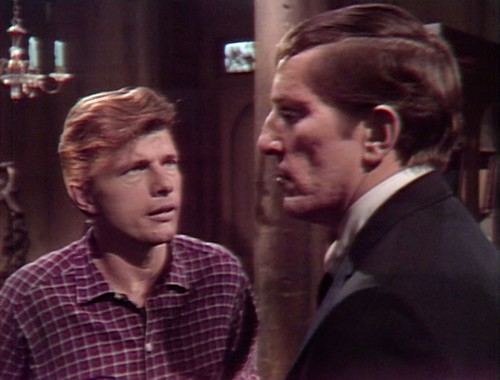 Willie:  What if he does know too much? What happens then?

Barnabas:  You know the answer to that.

Willie:  Well, you wouldn’t harm him, would you?

Barnabas:  Of course I’d have to do what was necessary.

Willie:  Barnabas! He’s only a little boy… and a Collins! You wouldn’t harm a member of your own family, would you?

Barnabas:  It would certainly be regrettable…

Holy cow! That’s some heavy stuff. They’ve been easing off on the vampire mayhem lately, because they’ve realized that Barnabas is the most interesting character on the show, and they want to keep him around.

It seemed like they were building to a fight between Barnabas and Burke, who’s an adult and can take care of himself. But that storyline seems to have been nerfed last week, so there’s still a vacancy for a character that the vampire can kill. Now they’re raising the possibility that Barnabas’ next victim will be his ten-year-old great-great-grand-nephew, the only male heir to the Collins name.

That’s dark, and it’s going to get darker. We’re just on the verge of the most sinister version of Barnabas that we’ll ever see. 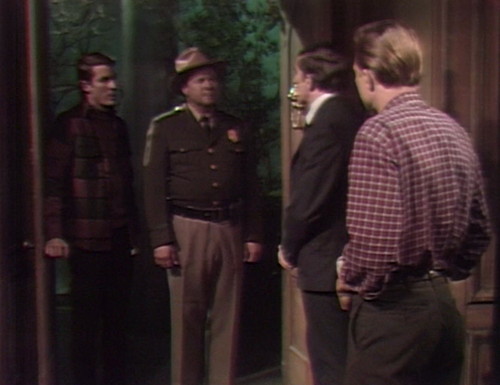 But first, let’s do another farce sequence featuring the breathtakingly incompetent Sheriff Patterson. He’s come to search for David, who has a history of sneaking into the Old House to play.

This is a good idea, so obviously the Sheriff didn’t think of it on his own. It was suggested by Joe, who’s not officially deputized, but Patterson is letting him tag along just to make sure he’s violating all known law enforcement procedure.

Then they do a five-second round of dialogue chicken, while they try to figure out who’s supposed to talk next. Patterson folds.

Patterson:  We’d like to take a look around your house, if you don’t mind.

Barnabas:  Well, not at all.

Wait, that wasn’t right. He gropes for another line.

Barnabas:  My house? Here? Why?

Joe:  We have a hunch that David might be hiding in here.

Barnabas grasps the word “here,” and milks it for a while.

Barnabas:  David, here? Why would he come here?

Barnabas:  But… why would she be here?

It’s gorgeous, another in the series of Great Moments in Accidental Dialogue. 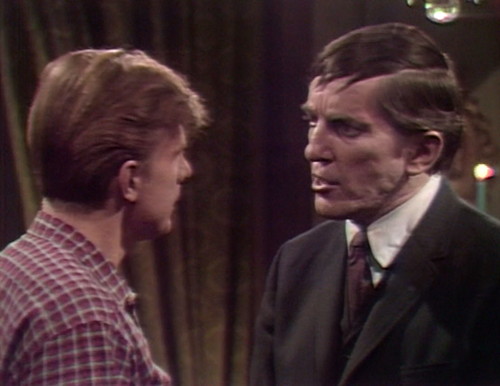 Joe goes upstairs to search, and the Sheriff checks the back of the house. Meanwhile, Willie and Barnabas have a quick conference.

Barnabas:  They haven’t yet.

Barnabas:  Be quiet, you fool!

Barnabas:  I said, be quiet!

I love that exchange. It sounds like it’s lifted from Jack Armstrong, the All-American Boy, but even in the old radio serials, the villain didn’t have an official “coffin room”. 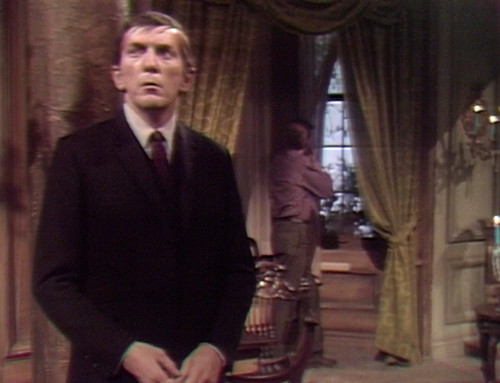 It’s close to dawn, and we hear the crow of the Convenient Rooster, which they apparently keep nearby on an imaginary farm to let them know when the sun’s coming up.

Barnabas and Willie are getting increasingly nervous that Joe and the Sheriff will find the coffin just as Barnabas is climbing into it. Because this is Dark Shadows, the audience is rooting for the vampire, who ten minutes ago announced that he was planning to kill a child. 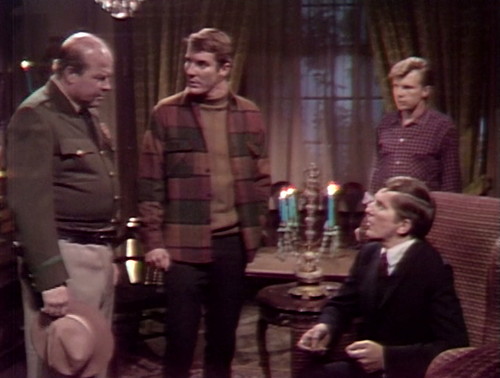 Joe and the Sheriff don’t find anything upstairs, so Patterson says that he wants to take a look in the basement. Barnabas tries to stall — the basement’s always been kept locked, it would be a waste of time for them to search down there. 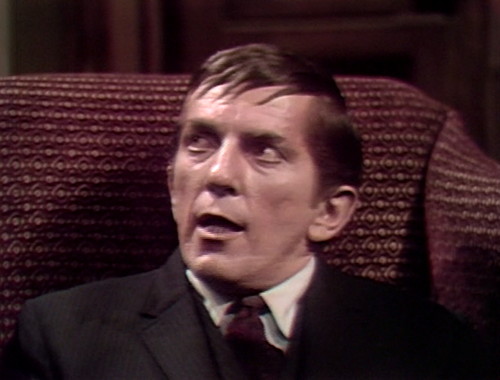 Delightfully, Barnabas’ nervousness is matched by Jonathan Frid’s shaky grasp on his dialogue. The result is a scene where the audience isn’t sure who to feel sorry for — the vulnerable character, or the struggling actor.

Patterson:  May we have the key, Mr. Collins?

Barnabas:  I lost it.

Barnabas:  Yes, I misplaced it. So you possibly… can’t get down through that door. 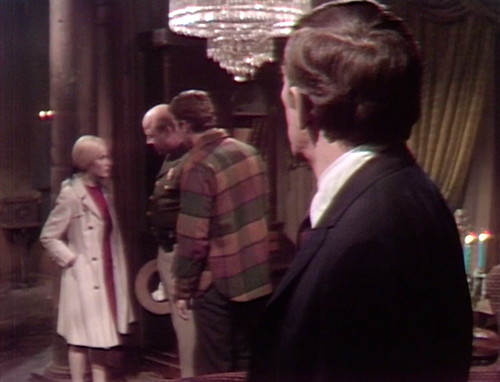 It looks bad for Barnabas, but suddenly Carolyn runs in, and tells the Sheriff that a woman reported seeing a young boy walking along the beach road just outside of town.

The guys take off, and the monster is saved. Hooray! 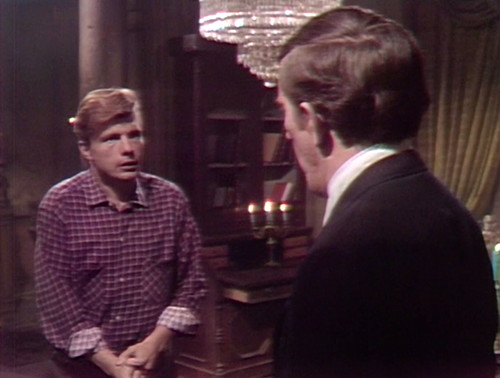 The Convenient R. crows for a second time. It’s been four minutes since his first crow; he must have hit the snooze button or something.

Barnabas needs to get downstairs to his coffin, but he instructs Willie to go out and search for David. If he can find the boy, he should bring him back here… and Barnabas will decide what to do next.

That’s right; we’ve got a real storyline at last. Stay tuned, this might actually be going somewhere.

On the terrace with Vicki and Joe, Barnabas blows through a couple of lines:

Barnabas:  Oh, not at all. I… only would do it… for your sake. (checks the teleprompter)  I can’t understand… why David has disappeared into the middle of the night.

When Joe and the Sheriff leave Collinwood, the music cue is played too early, and they have to play it twice to last until the end of the scene.

I quoted a few of Barnabas’ flubbed lines above, but there are plenty more in the Old House scenes, including:

“Willie’s right. Besides, why would he come finding her here?”

“I had no choice. You were making them suspicion as it was.” 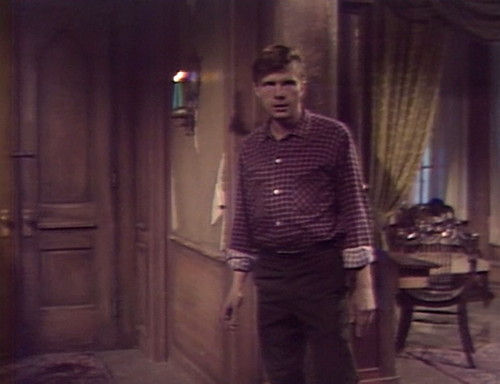