“It’s more than a little peculiar. I’d say it was very peculiar.”

Okay, let’s get started; it’s the middle of the night, and there’s a lot of plot mechanics to get through.

On Friday, Sarah the apparently-friendly ghost lured young David to the Eagle Hill cemetery for some kind of necromancy play-date. She disappeared, and he went looking for her in the secret room hidden in the Collins mausoleum. You know, like they always do on soap operas.

Meanwhile, Sarah’s vampire brother Barnabas and his blood-slave servant Willie are also looking for the little ghost, at her final resting place — the Collins mausoleum. Startled, David closes the door, and hides inside the coffin in the secret room.

The mausoleum is apparently empty when Barnabas enters, but he wants to check the secret room. Willie opens the panel.

Barnabas walks in and poses with his hand resting on the coffin, which is kind of superb. This is supposed to be high drama, but it’s actually a plot point from a farce, with everybody piling into the secret room. I’d give anything to have the Marx Brothers show up and start ordering hard-boiled eggs.

Okay, time for more plot mechanics. Barnabas tells Willie to shut the secret panel, so that David will know that there’s a way to open it from the inside.

There’s no logical reason for them to shut the panel, just to talk about Sarah for a minute and then open it up again, but we’ve left the world of logic behind.

Then we get our first look at Dark Shadows’ new Coffin-Cam™ technology, as David hides inside the coffin and tries to make like a corpse.

I’m not totally sure what that light source is that’s shining on David’s eyes. Barnabas and Willie are in a completely sealed stone room with no windows, and they don’t even have a flashlight. Within that room, David is inside a sealed wooden box, and somehow he’s managed to find his light. The kid’s a pro.

Barnabas tells Willie to open the secret door again. It turns out that if you want to open the panel from the inside, there’s a latch that’s hidden under one of the stone steps.

It doesn’t make a huge amount of sense why you’d need to hide the trigger for the exit door — if you’re already inside the secret room, then presumably there’s no reason to keep you from going outside again. But my mausoleum doesn’t even have a secret room, so what the hell do I know.

Now, I’m not as familiar with old-timey horror movies as I probably should be, so I’m not sure where they borrowed this bit of stagecraft from. My guess is that it’s probably lifted from House of Usher, a 1960 Vincent Price movie that includes a chained-up coffin. But I haven’t actually seen that film, so it might be from Tomb Raider for all I know. Willie might be getting experience points and health orbs every time he opens the door. 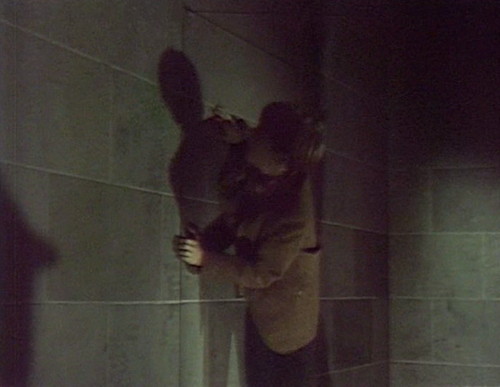 Anyway, they skedaddle, closing the door behind them and leaving David trapped. He couldn’t see where the latch was, so all he can do is run his fingers along the edge.

And there you go, we’re eight minutes in and that’s your plot for the rest of the week all taken care of. Four of the five episodes this week were written by Ron Sproat, who never passed up the chance to lock up a young woman or a child, and keep them locked up for as long as possible. Immure early and often, that was Sproat’s motto. 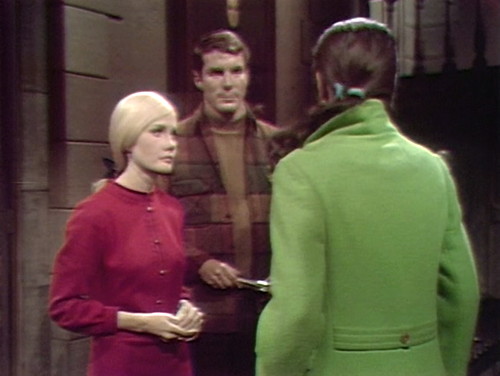 The key to a good Sproatnapping is having lots of recap scenes, with people worrying about the missing party.

Vicki comes back to Collinwood, and Carolyn and Joe fill her in on the search for David. They while away a few minutes with some overwrought dialogue, packed with dramatic clarification lines like, “We’ve got to find him, Vicki. We’ve just got to!”

Back in lockup, David hears “London Bridge” played on a recorder. He knows that Sarah must be nearby, and he calls to her: “Sarah? Is that you?” He looks around, frantic. “Why don’t you come?”

This brings up two important questions. Number one: Has David just figured out that Sarah’s a ghost? And number two: Why doesn’t she come?

You only need a moment’s reflection to realize that this storyline doesn’t make any sense. Sarah is a ghost. She brought him into this room last week. She can appear any time she wants to.

And it’s not like she doesn’t know that he’s trapped here. She was just outside with him ten minutes ago. Plus, this crypt is basically her house. So where is she now?

This scenario raises the uncomfortable possibility that Sarah has lured David here because she’s actively trying to starve him to death, so that he becomes her ghost playmate. At the moment, that is the only sensible interpretation of what’s going on. 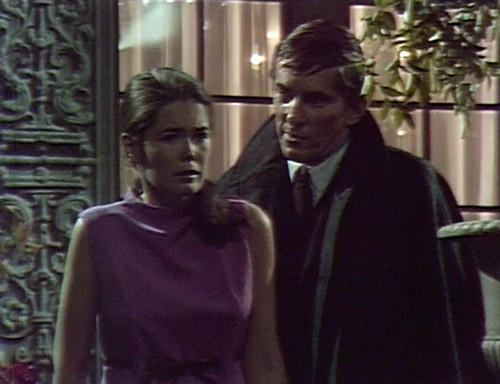 At Collinwood, Vicki goes out on the terrace to look off into the distance and have feelings. Carolyn and Joe left her behind so she could answer the phone in case the sheriff called, but that must have gotten boring because she’s wandered off.

Barnabas stops by, and Vicki tells him about David’s disappearance. She feels guilty and anxious, and she ends up sobbing on his shoulder. 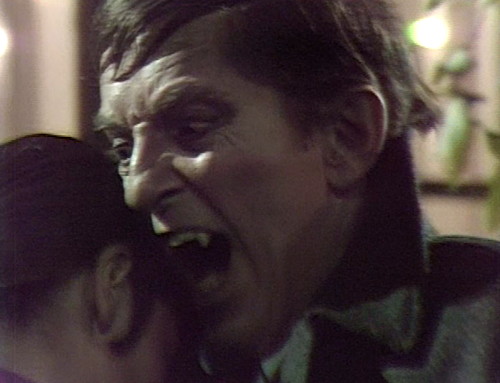 Barnabas holds her, soothing her as she cries. Then he apparently decides that this is an opportune time to feast on the blood of the innocent, so he gets his fangs out.

It’s not super clear why he should lose his shit all of a sudden, but the show needs something exciting to happen every twenty-five minutes, and this is it.

When Willie and Barnabas leave the secret room, Willie bumps his head on the top of the doorframe.

As Willie closes the secret panel, it bounces open again, and then quickly slams shut.

Joe steps on Carolyn’s line when they’re talking in the drawing room:

Carolyn:  I knew he wanted to go out.

Carolyn:  I should have kept an eye on him every minute.

Joe:  If anybody’s responsible, it’s me.

When they’re searching the woods, Carolyn gets Joe’s name mixed up:

Barnabas wears his ring on his right hand in the mausoleum scenes. At the end of the episode, he switches his ring to his left hand, so he can pose by the terrace gate with his ring in the camera’s view.