“I think I see something… A shape! And I know what it means!”

Willie’s up on a ladder, cleaning the chandelier in the Old House drawing room, when he suddenly sees someone standing at the window. He rushes to the window, shouting, “Hey! Hey, you!”

Then he bolts outside, calling, “Where are ya?”

Roused by the clamor, Barnabas follows him outside.

Barnabas:  Willie, who are you shouting at?

Willie:  Her! Sarah! She was standing right here, at the window.

Willie:  I know! When I shouted at her, she disappeared!

That gets a little “surprise” dramatic sting, which leads into the opening titles. Except how much of a surprise could it be, when everyone in the scene already knows that Sarah is a ghost? Of course she disappeared. Did you think you’d find her crouching behind a tree? That’s not how ghosts work.

But that’s the problem, really. Sarah has suddenly become the most important character on the show — the only character who can move the plot forward another step — and they still haven’t figured out what she wants.

So Barnabas and Willie have another conversation about her, and all they can do is ask questions.

Barnabas:  She wouldn’t do anything to harm me. She was devoted to me, as I was to her.

Willie:  Then why won’t she come to ya? Why does she disappear every time you’re nearby, if she loves ya so much?

And, yeah. That’s the thing. We don’t know either. I’m pretty sure nobody does. 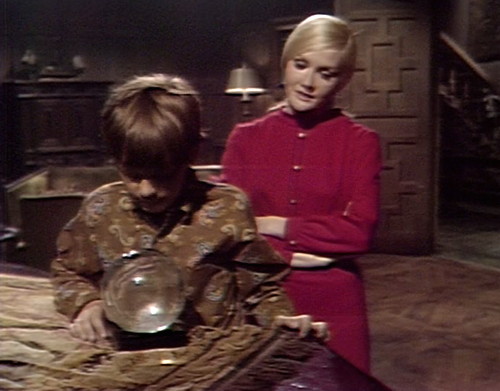 So every storyline screeches to a halt, because the only thing anybody wants to do is find Sarah. David even digs out his crystal ball, which is left over from a story they did a year ago.

David has decided that he’ll be able to find Sarah if he looks into the crystal, although as far as I know, he doesn’t realize that she’s a ghost. He thinks she’s just a weird kid who knows a lot of secrets. It doesn’t really make sense that he would try to use supernatural powers to find his friend.

But the concept of “Sarah” is so fluid right now that they can say just about anything. It turns out that he does see something — or at least, he says that he does — and now he knows where Sarah is. We find out by the end of the episode that he’s talking about the secret room in the Collins family crypt, where Sarah brought him on Monday.

So it’s possible that David didn’t really see anything in the crystal ball; he’s just going to the last place that he saw her. Or maybe she really did send him some kind of psychic ghost message through the crystal ball. We haven’t seen her doing anything remotely like that so far, but who knows? It’s Sarah. There are no rules.

So it just goes on like this, for scene after scene. Joe comes over to Collinwood and asks if David can help him find Sarah. Then back to the Old House, where Barnabas tells Willie that he wants to go look for Sarah. David sneaks out of the house and goes to the cemetery. Then back to Carolyn and Joe, and after that, Barnabas and Willie.

Unfortunately, the Dark Shadows budget can only accommodate five or six actors in each episode. But you get the feeling that if they’d had enough money, they would have had the entire cast standing around in twos and threes, all in different locations, and all wondering where Sarah could be. Maybe with a montage, and calendar pages flipping by — May! June! July!

So let’s get to the real point of today’s episode, which is some good old-fashioned child endangerment.

David finds Sarah at the Eagle Hill cemetery, and he asks her to come back with him to Collinwood. All she wants to do is play catch. He agrees to play with her for a minute, but then she has to come with him.

She fakes him out, throwing the ball into the shrubbery — and when he turns around to find it, she disappears.

Frustrated, David goes into the mausoleum to look for her, and he opens the panel to the secret room.

And then guess who shows up — Barnabas and Willie, who are also hoping to find Sarah there.

Apparently, Sarah has spent the entire episode planning this specific scenario. She appeared to Willie, so that Barnabas would come looking for her, and she sent a psychic ghost message to David’s crystal ball.

Now that everyone’s showed up, she disappears, and leaves them to fend for themselves. Why? Because she’s a ghost, that’s why. Apparently, that’s how ghosts are.

Monday: A Tomb of One’s Own.

David:  I can go there myself…

Joe:  Would you do that, Davey?

David repeats a line when he meets Sarah:

Joe:  He shouldn’t be out by himself after dark.

Joe:  All right now, there’s nothing to be afraid of. We don’t even know for sure that David left the house.

Carolyn:  I have a feeling he did.

Finally, this isn’t a blooper, just an odd moment: when David is looking into his crystal ball in the drawing room, Carolyn walks in and tells him, “Mrs. Johnson says your dinner’s almost ready. You’d better get washed up.” Does David have a separate eating schedule from everyone else?

David’s crystal ball was first seen in August 1966, when Burke gave it to him as a present. In September, David uses the crystal ball to predict that Carolyn would never marry Joe, and that someone at Collinwood was trying to kill Vicki. He tries to solve the mystery of Bill Malloy’s death with the crystal ball in October, and pretends to look for the missing Vicki. In November, he uses it to look for ghosts. It’s seen in the background in David’s room in a couple episodes, most recently in January 1967.

The prop is forgotten after today’s episode, and we don’t see it again until March 1969, when it’s used by Magda, the gypsy fortune teller.

Monday: A Tomb of One’s Own.